I talk a lot about the fundamentals of marksmanship and how they are the building blocks to all great shooting. When we break them down into a logical order, they address the core elements of a shot. From our body position to our sights, the fundamentals guide us towards a better result, in other words, hitting the target.

The Fundamentals of Marksmanship

When addressing the rifle we look at Natural Point of Aim, rifle pointed to the target with the body pointed to the rifle. Sight picture has become modified when using a scope from sight picture and sight alignment to aiming. Granted we still have sight alignment, our eye relief, and sight picture is about edge to edge clarity behind the ocular. However, these actions are not part of the shot sequence because the scope should be set up ahead of time. When using a rifle scope it’s more about aiming, unlike iron sights.

Once our body position is established, it’s about the firing sequence. In the past, we would tell the shooter to control their breathing giving it that slight pause before breaking the shot. Today we look at the natural respiratory pause, breaking at the bottom of our exhale while avoiding the urge to hold your breath. Think about this, movement, going from Point A to Point B quickly which increases our heart rate and breathing. The worst thing you can do under these elevated conditions is to hold your breath. So we breathe through and merely break the bottom of our natural respiratory cycle. Trust me you have no concept of time under these conditions so don’t attempt to hold your breath.

So while ignoring our breathing, we want to begin to take up the trigger without moving the sights off target. Trigger control or the manipulation of the trigger without disturbing the lay of the sights, which sounds easy, but it’s our most significant point of error. We combine trigger control with follow through, the act of physically and mentally holding the shot on target. In our mind’s eye, we want to follow the bullet to the target until the recoil pulse has subsided. How we do that, is physically staying engaged with the sights on the targets. 100% of your focus should be on the target/reticle relationship during this sequence. Once the recoil pulse has ended and we have observed the results of our shot downrange, we can then run the bolt for the next round.

These are the fundamentals of marksmanship as needed to engage targets at a distance successfully.

But there is more; today we shoot slightly different than the originators of the fundamentals. They were a sling or unsupported shooters. While various front rests existed, the technique did not change much when using one.

For the modern shooter, a solid front rest is the most common way to engage targets. We use bipods which mean we have to modify our body position in a way to allow the shooter the ability to see the results of the shot. No longer do we rely on the spotter to do the heavy lifting. Back in my Sniper School days, the Spotter was the Senior Marine who guided the trigger monkey on target and established the variables for the engagement. In other words, all the shooter does is follow directions and press the trigger without disturbing the lay of the sights. Today, we have learned that recoil management is an essential element related to the Fundamentals.

Recoil management tells the bullet where the barrel is when leaving the bore. It controls your zero. How you are positioned behind the rifle, once it fires, there is time between the primer strike and the exiting of the bullet. During this short period, new shooters tend to move causing deviations in the position of the barrel. The more influence at the back of the rifle, the increased movement at the front. If we are consistent, as in we shoot a group, it’s our job to adjust the sights to center the group around our aiming point. This recoil management is why your zero is different than your buddies; each person is addressing the rifle in a slightly different way; hence the recoil management changes.

Today the military addresses recoil management as part of the firing task the same as follow through. However, recoil management starts during the beginning phases of the shot sequence. We want to load the bipod or stack our weight behind the rifle eliminating angles during NPA. Then, when the shot breaks we ride the rifle through recoil maintaining our sight picture and our reticle’s relationship with the target. This is the part of recoil management that works with Follow Through. 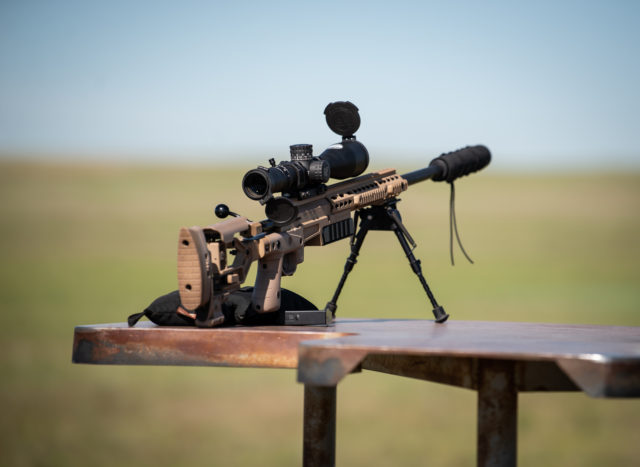 Loading the bipod is often misunderstood. People think it’s about pushing the rifle forward with the shoulders. This is incorrect; you are loading the bipod from the core, our hips. It’s not about pressure, but more about dead weight giving the rifle a slab of meat to recoil against. It’s also bipod dependent as you are merely taking the slack out of the system.

A Harris bipod, one of the most common on the market has very little to no perceived movement in the legs. We load a Harris using one technique, where an Atlas Bipod has slack in the legs and movement. That requires are a different technique. The Harris is more of a rise with a knuckle under with the rubber feet. We do not push any bipod forward, but rather bring the rifle back into our shoulder pocket and move our core up. It’s a pinching method of holding the stock between the bipod and body.

The Atlas comes back into our shoulder pocket, then operating as one unit, we remove the slack from the legs using our core weight to hold it. This way, when the rifle recoils, it just flexes on the slack of the legs. About a 1/4″ of movement. Once the recoil pulse has ended, the rifle will return to the original starting point.

This works in alternate positions too when we are not even using a bipod. Take a barricade drill as an example. How you position your body and stack your weight behind the rifle. We want our shoulders square and in front of our hips and the rifle held into the shoulder pocket. Picture the prone body position and translate that same upper chest and head location to other positions.

Recoil management is every bit of a fundamental as the fundamentals themselves. We can spot our own shots; we stay engaged with our targets and can quickly follow up and fix a miss without assistance. Seeing is essential, the more we can see, the more we can locate, close with and engage. It’s about being our own spotter, and not taking our most senior member out of the fight. Two guns are always better than one.

Sniper’s Hide has a robust online training section in the forum. I have over 45 minutes of video breaking down recoil management under a variety of conditions. From prone to shooting off a bench, the way you position yourself behind the rifle matters. I have found that you can see as much as a 20fps difference in muzzle velocity by just mismanaging the recoil management. Yes, you read that correctly, your muzzle velocity can and will change based on your position and how you manage the rifle. It’s a critical element and needs to be understood.

Some ranges only let you shoot off a bench, but many of the competitions we participate in are either prone or a variety of alternate positions. When putting a new shooter on a bench, we turn them around and square them up. The benches that force you to sit sideways and bladed are a no-go for us right from the start. Turn that bench around and sit square. Being up tall and bladed will push you off balance and bleed velocity off compared to the prone position.

It’s important to understand the type of shooting you are engaged in, the discipline. Each discipline has its little variations. I would not preach recoil management to the Benchrest crowd, but that is my specialty.

The best advice I can give the new shooter reading this is to relax behind the rifle. You need to be a slab of dead meat and not to push or to hold tension in your shoulders. We used to read about guys trying to practice recoil management based on the written word many will complain about the bipods rolling or creeping forward. That tells me you are using your shoulders and not your core weight. It’s about sliding that belt line forward about a 1/2″. Next, make sure you are not unloading the bipod by reversing the order. Guys will move forward first and pull back into the shoulder pocket second. This unloads the bipod.

Bipods don’t hop, there is no “UP” component, that comes from the stock bouncing off the shooter. The bullet goes one way, the recoil goes the other way and like electricity that recoil will follow the path of least resistance. If you feel you are straight and square behind the rifle and the system is still jumping to the side, consider that your 6 O’Clock hold might not be right for you. Instead, the stock might need to be closer to 7 O’Clock on your body versus that 6 O’Clock hold. A Harris is generally the worse offender when it comes to the rifle jumping the side. Be sure to come one notch up on the legs to remove the spring from the system and check square. It’s a more difficult method to start with it because a Harris is so ridged.

Trigger control, follow through, also contribute to the movement of the system. If you are tapping the trigger, or not following through, you are adding motion to a process where no movement is required.

Recoil Management is an integral part of driving the rifle correctly. The Fundamentals of Marksmanship are the foundations for all great shooting. We combine the two as part of one action, execution of the firing task. The rifle will recoil in a straight line; the scope will be zeroed to the rifle and not to the shooter’s bad body position. It’s all about consistency, doing the same thing the same way for every shot.

I have mentioned it several times; recoil management is not just part of the prone position. It’s an element of your body position regardless. Get aggressive, place your shoulders over and in front of your hips and secure the rifle in the shoulder pocket. Think of a lean more so than a push.

Don’t start playing the game of Telephone; this is from the horse’s mouth as we wrote the book on this element of precision rifle shooting. A little bit goes a long way and its all about taking the slack out of the system.

L
Frank Galli
I am a new shooter. Need some advise on position and principles of prone ling range accuracy. Currently have a browning long range 6.5 creedmore. Have access to range that has 300 yrds. Plan to get into loading a few months. Please email me if you have time. Thank you