We are the battling bastards of Bataan;

No mama, no papa, no Uncle Sam;

No aunts, no uncles, no cousins, no nieces;

No pills, no planes, no artillery pieces.

And nobody gives a damn.

And nobody gives a damn.

Well I did it. My first Marathon. It was a pretty moving weekend for me as my Great Uncle suffered the Bataan Death March and ultimately died in a Japanese POW camp and is interred in the Philippines.

This isn’t your typical road marathon as it has some pretty brutal elevation change, wind, temperatures and sand. The first eight miles were pretty easy, but then we encountered roughly 1,200 feet of elevation change over the next six to seven miles. Followed by another six to seven miles of brutal decent. After solving those two problems the 6” deep sand kicks in and lasts for about 1.5 miles uphill again. The final five miles we suffered a 15 mph headwind in past years it has been as high as 40 mph so we were pretty lucky.

In the end I was able to shake the hands of 11 Bataan survivors at the finish line which really gave me perspective, no matter how bad I felt, thinking of those that lived it made me man up and quit my whining.

Next years race is 17 March and I'll be back and better prepared for sure! 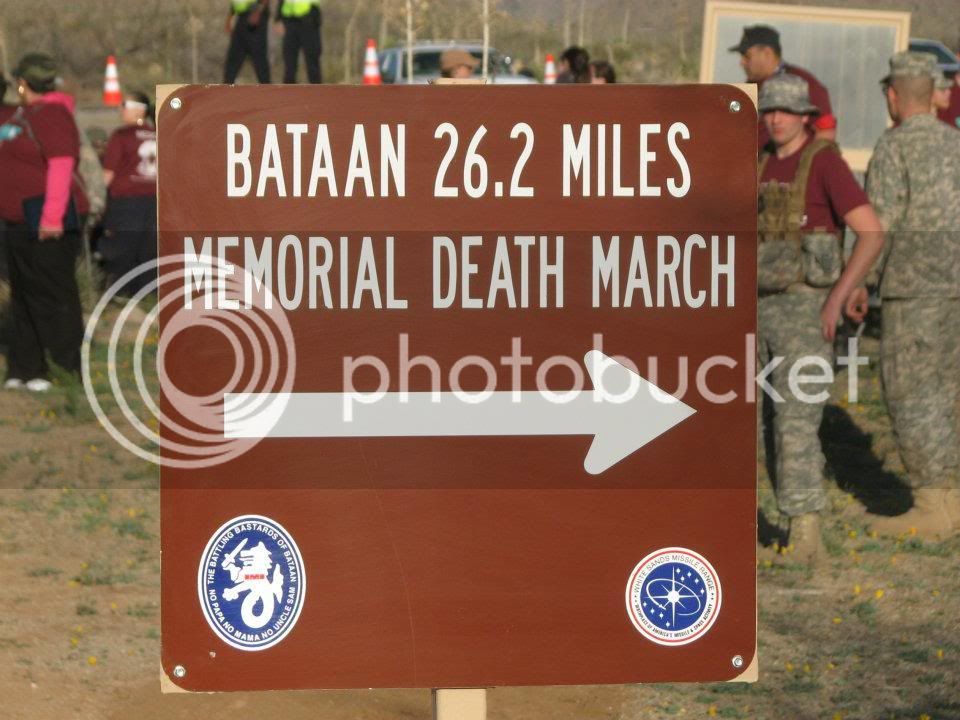 Great Job. That is awesome. My uncle Jess did it last year for his first marathon. He is 67.
F

That is wonderful. We just lost our city's Bataan survivor. A great person, worked hard for everybody and the city. Hated the "Japs". Wasn't any forgiveness in him for that atrocity.
F


SP Sr.,
congratulations on your finish!!

Done a couple of those "marches." They are a butt-kicker!!

I can only imagine what those guys in WWII went through.

Kudos to all who have done it and will do it.

Just thought this merited a re-post... A bit late, but, hey. Worth the read.