Williams' foundation announced on Twitter and Facebook that he died at the Veterans Affairs medical center bearing his name in Huntington.

“Today, America lost not just a valiant Marine and a Medal of Honor recipient, but an important link to our Nation’s fight against tyranny in the Second World War,” U.S. Defense Secretary Lloyd Austin said in a statement. “I hope every American will pause to reflect on his service and that of an entire generation that sacrificed so much to defend the cause of freedom and democracy.”

As a young Marine corporal, Williams went ahead of his unit during the Battle of Iwo Jima in the Pacific Ocean in February 1945 and eliminated a series of Japanese machine gun positions.

Later that year, at age 22, Williams received the Medal of Honor, the nation’s highest award for military valor, from President Harry Truman at the White House. 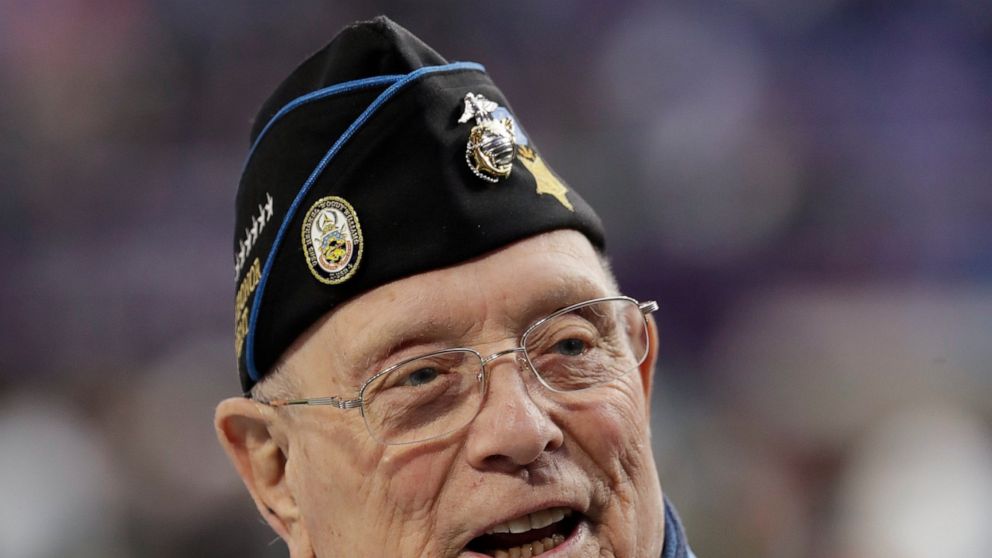 The world is a lesser place...

I was just going to start a thread on him... glad to see you beat me to it... as God knows he deserves the utmost respect. 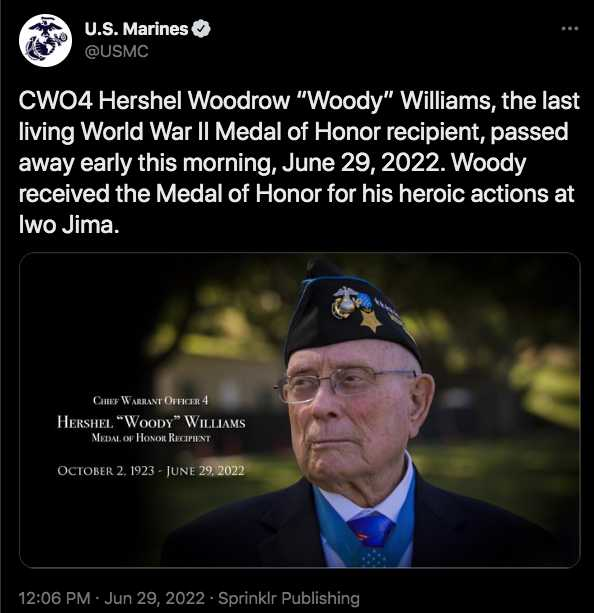 Won't be a word said on the propoganda programming. God bless men like him past and present.
Reactions: TACC and Samuel Whittemore

Whar'd all that dust come from. RIP, you earned t several times over.
Reactions: Slash0311 and TACC

He will be telling St. Peter at the gates he has spent his time in hell already.
Reactions: Slash0311
B

God speed. May you rest in peace. Prayers for a life that was honorable.

ggmanning said:
Won't be a word said on the propoganda programming. God bless men like him past and present.
Click to expand...

And Future. Because somehow I think there are going to be a few more in the years ahead.

Another Marine reporting sir, he did his time in hell.

Here's the Medal of Honor citation from his web page:

For conspicuous gallantry and intrepidity at the risk of his life above and beyond the call of duty as demolition sergeant serving with the 21st Marines, 3d Marine Division, in action against enemy Japanese forces on Iwo Jima, Volcano Islands, 23 February 1945. Quick to volunteer his services when our tanks were maneuvering vainly to open a lane for the infantry through the network of reinforced concrete pillboxes, buried mines, and black volcanic sands, Cpl. Williams daringly went forward alone to attempt the reduction of devastating machinegun fire from the unyielding positions. Covered only by 4 riflemen, he fought desperately for 4 hours under terrific enemy small-arms fire and repeatedly returned to his own lines to prepare demolition charges and obtain serviced flamethrowers, struggling back, frequently to the rear of hostile emplacements, to wipe out 1 position after another. On 1 occasion, he daringly mounted a pillbox to insert the nozzle of his flamethrower through the air vent, killing the occupants and silencing the gun; on another he grimly charged enemy riflemen who attempted to stop him with bayonets and destroyed them with a burst of flame from his weapon. His unyielding determination and extraordinary heroism in the face of ruthless enemy resistance were directly instrumental in neutralizing one of the most fanatically defended Japanese strong points encountered by his regiment and aided vitally in enabling his company to reach its objective.

Cpl. Williams' aggressive fighting spirit and valiant devotion to duty throughout this fiercely contested action sustain and enhance the highest traditions of the U.S. Naval Service.

Semper Fidelis.
Reactions: sgtsmmiii, Slash0311, Lapuapalooza and 2 others
Show hidden low quality content
You must log in or register to reply here.