Recently, the Montana Rifle and Pistol Association (MRPA) hosted the Northern Rockies Long Range and F-Class Tournament. The match was a sell out with a total of 75 shooters, with 32 F-Classers and the remainder in the sling division. There were civilians from 17 states, Canada and Sweden, as well as numerous shooters from several military teams. The Montana Army and Air National Guard was well represented with 13 competitors, the All National Guard Marksmanship Team sent 8 of their finest shooters, and the USMC-R and USAR also sent competitors.

The Northern Rockies Tournament was held at the beautiful Deep Creek Rifle Range, a few minutes outside of Missoula, MT. The range is located in the mountains and normally provides fantastic shooting conditions as evidenced by the amount of NRA National Records established at the range. However, the weather turned out to be not so favorable for this tournament with unusual strong winds and rain hammering the area. While the range escaped the much of the area’s rain and snow, the wind certainly was a larger than normal factor.

Thursday, on the way to the tournament


[size=+2]Friday-Four Man Team Match [/size]
Shooting got under way on Friday with 14 teams competing, firing at 800-900-1000yds. The first place team in F-Class was a F-TR team composed of 2 Montanans, Mike Anderson and Andrew McLain, and 2 Idahoans, David Kynoch and Mark Frisbey. McLain, a newer junior shooter from the Helena, MT area, was a last minute substitute on the winning team. McLain performed very well in the team match and went on to have a great weekend in the individual matches – more on that later.
The Sling Division was closely contested and the All National Guard Marksmanship Team “All Guard D12” came out on top with Garey Diefenderfer, John Coggshall, Leigh Jenks and Stuart Mackey barely edging out Team “Can-Am”, made up of several Canadians and the Washington’s “30 Cal Gal.”
If you ever have the chance to shoot in a team match, go for it, they are a lot of fun and they help you become a better shooter and wind doper from the experience. 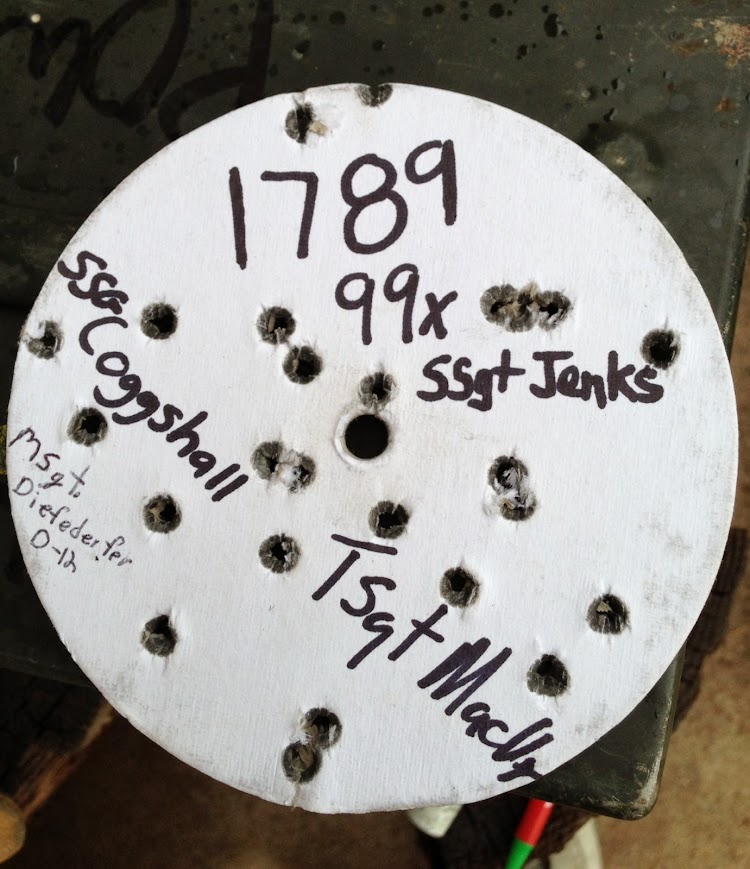 [size=+2]Individual Matches[/size]
The original Course of Fire for the weekend was supposed to continue with the Palma format at 800-900-1000yds for Saturday and Sunday, but due to the severity of the weather, the jury elected to continue with the matches, but fire them all from the 1000yd line under overhead cover.
In the F-Open Division, John Bruce ran away with the lead on the first and second days, and won the Regional Gold Medal for his second time. In the heavily contested F-TR Division, it was a close race each of the days and for the final championship. After 60 rounds for record on the first day, 3 points separated 1st to 3rd, with the junior, McLain coming in a surprising third place. As day two wrapped up, it remained very close with 2 previous regional champions and McLain battling it out of the overall F-TR title. In the end, it was McLain coming out on top in only his second long range F-Class match! Not only did McLain take the win, he also has a pending NRA national record now in the junior category! McLain has been mentored by LTC Donald Erpenbach, who is an avid long range hunter. Interestingly, McLain used the same rifle that Erpenbach used in 2012, when Erpenbach established his own National Record (a fine shooting Savage!)


In the sling division, MSGT Garey Diefenderfer took the individual overall win after both days. He barely edged out John Van Santford by 6 tie breaking X’s, as they both fired the same score after 100 rounds for record. A total of two points and some X’s separated 1st from 4th place - it was a tightly contested tournament. 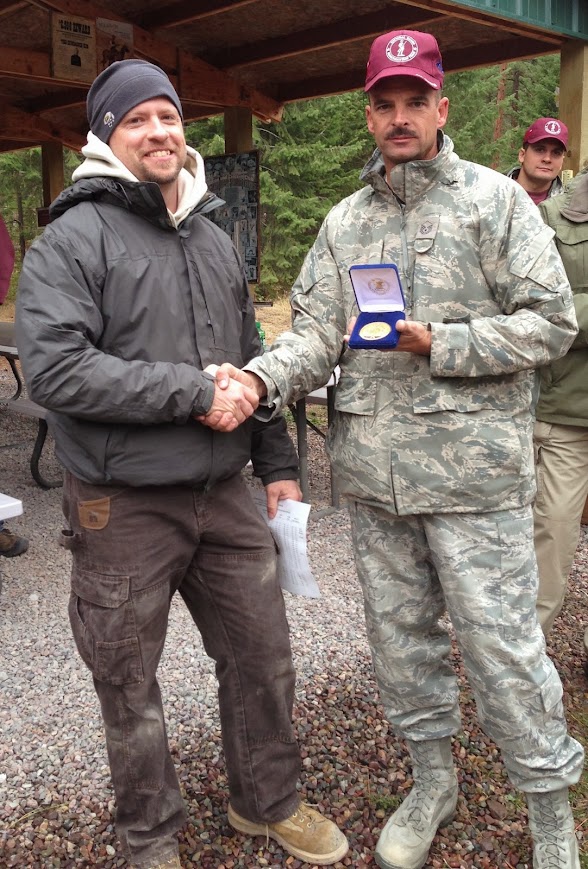 
[size=+2]Top Montana National Guard Competitor[/size]
There was another hotly contested match going on within the F-TR division. The Montana Rifle and Pistol Association established another category for the Top Montana National Guard Competitor. To be eligible, the individual must be a member of the MT Air or Army National Guard, and use an issue weapon and ammo. The majority of the competitors were made up of the HHC 1-163rd Sniper Section. The Sniper section used M24’s as well as KAC M110’s. The competitiveness among the shooters was noticeable and in the end, SGT Hank Hannah took top honors as well as an awesome prize donated by USTacticalSupply.com. The prize was an autographed and framed print by artist Dick Kramer. The monetary awards won by individual members of the sniper section will go towards purchasing them needed gear to support their mission. 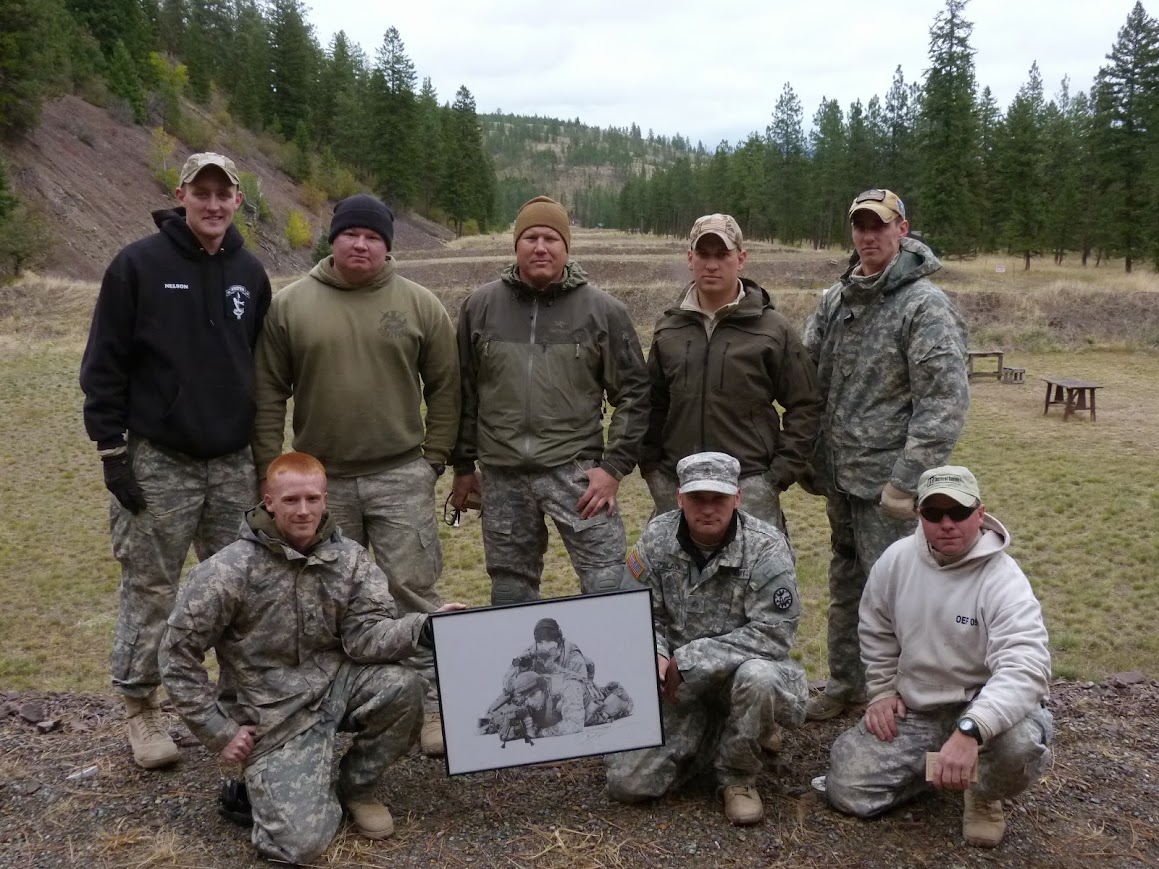 
[size=+2]Summary[/size]
While conditions were less than ideal, some shooters posted outstanding scores and the challenging conditions showed who was better at reading the wind. Often times at this tournament, it is a contest of who can hold the hardest, but this time the wind was a large factor and really posed a difficult obstacle. Those firing 7.62 from 20" and 22" barreled rifles in the Service Rifle division (Sling M110's and M14's) and the Sniper Section members (F-TR M110’s) had a good workout spinning their windage knobs. 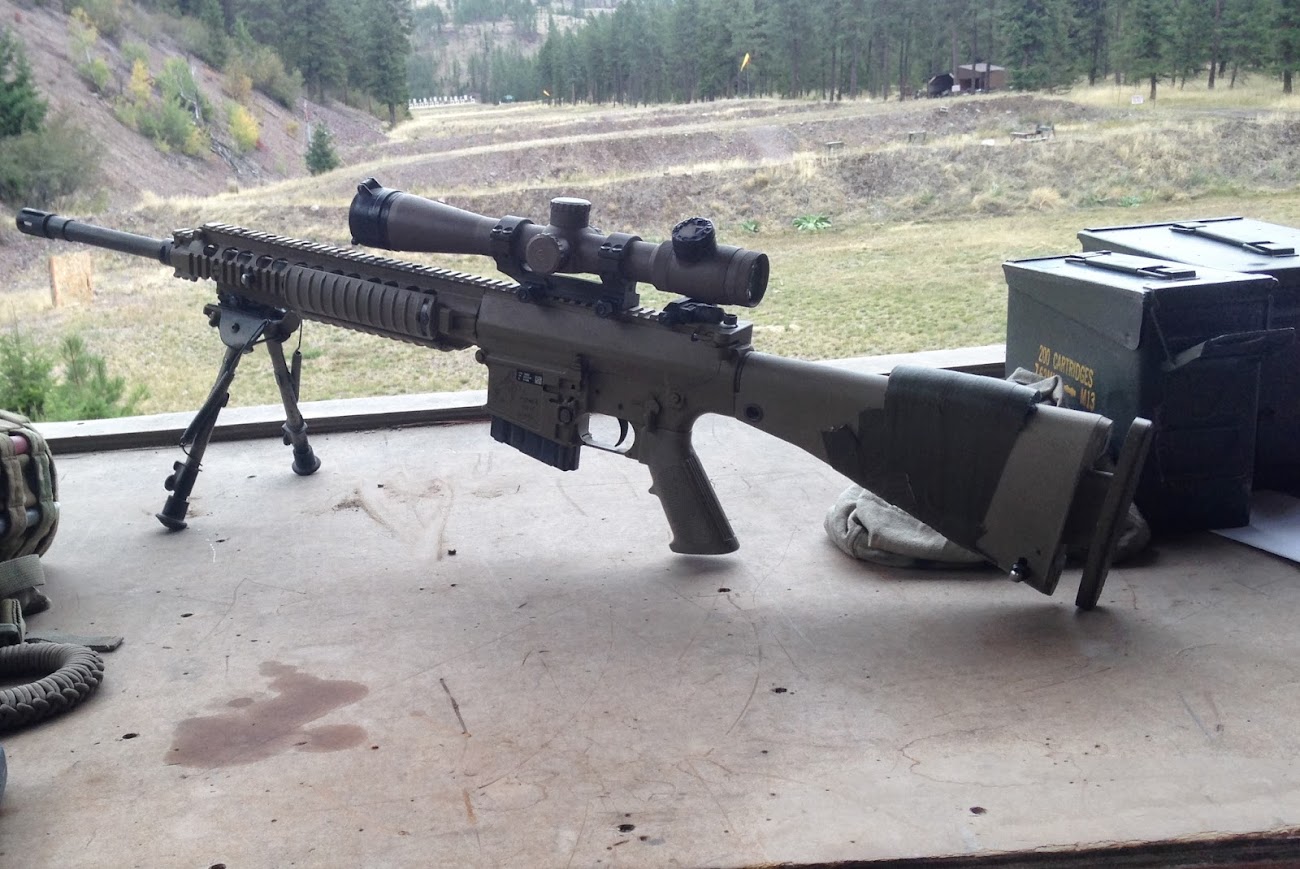 McLain’s pending NRA National Record is the 9th national record in 4 years at the tournament. The tournament as been sold out each of the last four years and each time the waiting list is growing longer. For 2014, we are going to break this regional tournament into two weekends, one for Sling shooters and one for F-class shooters. If you are interested in attending the tournament in 2014, you need to get on the email list for future registration info. Contact us at: [email protected] for more info on future matches and to be put on the email list.

Lastly, the MRPA wishes to thank all the generous sponsors that help in our efforts to promote marksmanship. There were many terrific donations by sponsors including: Savage Rifles donating a rifle, Stiller actions provided an action and several barrel makers were generous in donating barrels to the prize table. 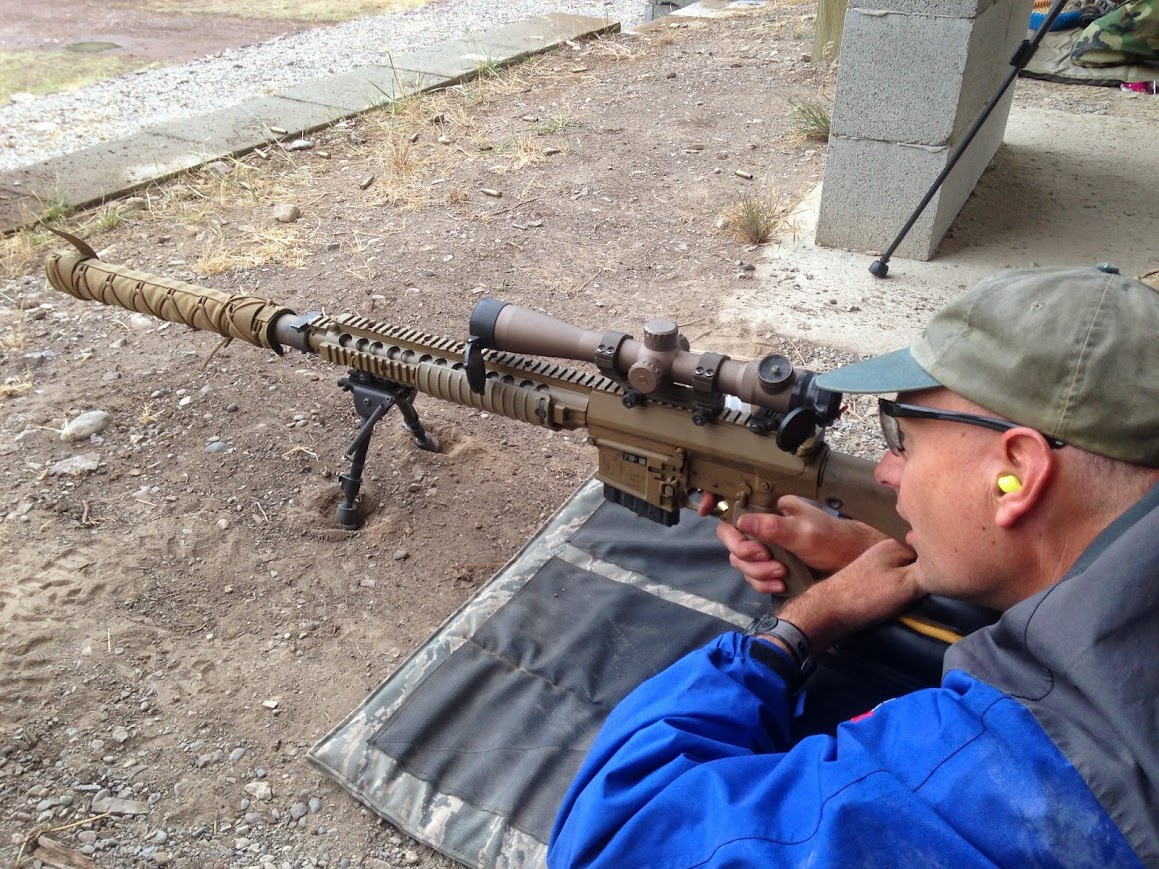 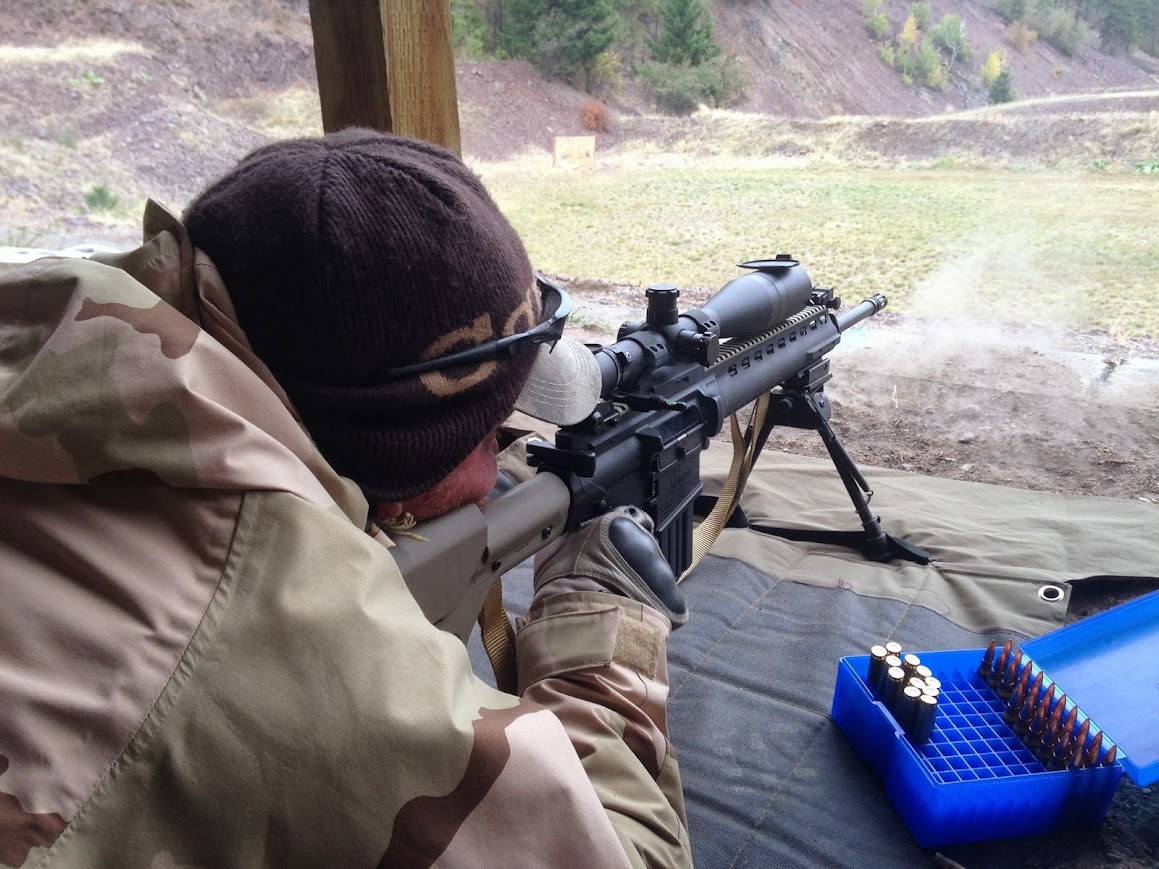 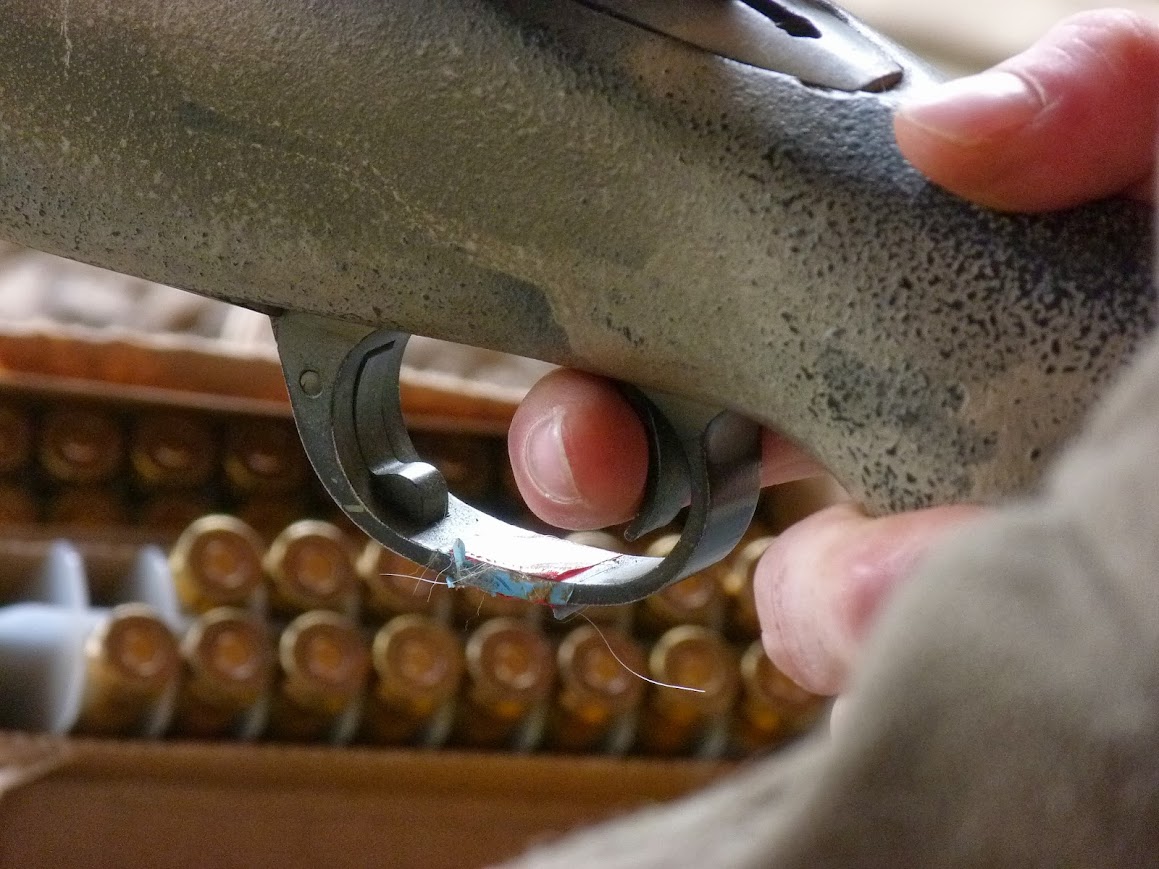 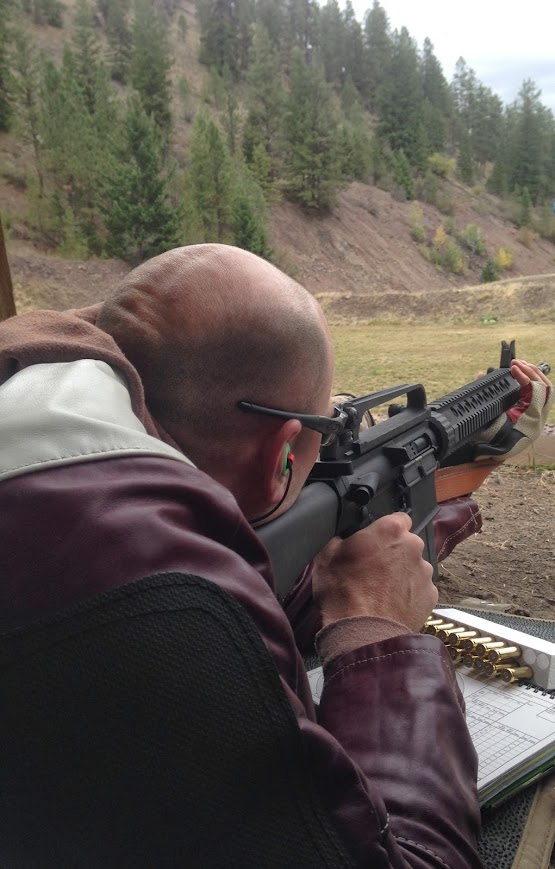 And service rifle goes to...
I know I know, it's an Fclass forum...

Excellent match as always, and worth the trip to anyone thinking about attending. Thank you again to Jamey and all the great people that put it all together. It was tough this year. Probably the most difficult LR /1000 yd conditions I have seen. Switchy is a nice way to put it.
J

Hopefully, we will be back to T-shirt weather again!

No love for Service rifle around here...

I don't know if I believe there is such a thing as Tshirt weather up there... First thing I did after the team match was hit Walmart and buy long johns...

Great Range , Great Match, always one I look forward to each year. I actually enjoyed the conditions ... challenging is more fun. Always some impressive shooters show up for this one. Worth the trip/travel/etc if your considering it. Contact Jamie early for a spot though, it fills up quick.
C

your lucky to have something like that out there..Looks like a lot of fun..Thanks so much for sharing it with us..And have a wonderful and safe holiday...God Bless America..
2

Great range to shoot even with some weather. I'm looking forward to next year with the growing crowd!

can someone PM me the sight. ID Drive out there.

esromvre said:
can someone PM me the sight. ID Drive out there.
Click to expand...

USMC gets behind "action shooting" including tactical LR matches

What can competitive shooters and snipers learn from each other?