NFL to Earl Bennett: You wear orange shoes, you ge 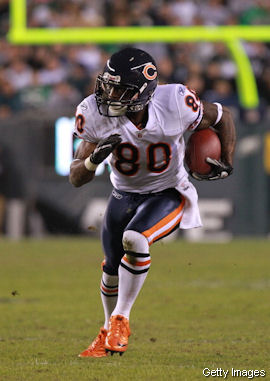 NFL to Earl Bennett: You wear orange shoes, you get thrown out


The saga of Earl Bennett(notes) and his orange shoes will likely come to an end today, because the league has gone total jerkface about it. It's not just a fine Bennett would be facing this time. From Will Brinson at CBS:


According to CBS Sports' Charley Casserly, if Bennett wears the orange shoes on Sunday, he'll be fined another $15,000. And he'll be removed from the game until he changes.

"The NFL told me they called the Bears this week and told them this: if Bennett wears the shoes today during the game, he will be fined a minimum of $15,000," Casserly said on The NFL Today. "But more importantly, he will be removed from the game and he will not be allowed to go back into the game until he has the proper footwear on."

<span style="color: #FF0000">I love that this is the rules violation the NFL gets really serious about. A blatant, intentional helmet-to-helmet hit won't get a guy thrown out. You can cut the knees of an engaged blocker all day long, and you probably won't even be penalized. You can do whatever it was that Jerome Simpson did, and you're good to go.

Wrong color shoes, though? You are not welcome on our field, sir. </span>