East side of Ohio

We got the August match in with pretty decent weather. Rained a bit on Sunday although initially it was supposed to be nice all three days. Wind held pretty calm which made for some nice scores. Had a few new shooters and less locals shoot this month, some traveled nearly two and a half hours to come and try out my little match in the wooded valley.

I kept the two KYL stages, I think it adds a bit of challenge and gives the shooter more control over how they shoot the match. The two 10 shot racks at 50 and 197 yards are decreasing size circles. If they get the first five targets they are safe. If they miss one of them they start over at number 1 until they shoot all 10 shots. If they it the first five they are safe and the second half is a second KYL set. The 10th target at 50 yards is a 1/4" circle and the 10th target at 197 yards is a 1 inch circle. Gotta know you limits or you may suffer the consequences. Makes ya think.

I still allow Peep sight shooters to compete directly with the scoped competitors, targets start out smaller for the Peep guys and they don't have as many options for bonuses as the scoped guns. Same goes for the Peep guns with the KYL racks, if they miss they have to start over. Targets get greyed out, sunlight/shadows mess with them thru the day. After about 60 rounds eye strain gets really bad. I feel it's pretty close match over all, come give it a try sometime. Peep guns have a 4moa target at each stage which look like pin pricks thru a peep sight aperature.

At my matches I've always felt there are easily 10 or more shooters that can win the match. Weather conditions and ammo craziness are always in play. Even the best shooter can have a bad streak of luck with ammo or a few misjudged wind call and you'll find yourself a few targets down and wondering what happened. Was it ammo, dirty gun, wind, bad setup or just plain you sucked on that shot. Frustrating but that's part of this rimfire game, We don't chase ammo lots, we just shoot SK Biathlon and live with whatever it gives us. We'll not be top dogs but hope for that bad round is on a big target and not a smaller critical one. Yee Haw, this is fun.

On to the scores, placement is decided by reverse count. This months bonus stage is one I've done before but it's easy to forget how hard it is although it looks easy. Shooter could not use a rear rest, they had to only shoulder it and could not use their free hand to support the rear stock against the table. They had a choice of either my bigger bell (cut off oxygen tank) that rings nice when hit of a steel clay pigeon at 195 yards. Bell was worth one point and clay pigeon was worth two points.

When the shooter acquired the target and was ready I lowered a piece of paper down in front of the scope/target blocking their view and started the timer counting down 10 seconds. At the buzzer they touch off the shot while still blocked. A good test of how well a shooter can maintain their hold. 10 seconds is a LONG time while trying to hold the position on a distant target. Might not be practical but I try to come up with something a bit different for a final stage to keep the fun in a match.

There was a tie for first place, by reverse count the hit on a clay pigeon by Chris put him in first place with Casey missing both bonus shots. Casey shot extremely well with his Vudoo, I think I heard him mention using a 12 twist barrel, whatever it was it sure put good groups downrange. More and more of the higher end guns are being used but the older target guns can still be competitive if you find the right ammo that makes it happy. Casey will get a free entry at his next match, good job. 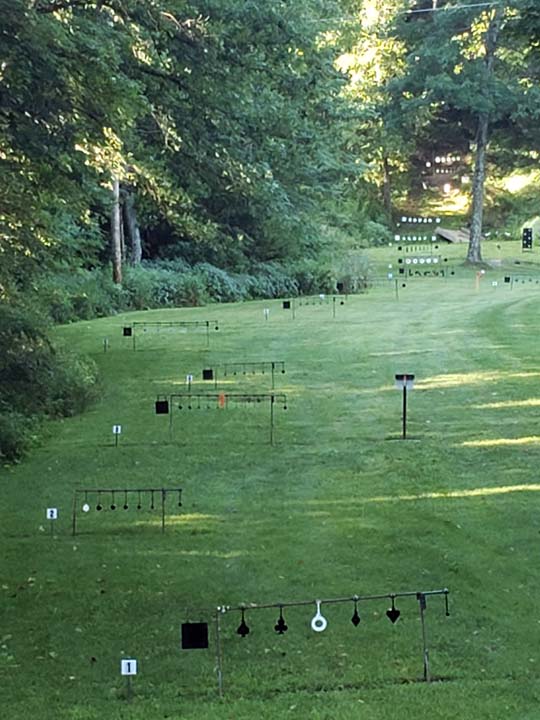