Anybody tried on of these? How does it compare to the M1A Scout? 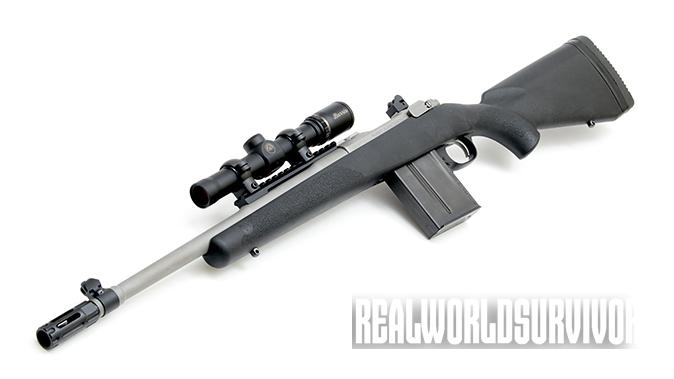 They don't seem very comparable, one is a heavy semi-auto and the other is fairly light bolt action, so I'm callin apples and oranges on this one. That being said, I've owned two Ruger GSR rifles, and I'll be happy to tell ya about them.

The first was a laminate-stock blued model from shortly after Ruger launched them. The bolt was VERY stiff and hard to run, and the accuracy was not super, like 1.5" at 100yds most of the time. The trigger was good though. I sold it within a year.

The second one ( I know, I know the definition of insanity) I still own, and it is an excellent rifle. It is a stainless 16" in a laminate stock, maybe Ruger made some improvements? I really have no idea why this one performs soo much better than the first one. The bolt is much better, although still a bit gritty, I can at least run it with a modicum of speed. Accuracy-wise it is really excellent! Just a couple of weeks ago I put 5 rounds under a quarter(as in the U.S. coin 25 cents) at 100 yards using federal 168gr gold medal match factory ammo. I have no time for forward mounted scopes, maybe they were a good idea 50 years ago, but they are totally limiting now. I put an XS sight picatinny rail on it, and cut the forward section of the rail off so that it performs like a more conventional scope base, and bonus I still have my irons. I'm running a Vortex PST 2.5-10x32 on it, and I'm going to try putting it into one of the synthetic stocks soon. I'm shooting Berger 155 VLD's in it over IMR 4895 with great success. It's even wearing my SiCo Omega right now. Hope this helps. I'll try to attach some pics if I can figure out how.

Necro Post, anyone have one of these? Whats your opinion? I have been looking at them for an East Coast hunting rifle.
F

I have one that is the 16” in a laminated stock. The bolt is not as smooth as my Remington and the thing is Loud to shoot which is normal for a short barrel. With a bedding job and a slight polishing on the trigger, it will shoot both 155 SMK palmas and 155 Hornady SP (my hunting bullet) into 1/2 MOA with regularity. Mounted a scope in the normal position (not scout) and Have taken it to just over 900 yards. It’s a very accurate rifle and handles very well in both blind and stand. Wish I had a suppressor as I dont care for wearing ear pro while hunting. For an eastern rifle, this would be a good choice. Light and maneuverable. Looking forward to trying subsonic with this one.
Reactions: KM375

I owned one but could not get it to shoot well. 3 Moa at best so I sold it.

A Little South of Bardstown down yonder in them th

Noting my avatar, the Ruger performs VERY WELL! I love mine. McMillan A2 stock, Smith enterprises M14 muzzle brake, SWFA Tactical rings, Leatherwod Scout ballistic scope, TIS QC sling
It's a bolt action obviously. The M14 Scout is a very capable rifle, maybe not as accurate as the Ruger,and may be able to put rounds down range faster, but both(my scout) use 20 round mags, and I am nasty with mine. Get a M1A Scout, and see if you can keep up
PS That forward scope, it goes to alignment aim before the rifle is even in you shoulder.

What optics are guys using on these rifles? looking toward a burris ballistic, leatherwood ballistic, and the leupold vxR

Shrubjr said:
I have no time for forward mounted scopes, maybe they were a good idea 50 years ago, but they are totally limiting now.
Click to expand...

They were a good idea when bolt action rifle and detachable magazine did not go together. Now it's just dumb.
S

I have a stainless LH version with the laminate stock. I also have the XS pic rail. As previously stated it is fairly light and the accuracy in the stock form is a little better than adequate. I would like to put it in a stock with an adjustable cheek piece, add a better trigger, and see how much the accuracy is improved. Overall I really like the rifle.

IMHO, the only functional advantage of a Scout style forward mounted scope is that they clear the space above the action, permitting loading from stripper clips. In rifles that have detachable magazines, and even lack stripper clip slots, they are a pointless affectation.

My 91/30 Mosin Nagant has been refitted with the Archangel stock, which incorporates a 10rd D/M.

Since it also carries a stripper clip slot and conventional scope mounting is a bit of a hassle, I removed the entire rear sight assembly, which reveals a set of lengthwise barrel grooves, very much like those found in older .22LR scope mounting systems. I simply attached a pair of high heavy duty air rifle scope rings and mounted a relatively nice Bushnell Banner Handgun Scope. It's a rugged installation, keeping up well with the Mosin's recoil, and allows a decent method for sight adjustment.

The Mosin's Stripper clip reloading capacity works so well, I prefer it over the provided D/M, and the clips stow very nicely in an M-1923 rifle ammunition belt (marketed as a Garand Rifle Belt). The provided D/M is nice, because it doubles the original magazine capacity; I simply leave it in place.

The M-14 was my issued carry weapon during my RVN service. It become a grafted appendage, never leaving my sight for my entire tour of duty over there. Heavy? I suppose; but since it was an everyday/every moment companion, the weight had ceased to be an issue long before we boarded transport to 'Nam.

I don't have that kind of intimacy with the Gunsite Rifle, but it would need to be pretty accurate to be an improvement over the M-14 (M1A, a reasonable comparison since my M-14 did not have the selector installed).

In a firefight, the chances are very good I'd be dead carrying the GSR, since it's rate of fire just does not compare even close to that available from the M-14.

My wife has the laminate version in .308 with a Swarovski 3-9x40 mounted in the “normal” rear position. I don’t see an advantage of the forward “scout” position.

I think it is a solution to a problem that doesn’t exist.

It is a very handy rifle, I killed a nice 5x5 Bull Elk during our gen season a few years ago. As far as accuracy, this rifle shoots federal blue box 180’s 1/2 moa.

I owned 2 ruger GSR one in 308 shortly after they came out, could not get accuracy out of it at all 2 moa most of the time, as stated above bolt was pretty stiff also. Very loud rifle as to be expected, I also had one in 450 bushmaster, now that was a cool gun, also very loud and kicked like a mule. One of my friends had to have it so I sold it to him. Now I have several m1a’s and my scout squad is my favorite, no recoil and pretty accurate for a semi auto. Kinda comparing apples to oranges, but I’d rather have the scout squad.

We run this GSR with a can 100% of the time and come to think of it now, it has never been fired w/o a suppressor. Pretty nice little hunting rifle.

If I were on safari crawling around in the brush with lions I wouldn’t mind having one with an aimpoint up front for a quick swing and pointing.

I think I would rather have my Blaser double in 416 Rigby...

Just got it in 308 installed surefire warcomp, waiting on optics. Not sure how I will mount the scope, forward or traditional over the receiver mount. Will be used as an east coast deer rifle, so close in woods or less than 300 yard farm fields. I have the Rhodesian sling from andy's willing to give it a try in the scout gun role.
This is how I have it set up so far, super light, just need to get it zeroed.