Please excuse double picks, first time posting /editing off ipad. Will need to clean this up on a pc later. Posting multiple pics from an ipad with text interspersed is apparently too difficult for me as the ipad does not play well with this site's editing. Plus imgur has changed their posting methods again, lots of editing fun here, bear with me.


Bought a vudoo kukri carbon fiber proof barreled action from Mile High and put it in an AG Composites Alpine CF stock with a two stage Timney CE and Hawkins Precision M5 DBM for the bottom metal. Rifle was built with a 8.5lb weight class restriction for NRA silhouette and also sees duty in steel and tac style matches. Generally pleased with it overall, but had some real teething problems at the beginning.

During a tac match rifle failed to feed 16 times out of 139 shot match, basically dropping 1.5 stages out of 9 for the day. Disappointed and frustrated I felt like tossing it in the trashcan. For the $$$ expended I expect much higher reliability then 123 out of 139. I’d had an occasional failure to feed on the bench or prone previously, but nothing like this. Ok, quit bitching and figure out a solution. So what was causing this at this tac match vs prone, bench or standing? (A sidenote, I was not the only person having these FTF’s with a vudoo at the match. Guy with a MDT chassis was having a worse day feeding than I was, same issue)

lets look at a couple pics :


here are some of the FTF cartridges :


So the main issue is when the rifle is loaded against a barricade, the mag moves aft and down angling the bullets away from the bolt. So this aft/down movement has to be prevented, best solution I see is to take up the space between the rear magwell edge and rear mag edge with some sort of wedge or spacer.

This is not a problem of improperly loaded mags or where the rounds are rim locked, figured I'd mention that before somebody states I loaded the magazines improperly or somebody tries to claim it is a cleaning issue, it's not.


lets get this out there, I don’t blame either VGW or Hawkins Precision for this issue. Rifle was put together by me and was not assembled by VGW. The parts are what they are and every Single DBM (M5 standard) I have measured has differed in dimensions slightly from brand to brand. Generally this isn’t a problem in the centerfire world with their larger bullets as they just ramp over these small differences, but the rimfire world with it’s soft, easily deformed small diameter bullets NEED to be in the right place at the right time in the feeding cycle. The vudoo mags I have have longitudinal play of about an eight of an inch in the Hawkins dbm and are held forward by the mag release lever and spring during normal operations.

BTW the machining and finish on the Hawkins parts are superb, in fact all the manufacturers listed for this build are top notch in quality!

Back to to problem, three solutions for it:

I did not go with solution number #2 as I didn’t feel like modifying each magazine. I’ve actually seen a couple of other vudoo owners do this with either vinyl tape build up or self adhesive velcro on the back side of their magazines. I am seeking a more robust solution that only modifies one part. Plus if I had installed metal button head screws in the back of the magazines then I would have metal to metal contact that would eventually wear through the anodised finish of the magwell. I think that the small plastic wedges used in tile work and applied with VHB tape would probably be the best magazine based modification.

I did try solution #1 using a pieces of .020, 032 and .040 thick aluminum sheet and 3M VHB tape. (Shiny object distraction, VHB stands for Very High Bond and according to our distributor who turned us on to this line of tapes, it was originally developed to structurally bond glass windows to high rise buildings in the Middle East. It had to withstand high temperature extremes of cold/hot daily and still hold the heavy glass panes. Is this a real story? Maybe, maybe not, but the VHB tapes are the real deal as they hold stuff very well. I’ve taped objects to the inside of vehicle windshields over eight years ago and they are still secure with no loosening). I am using the thicker .049” thick tape here,I should probably have used the thinner tape that is around .025” instead. Problem is it’s expensive, I know we are paying around $95 per roll.

This worked and cured the problem as a test session of 100 rounds was unable to produce any FTF with front bag loading applied. What I didn’t like was the mags were very tight on insertion/removal making one hand mag changes challenging or impossible as I could not adjust the height of the tape/metal shim except by replacing the whole thing with different sheetmetal thicknesses. Only the .020 shim worked ok as the .032 and .040 shims plus tape were just to thick to insert a magazine.

I finally settled on solution #3 , installing a button headed socket screw permanently in the magwell. This is also the most difficult option with the most potential of fuck up, but has the most adjustability. This required several specialized aircraft sheetmetal tools, a lot of patience, and some metalworking skill. I do NOT suggest this mod for the casual bubba as it is very easy to make mistakes and irreversably damage the finish and or functionality of the DBM.

Best stick-out height tested so far has been .046” from flush.
So how did this turn out? I've since shot six matches mixed steel and tac styles over 4 months with approximately 1200 rounds fired since the modification. This includes loaning it out to other people to use in a match in a deliberate attempt to see if it will fail with somebody else using it. I am happy to report that I've only had 5 FTF failures over that time period. That is an acceptable reliability rate for me.

The mags will almost drop free using just the mag release lever, just need a little bit of effort to clear them out of the magwell. Mag insertion is also very doable, not as easy as before the mod, but mags go in easily when properly aligned. Very usable for a match setting with time constraints. 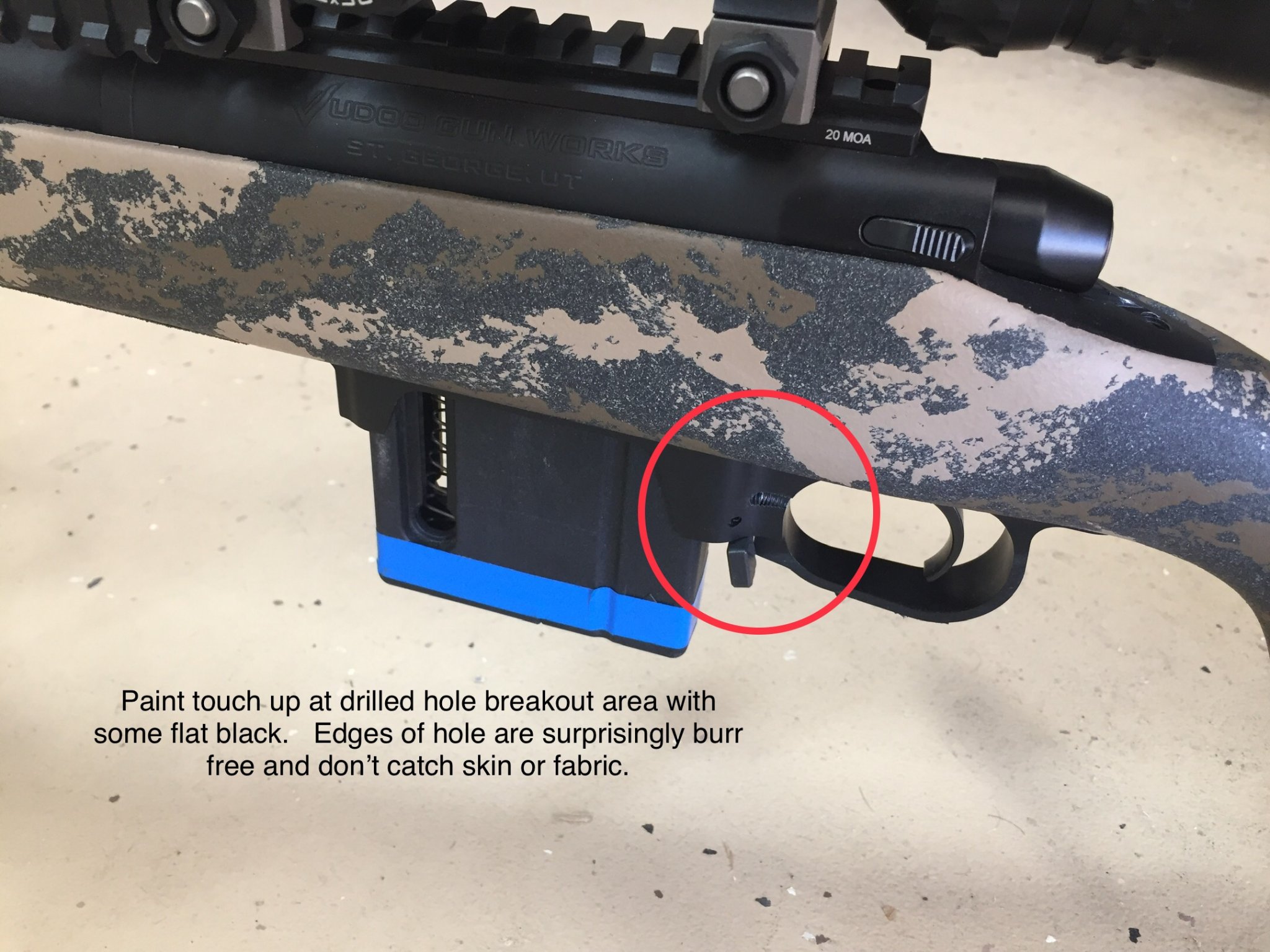 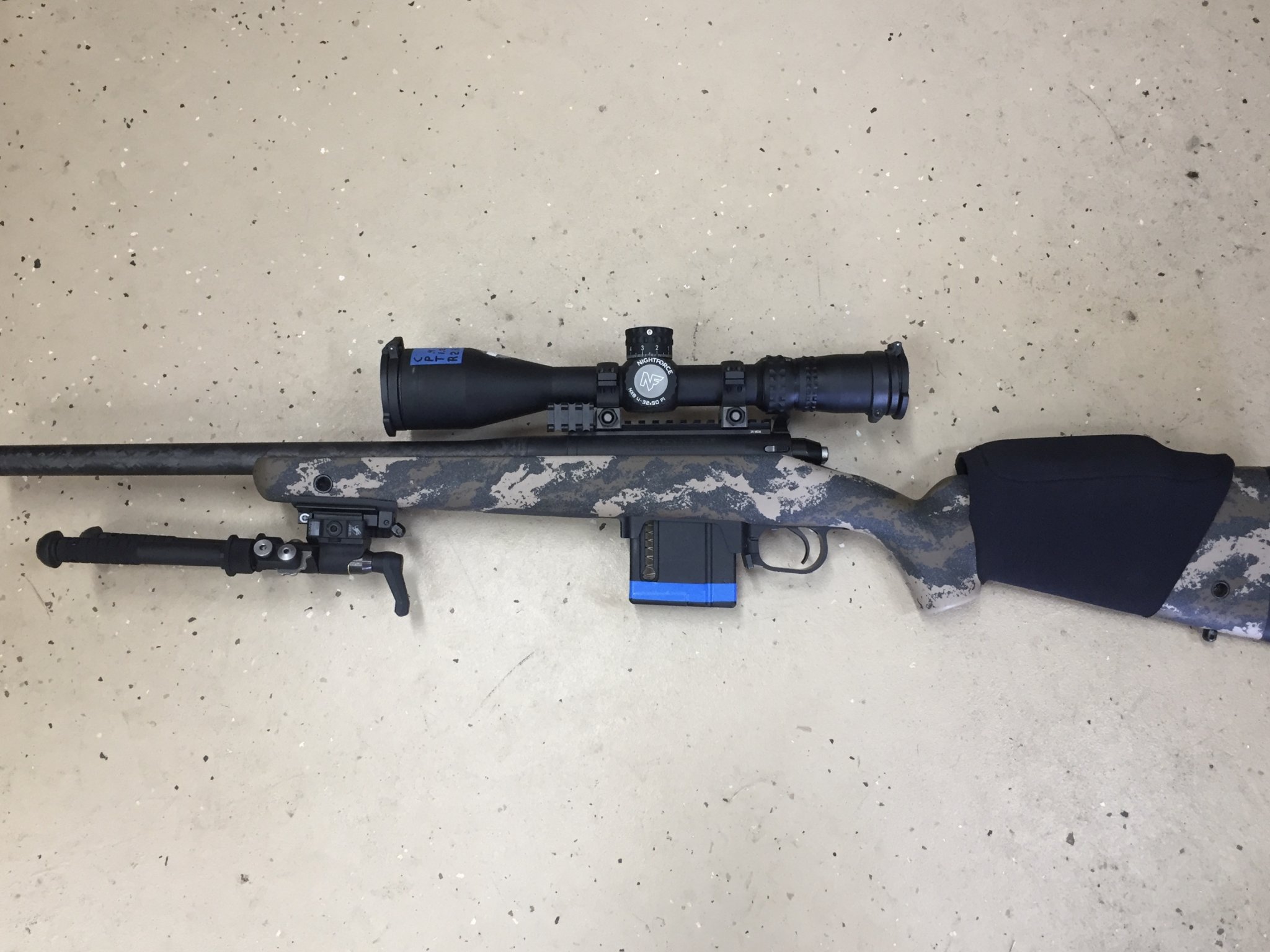 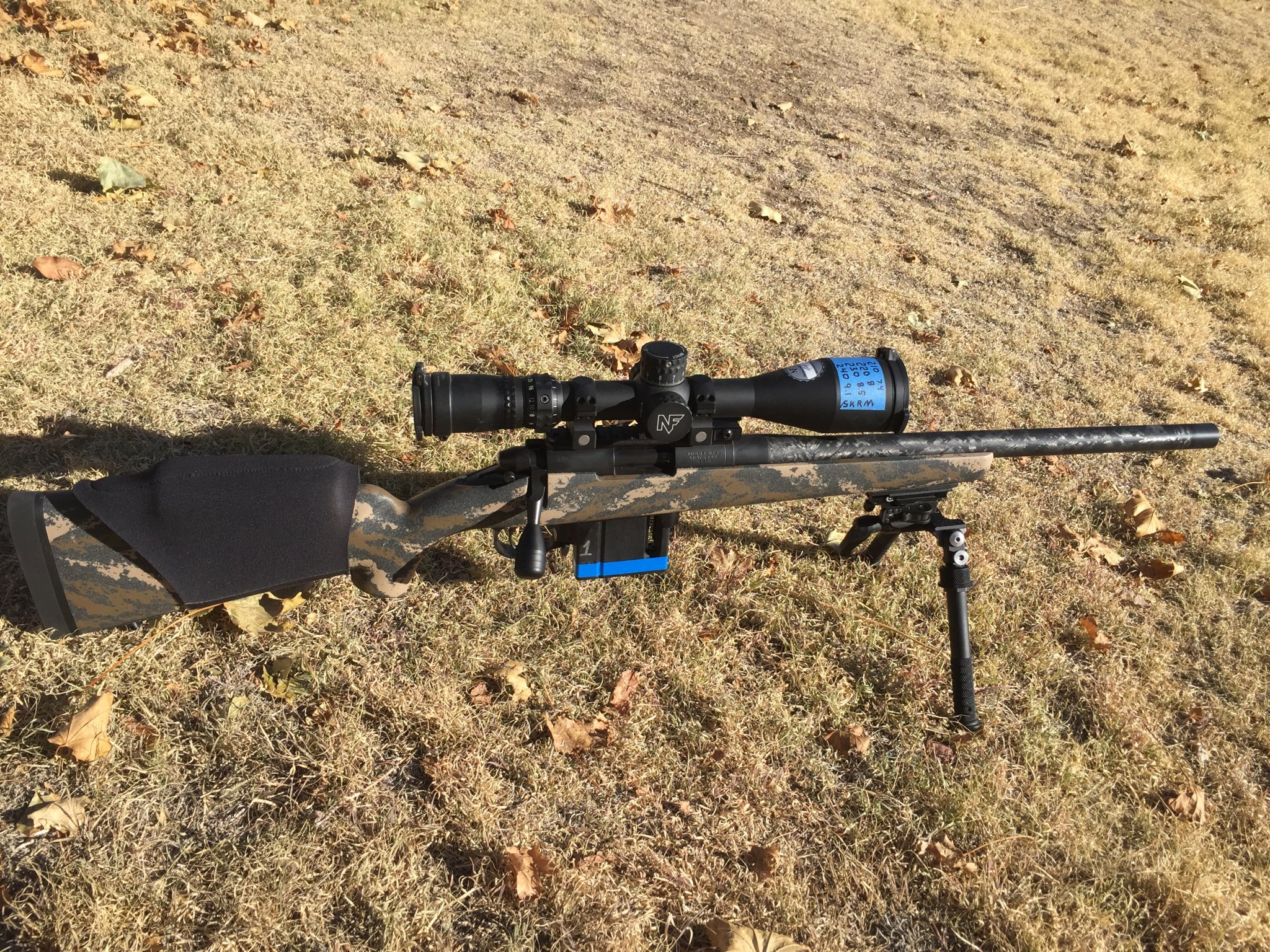 Reserved for expansion if needed

I picked up a new Xylo chassis. It has a mag rotation prevention latch, it's a cool design. They utilize the design to almost use the mag as a barricade stop, just push right into it, no issue. The only issue I had was the standard mag latch was a little too short, and the last round of my poly mags would get a bolt over. Aluminum mags run fine. I ended up getting a slightly longer mag latch. Overall though it's been great.
Last edited: Nov 1, 2020
Reactions: nakoa01

picture no show what happen here?

Thank you for a most interesting and thorough discussion. I hope this solution works well for you.

I have Hawkins BDM in my Vudoo and have had feeding problems with Vudoo’s 10R aluminum magazine. I never experienced any issues with the plastic version. I have not used it up against a barricade bag or setups like you describe therefore I can’t comment in this regard. However, to that end I did check for play and tip per your description and found it minimal albeit I did not have time to measure appropriately.

Back to the aluminum magazine...the spring was very stiff and I suspected that it was forcing the rounds not to feed up correctly. Instead of messing with it I sent it back to Vudoo and they checked it out and “tuned” it up. I noticed right away that said spring seemed less stiff. I need to give it a thorough workout, however running a few rounds through it it seemed better.

Although not completely relevant to your issue, the commonality of Hawkins BDM and feeding issues raised a red flag. I will test the rifle in a similar setup to what you have described and see if I can replicate the issue. Thanks again for the detailed write up.
C

I have a Hawkins bottom metal in a Mesa precision stock and haven’t had any feeding issues with the 10rd poly mag or 5rd aluminum mag.

I had basically the same issue with my Vudoo in an MPA chassis a few years ago, except in my case gravity was pulling the front of the magazine down, because the mag catch was the point of rotation. I 3D printed some 0.7mm shims and taped them to the top front of the magazine, preventing it from rotating, while not preventing the magazine from dropping. Then after talking with Vudoo, I ordered a taller mag catch to fix the problem for any magazine.

I think the big issue is that they designed all this stuff for centerfire rifles with large case heads, so if the magazine shifted down 500um, it didn't matter much, but with a .22LR, that's 20% of the exposed area of the case head. Also, the centerfire cartridge has the case head at the very rear of the magazine (or nearly so, for shorter cartridges with spacers), so a rotation around the mag catch causes less of a vertical drop in the rear, where the centerfire cartridge feeds than it does up front where the rimfire cartridge feeds.
Reactions: Badjujuu, littlepod and Kambaku
Show hidden low quality content
You must log in or register to reply here.