About to pull the trigger on the Standard aluminum version for the KRG Enclosed Forend interface . That's a QD setup.

Any word on QD having issues ? Rattle ? Lockup problems ?

goldenbear926 said:
Yes they are seperate peices. The adapter accommodates the standard length/offset bipod that could be used on any other platform.
Here is a photo of just the adapter.View attachment 6955766
Click to expand...

I need that adapter for other bipods. You say it locks up tight. ? I have the atlas? adapter but it fits loose. Thanks.

deersniper said:
I need that adapter for other bipods. You say it locks up tight. ? I have the atlas? adapter but it fits loose. Thanks.
Click to expand...

Tight as a drum
Reactions: wildcats and deersniper 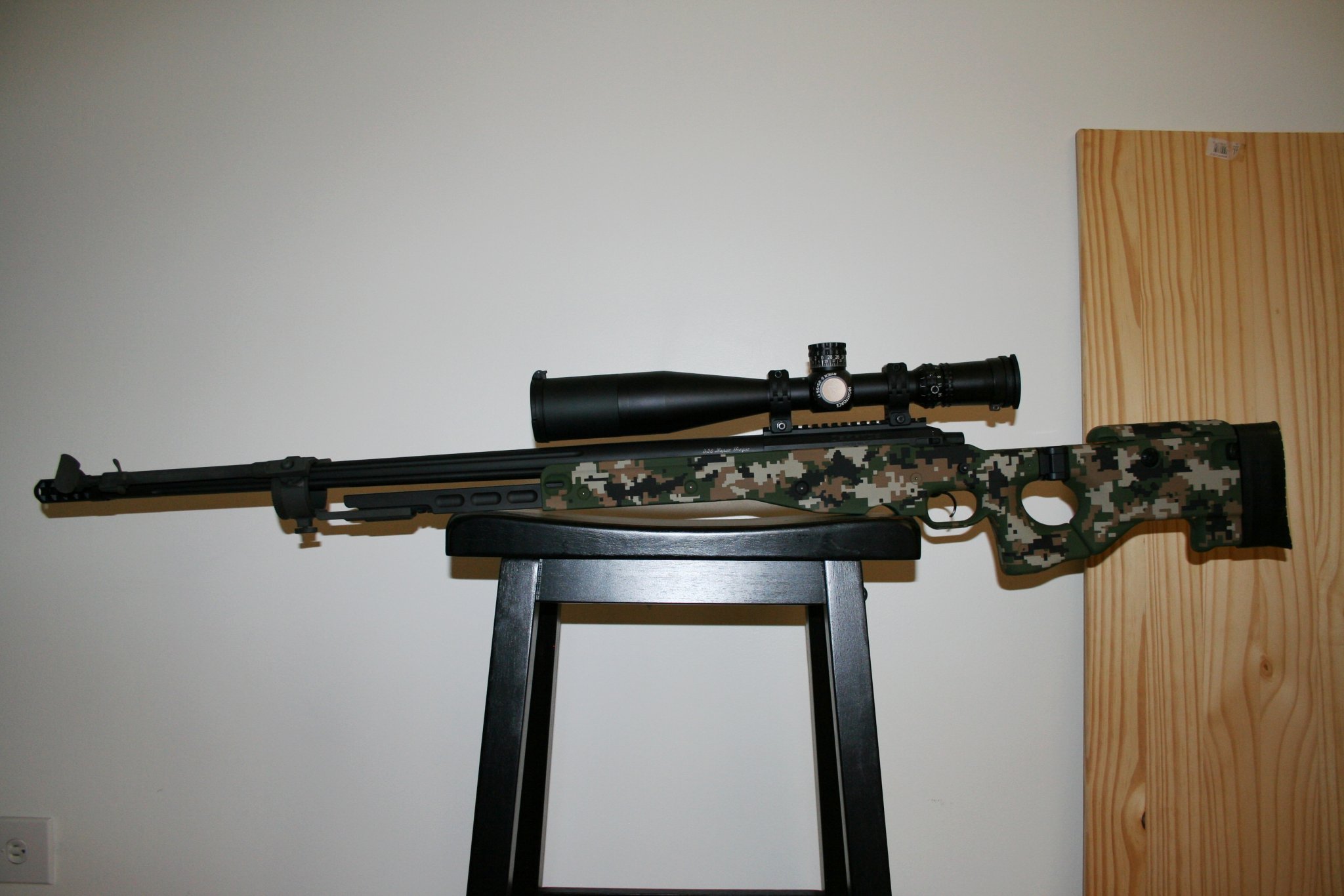 @Squibbler I have a 300 win AXMC as well. How far does the mount stick out past the forend (distance from the forend to outside/farthest dimension on the 'collar')? I have an additional shorter barrel on it and didnt want it to encapsulate the brake.

I got the panning model. I don't really use the feature... you have to tighten the thumbscrew down so tight to prevent it from panning... can't really tighten it enough.
Reactions: Misterkit

I like my panning model so I’m NOT wishing I would’ve ordered the non-panning one. But, here are some things I discovered that it would’ve been good to know upfront about the panner.

You use a T27 torx bit (not included) to tighten/loosen the panning tensioner, which is a bolt located on the very top of the “circle”. The way it works seems unique; basically one bolt goes through the top “bridge” that attaches to the legs, and this bolt threads into the circle thing. There’s two Belleville washers that provide spring tension (a Belleville washer is a type of spring shaped like a washer). One washer sits between the bolt and bridge, and the other between the circle and bridge.

The unique/interesting thing is that there is a tiny bit of red locktite that stops this bolt from backing out. I know this because mine came from the manufacturer without that red locktite and as I was testing the bipod, the panning bolt backed out on my family room floor. A call to EI resulted in a very sincere apology plus precise instructions as how to rectify the problem without having to send it in. They’re a class act and great people.


Background:
I am a varmint shooter, not a long distance guy. With this bipod, I plan on shooting prairie dogs with my .204 from a swiveling table. I need to get on target within seconds and may have to peel off for another target if the first PD jumps in his hole, so that’s why I choose a panner. Typically, I don’t have time to get in some perfect position. In the past, I used a big-ass X-shaped sandbag, USA made Dog Gone Good brand, but I wanted to try something lighter. That 14lbs sandbag can be a bit of a pain to lug around.

I’ve only used the bipod at the range and simulated panning it around quickly. Seems to work well. It’s my first panning bipod. I own an Atlas Scal and a harrris too, but haven’t used those for PDs yet either. Next year will be the Year of the PD Bipod Test for me!

The EI owner said he likes his for applications like mine (prairie dogs), and that his personal one has never came apart.

It would be nice if I didn’t need a tool to adjust tension, but it makes the bridge top low profile and I think once I get the tension right, I won’t touch it again. Also, since the panning part is not really not something one can lock off, be warned that if you put it in your case attached your rifle, the legs will angle and might scratch your barrel or scope, depending which way you’ve collapsed them. Since I don’t want to be bothered to take the bipod off (no quick release), a big thick red pool noodle over my barrel solved the scratching problem, plus It makes me look incredibly cool at the range

Have the panning model as well as the 50BMG. No issues with either and both work great.
Reactions: Misterkit
M

Thanks for the responses. This one's on my shortlist and am also considering the accutact wide stance (fc-5 g2) model. If anyone has experience with that I'd be interested in hearing impressions.

For the elite iron, has anyone observed issues related to cold weather? I sometimes shoot out in the snow and didn't want the mechanicals locking up in freezing weather.

Anyone know if they plan on making a version that clamps to an Arca rail?

milanuk said:
Anyone know if they plan on making a version that clamps to an Arca rail?
Click to expand...

The owner (Dale?) told me that EI’s working on a QR solution but he hasn’t gotten it to a point where it’s ready for sale. He didn’t mention Arca and I didn’t ask, as I don’t use Arca on rifles (but I do on cameras!).

As a side note, for one reason or another, he doesn’t like the existing picatinny lever QRs out in the current market. Basically, he said some levers break, some release when you don’t want them too, and all levers catch on stuff, which, as an active fellow, he really seemed to dislike. For example, he mentioned “fast roping” as an activity in which levers suck.

I do not fast rope en route to a prairie dog town. But, if I owned a helo……I wouldn’t fast rope outta it onto the town with a lousy bolt action, I’d friggin’ UNLEASH the mini-gun on it!!

He suggested I keep the 1/8” hex key on me to take the bipod off. I always bring tools when shooting, but I was thinking of unobtrusive ways to affix a hex key to my one rifle that I am using the bipod on. It would make a quick removal easier. Maybe stick a hex key inside a TAB Sling Thing velcroed to the rifle’s side. Or, use two knobs with 1/4” studs to replace the headless 1/4” set screws. You see, I’m just sitting there with the rifle (almost no walking) so it’s not gonna catch on anything, but such a solution would not work for Dale.

Anyway, I came away with an appreciation of how much thought Dale puts into his bipod. Pretty cool guy.
7

Last time I emailed in and talked with Kathy I believe, she said an adapted Arca mount is in the works but they're busy with more important things.
S

Misterkit said:
@Squibbler I have a 300 win AXMC as well. How far does the mount stick out past the forend (distance from the forend to outside/farthest dimension on the 'collar')? I have an additional shorter barrel on it and didnt want it to encapsulate the brake.
Click to expand... 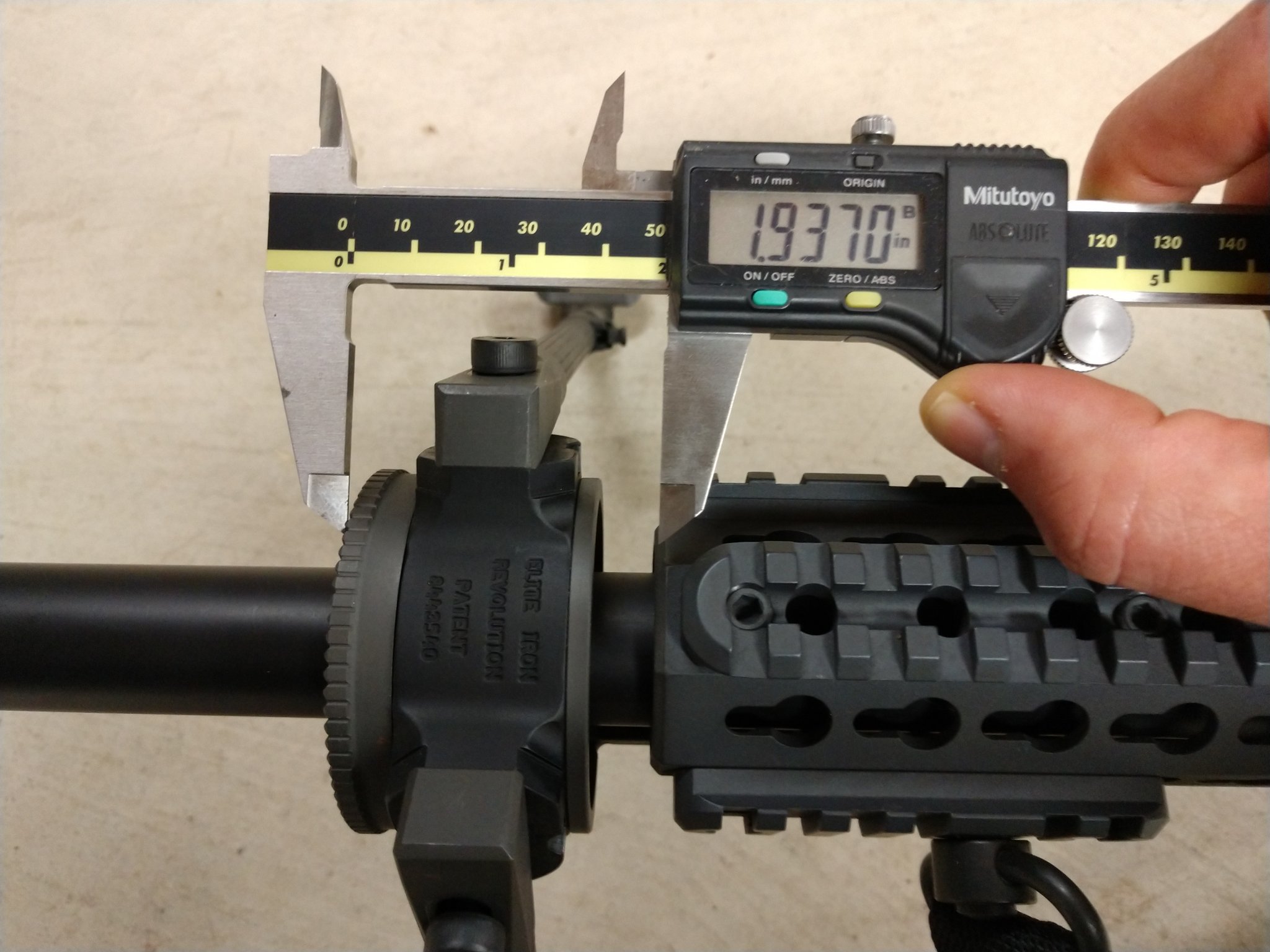 I could move it back another pic rail slot... possibly two, which would be another .4-.8". Next picture illustrates the pic rail attachment point. 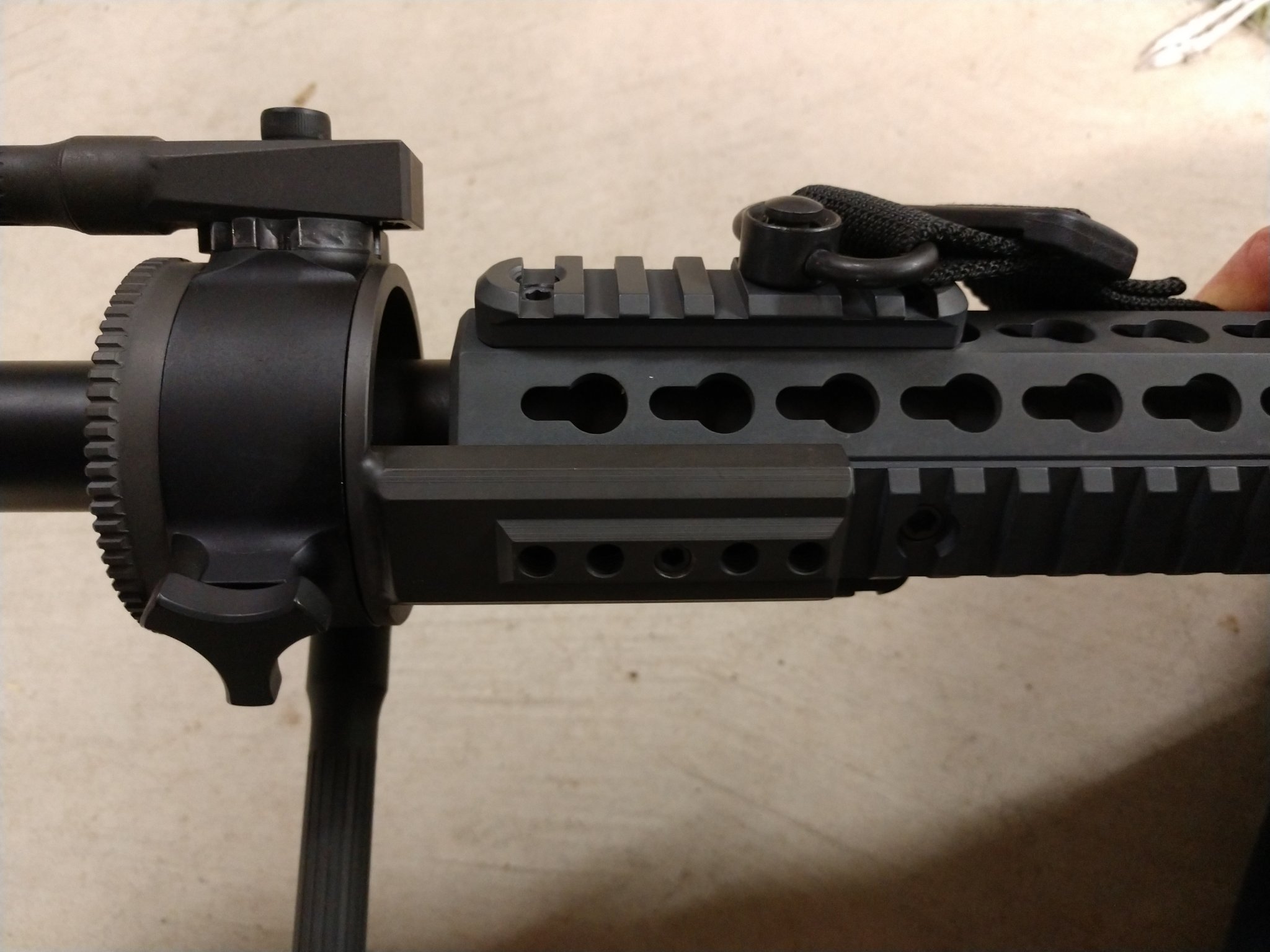 Misterkit said:
For the elite iron, has anyone observed issues related to cold weather? I sometimes shoot out in the snow and didn't want the mechanicals locking up in freezing weather.
Click to expand...

Shooting enough in cold weather conditions you find that everything will have freezing points. I have frozen the adjustable legs on the E.I. This occurred when I took my rifle out of warm truck and placed extended legs into fresh snow. When I retracted extended legs, the melted snow went into leg housing. The melted snow later froze and made leg extensions stick. I simply tapped them loose. The E.I. is extremely well constructed and is probably one of the most durable bipods. For extreme weather conditions and harsh environments it would be my bipod of choice.
Reactions: Misterkit 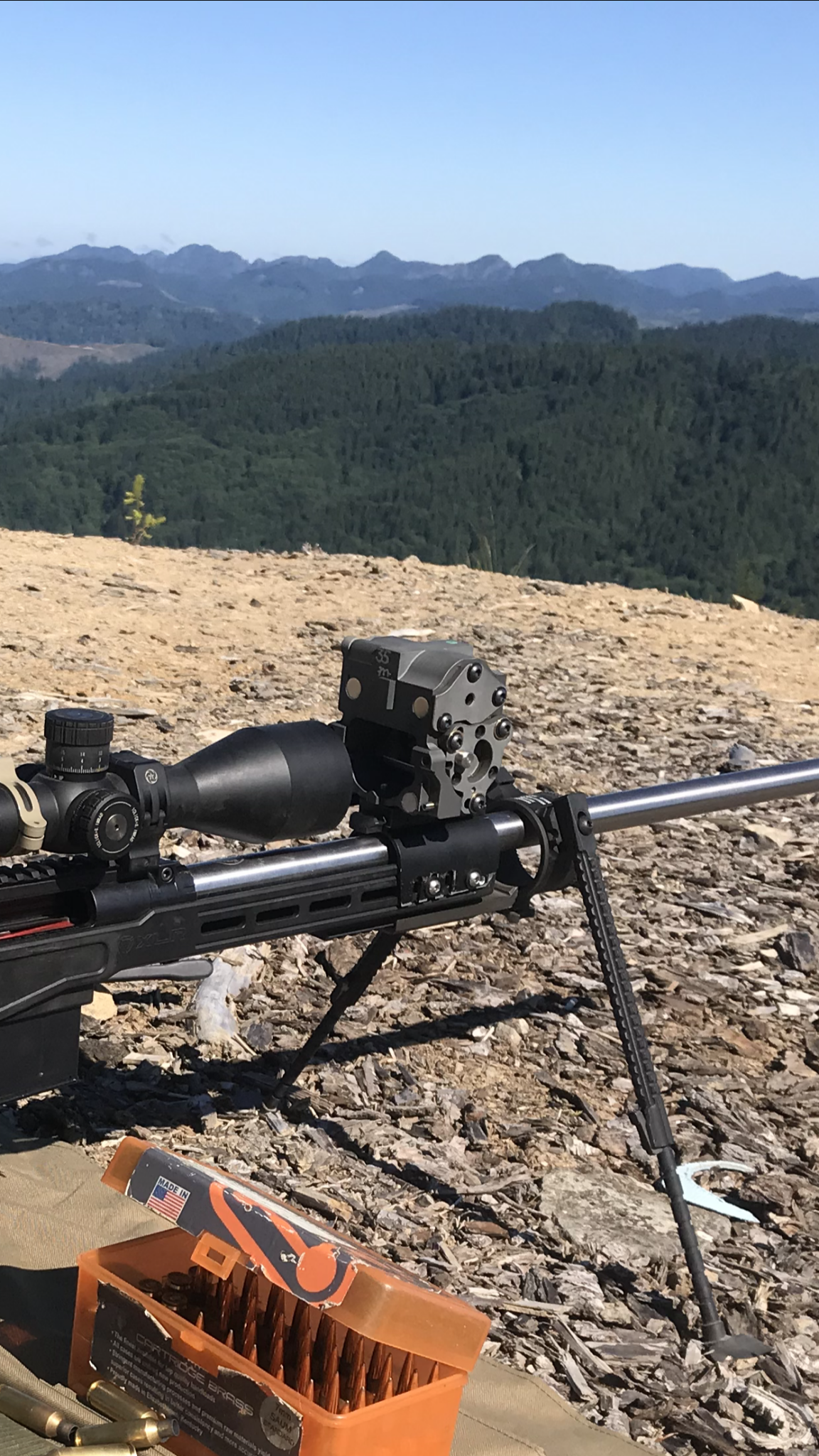 @Squibbler - thats perfect. Thanks for taking the measurement.
Reactions: Squibbler

I'm looking at getting one of these bipods for my Desert Tech.

For those of you with an SRS A2, what offset did you go with for the mount?

@Shootin Stuff Give Elite Iron a call; they will tell you what setup will work with your rifle.
Reactions: Steel head and Nik H
R

Elite Iron still a good option? Looking for one for an AIAX. Trying to decide between Atlas CAL Gen 2, Ckye Pod, and the Elite Iron. (I have a Harris right now…)

The CAL (Cant And Loc) Atlas Bipods were developed for shooters that do not desire the Panning feature. The BT65 mounts directly to any 1913 style Picatinny rail via a low profile two screw clamp assembly. It is comprised of 6061-T6 aluminum that is Mil-Spec Type III hard coat anodized and have...

Elite Iron | A designer & manufacturer of rifle and pistol suppressors, bipods & firearms accessories. Made with high quality in the USA.

Are we out-of-love with "underslung" bipods?