Picked up one of these (18" version) and built an upper for it on an Aero M4E1 Enhanced with a Seekins 15" MCSRV2. Made it out to the range on Saturday to try is out with some 22LR ammo I had on on hand. It was hovering around freezing and really gusty. I also wasn't seasoning the barrel for each type of ammo. Far from ideal, but I just wanted to try it out and what I had that might work in it. So, take the results with a grain of salt...

I just fired a group or two of each. If the first group was terrible (and some were REALLY bad!), I only shot one group and moved on.

Tried the CCI Subsonic HP and Eley Pistol Match at 50. They both stayed in a 1" patch.

We have an indoor 100 yard range locally, but before I go and pay for some time on it, I'd like to order some more ammo. I've heard these barrels like CCI SV on the cheap end, so I've acquired some of that locally. I also hear these barrels like RWS Special Match and Eley Tenex/Match/Team on the high end. Eley Subsonic HP has some good reviews... Mixed reviews for SK and the traditional RN Eley stuff (Club, Target) as well as Center-X.

Wondering if anyone has tried some of these new Eley offerings in these JP barrels (ELEY semi-auto benchrest precision/outlaw, Contact, Force, Action, Action+) or if there is anything else that's worth trying?

Mine doesn't shoot well either. At 50 yards its a 3/4 inch rifle. Not too happy. I've used Tenex, Midas Plus, Eley Match and Wolf. I have built 10/22's that run circles around it from much less.

Yeah, the 10/22 I build with a Kidd barrel would have shot circles around this. I've also owned a DPMS 22LR upper, and I don't think this shoots any better. It is a bit disappointing. I didn't expect it to keep up with a super tricked out 10/22, but I did expect it to do better than the less expensive DMPS upper. A part of that expectation came from it being a JP product and the review on majorpandemic. 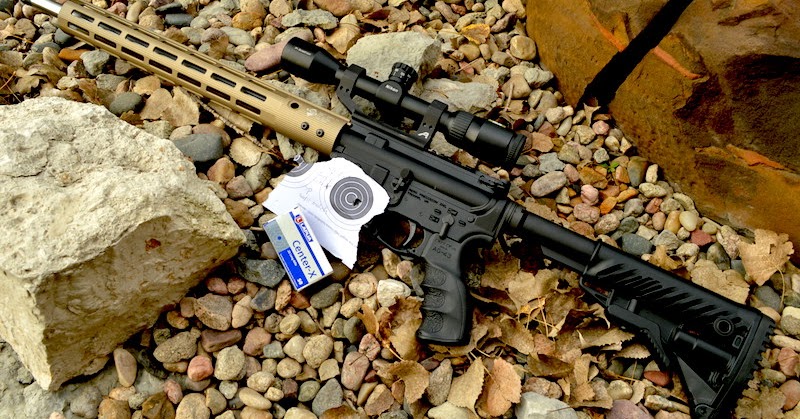 I don't think that review is representative of the typical performance of this barrel with match ammunition from what I've read in the threads on here and other places. My own fault for not doing enough research...

I do have use for it as a training tool to mimic my SHTF AR, so it's not a total loss. But, it's not something I would bring to a match for any kind of precision oriented discipline.

My DPMS upper hammers I'm very happy with it. Probably is the better then the JP by a little. But I didn't expect that one to be a tac driver. My JP was a Noveske set, JP trigger, Vortex AMG scope, and a PRS stock.

Doesn't seem to be many reviews out there for the new Eley stuff (semi-auto benchrest precision/outlaw, Contact, Force, Action, Action+) even in 10/22s...

Came across a public post on FB where someone shared a spreadsheet of all of the ammo he tested with one of these barrels. He tested on indoor and outdoor 50 yard ranges. Didn't say how many groups, or his cleaning procedures, etc... I processed it a bit. Here it is:


I've ordered a bunch of ammo to run a similar test on the local 100 yard indoor range. Not sure if I will be able to record velocities while shooting the groups, but I will check it for the stuff that performs the best afterwards.

I wasn't impressed with the accuracy of my JP upper with various ammo that usually does well for me (wolf match, Eley, Lapua, RWS, CCI Standard, etc.), to be fair JP went way out of their way to help out, and were great to deal with. I sent the barrel in, they rebuilt it on their upper etc. and tested it and contacted me with results. For them it shot ~0.8" with PMC Moderator and ~0.5" Eley Match at 50yds which seems to be about what they expected, at least they saw nothing wrong with those results. So at least a while ago that was what JP was testing with.

Unfortunately it seems like JP decided to lean toward total reliability more and max accuracy less, and I will say across all the ammo I've messed with, clean, dirty, it's run flawless. Even the product instructions for the JP supermatch 22 barrel state: "From most high‐velocity ammunition, you can expect 2‐3 MOA and 1.5‐2 MOA out of less expensive target‐ or match‐grade loads at 50 yards. However, the higher quality match loads may deliver MOA performance at 50 yards."

For me it's kind of a let down, had I read the expected accuracy before purchasing I wouldn't have. Even if it's a 1/2" rifle at 50yds with Eley match, that stuff is what $15-$20 a box now.....meanwhile my Volquartsen Deluxe will shoot better groups with Wolf Match for 1/3 of the price or CCI Standard for 1/5 of the price.

I'm hoping that it might do a bit better with some of this newer ammo that was designed specifically for semi-autos. I know that I'll eventually get another boltgun, so worst comes to worst this will become a carbine trainer.
F

Mixing copper-washed HV ammo with plain lead bullets probably isn't going to be helpful accuracy-wise unless you clean thoroughly after shooting the copper-washed ammo. But from what J-P says to expect and how your results are pretty much in line with theirs, I'd say it's unreasonable to expect much better. Although, to be fair, very few types of 22LR ammo will shoot good groups in freezing weather - aside from SK & Lapua Biathlon, I'm not familiar with anything that's really designed to do well in the cold.

I know, but as I said, it was just a rough test with what I had on hand.

Didn't get to the indoor 100 yard range, but did some testing on an outdoor 100 yard range. I cleaned the barrel from the last time to get out any copper. Only tested lead, wax coated ammo this time. Shot 10 fouler shots on steel to season the bore a bit (I know it's not proper barrel seasoning > cleaning and firing a box of ammo), then put 10 on paper to capture the group. Got some decent results with a few types of ammo. Wind was 4-7mph, with some gusts up to 10mph. It was changing direction a fair bit too.

Best results were with Eley Contact, Team and Subsonic HP. 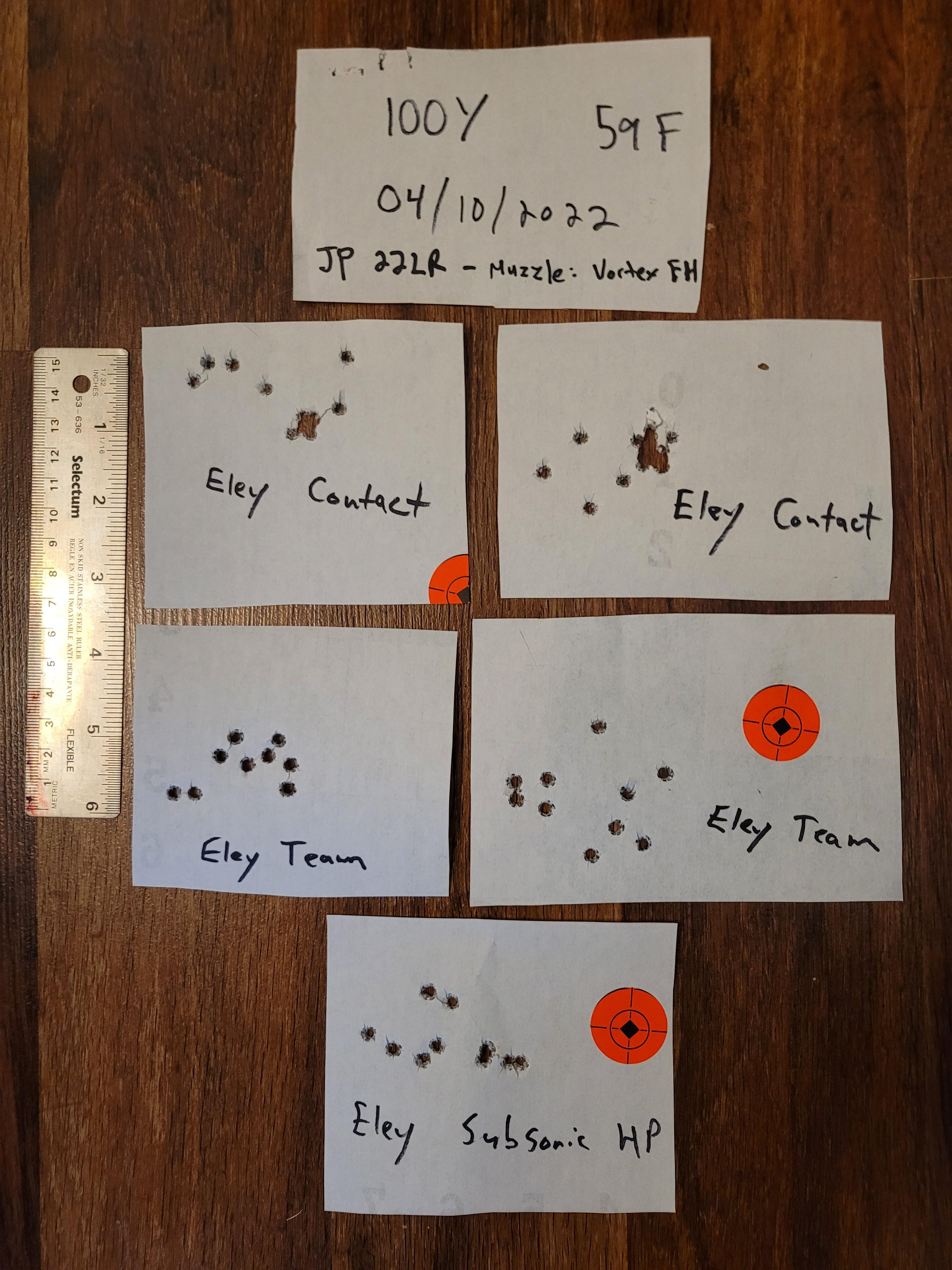 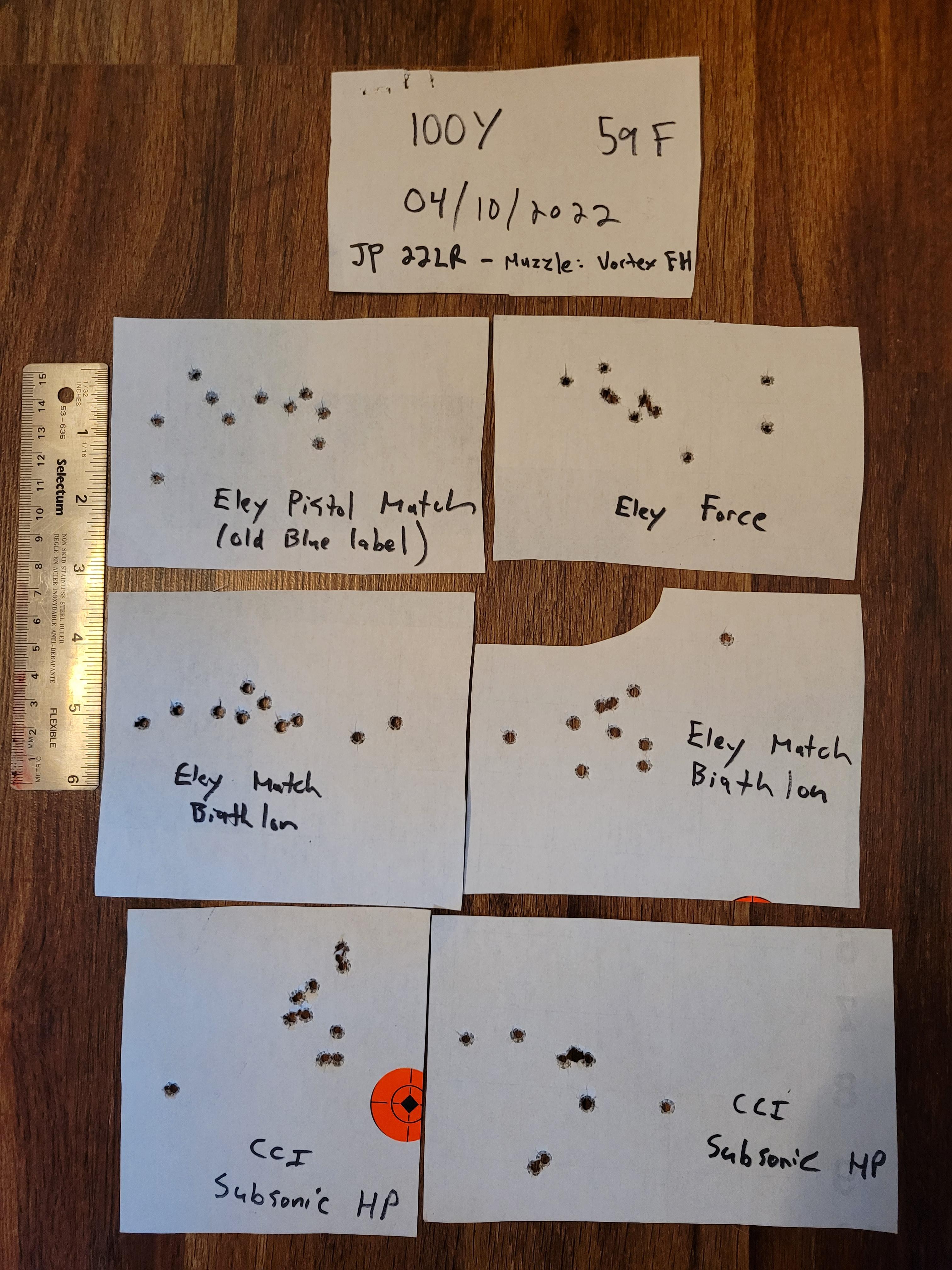 Other ammo that didn't shoot well:

I'm pleased with the performance of the Eley Contact and Team. That's the kind of performance I was hoping for and Eley Contact is similar in price to Wolf Match. I ordered a brick of Contact and another box of Team to see how they compare at further distances. Probably won't bother with Eley Subsonic HP since it's harder to come by and around the same price as Team.
Last edited: Apr 19, 2022
B

My JP barrel shoots Eley Semi-auto the best. I'd say 1/'2 groups at 50 on average. I was hoping it would shoot SK better but no luck.

bghartm said:
My JP barrel shoots Eley Semi-auto the best. I'd say 1/'2 groups at 50 on average. I was hoping it would shoot SK better but no luck.
Click to expand...

I didn't test anything at 50, so I'm not sure how well it performed at that distance. It didn't do that well for me at 100, unfortunately. So, I'm going to put the rest in the cupboard for testing in a future bolt gun.
Show hidden low quality content
You must log in or register to reply here.