Load Development for a 300PRC +P

I got a custom built 300PRC +P from Defensive Edge and am trying to work up the best load for it. The +P indicates a tapered entry into the rifling which reduces pressure and allows more powder and a bit more velocity than standard: https://defensiveedge.net/300-prc-p/ for more info.
I used H1000 and Berger 215gr Hunting Bullets with Hornady factory load brass that my son and I had fun emptying at the range a couple weeks ago.
My first loads were at the same OAL as the Hornady factory loads which I believe now were touching the lands, and chambering the round probably seated the bullet a bit further. I started at 76gr H1000 and worked my way up to 84gr where I could see faint marks on the brass if I held it up to the light right, and the primers were getting a bit more cratered, i.e. a slight ridge around the firing pin impact, but not flattening.
Max and min velocities vs charge weight shown below: 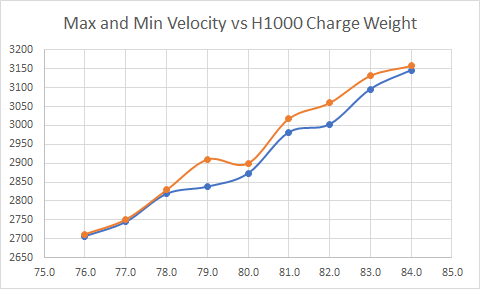 100 yard 3 shot Group size and elevation above or below aim point shown below: 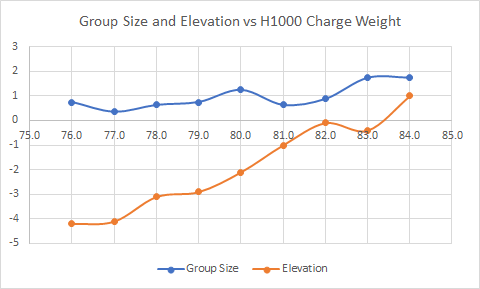 I decided to try and further refine things by trying two different seating depths between 81 and 82gr (minimal change in velocity and > 3000fps) and 83.5 and 84.1gr (3100fps+ and still relatively small dependence of velocity on powder charge). OAL touching the lands is 3.618" as near as I can tell using a modified case and Lock-And-Load tool. I am not very confident in the accuracy of this measurement as I could not get very consistent results, at least at the level of precision we're talking about here.
Results were as follows: 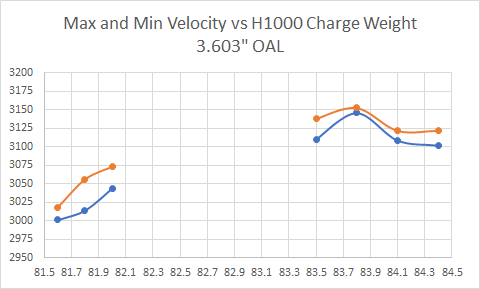 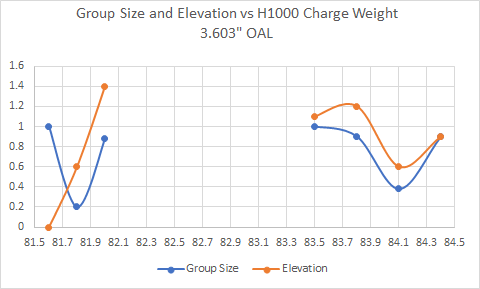 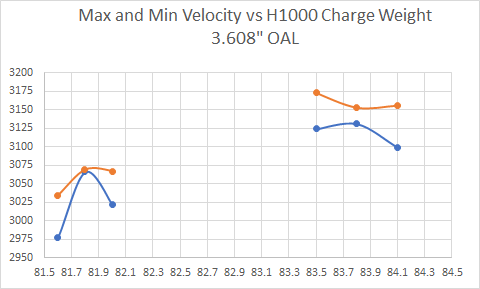 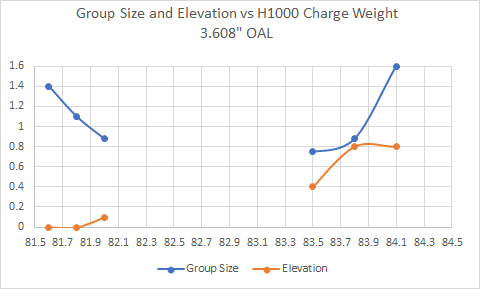 I was originally thinking that 84.1gr and OAL of 3.603" was going to be my load. But after graphing everything out, that same load just .005" longer quadrupled the group size and ES of velocity. Is this sort of sensitivity to seating depth normal? I was hoping to find at least some consistency in trends of powder charge variations between the different OALs, but I don't really see any.
I would certainly welcome anyone's thoughts or suggestions on how to proceed. I am getting back into reloading after several years, and what I did way back when was not nearly at the level of what I'm trying to do now.
Other information that may or may not be relevant: First loads were shot off a front and rear bag from a bench, the second two sets were shot from a bench but with a bipod and rear bag which I like better. There wasn't much wind to speak of. I am not a competition shooter, so human error may certainly be a part of the problem.
I also wonder if this is just the result of plain old probability. If I shot the exact same load over and over in 3 shot groups and each shot had a normal bell shaped two dimensional distribution about the aim point, I would expect to have some small groups, some large groups, and a lot in between. Am I just looking at that same phenomena here, i.e. is that .2" group just "good luck" and the 1.6" group just "bad luck"?
Thanks in advance for your comments.
Last edited: Jan 5, 2022

While i dont have any comments specific to your questions, I suggest breaking up the wall of text into paragraphs and re-uploading the pics as I dont see any, just the jpeg file names.
Last edited: Jan 5, 2022

3100 is moving! Especially with H1k. How long is your barrel? All my PRCs with Sammi chambers can run 3.7 COAL with 215s. Did you get a short freebore reamer where you can only run 3.6 ish?

Never run a +p so cant comment specifically on whats going on. Can't see any of your pics either.
S

Sorry about the pics, they look fine when I view the post, but obviously they didn't go through for everyone else. I deleted them from the text and reuploaded them individually. I hope that helps.

This is my first experience with a +P chamber and so far I am very impressed! I also bought a copy of Quickload, but it does NOT like the pressure it calculates for my loads and its velocities are significantly lower than what I'm getting. This is my first experience with that program, so I am assuming it's the +P throwing it off.
Show hidden low quality content
You must log in or register to reply here.

S
Case head expansion as a sign of excess pressure developing a load for +P chamber?