Some quick background for those who don't know the history... In the past I developed the reputation as the resident OSS shill over on Arfcom. I labeled myself an OSS fanboy, mainly because I'm just excited by anybody's attempt to innovate and do something different than what everybody else is doing, and I liked their operating philosophy. Of course anybody who has been paying attention knows that OSS was a bit controversial for many years--the typical response from many any time they were mentioned was "they are loud and heavy". I felt like they got some unfair criticism because they always made it clear that they were trying to prioritize sound levels at the shooter's ear even if it meant sacrificing levels at the traditional muzzle measurement location. I think they deserve credit for doing a lot to increase awareness and focus on back pressure in the silencer industry and consumer community.

So I often pushed back and defended them with as much information as I could find from reviews and user reports, since they never showed up to defend themselves, but we never had good meter data to reference. Eventually when they were closing out what they called the Generation 4 (I believe this was the first model offered for sale to the public), I grabbed a couple at a major discount. I always hoped that somebody with a good sound meter would get us some independent data but to the best of my knowledge that never happened with Gen 4. Shooting just was not part of my life for many years and I got some grief for never putting rounds through my purchases, but they just sat in the safe while I lived my busy life for the last few years.

I wanted to attend the metering events hosted periodically by the NFATalk guys, but it didn't work out until the most recent one (yesterday). I decided to put my money where my mouth was and made the long drive to go satisfy my curiosity and add a little data to his database. So I finally have some numbers! Maybe there's somebody out there who also grabbed the closeout deal who will find it useful. And I gotta say that I do feel a bit vindicated. No it's not the exhaustive back-to-back comparison that the engineer in me always wanted, but it's more than we had before and I was pretty pleased with the results.

I'm not going to do a detailed explanation of the Gen 4 product because it has been replaced by a different design, but basically it was very modular. What I did was test 3 configurations:

1. just the muzzle device--it spits a lot of gas out to the side because it's designed to send it into the section that goes over the barrel so the muzzle meter readings were pretty high, but it's a baseline.

2. just the over-the-barrel section added, which does not add any length past the end of the muzzle device but is quite long and does make a difference

4. I also got a 7.62 version of the Gen 4, but some of the sections are compatible with the 5.56 so I added the forward section which is longer than the 5.56 just for fun to see how low the muzzle numbers might go. I doubt it's a good idea to do a lot of shooting with this configuration, and I assume the manufacturer would not have approved of using it this way, but it was a fun experiment and I was happy to take the risk of something getting damaged for the sake of science. Maybe somebody will find it interesting, I definitely did. One thing that I did not expect is that the ear numbers never budged even though significant length was added. There may be something there worth talking about further.

I just realized now as I'm typing that I forgot to test one more configuration, which would be to use the longer 7.62 module instead of the short 5.56 module. I suspect that it would have knocked a few more db off the muzzle numbers, but for now I'll just have to add it to the list for next time, by which point I hopefully will have an AR-10 so I can also measure the 7.62 performance.

Here are the numbers--when I snapped a picture of the data sheet I missed the initial ear numbers, so when I get that from the NFATalk spreadsheet update I'll add it.

Something weird happened with the first shot in the longest configuration--I got a little excited when I heard those ear numbers, but after seeing what happened with the rest of the string I figured it should be left out of the average calculation. But I'd love to hear somebody's explanation for why that happened.

For those who don't know, these events use 3 B&K 2209 meters that are kept maintained and calibrated. If anybody wants to talk about the technical side of the equipment I'll leave it to others to discuss the details, but from following these guys and their events I know that they have compared their equipment side by side with the modern Pulse system and it's pretty consistent--the absolute numbers are a few db lower (I think this is usually seen when a 2209 is compared to the Pulse) but the numbers are pretty reliable for comparison purposes.

At one point OSS had this graphic on their web site. It's for Gen 5 but I don't think the differences from Gen 4 were substantial. Their published db numbers are supposed to be 6" from the shooter's right ear, and from what I saw with my numbers they appear to be reasonable. I think there was a lot of skepticism when those numbers were first published, so it's nice to confirm them even though we are years removed from that product line. 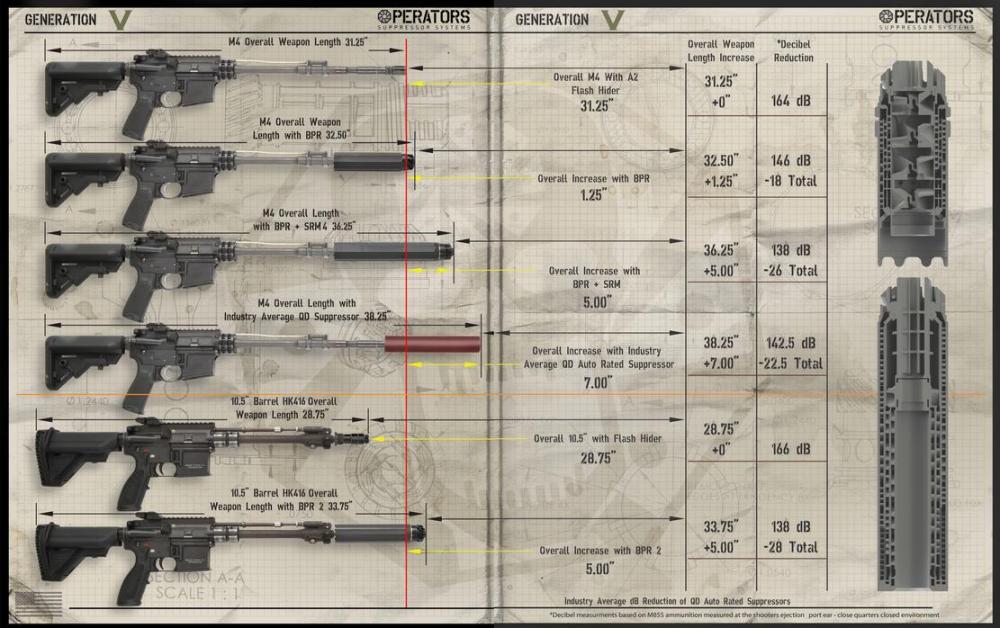 Thanks again tothe guys who made this happen! If you didn't go, you missed the opportunity to look at and shoot some very cool toys--some guys brought out some full-auto stuff, including an MG-42, which was pretty awesome to see in action.
Reactions: Crosswind and W54/XM-388

Yeah that's some good info, I'm glad he did that because it helped fill in some blanks with the current product.

The design is very different from what I have, but that's what got the military contract so it should be around for a while. I hope he will do more testing with that and others on a semi-auto platform soon so we can start seeing ear numbers!
Reactions: Clayman
Show hidden low quality content
You must log in or register to reply here.