anybody have one? what do you think,accuracy,reliability,functionality? some show as chambered 5.56,some 223. am i seeing wrong? 5.56 in a bolt gun chambered 223 still a bad idea or does it being a bolt change the allowable pressure/saftey level?

The downside is you're limited to AR mag coal, so there's zero advantage over an AR.

Something that takes accurate mags or the Tikka with mountain tacticals can run the eldm 75 off the lands, which is absolutely fantastic and smashes all things 223 gas gun.

But they should work fine and be reasonably accurate if you don't handload anyhow.

I bought one for my middle son. First thing I noticed was a wildly off centered bore relative to the OD. Sent it back and Ruger put a new barrel in it. Chamber is deeper/sloppier than every other gun I have, and I'm not about to size brass different for just one rifle so I just deal with the fact that maybe 20% of the brass will come out with split necks and a faint incipient case head failure line. All that said, it's pretty accurate, high velocities for a 16" barrel, polished the trigger down to 1.5-2lbs, it's in a Magpul stock and feeds well from modified AICS mags and has very successfully gone to 900 yards with 75 ELD's.
Reactions: MustangGreg66

They stopped caring about manufacturing these well. I mean I've had 5 in my hand in the past 2 years where the action is either so bound up it is unusable, the barrel bore is rough, or the called-for round doesn't chamber without forcing it. You find and buy a Tikka and move on.
Reactions: BLEE, TonyTheTiger and RUTGERS95
M

while not the oh my god gun of the year , if you do your part and the gun is straight you should be able to hit any target someone with a 5x's more extensive gun can . Your barrel will heat up pretty fast throwing as most of them come with pencil barrels throwing off your groups a bit when hot . You can always buy a better stock if you like it enough and are willing to shell out even more money . No doubt would be better off buying a better gun , but other people have ruger Americans and shoot with them all the time some without problems some with . best of luck with what ever you do or get .
A

I have a Ruger American..... I would not get another.
B

Mine is marked 5.56. I’ve had zero issues at all for 300 rounds. Shoots 69 SMK and 77 TMK @ MOA or better.
Yes the stock is not great and the bolt started out kinda rough but for what it is, it’s been great. I personally have had good luck with the American line. IMO.

The Ruger American line is a great budget truck gun. They're fairly accurate out of the box but know it has limitations. You'll either get a great one or a complete piece of garbage. Did I mention its a budget gun? It is what it was intended to be.
R

I have the Ranch 556 model. Awesome truck guns. Below is initial zeroing and two 3 shot groups at 100 yards with the RT6. Hornady steel match 55 HP 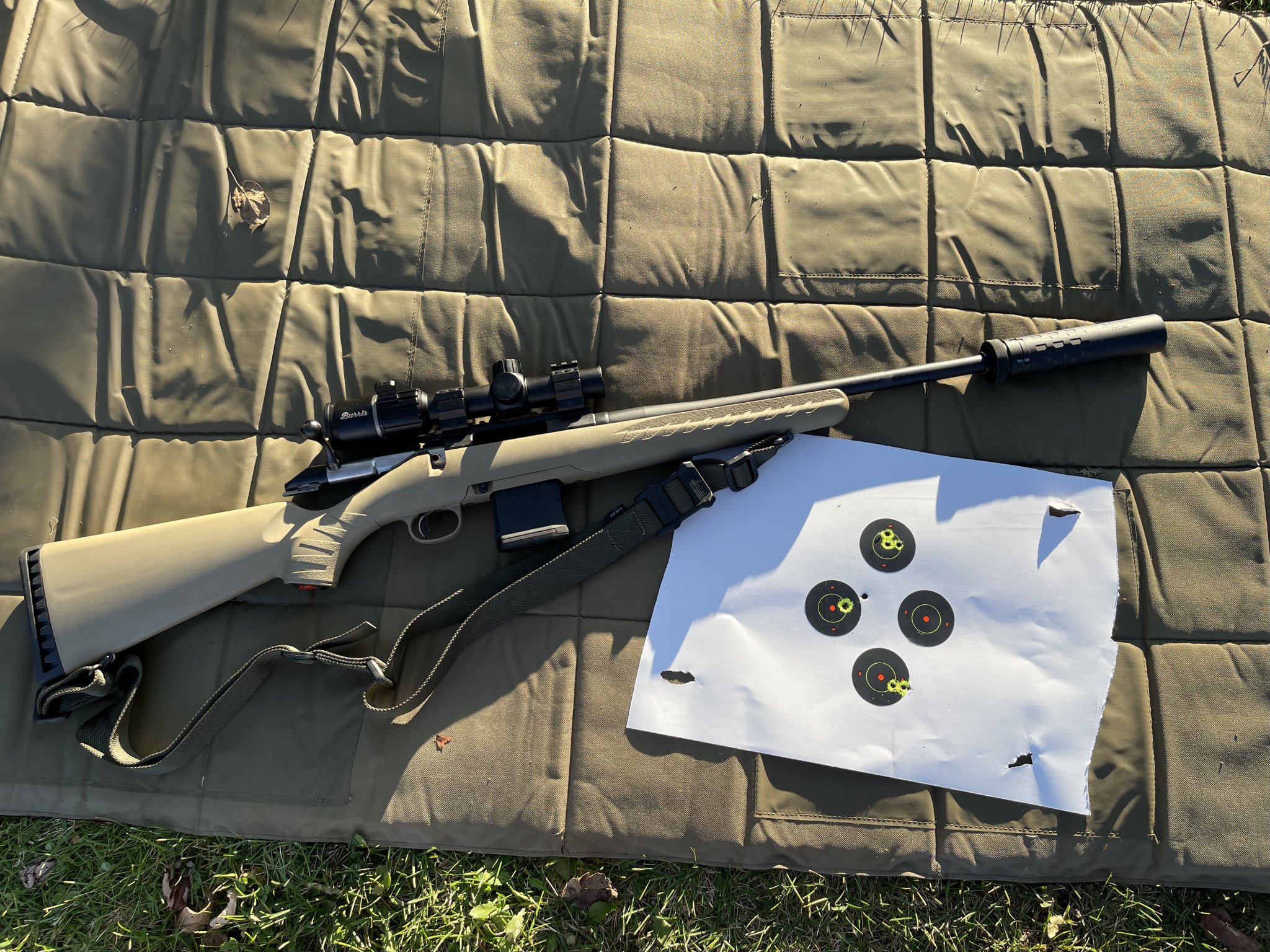 I have the earlier version that takes the Ruger rotary mag instead of the AR mags. Wish I had the AR mag version. I was planning on putting it in a Magpul Hunter, but Magpul couldn't handle the two versions, at least as of a few years ago. As it is, it is a pretty good option for a ranch or farm rifle. Reasonably accurate, decent trigger, threaded barrel. Stock is pretty bad. I think it occupies a pretty good place in terms of a bargain .223 bolt. But if you want to shoot small groups, I'd look at the Tikka, or build something that is a clone of your target guns. I don't ever shoot mine, at least not since I put a PVA .223 barrel on my Nucleus.

I don't agree that these somehow have less utility than an AR. With a can they are pretty pleasant and you would be hard pressed to burn the barrel out.
P

A friend has had 2 of the Ranch Rifles. One rotary and one AR version (still has the AR version). FWIW, those rifles have Wylde chambers, so no worrying about the whole 5.56 thing.
Both shot very well. The rotary version can be taken apart and dremeled/milled in the back to increase OAL (for 75 ELD’s).
Another buddy bought a .243 for his kid. I stuck a $150 Burris on it and it shoots cheap blue box Federal well inside an inch for 3. I did have to re-torque the stock and rail as everything was loosely-goosey out of the box.
I like the rifles and have been tempted by the predator models. The stocks do suck and there is a degree of “Ruger Roulette”.

The action I have is decent, but I converted my RAR 223 into a 6x45 for the price of a barrel. Played dress up a Boyd's AT-1 stock, accurate now as the OEM barrel would consistently group anything I tried in it.

I picked up a cheap used Ruger American .223 in stainless from Bud's back in 2016. Kinda shocked it was a 8 twist and will shoot 75/77 just fine. One thing I noticed is the chamber and freebore must be at the bare minimum...sucker is tight and does not like reloaded brass. Other than that I worked over the trigger , it weighs nothing, and is a handy little truck gun now.
Show hidden low quality content
You must log in or register to reply here.

S
Anyone got a Ruger Precision Rifle in .223/5.56 accuracy questions.

B
Advise me on a scope for my Ruger American in 5.56