Full disclosure: I've never really done an actual seating depth test before in my 10 years of loading for bolt guns. I've only really tried to duplicate factory match ammo dimensions with better velocity, SD, and ES. It works, but I wanted to actually see what magic could happen.

Ok, so, as part of my finalization of a magical load for my Tikka T3x Tac A1, 6.5 CR, I chose the Sierra 142 pointed Matchking to devote my love and attention to.... 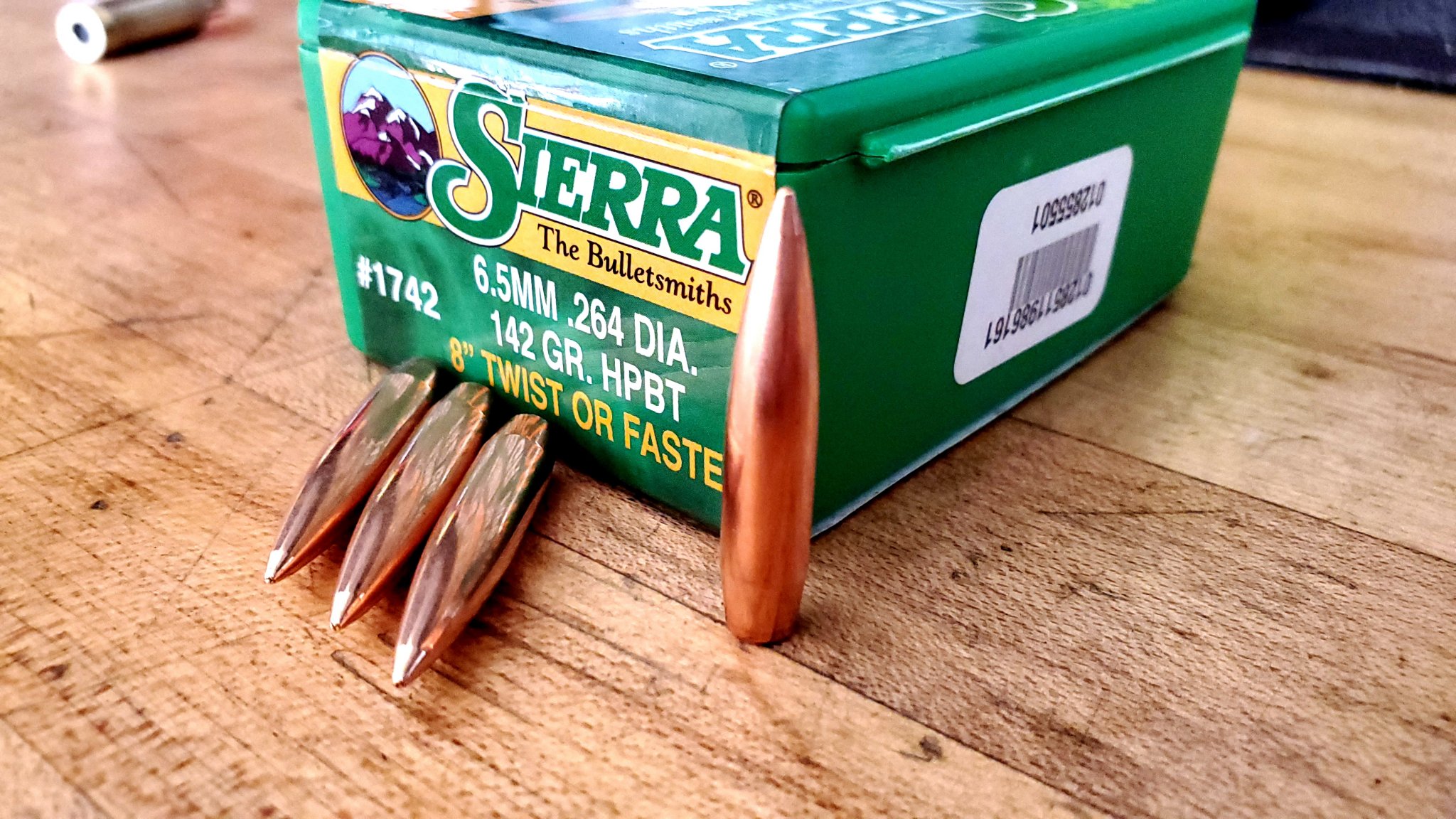 I shot a seating depth test starting at .030 off because this Tikka has a very long throat and if I were to touch the lands, I'd have just over .13-.14" of the bearing surface in the neck of the case. I'm not going to single load this, and I don't want to handle my ammo like I'm walking on eggshells.

Today, I did the test at 201 yards. 2 groups of 5 for each depth. One group aimed directly at the aiming spot, the other was 0.5mil right with my magnetospeed mounted. I dialed 0.5mil right and aimed at the same aiming spot.

Here are the results and I have a question at the bottom: 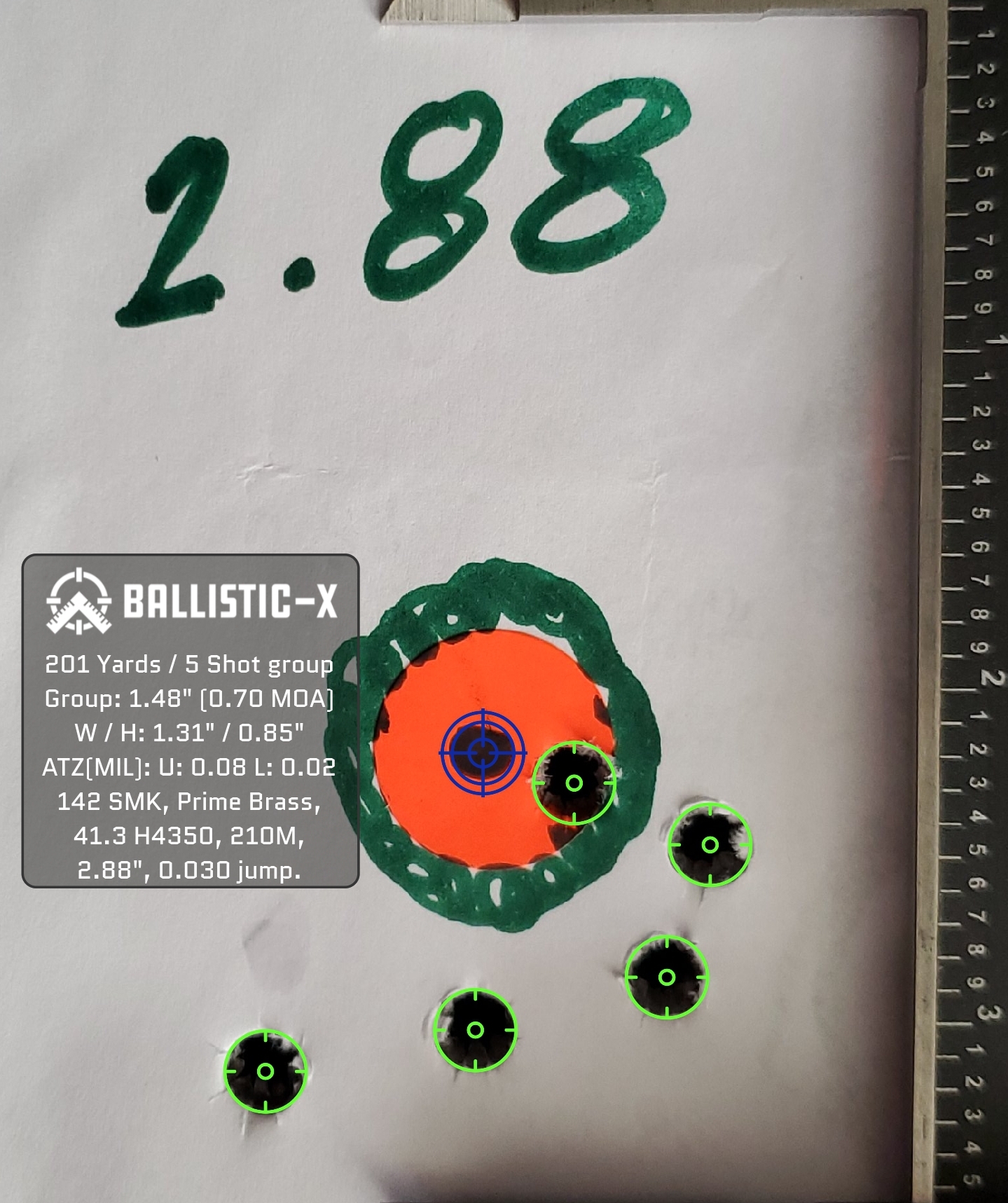 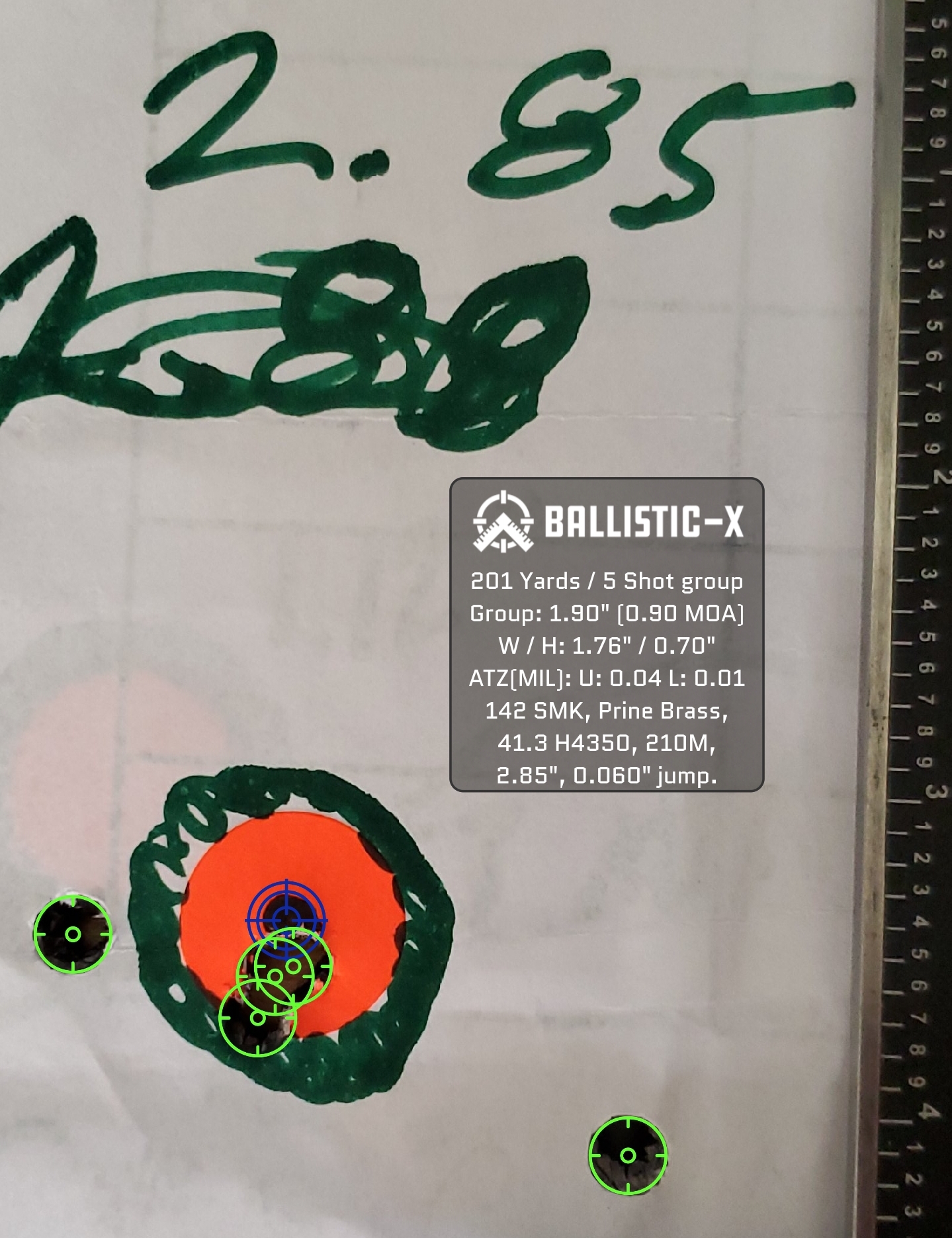 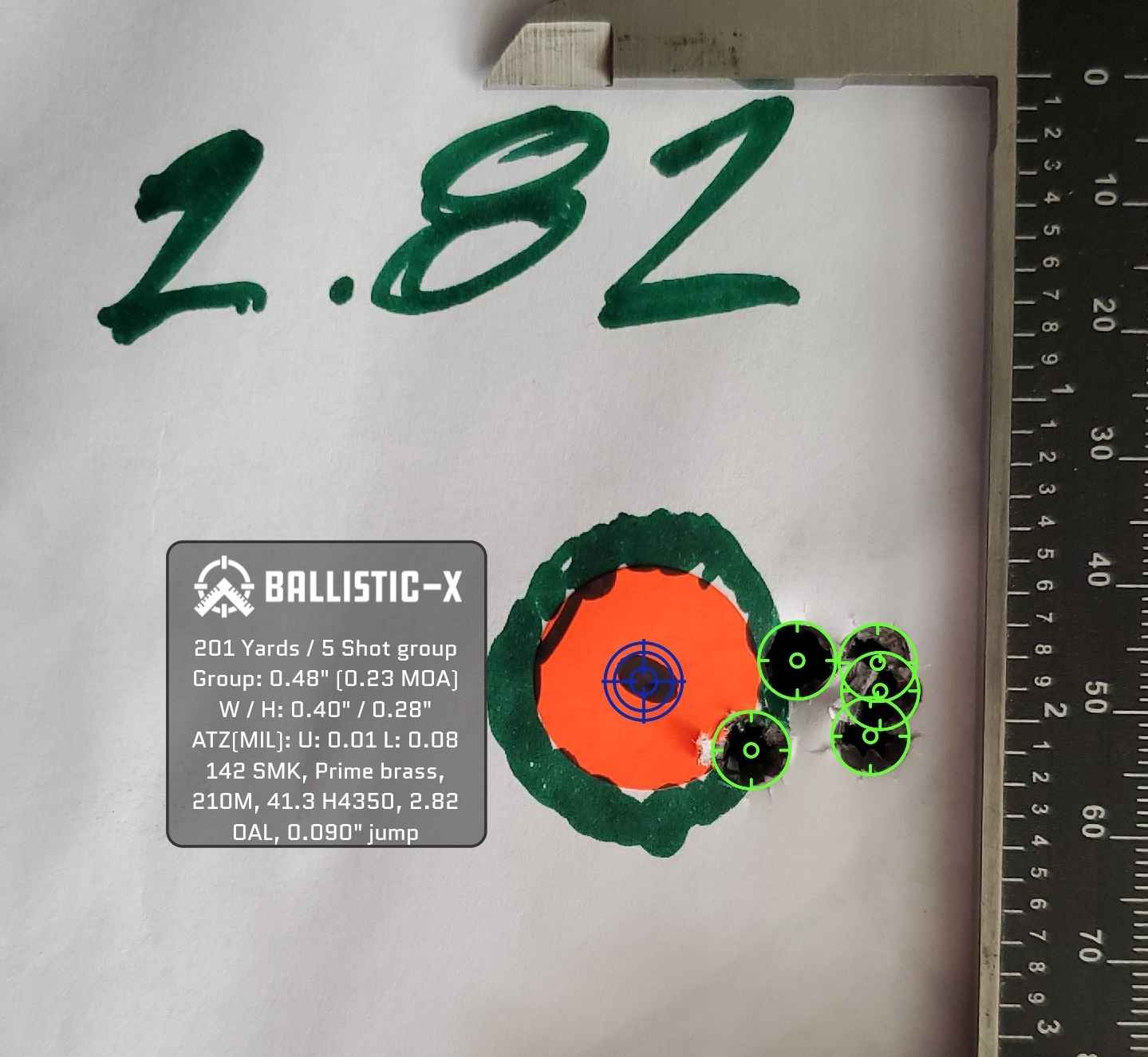 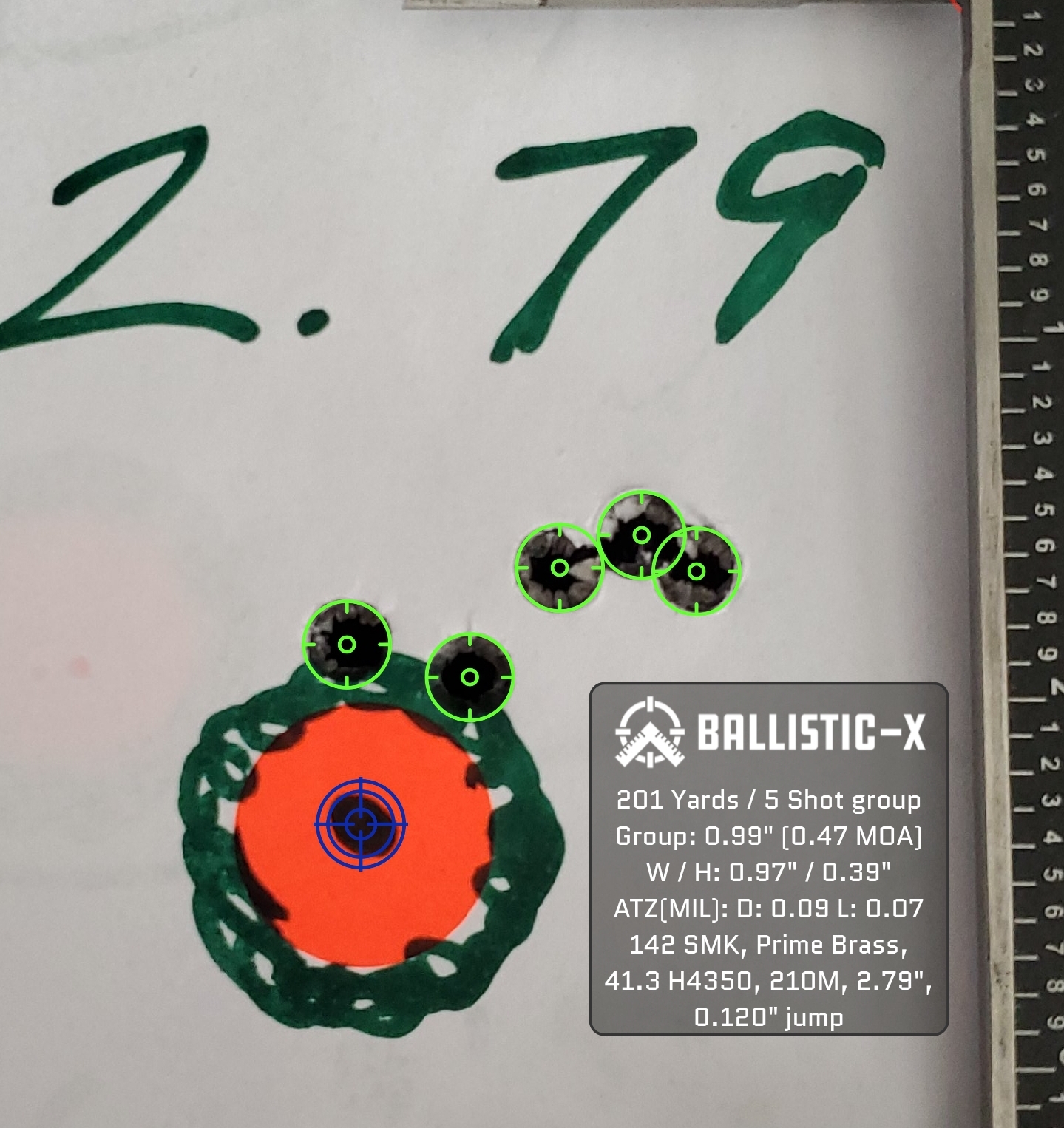 I'm thinking of going with the .090" because A. It had the best average group size between the two groups (also, 0.24moa is the best I have every shot ever in my life) B. The 5 shot velocity data is usually statistically BS and usually just a guide.

Question: Should I maybe look at the .120" jump? I ask because when doing a ladder test, we look for charge weights that have the bullet evit the barrel on the top of the sine wave upswing.

If you've gotten this far, thank you for your time, and any information or point of view would be greatly appreciated.
Last edited: Jan 16, 2020

Rocketmandb said:
What were your ES/SD with the .090" group.
Click to expand...

Okay - wasn't sure that was it.

Here are some thoughts:

I would work with .120 off in .003 increments. The group is tight as the sd/es is good. You can probably tighten it up a little more with fine adjustments.
Reactions: clcustom1911

Rocketmandb said:
Okay - wasn't sure that was it.

Here are some thoughts:

Thank you for the thought points. Good information to stew around in my brain.

I went with this style of seating depth test of .030" steps akin to Berger Seating Depth Test they lay out because, well, because they're smarter than me.

As far a stretching the load to 300 and beyond, not going to be able to do that until may or June.

I'll definitely play with the .030" and .120" with a couple .005" steps in each direction when I have time next. Gonna be traveling for business the next little while. Money is good, but cramps my shooting style ??
C

I did a similar test just last weekend - my thread:

https://www.snipershide.com/shooting/threads/223-and-308-load-development.6981080/
I think I'd re-do the test without the Magnetospeed - I've read about POI shift, fliers, and/or poor accuracy with it attached. Alternatively, or if there's still not a clear winner, perhaps do powder and velocity first, then leave seating depth for last.

Your .060 group is also a decent group. The 2 outliers could have been wind or you but 3 are stacked.

I saw what you posted about not being able to touch the lands...I'd start at your -0.03" and work up different powder charges, seeking accuracy nodes and pressure signs (max charge). Then, I like to back away from the lands on 0.001" increments and use 10 shot groups, using one of the accurate powder charges...I tend to go with the fastest accurate load I can use. I clean the bore and let it cool between the 10 shot groups, just to keep things all even-steven. Once I find a seating depth that is more accurate than the others, I chrono it and then I play with powder charge again but about 99% of the time, that original powder charge is good to go. This whole process usually takes about 150 rounds.

I then load up at least 100 rounds and start wearing out that barrel.
Reactions: clcustom1911

In that case, think I'd try 75, 90 again, and 105, to see where the group and velocity spreads are optimized. SD and ES for 090 wasn't great compared to others, but group was nice. Worth running again to see if she repeats.

I will be able to in like 4-5 months ?? work is gonna get in the way of my shooting for a bit.

Work always does that.
I am always amazed at what a few .001 will do to group size.
D

All the other groups around it, before and after, agree with each other as far as the number go. I would ignore the numbers on this one. Seating depth, within reason, doesn't have much affect on the velocity numbers unless you are playing around into the lands.

I would bet that the 5 on the orange target at 2.820 were just as tight on the numbers as all the rest. You could probably stay here and be just fine.

As far as positionally, 2.790 is in a better place because it is higher on the target, and therefore more probably at the top of the barrels nodal travel. It is also not very far from coming together. if you wanted, you could take 2.790 and go .005" either side and it would have a really good chance of coming together.

As has been posted. .030 jumps are too big. .005" jumps show better. You can possibly modify your sd by doing a primer test with your .090 off. But it appears you could run from .090-.120 off in .005" increments and find something that fits the bill. I have had luck lowering sd on rounds that shot well close by testing 4-5 different primers.

Thank you everyone for all the information. This place is full of great experience.

@kriller134 I forgot you shot the 142 SMK. I remember that combo was a hammer in your rifle when we were in the desert.

@Skookum thank for the perspective. Our assorted side bar/PM conversations about POI shift when I was doing my 7mm RemMag load development is what made me raise an eyebrow at the rising POI with the 2.79" group.

@Akaftermath I could have gone with a higher node in the 42.6 area (pressure was at 43), but I wanted my brass to last longer and, this is just me, I don't personally like loading at the upper node. I like doing the middle node because I like shooting in 100-110+ temps in the summer. Different strokes for different folks.
Reactions: Deleted member 113831 and kriller134

I definitely believe in seating depth tests and I do chase the lands. But something to consider is that your lands are probably eroding at a rate of 2 - 6 thou per hundred rounds. And with Sierra bullets you're probably looking at 1 to 1.5 thou extreme spread of bullet BTO measurement differences. If you have to be within .003 to have a good seating depth for accy and you want to test out to 120 thou you're going to go through a lot of ammo, barrel life, and emotional energy.

I don't have a lot of experience with long jumps. I only load two cartridges that way and there wasn't a seating depth test, they just shot well that way or they didn't. But the theory I hear about this from folks that do is that it's supposed to be less sensitive to eroding lands and varying seating depth inconsistency. Again, if 120 vs 123 is going to make or break you, I just wouldn't shoot that bullet.

Make sure you have a solid load developed before doing the seating test. I usually start by finding a good velocity flat spot. Then I test seating depth. I test at 100 so wind has less effect. I pick the tightest group and load. Also you probably won't need the Magneto for the seating test, ideally you should already have a load with low SD/ES and seating depth won't have a giant effect on that.
Reactions: clcustom1911

Also, when I think I have a good result I proof it 2 or 3 more times
Reactions: clcustom1911

My process changes as I live & learn, but at the moment I like to keep it simple:

----------
Magnetospeed goes on
• charge weight for velocity (looking for lowest SD, 0.2gn increments and a minimum of 10x cartridges per charge weight).

A lot of people will tell you that this is overkill, but from experience I've found that taking shortcuts here can send you on a wild goose chase, and you end up firing way more cartridges in the long run. I've lost count of the number of times I've thought I've been on a sweet spot after shooting 3x cartridges at a given charge weight, only to load up 50x cartridges and found they were actually shooting 20-30fps ES.

----------
Magnetospeed comes off
• seating depth for group size (start at max magazine length, and shoot 3x cartridge groups where you bump the bullets in, in 0.003" increments.


If you're shooting seated off a bench, you may be able to get your SD down by simply switching to the prone position.


It should be possible to get somewhere in the region of 3-4fps ES and 1.0 SD with a factory T3x Tac A1. My particular rifle liked Hornady dies with the elliptical expander mandrel installed, Hornady brass, Federal GMM LRP, H4350, Hornady ELD-M 140gn. I started at 2.820" COAL and worked my way in until the groups tightened up. 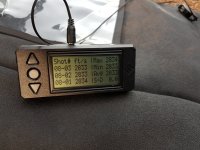 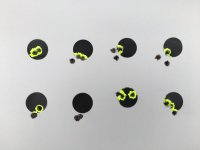 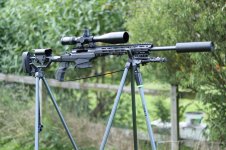