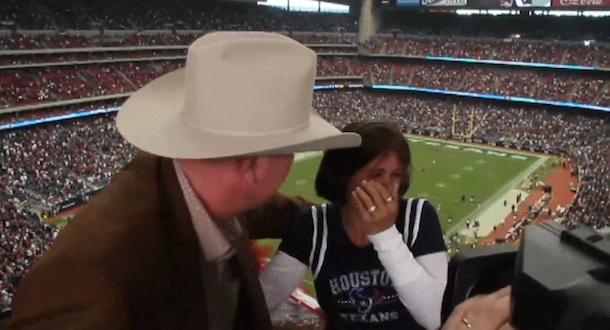 Marine Scott Wood died four weeks ago after suffering injuries during combat in Iraq. Before his burial, his wife dressed him in two uniforms. On the outside, Scott wore his military dress blues. Underneath, he wore the blue No. 80 jersey of Houston Texans wide receiver Andre Johnson.

Sara Wood had been married to Scott for eight years. They have a 5-year-old son together named Landon. Now he and Sara live in a single room in her parent's house.

When Sara got an offer to go watch the Houston Texans play the Carolina Panthers on Sunday, she jumped at the opportunity. She knew her husband would have loved to have gone to Reliant Stadium to watch his beloved team play. Plus, she and Landon had never been to a game before.

As described in a column by Tully Corcoran on FSHouston.com, the team brought Sara to the game under the pretense that she and her son would be part of a halftime ceremony in which Landon would receive a bike and Scott's memory would be celebrated by the 71,500 in attendance. Both those things happened, but a much bigger surprise awaited.

The team told Sara she and Landon would be receiving a custom-built, mortgage-free house in a Houston suburb. It's courtesy Operation Finally Home, an organization that builds houses for wounded and disabled veterans or their widowed families. In its seven years of existence, the charity has built 32 homes in 32 states, all mortgage free.

This home will allow the Wood family to stay close to family but have a place of their own. The hope is that she and Landon will move in next May. Scott won't be there, but that doesn't mean Landon won't talk to him.

"We told him he could talk to daddy in his prayers," she said, "and even in the middle of the day, you'll see him walk around the corner and you'll hear him say the 'now I lay me down to sleep prayer,' which Scott taught him. And then he starts talking to daddy."

There IS good in the world.

That is heartbreaking and wonderful at the same time. Very cool. Thanks for posting.

that is very cool

Absolutely amazing. Proof that there prayers are answered and good people still exist.

Thanks for sharing!
S

outstanding! good for them and those who made it all happen...

Thanks for sharing this. Thats awesome!!
S

Great to hear there's good people still in the world.

Definately needed that today...thanks for sharing.

Thanks You: Operation Finally Home

Thanks to all the people that help Veterans.
B

glad to hear there are those that remember the gift of giving at this time of year. Merry Christmas everyone.

Great story, thanks for sharing.
O

There is something in my eye...

Oh yeah, it the same thing I always get in there when good things happen to good people.

Thanks for posting this.
M

Something in my eyes also.
S

Man kind may make it yet.