I did 3 rounds each going up in charge on each consective shot, then starting again. Looks like my front mount of my scope rail is coming loose and caused a POI shift on perhaps the last of my 2nd ladder and the entire 3rd ladder is shifted up and to the right. Which does not make sense to me why it would move that direction. May have even screwed up the entire ladder test, you tell me if there is anything on this paper that I can use. The first ladder starts going left at the top and then the 2nd ladder is left and then the 3rd ladder is right and quite a bit higher.

300 yards - facing north, wind SSE 5-15 MPH gusting to 25. Shooting off a hill, down about 80 feet in elevation so less wind at the target. Almost no wind on the first ladder. Used my 84 grain rounds as 1,2,3. Then turned the scope down 1 MIL. Barrel was not clean for any of the shots. Most other shots are about 5 minutes apart when I could visually see the locations I shot 2 at a time. Left my gun and ammo in the truck over night so everything was about 40 degrees this morning. Same as outside.

So now I need some help on the results. Thanks. 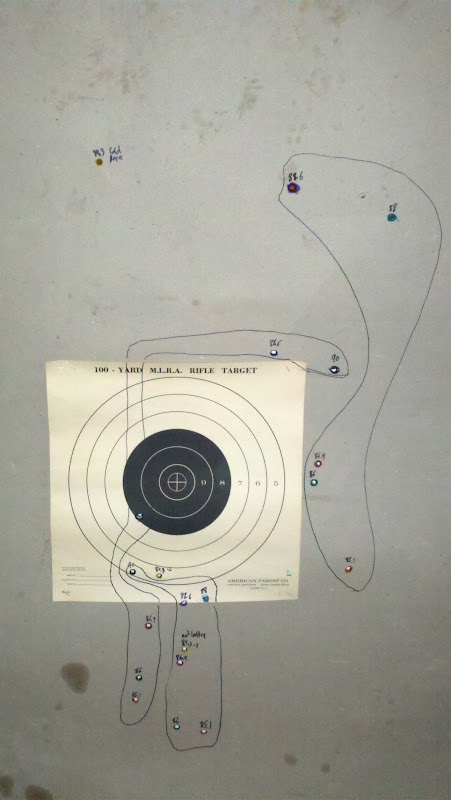 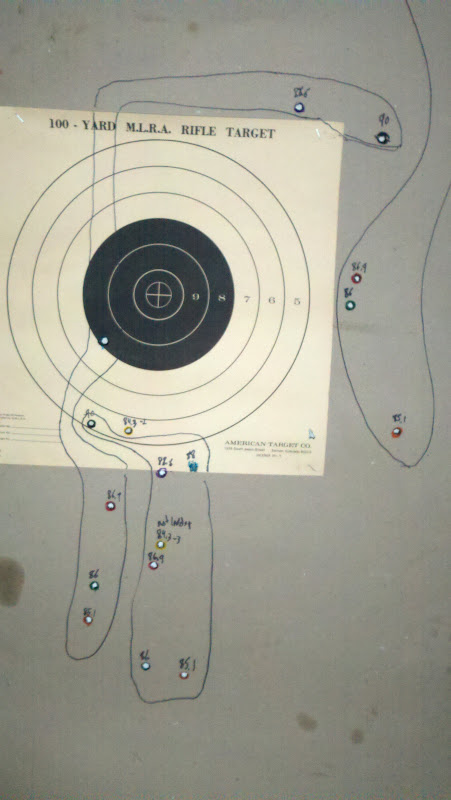 Don't understand the POI change but I wouldn't trust the test data with a loose anything. I guess re-torque w/loctite blue (allow to cure) and retest. Perhaps clean between strings w/fouling shots before each string. Maybe action screws not set to the proper torque (just in case you took it apart to have a look).

Rifle and target must be very stable. Avoid shooting off the hood of the vehicle. Terra firma or a super solid bench is best. Use sandbags and double check before each shot that the barrel is not resting on the sandbag or anything else. You can make your own for temp use by double bagging ziplock freezer bags and laying a towel over them for day use. If your using a bipod, test it with and without the bipod just to eliminate that as a factor (remove completely). Consider the shooter's position behind the rifle as it must be identical from string to string. This is basically like target shooting so if your sight picture is wiggly jiggly at all, due to wind, handshake, quality of your rest or anything else, go back and make it rock solid.

25 mph gusts are no bueno for lab work. I've seen wind gusts push a target all over the place and a ladder type target is kind of tall anyhow. I'm not really a range rat but using range facilities will go a long way in reducing variables when testing. I might also make the charge increments a smidgen closer together in even increments (.6 or .7 gr.). Add 2 or 3 more charges within your string + add 100 or even 200 yards more distance if possible. Expecting a 2 or 3 charge weight accuracy window, with a full grain spread per charge might be asking a lot. What your looking for is a vertical jumble of adjacent and reasonably close charge weight impacts to give you an accuracy window.

Nice colors on the holes.
D

Sorry but the targets are hard to read, especially the handwritings are small. However, I would go back and make sure that all screws are torqued to proper specs and stayed tight. Also, even with a 25 mph wind, at 300 yards, with the 300 grains bullets, it's not going to shift the POIs that far apart as shown on your target. I would redo your ladder test, unfortunately. I know that the Savage rifle is much more capable than that.
F

Full size pictures are at the link, which are much larger. However my penmanship has always been an issue. I think that was my only "C" while in school.
Color was added although some did transfer when shooting.

Yes I had issues with the gun. Front rail screws were loose and the front action bolt was not exactly tight. Not loose, but getting that way. I have since disassembled the gun and have been working on several items. Pictures were added to that link showing a few things. Pay no attention to the green clay. I have a thread going in the gunsmithing area too.

Wind moving the target was not an issue. Wooden pallet wired to two fence posts driven in the ground. Not much wind at the lower elevation. I will try to get a better day. The temps were great so I pushed on when the wind came up.

Most all this issue was mechanical, but I'm sure I'm not the best trigger person since I am learning. I was concerned after starting the 2nd ladder but thought the wind picking up some could have moved them left a little, but by the last shots of that ladder I knew something was probably up. I'm not THAT bad.
The 3rd ladder is a disaster and I should have quit.

I will reload and space them a little different as well as only do two ladders the same. I think the 3rd set is overkill. This was my first go at it and I didn't know what to expect. I will try to load some up to 94 grain and may just start closer to 87-88 grain and go up.

After doing that I will try to play around with seating depth some and be done. Then I may do the same with the 250 grain bullets.
F

All shots were taken from a gun vise on a concrete block. No movement. Only contact was the trigger. The vise was attached to the concrete.

This was 2 ladders with the same aimpoint so the holes overlap a little. I am now more confused than ever so I'll need some suggestions. The barrel was cold on the first ladder and warm on the second ladder. All shots are in order of charge amount working up in grains and were one after another with only a minute or so between shots. After the first 10 I waited for the barrel to cool down some, but was not cold.

Temperature was 35 degrees F and the wind was 4-5 MPH. No gusts. 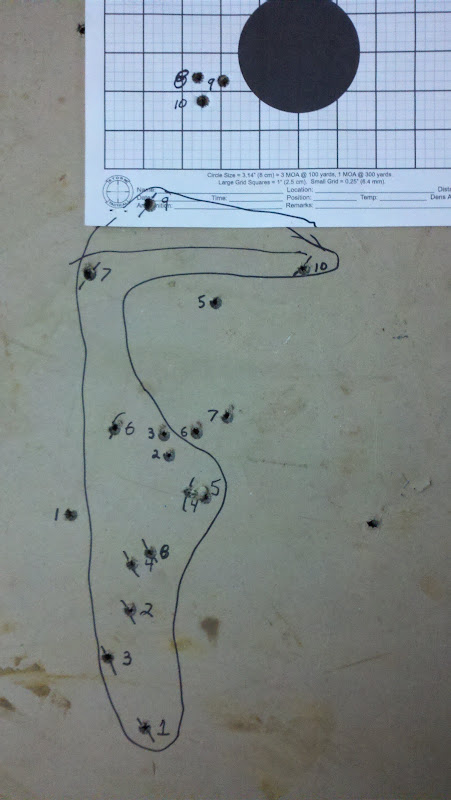 Correct me if I'm wrong but I thought the ladder test was one shot per charge weight of powder. Then you are looking for a node consisting of at least three shots in order with the least vertical dispersion. Those three shots or more will identify a node or range of powder charge to then begin loading a smaller charge increments and shooting 3-5 shot groups.

With shot 6 from both tests on the exact same vertical and 5 - 7 within a minute, I'd start there, 91gr. My personal hotspot is 90.1, so from an OCW perspective, you are right in the ballpark.
F

Thanks Cory. Yes I did more than one ladder. I figured one ladder was good, two or three would be better (look for a pattern) I only had 20 brass so I ended up doing 2 ladders of 10 this time since the first time was a bust.

I'm glad Cory said something because was focusing on 8,9,10 on the second ladder, but knew it was probably a fluke since I did not see the same results in ladder one.

20 brass is a limitation I have to live with for now.
B

Can you explain your thinking on #3 because I am not understanding why it is a candidate. I am about to just start loading and shooting groups.

I dont' see anyting about #3 that makes it a candidate for experimentation. Both 3's and 2/4 are pretty widely separated. I'd load 5 each of 91gr at .005 jammed, touching, .005 , .010 and .015 off. This presumes you already found max pressure with a jammed load to be more than 91 grains. You should always find the max pressue load at +.005 or so, pressue will go down as you seat the bullet deeper.
B

If you look at each ladder test in turn, 2, 3 and 4 are the closest together of any set of three shots. It is also useful to point out that in each case shot number 3 was an inflection point (the point at which the trend went from upward to downward or visa versa). In one case the inflection was up-down. In the other it was down-up. This all suggests that muzzle conditions are very stable at/around that powder charge.
F

I have not found pressure with these loads when jammed so I will have to be cautious. I did see some very slight ejector marks on the 92.8 and 93.4 loads with a 0.010 jump. All of those shots with those powder charges showed those minor markings with no signs in the primer and they came out of the chamber easy.
Show hidden low quality content
You must log in or register to reply here.
Share:
Facebook Twitter WhatsApp Email Share Link