As title states. I tend to shoot "low" when using a pistol red dot, admittedly only when shooting fast. So, at the risk of getting beat up..... Would it be an all-around terrible idea to adjust my RMR POI accordingly? My gut feeling is it's stupid and I need to address my fundamentals, but I just can't (so far) fix my problem.

Well yeah, you should fix you.
If you're dipping the muzzle, or dropping your hands when shooting fast, it's has nothing to do with the sight.

("Shooting fast" as in drawing and shooting or moving the gun and shooting? Or shooting fast as in multiple shots? If the latter, you may also have too much recoil spring (unnecessarily heavy) and that's what's causing the muzzle to dip, and not really your fault and it only shows itself when shooting fast.)

Need much more info to give a good answer past that.
That said, how much are we talking?
How do you use the gun most of the time?
I might be tempted to split the difference, so it shot a little high one way and a little low the other. But if it's mostly used one way and not the other, no.
Reactions: Maciej and 1911hombre

cas6969 said:
Well yeah, you should fix you.
If you're dipping the muzzle, or dropping your hands when shooting fast, it's has nothing to do with the sight.

("Shooting fast" as in drawing and shooting or moving the gun and shooting? Or shooting fast as in multiple shots? If the latter, you may also have too much recoil spring (unnecessarily heavy) and that's what's causing the muzzle to dip, and not really your fault and it only shows itself when shooting fast.)

Need much more info to give a good answer past that.
That said, how much are we talking?
How do you use the gun most of the time?
I might be tempted to split the difference, so it shot a little high one way and a little low the other. But if it's mostly used one way and not the other, no.
Click to expand...

Mostly talking about multiple follow-up shots, although still really any shot when I don't have time to squeeze trigger. Gun is used in a personal defense role and also carried in a retention holster when I am working at my part-time retirement gig at a LGS. I generally shoot at between 7 and 15 yards and group centers are 4-5" low. I can shoot slowly and group nice and tight.

Fix your shooting technique problem and you'll feel like a new man. "Cheating" your POA to make up for a technique error that results in a bad POI is a bad idea, mainly because we're responsible for every round that leaves our firearms, and you simply can't know what might happen if you make a habit of aiming negligently.
Reactions: Makinchips208 and 1911hombre

1911hombre said:
We’ll, that’s been my thought all along, but just can’t seem to get this to come together. I only have this problem with the red dot.
Click to expand...

Be sure you're shooting with both eyes open and target focused. Don't use the irons to find the dot, and don't focus on the dot nor the front sight. If the irons are a problem, put masking tape over them for training.
Reactions: 1911hombre

aftermarket trigger parts (smoothing and lightening the trigger pull) may help solve some of your problem. i know everyone wants a 'duty' trigger on a sd/hd gun, but keep your finger outside the triggerguard til you're ready to shoot and you won't have any premature ejections.

if you're not going to change your shooting habits (or lighten the trigger), then yeah i'd either know that you need to hold a little high under stress, or adjust your dot accordingly.
D

No. Always a bad idea. Fix the problem.

Couple of ideas:
Get a Mantis X and Practice the **** outta that thing (Dry fire).
We're talking thousands of pulls. Until that damn finger is broke. That way you ALWAYS pull the same way. Its burned into your hand.
If you are in a DA/SA that means you get really good at DA.

INCREASE your trigger weight for practice. It will make the problem worse, but you will absolutely learn to control that finger pull. You need to isolate your trigger finger from your hand--I had a lot of problems with low left, and even getting rid of trigger jerk, I had a sympathetic squeeze in my hands.

Some of us are cursed with bad habits (I'm on), you have to burn it out of your system with good practice.
Reactions: 1911hombre
M 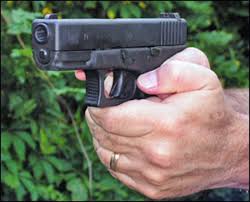 Do you think the 6.5 moa dot may be obscuring the target and making you aim low so you can see your exact POA? I can see this happening if you were aiming at something small and shooting fast. If you’re training some amount and you’re not doing this when shooting with open sights, I’d think it would be strange to suddenly have a compensation going on. I’m admittedly not a pistol expert though, just an observation. You could test this by adjusting the sight like you’re talking about and see it the same problem exists.

But yea, don’t leave the sight like that if it is you pulling it low. You should be able to fix it with a little work. I don’t shoot pistol a lot but when I do have to dryfire a lot the night before and even right before every mag. If I don’t I’m a mess lol.
Reactions: gigamortis and 1911hombre

Just my .02. I taught / trained LEOs for a long time. Your trigger press (or likely the lack of a consistent trigger press) is likely the reason you are shooting low when shooting faster. Your mind will automatically want to center the optics’s dot on the target. Your trigger press is the main influence that can cause your sight to move off the target before the gun fires. I always taught crawl, walk, run meaning you can only shoot (accurately) as fast as you can watch your sight (dot) lift and recover (from your poa) on the target. Speed comes from a fast but proper and consistent trigger press.

You mentioned that when shooting slow you shoot accurately and your poi is at your poa. That indicates to me that you are pressing the trigger correctly when shooting slow, but differently when you shoot faster. Without watching your trigger press I’d wager your slapping or aggressively pressing the trigger as speed increases. This often will pull the muzzle (sight) down causing you to shoot low. This isn’t a problem when you’re at contact distance or within say 3 yards of a threat, but as distance increases or as a more precision shot is required, you need to change the way you press the trigger so as to not induce muzzle (sight) movement causing you to shoot low. With the initial trigger press (gun drawn, made decision to shoot) make sure that any slack in the trigger is taken up (as you present the pistol to the threat) until u feel resistance (the wall), at the wall confirm the optic/sight and then continue the trigger press until the gun fires. This sounds like a slow process, but it actually can be done very quickly, but needs to be done consistently and the skill needs to be internalized through proper repetitions. After the first shot, attempt to reset the trigger and not take your finger all the way off the trigger before pressing the trigger again. This is happening as you watch the optic/sight lift (from recoil) and recover back to the target. When shooting quickly, the dot/sight will appear to be a blur tracking up and down. When your trigger press becomes sloppy or inconsistent you will start to induce influence on the muzzle, generally causing shots to go low or low left if a right handed shooter.

If you have access to a shot timer, stand 7-10 yards in front of a target. On the beep draw your gun and fire six shots at a point of aim on the target at speed that allows you to keep all your shots on a 3” dot. Focus on watching the dot lift and recover. Check the time and record it. Now continue to do this drill, slightly increasing your speed. Evaluate / record each attempt for accuracy and speed. Ensure you are properly and consistently pressing the trigger as you increase speed. If you start shooting low, evaluate your trigger press. You don’t need splits any faster than .25. Anything faster than that and you’re not really seeing anything and you’re just ripping the trigger. Remember your not looking to fire a double tap or hammer pairs. You need to have a site picture for each trigger press. Using one sight picture for two trigger presses means that you’re hoping that the second shot goes where the first shot was aimed without knowing where the sights actually were when you fired the gun the 2nd time.

Thank you all for the replies! Lots to process. I will try some of this tomorrow, and will update.

So you’re shootings a Glockoff.
Let someone else try it.

1911hombre said:
We’ll, that’s been my thought all along, but just can’t seem to get this to come together. I only have this problem with the red dot.
Click to expand...

You need training. I can almost guarantee that you are focusing on that red dot as if it were a front sight blade and jerking the fuck out of the trigger when the dot is where you want to because it moves around so much.

Your visual focus needs to be on the target, not on the dot.

You can't see that much movement with your other pistols that have irons because irons don't show you as much as a red dot.

It's possible that you are using the top of the red dot at speed rather than the center of it.

gigamortis said:
It's possible that you are using the top of the red dot at speed rather than the center of it.
Click to expand...

Thats not really realistic. A 6moa dot at 10 yds takes up 0.6" on the target. Aiming with the top vs the center, if you could even hold it steady enough, yields a 0.3" difference.

Secondly, you don't "use" the dot. You keep your eyes focused on the target and allow the dot to superimpose over the target area you're looking at and fire. As the dot moves up and down with recoil you don't follow it, you continue looking at the target.

He's either slapping that trigger and/or following the dot with his eyes instead of looking at the target. It's probably both.

@1911hombre - highly recommend quality training, or at minimum look up any of the following youtubes or IG's and listen to them talk about using a red dot:
Sage Dynamics
Modern Samurai Project
Ben Stoeger
Last edited: Sep 27, 2022
Reactions: Bluedog82, DIBBS, 1911hombre and 1 other person
5

Find a good GM that gives lessons and take a couple. You will be amazed at how much you can learn, and they will spot your bad habits right off the bat and start working on corrections.
Reactions: 1911hombre
Show hidden low quality content
You must log in or register to reply here.

First time shooting past 200 yards and in any real wind. Why so low at 300 yards?