Somewhere down in TX

If you've got some details on your 243 doing 4,050 ft/sec with 55ger's why not share your results ? I know this thread seems to have got side tracked but i would be interested in your 6x284mm that you use the 55ger's in as i'm sure the other guys would , not sure about a 243 with the 55ger's & 100ger's both shooting well from the same twist
B

Somewhere down in TX

You have to have twist to stabilize bullets but "over stabilizing" is somewhat a myth. The 6/284 wore a 27" Krieger 9.0 twist and easily shot 1/4MOA 3 shot groups at 100 on calm days with the 55s. I didn't expect such speed when I first started experimenting w light bullets but it sure turned heads including my own at the range. I used an old school Oehler so I'm confident in the numbers.

I agree about 'overstabilizing' being a myth. However, when combined with extreme velocity, too much twist rate will flat out destroy a bullet. As it goes, exteme velocity can actually help to make up for an otherwise insufficient twist rate. IE, you can use a slower than recommended twist tube for a given bullet, IF there is sufficient velocity to generate the RPM needed to stabilize it...

I changed the scope at the weekend on the Middlestead instead of cutting the grass for the last time .

... and accurate data logging isn't a sin my friend!

Got one this morning.

Just a little guy... might have still had milk on his lips. I'm skilled with a camera, but I must confess, this is the smallest coyote I've ever shot. I'm helping local farmers with a coyote problem, and I swore to them I'd kill all I could, so he had to die. He came in to some coyote sounds, and when I tried some distress, he acted like he didn't even know what it was. I caught him broadside at 190yds and sent it. I had a gusty 10-15mph wind going at 9 O'clock. Held for .5 mils but needed about .6-.7mils, which caught him right in the diaphragm. He was quartering toward me a bit and the bullet exited a bit behind the diaphragm. Couldn't find the entrance, with a teeny tiny exit. However, the impact literally "popped" him. There was about 5" of fur/hide ripped open on his back, yet the membrane underneath was completely intact. I'd post a picture of it, but I don't want to offend anyone's sensibilities if they don't like seeing exposed flesh. Strangest thing I've ever seen. He was borderline about ready to explode like a prairie dog. lol

Anyway, the new puppy slayer is doing well. Now I just need a normal sized dog to get some real testing done! 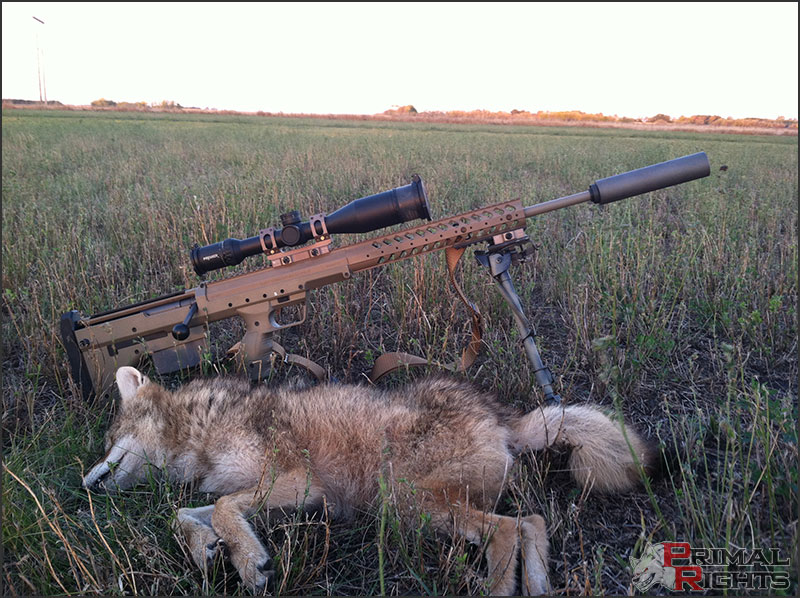 Very nice shooting there. What load were you using?

That's a lot of barrel wear in the AI process , I'm curious to know why you went with all those calibers that do the same within a few hundred feet of each other ?

If the fire forming process isn't your thing don't go for it. For me, it's not enough wear to even matter. Not to mention that they're surprisingly accurate while forming. The swift was set up to run 55-60gr pills. The other two are setup differently as far as weights and barrel lengths. Not to mention the 22-243AI is a single shot. I built the 22-243AI then decided to rebarrel the factory 22-250. Figured why not bump it up while I was at it. I run a 6br and a 6x47 also. Similarities don't bother me.
Last edited: Oct 12, 2013