Hey gang... new to these forums, so be gentle. I did search the forums for similar and found some info that I found useful, but wanted to ask the question anyway to see if there is any additional info specific to this situation.

Took it out to the range a couple months ago when I first got it to zero the scope. Everything was fine... rifle definitely out performs the shooter.
Couple months pass, and I picked up a bench rest and bags and decided that I wanted to re-zero the scope to fine tune it. Just used bi-pods last time. Crude I know, but was good enough to be effective.

Went to the range, and proceeded with zeroing the scope. Was using factory S&B 168gr HPBT rounds for this. Everything was on point. You can see the final result of the zeroing. 3-shot group at 100yrds. So I was pretty happy with this.... then I switched over to test several small batches of some hand loads. 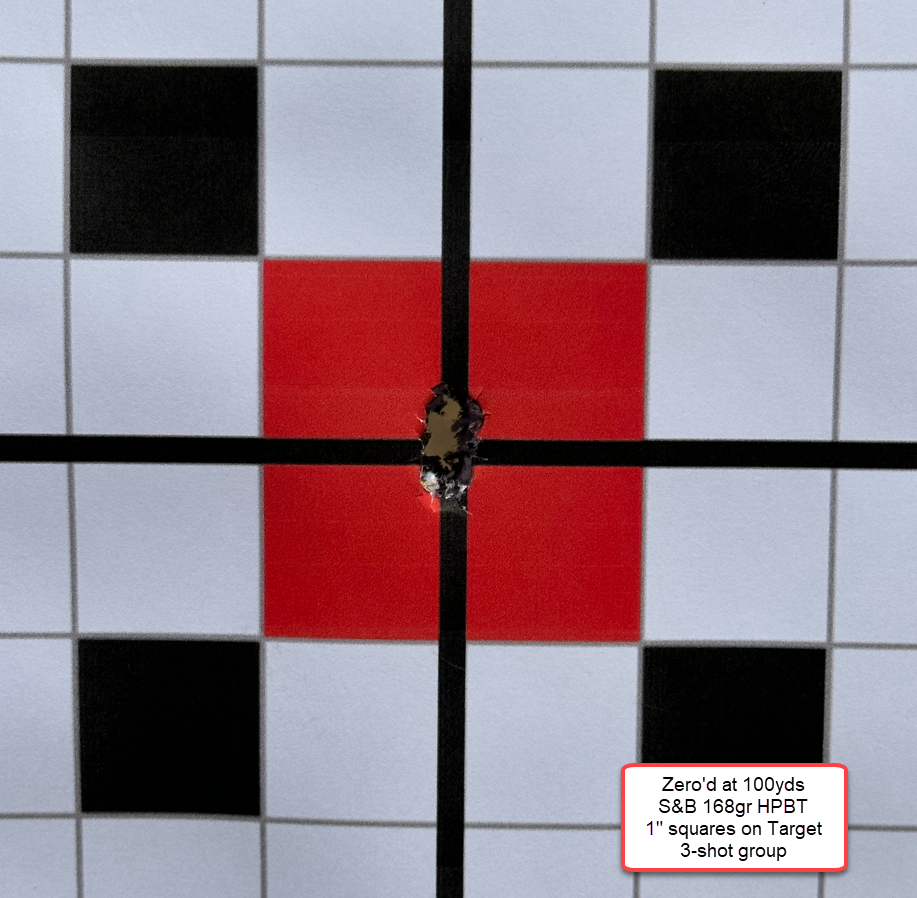 The hand loads use Barnes 168gr TTSX BT. The accuracy and precision was dreadfully bad, and after collecting the velocity data across several small batches, I just assumed that my hand loads were just garbage.

As such, I opened up a new factory box of Barnes VOR-TX 168gr TTSX BT. Put several rounds of that into this group and it performed just a poorly as my hand loads. Only commonality between the hand loads and the factory loads is the same projectile. 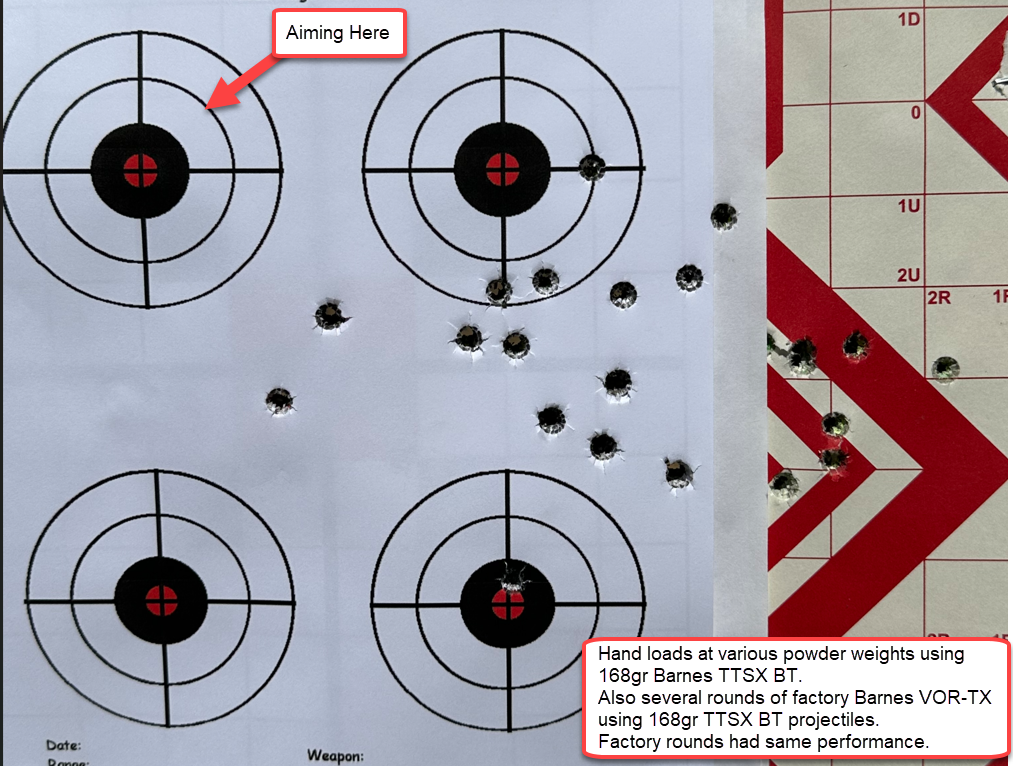 As I said, I thought my hand loads were just terrible, but since the factory ammo performed just a poorly, that made me pause.
I really expected the factory Barnes ammo to at least group well, even if not dead on since I zeroed with a different bullet.

Unfortunately, I did not have any S&B ammo left so I did not get a chance to send a few more of those rounds to see if it was just the ammo or something else.
Checked all scope mounting hardware, muzzle brake, etc and nothing off there.
I am going to clean the rifle really good and I have a borescope on order so I can inspect the barrel better...
I know some rifles can be finicky about ammo, but surely this is a bit extreme, right?
Also thinking about copper fouling in the barrel... I wouldn't think so much since I just had near perfect performance minutes prior... and I would think that would be a more gradual degradation and not some thing so sudden and severe.

I know the S&B ammo uses a copper jacketed projectile and the Barnes is a solid copper projectile... but surely that can't be it, can it? I haven't seen any notable negative reviews of the Barnes factory ammo or these specific bullets, so I would expect to get decent performance from them.

Anyone else run into similar issues and is there anything else that I should be looking at?

First of all, welcome.

My guess would be something came loose. scope rail, scope rings, action from the chassis. Did the shots progressively walk from left to right? thats a pretty big spread.
Reactions: Vivacious Stallion
F

2aBaCa said:
First of all, welcome.

My guess would be something came loose. scope rail, scope rings, action from the chassis. Did the shots progressively walk from left to right? thats a pretty big spread.
Click to expand...

Agreed... I did check all the screws/mounts, etc... nothing loose, no wiggles... even re-torqued to be safe...

No...the shots didn't progressively walk left to right... they were just all over the place... the shots did walk slightly upwards with each batch of the hand loads since the powder charge was increasing slightly with each set.

In hind sight, I should have used separate targets for each batch, but I was mainly interested in collecting the velocity data, and I just assumed the performance was due to that... I was a little shocked when the factory ammo did the same...

Now, a Public Health Authority for the Shadow Gov

The Streets of USA

Sometimes things happen/break. I had an 18" ar15 that was a proven performer suddenly start to fall apart accuracy wise in a wide downward vertical spread last year. Turns out the vertical erector in that scope (xtr2) had failed and was the cause.

Check that everything is torqued down and then if issues are still occurring try and swap to another optic.

I would just some it up to it didn’t like the other ammo. Do a proper load work up and I am sure you will find something good.
Reactions: pabrousseau and spife7980

First thing I’d do is swap ammo. Back to HPBT in the SB or something similar. Before I’d go changing everything else

Some rifles just don't like a particular bullet. If it doesn't like TTSX don't feed it TTSX. I have a 7BR that will simply not play nicely with 154gr SST's but it'll spit 150-168gr just about anything else into nice little groups. An accurate rifle might not be so with ammo that makes its tum tum hurt.

ETA: Monolithic bullets being finicky was a big problem when they first came out. Better alloys have been developed over the years so it's not such a big issue today but that doesn't mean it's disappeared entirely.

I concur with what others have said. Change bullets before changing anything else.
You wouldn't be the first to have issues with Barnes bullets, they can be finicky.
Buy a box of these, they usually perform.
Maybe not quite as good as nosler CC or sierra smk, but we're testing a theory here. 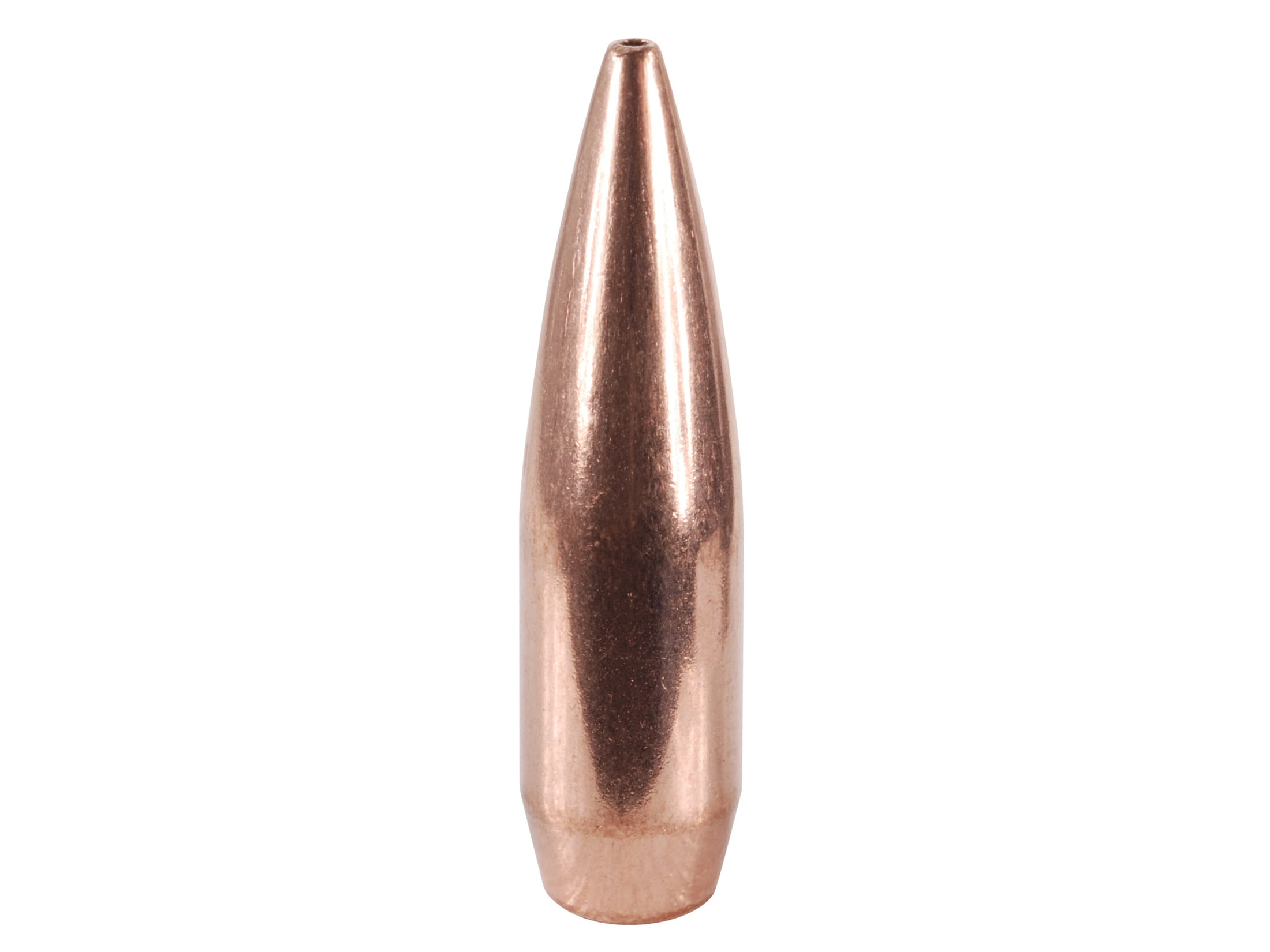 2x winner of the internet

Clean the barrel real good. Then do over.
Reactions: cooper_257
F

hafejd30 said:
First thing I’d do is swap ammo. Back to HPBT in the SB or something similar. Before I’d go changing everything else
Click to expand...

This is my plan for the next range trip... before I start chasing things down a rabbit hole.

I did do a thorough cleaning. Nothing unusual about how dirty it was... mostly carbon... but should have my borescope in a couple days so will give it a more thorough inspection at that point.

Just wanted to say thanks to all the responses thus far... been helpful in validating some things I was already thinking and giving me some other things to consider.

I am glad I found this thread again. I wanted to give you my experience in the last couple days with TTSX and Barnes factory ammo in 338 winchester mag.

In my recent experience, you need to reload to get the Barnes TTSX to really shoot.

You should be 2.5 MOA all day with that price level of a rifle with a good trigger pull.

Just a few thousandths of an inch of movement of the rifle barrel side to side or the scope right when you pull the trigger or at the start of the recoil pulse will cause large groups like that at 100 yards.

Some things to try:

0. Borrow a different stock with a bipod on it and swap the receiver/barrel scope into it and test.
1. Get a Harris bipod. Magpul bipods are bad. They are very unstable and will move when the recoil begins.
2. Make sure barrel is free floating
3. Make sure receiver is not moving in the stock. Make sure action screws are torqued right and stock mates up with recoil lugs.
4. Make sure pic rail and ring mount actually do not move.
5. See if scope is consistent.
6. Does the bolt move when you dry fire? Does it securely lock?

Some of these will require finding a buddy with a 308/scope to swap stuff to test. And/or get a laser boresight.

Last time I had this many issues, it was everything about the rifle. Some rifles are fine for hunting in the Deep Woods but are useless past 100 yards and soul stealing when used for PRS.
C

Barnes bullets copper fouling dosent play well with other bullets fouling. clean your barrel good before changing back and forth. I shoot barnes TTSX in a couple different rifles and if I shoot conventional jacketed bullets then Barnes without cleaning they don't group worth a shit.
Reactions: NH4X

I had a Viper HST come apart internally one time. It would be dead on, then I couldn't hit crap. It's been a long time ago, so I don't remember what the groups looked like, but I do remember being frustrated as hell. I sent it in and they sent it back repaired. I sold that scope.
Show hidden low quality content
You must log in or register to reply here.

Is this a Factory or a Lightweight Remington 700 Firing Pin?