My new Thomas HPX 22 caliber rifle showed up recently after a 4.5 month wait. It has a custom match grade 26" barrel of proprietary rifling dimensions spec'd out by the builder of the rifle - Mike Niksch of Thomas Air. It gets approximately 70 shots per fill from 4000 psi to 2300 psi where it falls off the regulator. The pellets used are JSB 25.4gr MRD's going 920-ish fps, the Bc is .053 which is 1/3 of a 40gr 22rf bullet. The trigger is a two stage that is set to 3.5oz and is truly amazing crisp. ERGOS are wonderful as well! It's a bit heavy for an air rifle, with scope it's 12.5 lbs.

Here's a C&P(with a few revisions) from another website that some of you airgun guys will recognise but I thought the Snipershide guys would like to see and read about it too.

I have appropriately named this rifle "SURELY". The story behind the name I chose is from back a few months ago when I was texting my buds on Team Centercut the shooting team I belong to, the photos of the groups Mike Niksch of Thomas Air had just sent me. I think it was 50 shots he did with his HPX inside 1/2" at 50Y and also a 22rf BR target for 3 cards he shot at 50Y which scored 749! It was then that it occured to me that if I missed it was "surely" going to be my fault, and also that a gun capable of such precision was "surely" going to help me to win sometimes!!!! It also sounds like Shirley just for the fun of it. So there you have it.

and decided to call up custom stock maker Steve Corcoran for a specific HYBRD stock I had been contemplating. Basically since I wanted to shoot both BenchRest comps, and Extreme Field Target comps, I wanted a stock that was equally good for both disciplines. Instead of going into all those details well here it is. The stock was created by Steve to be able to remove, lower, or rise, the cheek piece. Move the butt pad up, down, in or out to change LOP, as well as angled left or right – away or into the shoulder. For BR(see pic #5) I can also attach either the tall or the shorter rear bag riders underneath the bottom of the rear of the stock and underneath the front of the stock is a T-slot rail in which the 3" wide wooden front bag rider can be attached, or a picatinny rail which I can attach my bipod to. Steve was great to deal with and he also came up with the design you see here.

(last week) - Due to bad weather, etc, I've only shot 35 22 caliber JSB MRD's through it today off a bench on my 50Y spinner. I doubt I would have missed a dime and it was fairly windy out. I'm very pleased of course!
(As of today 2/22/21) - Since I've had the rifle for nearly two weeks now I've shot it more, just over 200 pellets, so I'll post some more recent pics as well. The pics of shots on the BIG steel are with me sitting on a 3 gallon bucket and using a pair of shooting sticks to steady the rifle.

Thanks Mike for such a fine rifle, and Thank you Steve Corcoran for such a unique and pretty walnut stock! 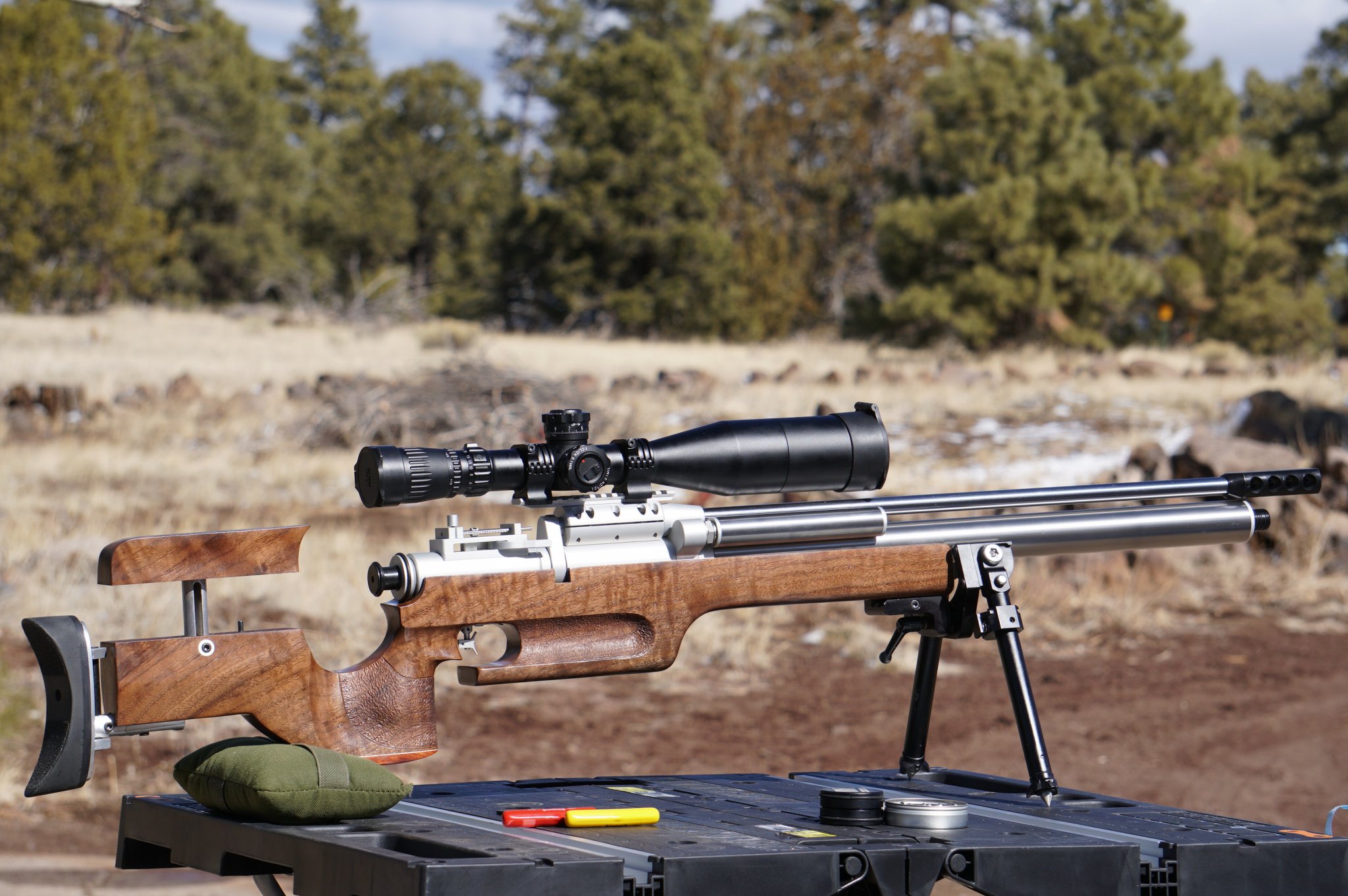 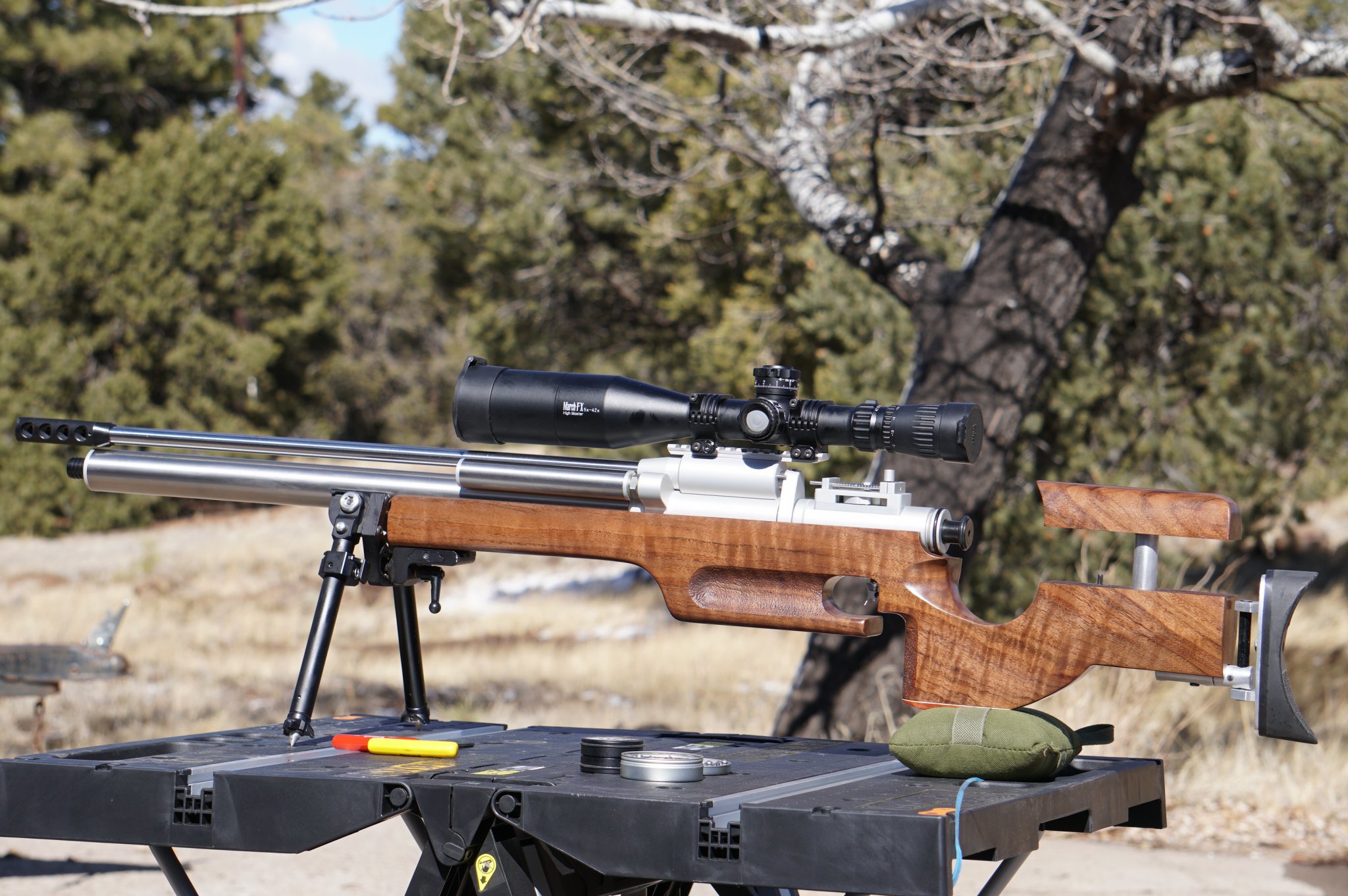 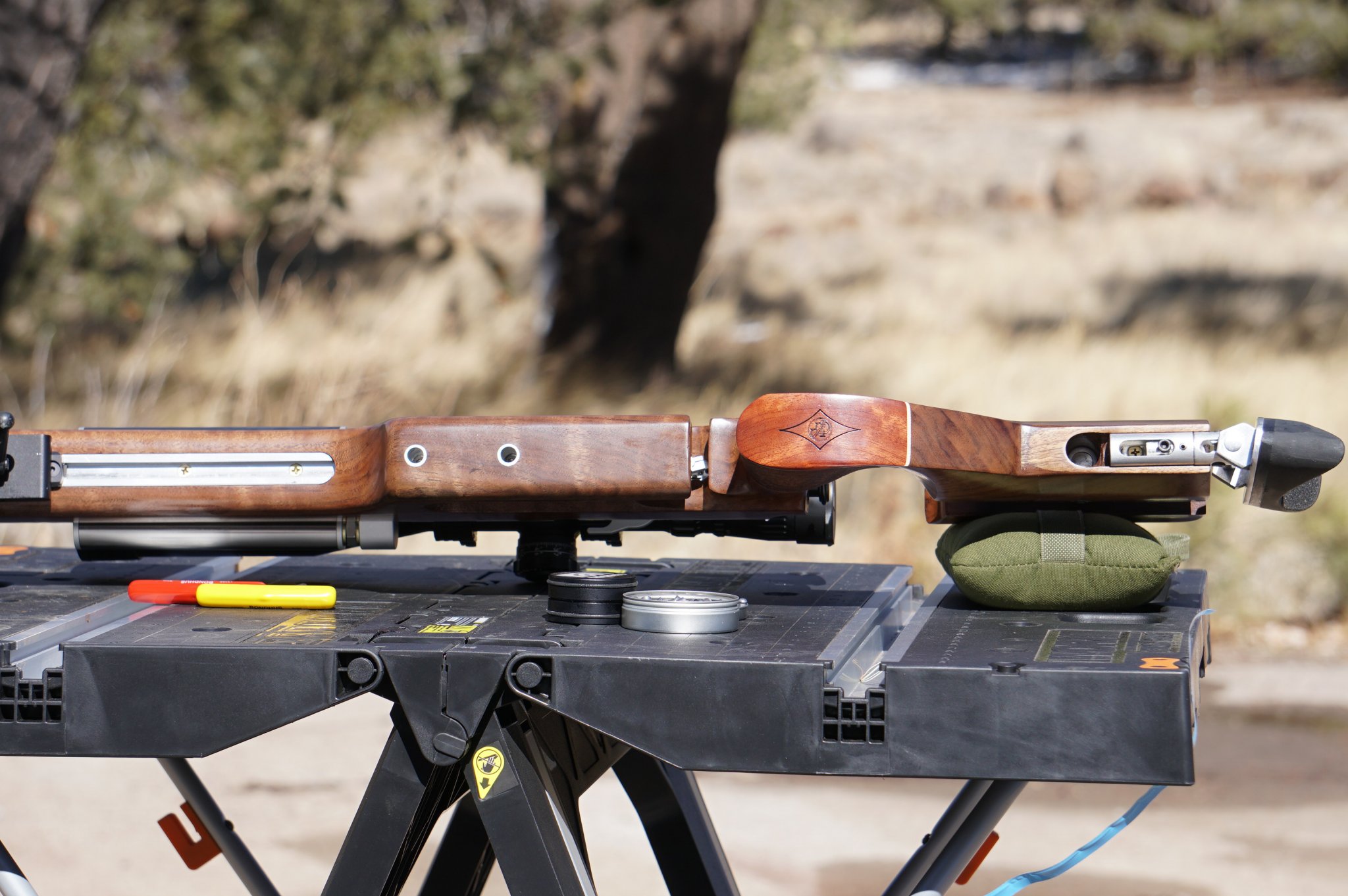 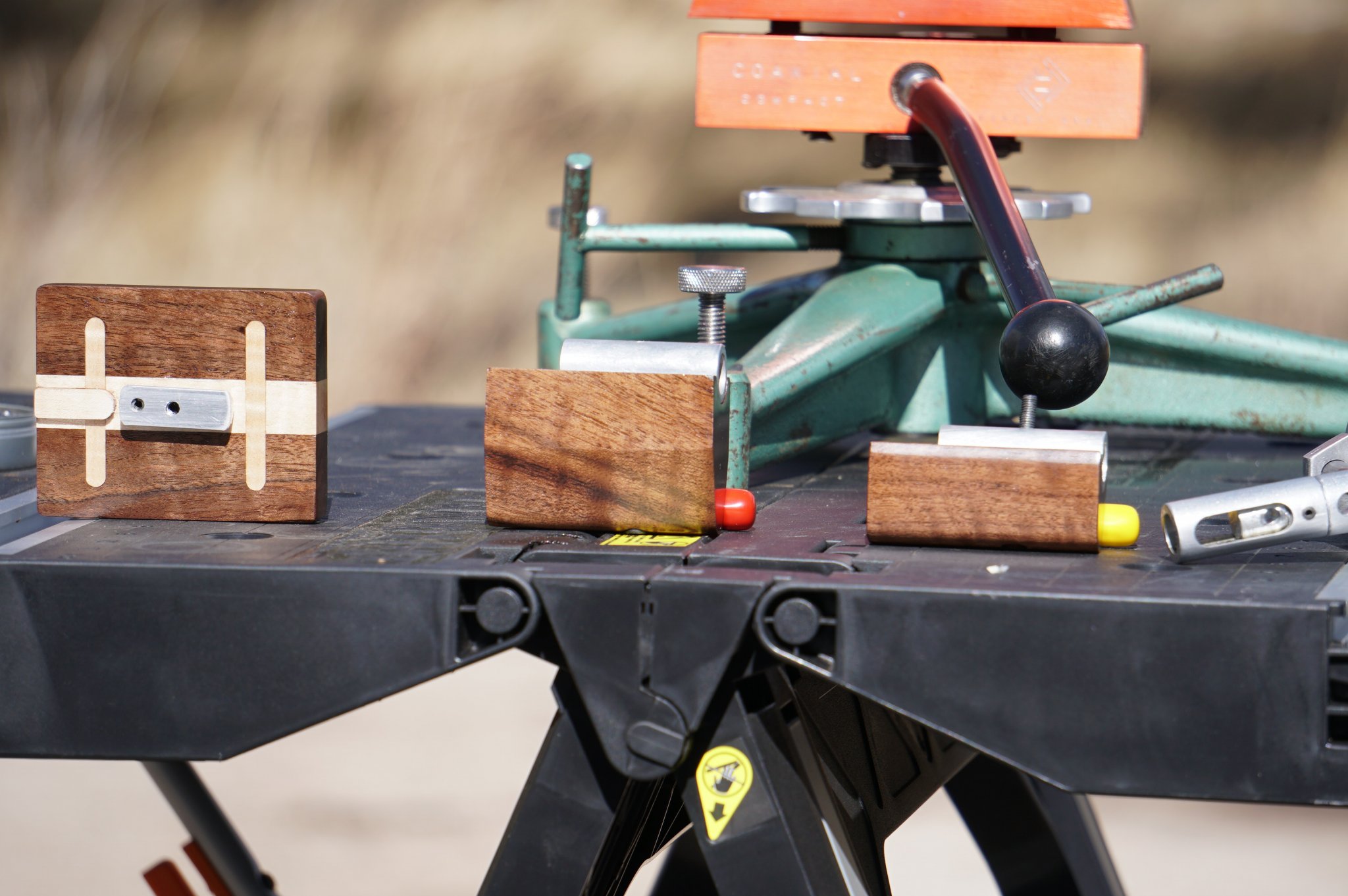 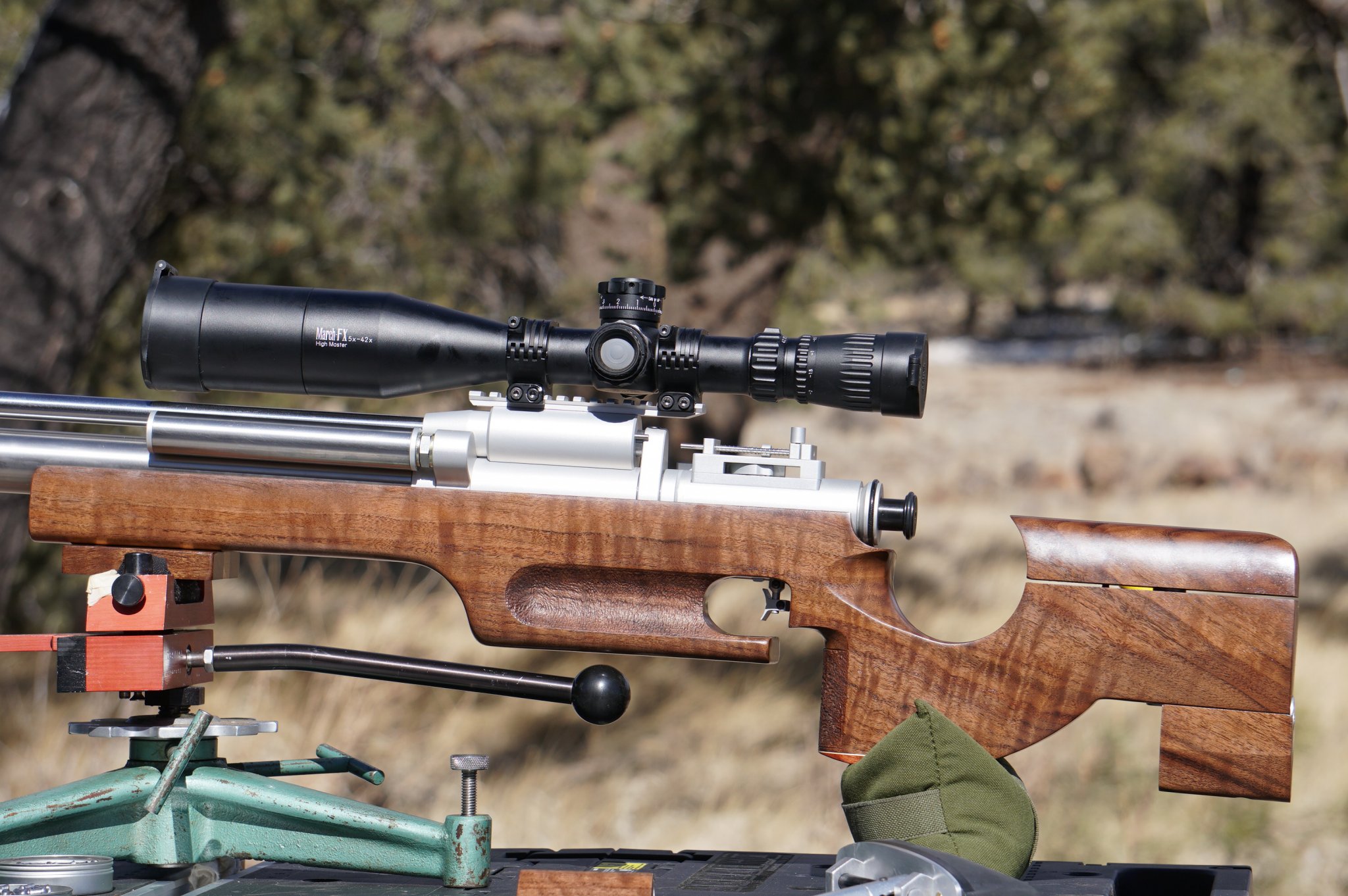 Pics of steel while I was getting the dope ironed out for a American Extreme Field Target event coming this weekend. There's less than half inch vertical on the 90Y man silhouette for 4 shots, and EDIT - about .7" vertical aiming at the bolt on the big round steel at 100Y, that's 10 shots.
The smaller steel and the cardboard was shot off a not so good bench and a not so good rest. KYL rack was 50Y, triangle 65Y, square 70Y, little circle 75Y, rectangle 90Y, and cardboard 100Y, at 100Y I aimed at the hole just left of the group. Additional splats on the KYL rack were from some friends trying my rifle out. I did miss the 2nd to last one because the wind had switched, I corrected and hit it, then hit the 1/4" six times in a row. 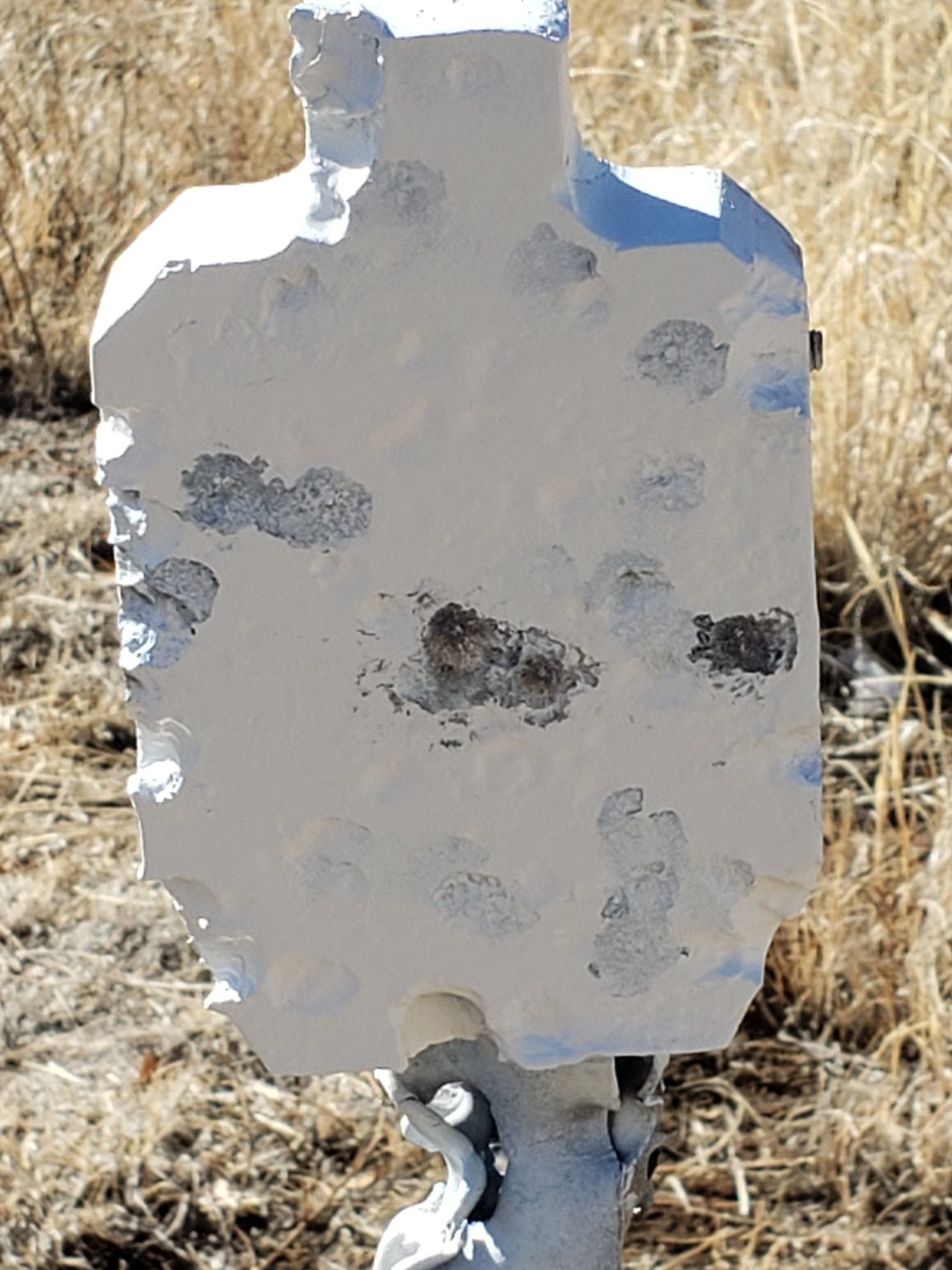 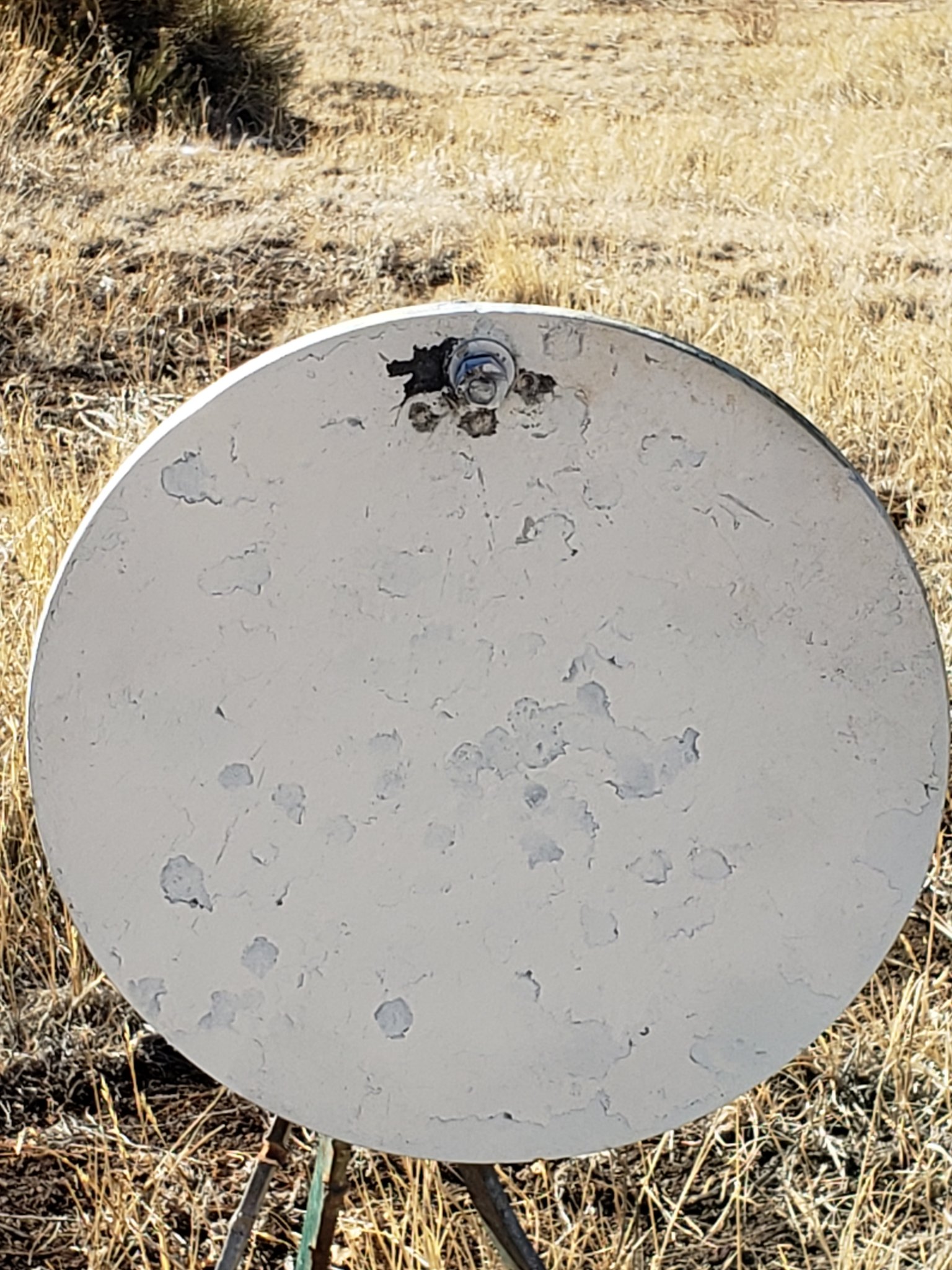 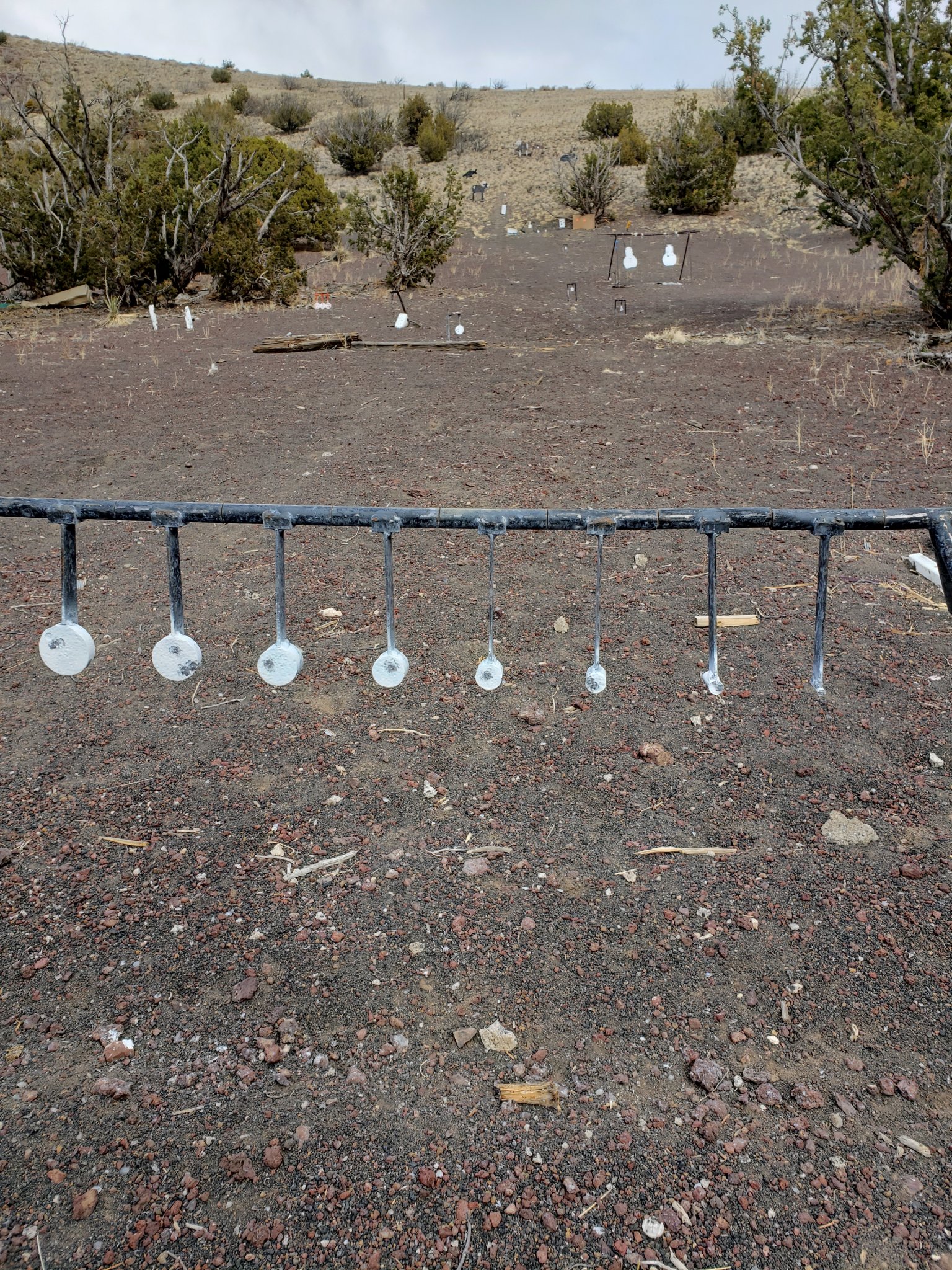 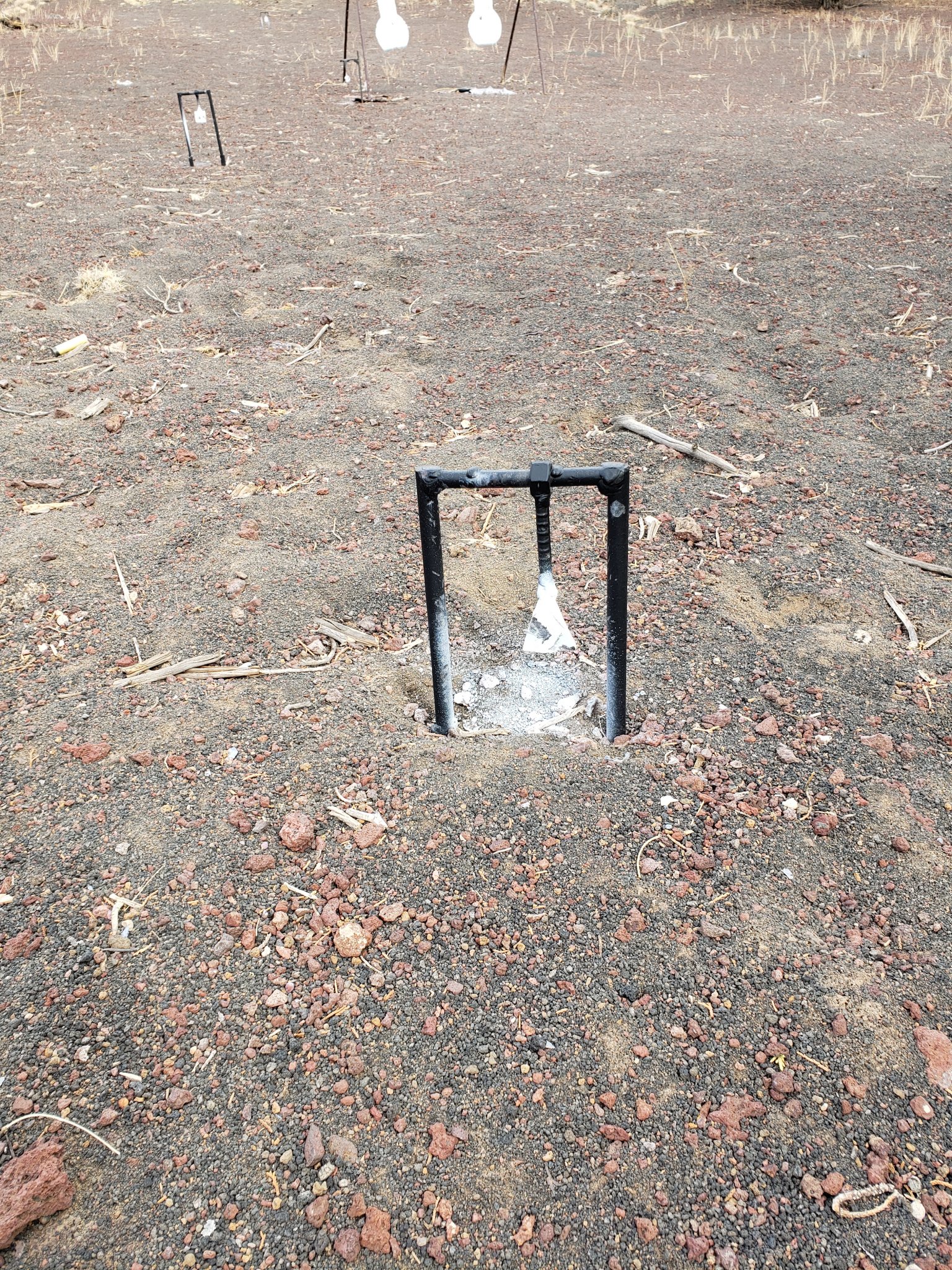 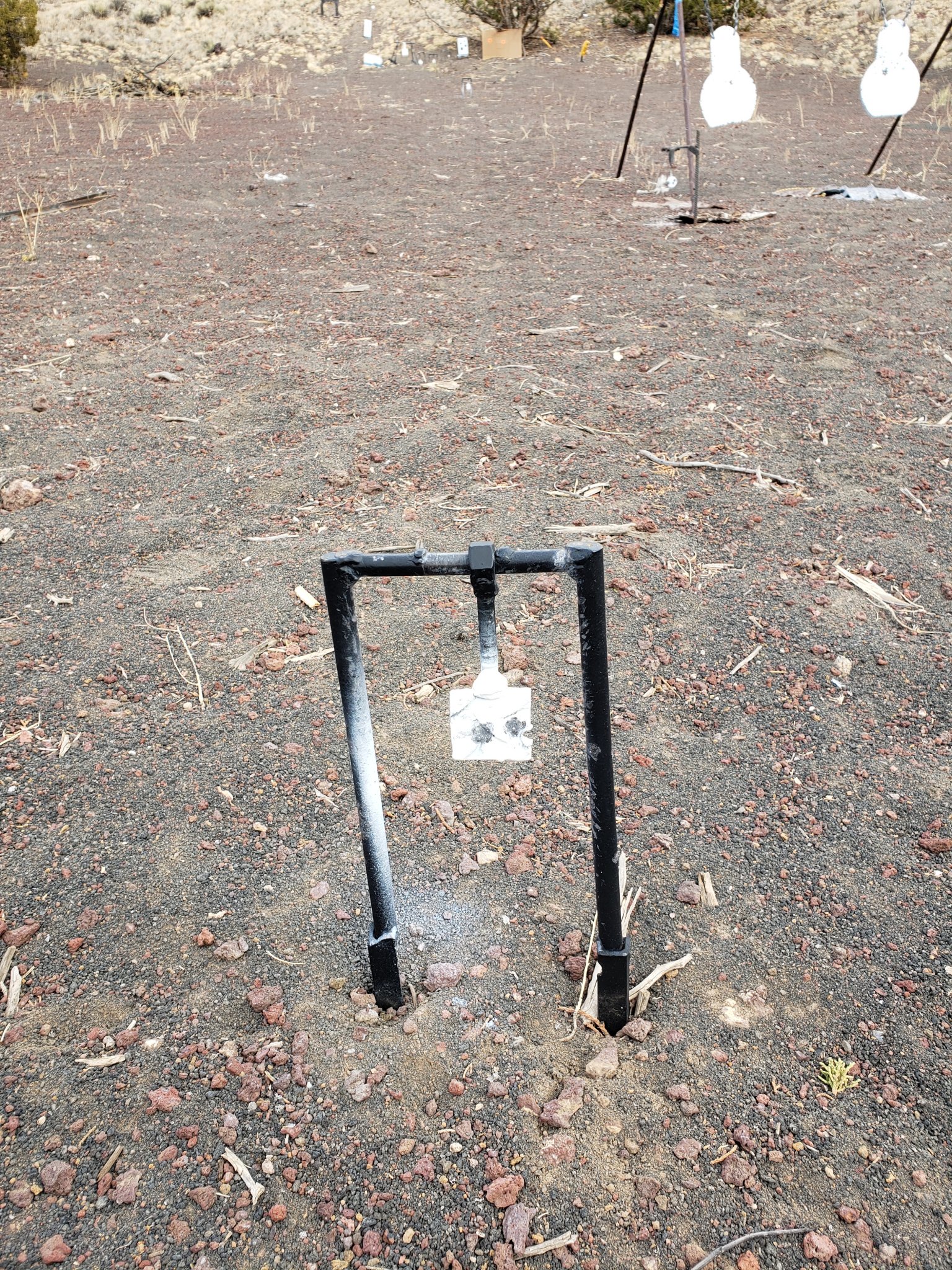 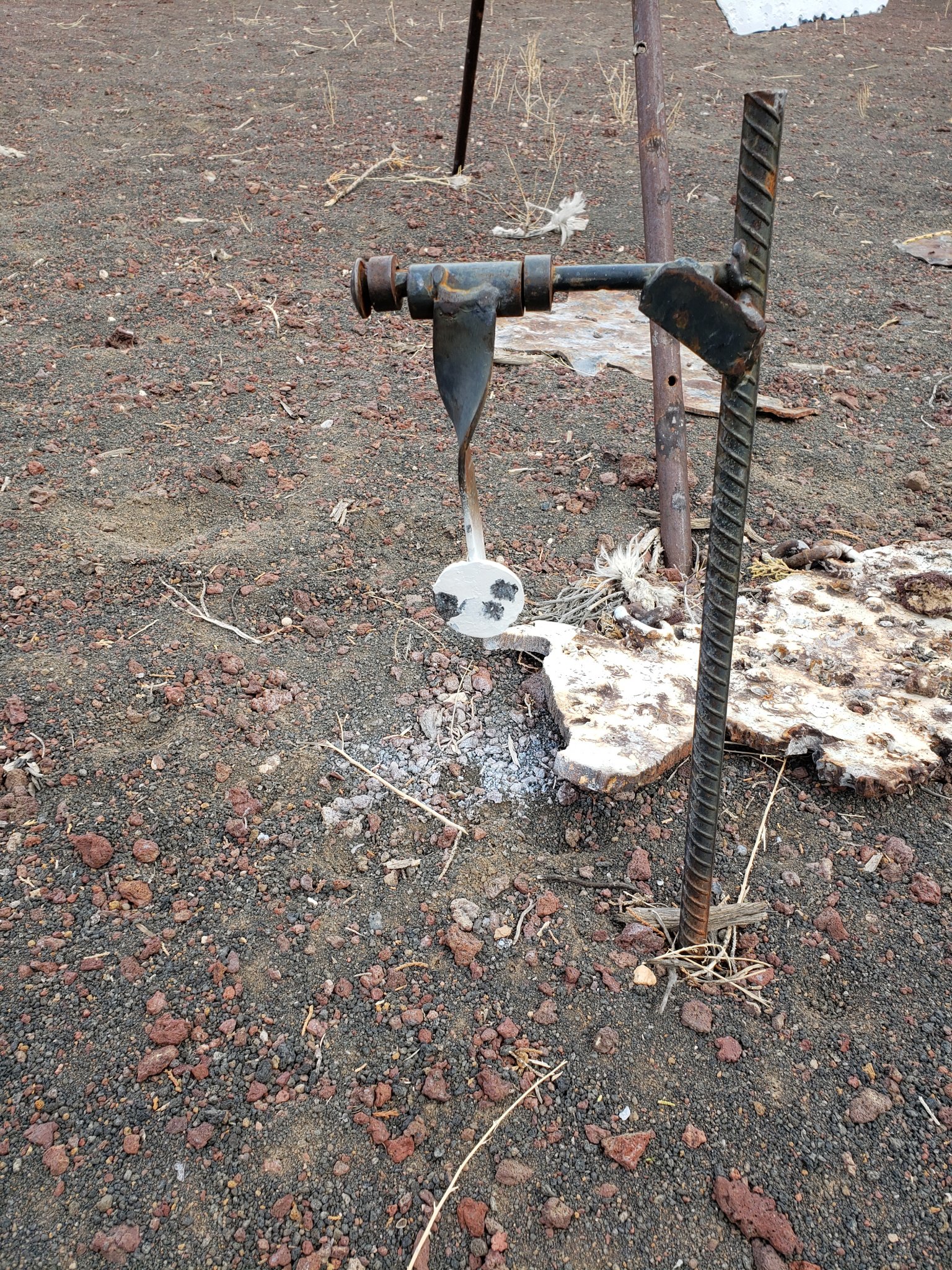 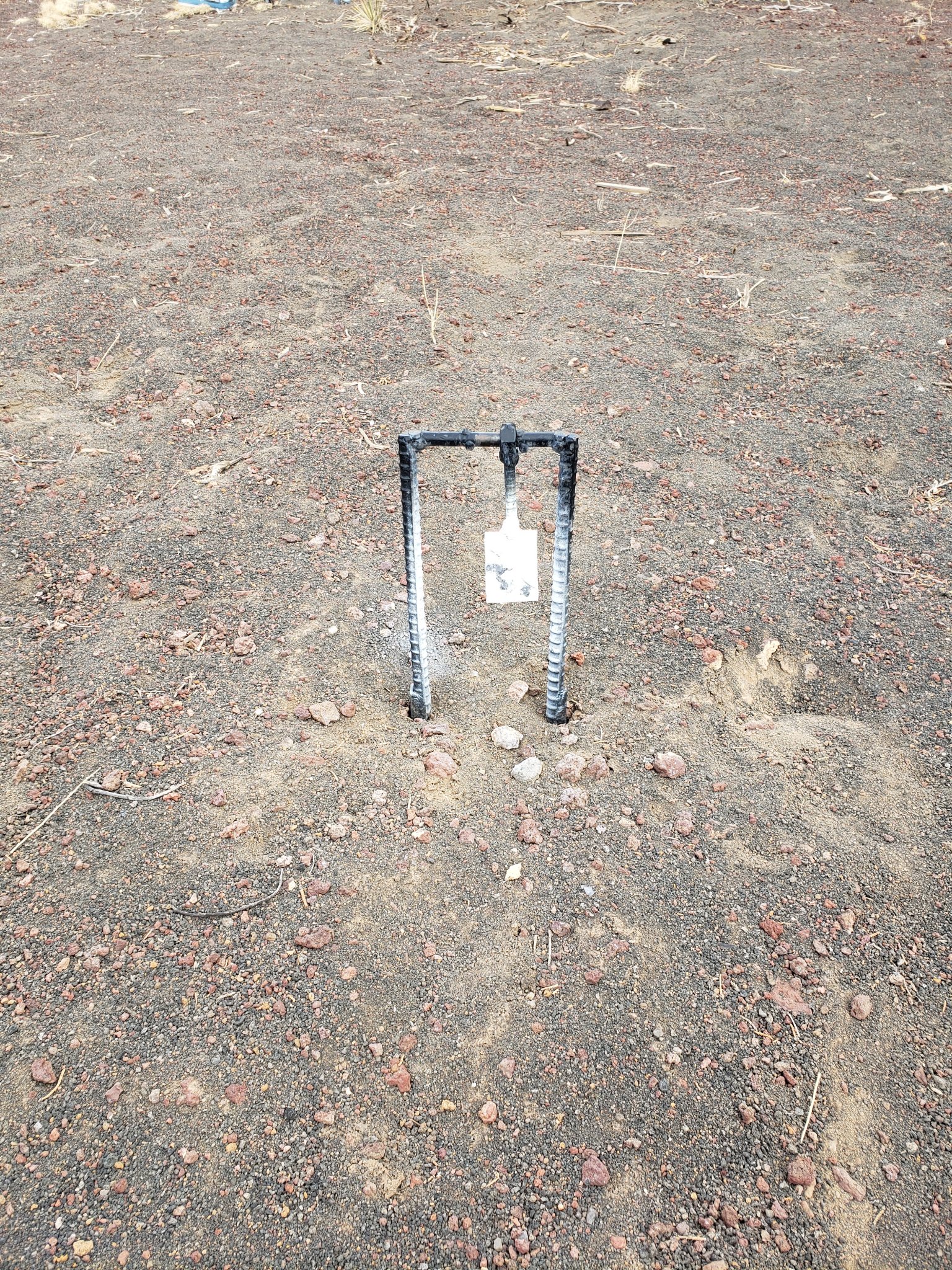 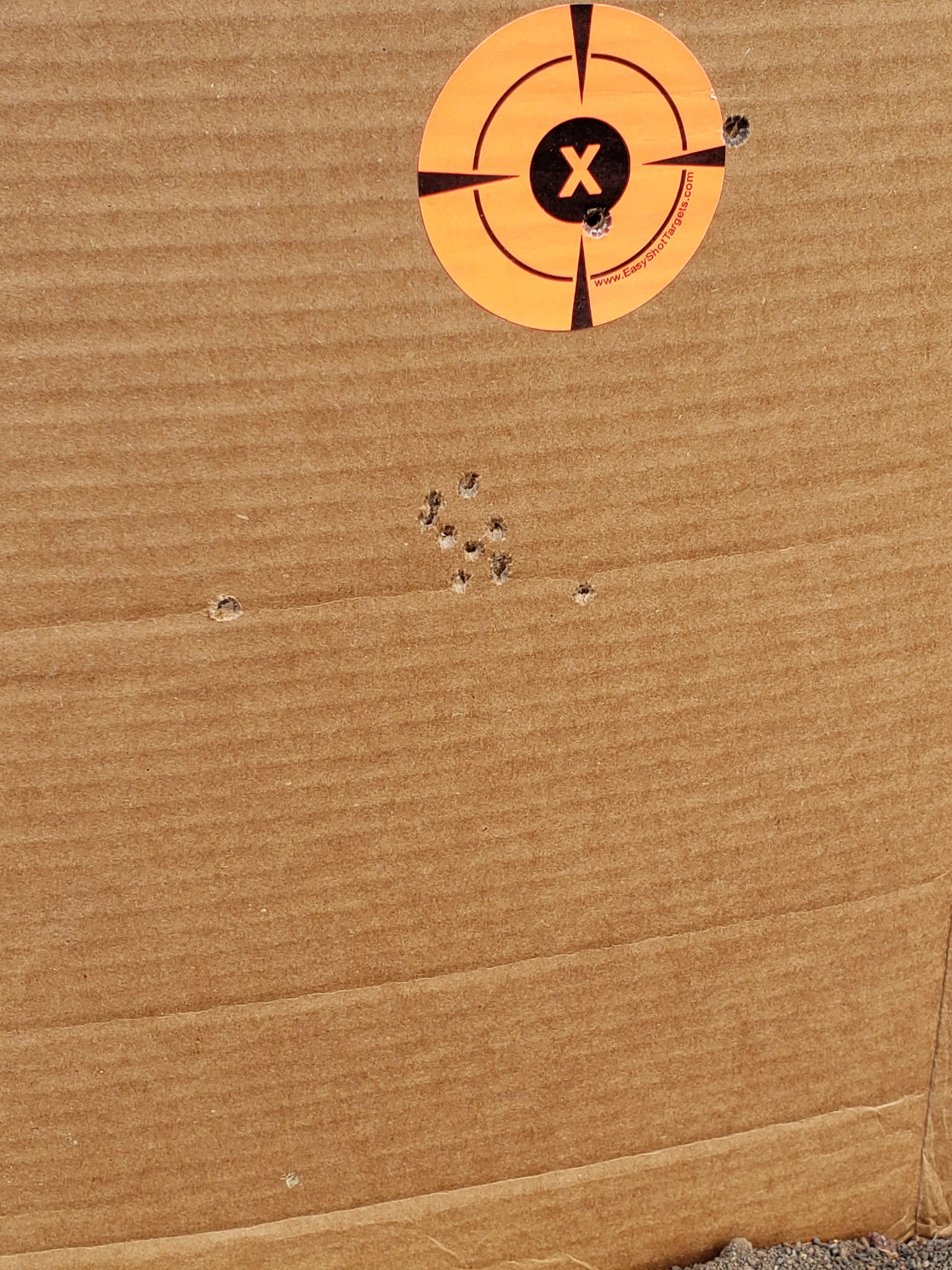 Nice gun. Thanks for sharing. I thought my next PCP would be a Delta Wolf, but now I'm hesitating.
How does it group at 50Y?
S

Next week I'll try it at 50Y on some National BR 50 cards if the wind is down, but I'm sure it's capable of 250's because Mike N did so with my barreled action in his BR chassis system. He's a national 25M BR champion so..... but it'll be a learning experience for me since I'm just starting out in this discipline.

He also shot 50 shots at 50Y using my barreled action without compensating for vertical or wind and the group was an inch wide and a .3" tall. He said he can't tell any difference between my barrel and his previous best barrel.
This is that group at 50/50Y 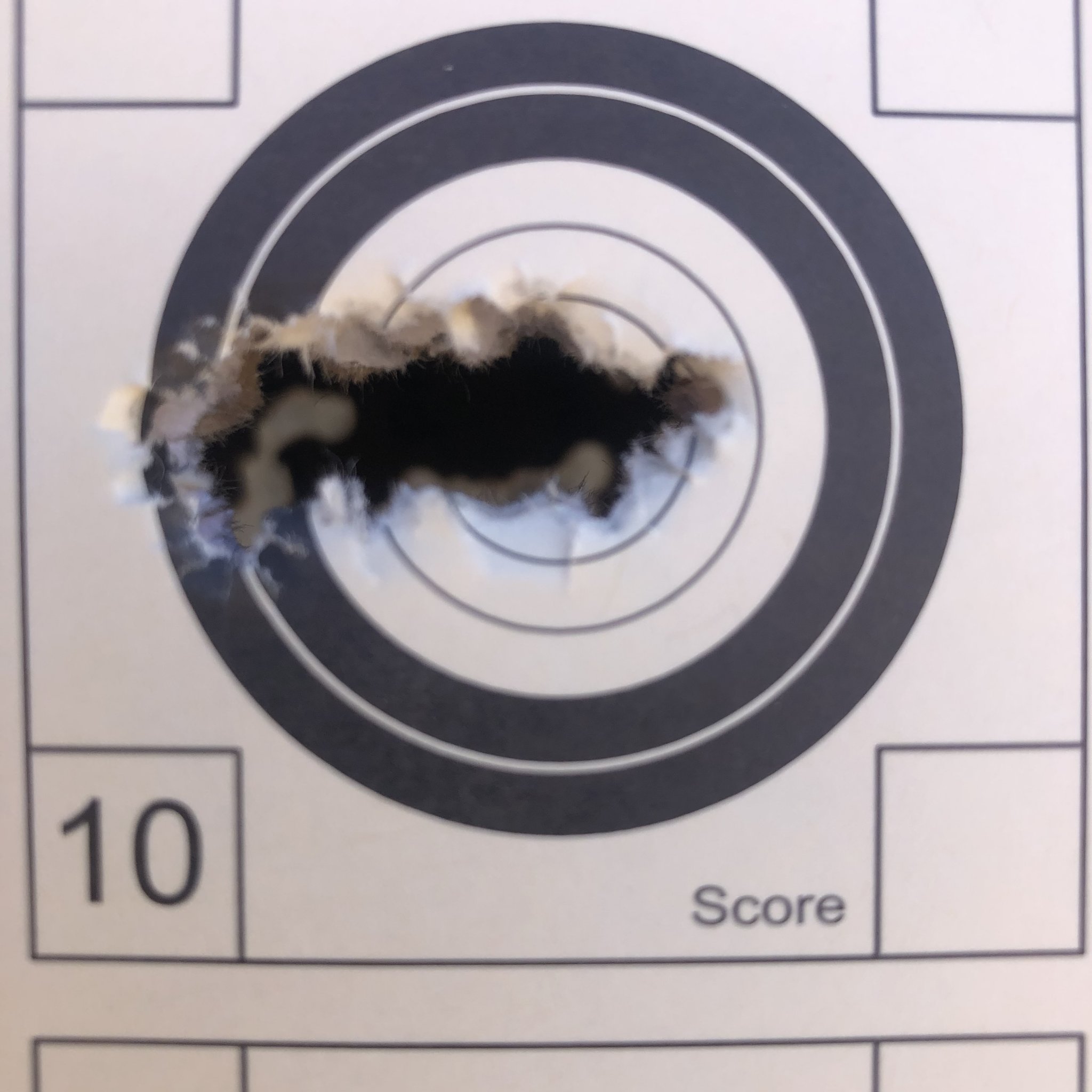 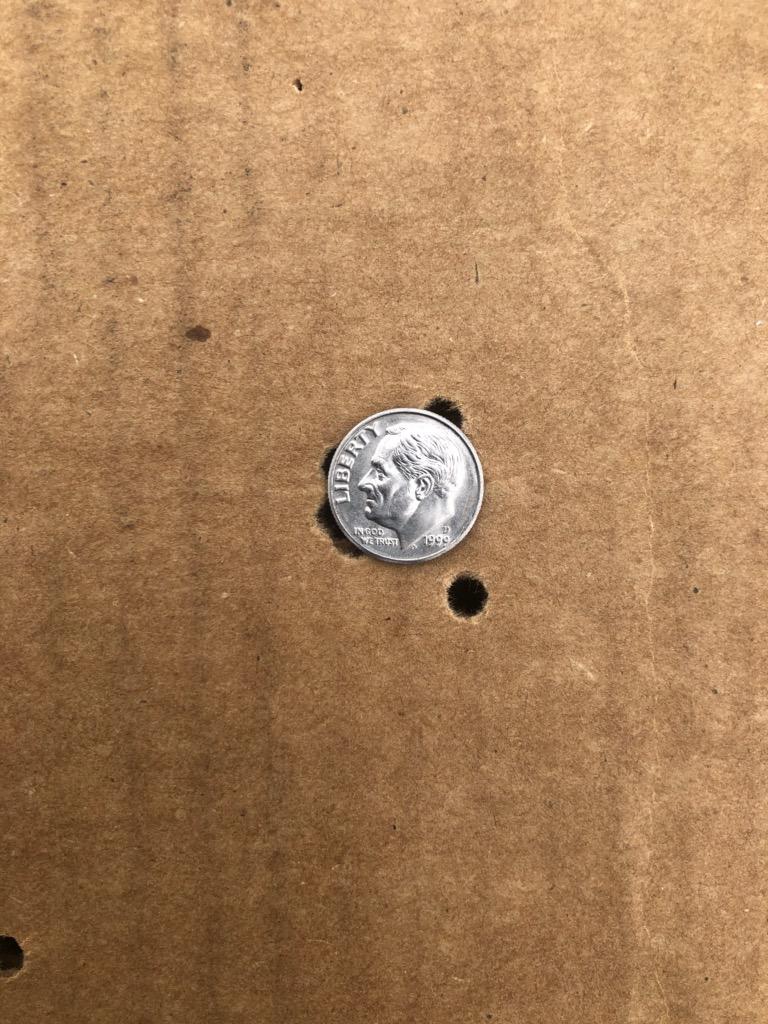 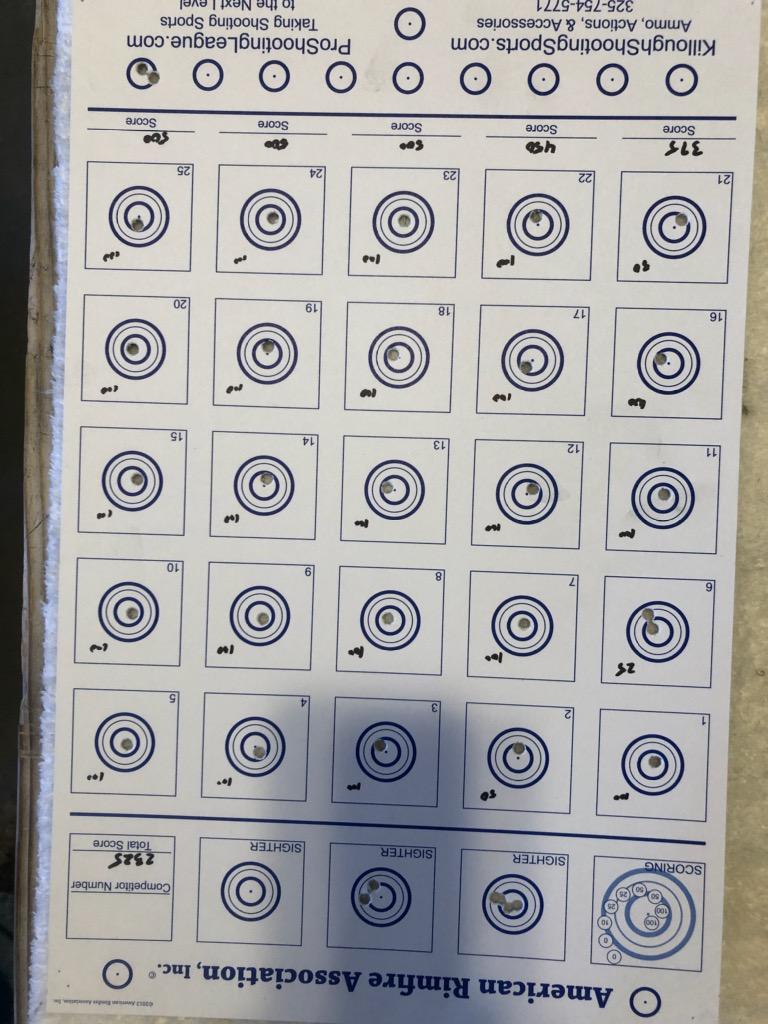 SURELY is likely the most precise air rifle on the earth right now, both with pellets, and slugs, which require a different barrel??!! That's incredibly exciting to me!
With the slug barrel he sent me pics of 3 groups all touching at 100Y with his swaged 42gr slugs/bullets! I'll be getting that barrel in a month or two.
Reactions: ZG47A
S

Rifle shot off of shooting sticks and I was sitting on a 3 gallon bucket. No wind flags.

The top photo is 90Y two days ago. Pellets blow a lot in the wind, the wind was coming from 8-9 oclock and 2-8 mph! Vertical not too bad for a pellet gun.

2nd photo from yesterday. The dead center hit was at 120Y holding 1 mil of windage. 5 mils of elevation dialed. We love it when that happens, right??! No way I was going to ruin my "1 shot one kill" group, lol! Wind had died down a hair from 10 mph average when I took the shot.

The 15" round steel was at 130Y, uh yeah, that's how much a .053 BC pellet blows in the wind! Just a guess but the same target would have to be 600Y away to experience the equivalent wind drift using my 6mmBR in the same winds. 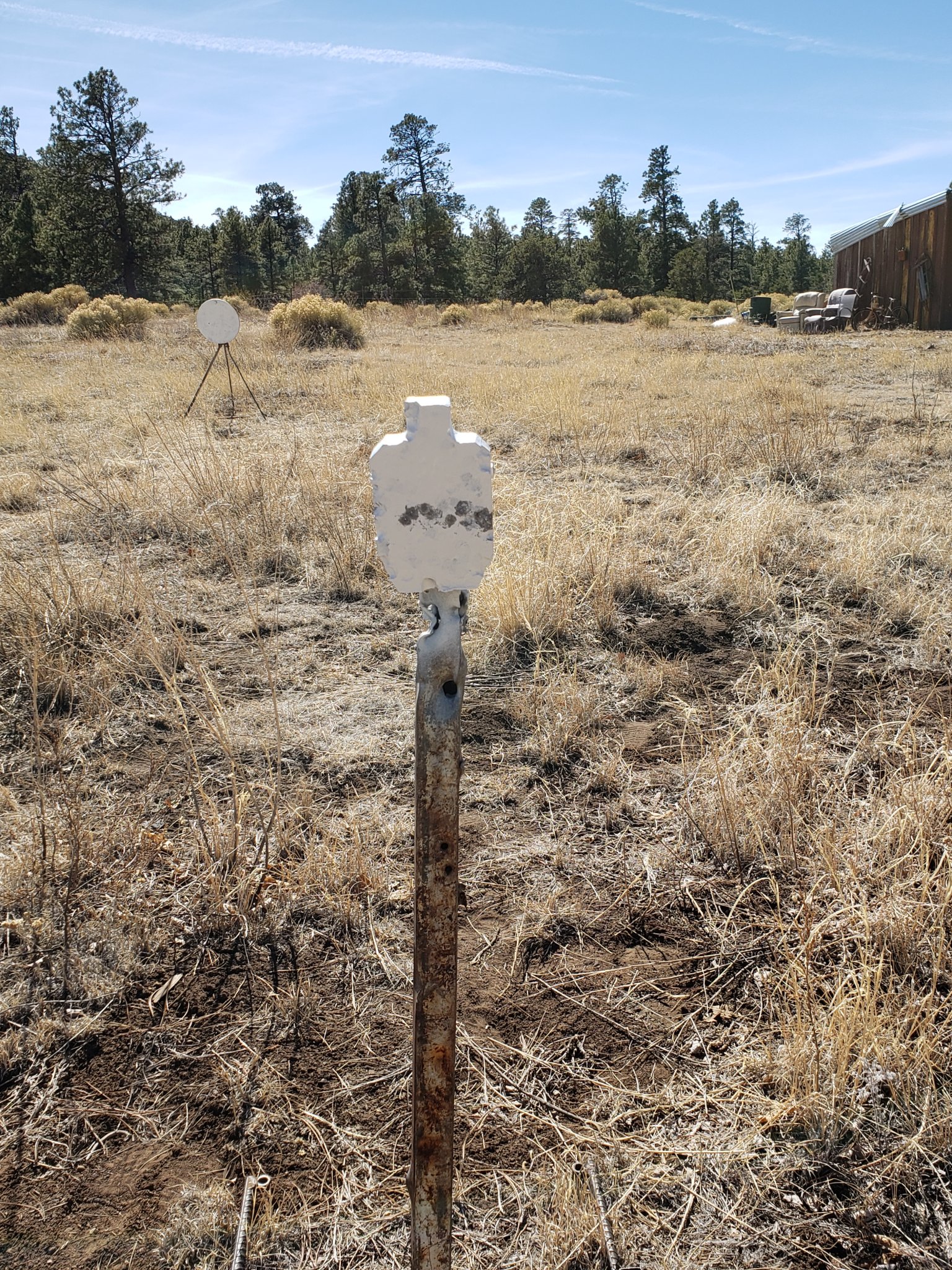 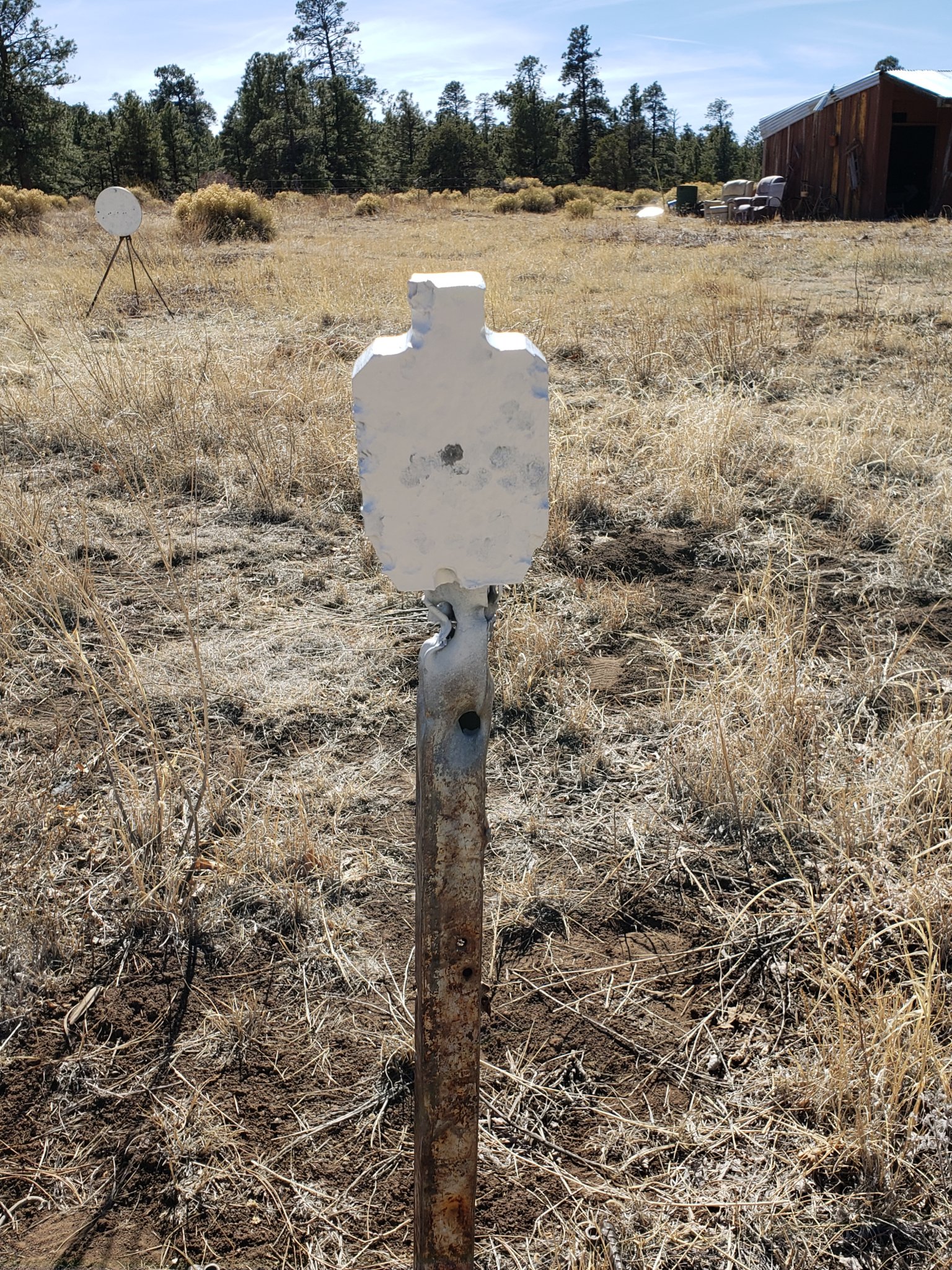 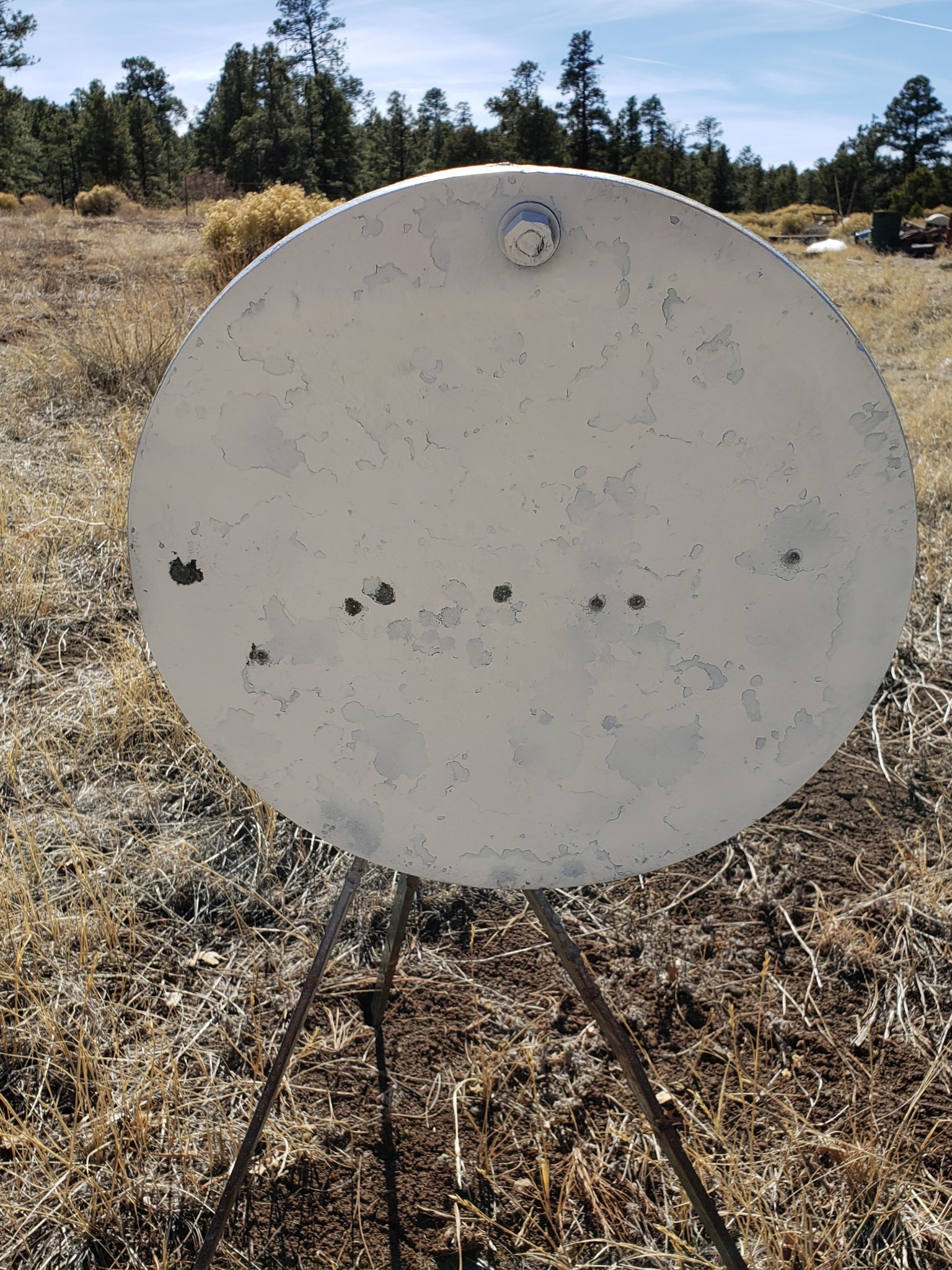 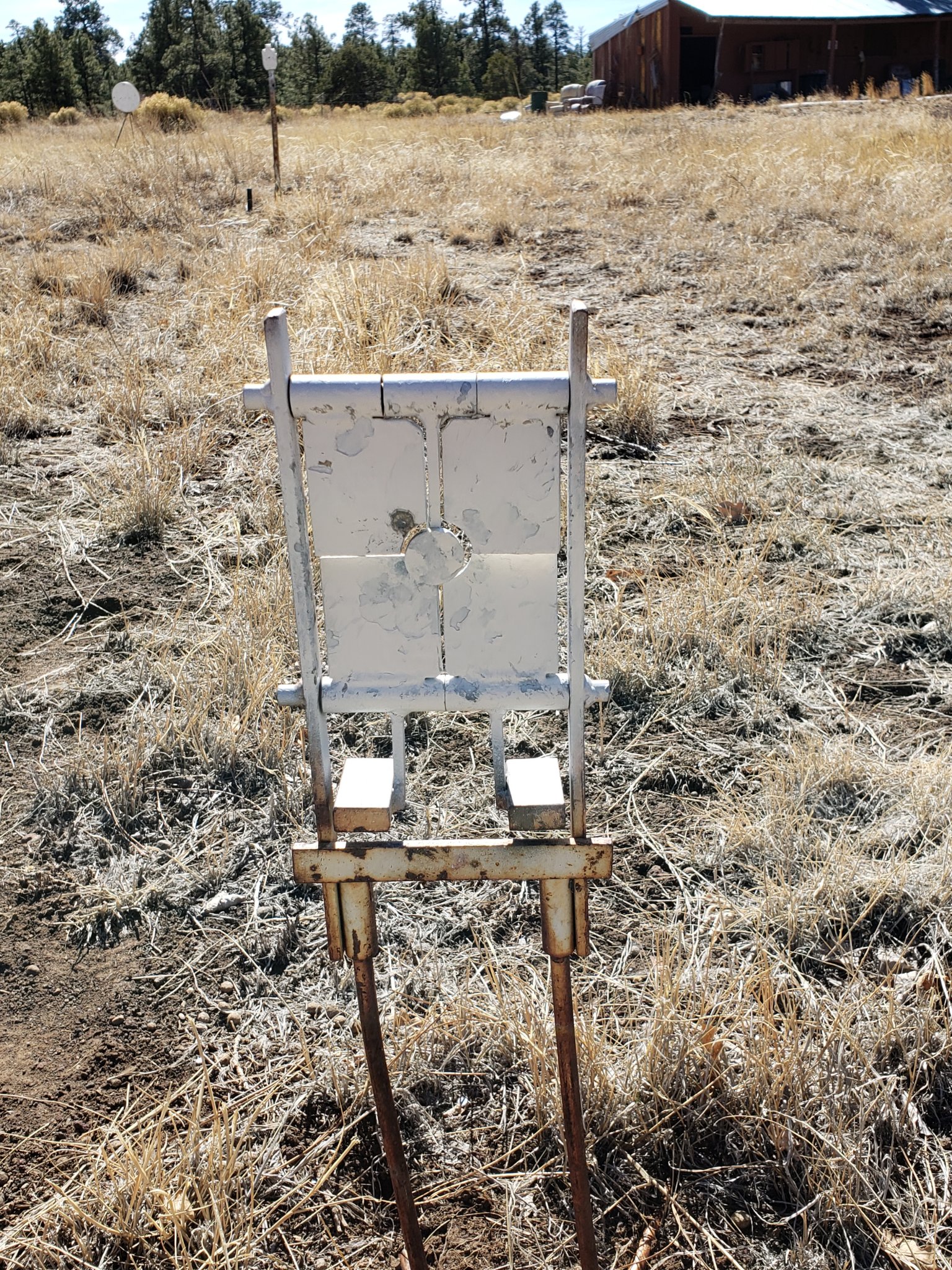 Is that a muzzle break? I don't recall ever seen one of those on an air gun. I suppose it must be pretty loud. Any reason you didn't go with a conventional silencer?
Z

Nice rifle and shooting results. I like the muzzle brake. Are you a Lahti fan?
S

Kevin1 said:
Is that a muzzle break? I don't recall ever seen one of those on an air gun. I suppose it must be pretty loud. Any reason you didn't go with a conventional silencer?
Click to expand...

It is a brake.
Mike N made the brake along with the rifle. He insists that SURELY shoots best with it on, to the disdain of my other airgun bud's, lol, because it is a little loud. It really does reduce the recoil impulse though and keeps the rifle from sliding back in the bags when it's set up for BR using those attachments.
S

ZG47A said:
Nice rifle and shooting results. I like the muzzle brake. Are you a Lahti fan?
Click to expand...

Truth be told I do have brakes on half of my rifles, even on my USFT.
Reactions: ZG47A

That is a beautiful stock !
Can’t wait to see how it performs with the slug barrel.
Reactions: steve123
S

Just thought I'd bump this thread up since I recently got a slug barrel for SURLEY and started swaging 99.9% lead. A slug in the airgun world means a cast or swaged bullet.

What I wrote about SURELY is here on AGN.

This post is more of a initial start and short telling of my first experience at long range with slugs in SURELY, as well as a little content about swaging. For now I don't have many photos to show of "official" targets per say, or of the steel I shot at. Part of the reason is the longer range...

That’s a completely badass air rifle and puts my Air Force Talon to utter shame. Don’t shoot air gun much because I just have a hand pump and filling is a pain. Thought about an air compressor for it but the reviews on just about all the low to moderately priced ones seem mixed. Thanks for sharing.
S

Doctorwho1138 said:
That’s a completely badass air rifle and puts my Air Force Talon to utter shame. Don’t shoot air gun much because I just have a hand pump and filling is a pain. Thought about an air compressor for it but the reviews on just about all the low to moderately priced ones seem mixed. Thanks for sharing.
Click to expand...

AFT's are decent, I like the one my friend has.

I agree that hand pumping a larger reservoir sucks. Might be ok for hunting when only a few shots are taken but otherwise its not worth the effort to me. That's when less powerful airguns come in handy for shorter range shooting or 22rf's for more convenience, power, and distance.

One has to have gone way down the rabbit hole to get to where I'm at with airguns. Its been super expensive but I have all the air I could ever use now because I bought a good compressor, enough lead to last nearly a lifetime, and airguns that are very satisfying. Its legal to shoot these on my property which is one reason I'm into them, I'm into airgun comps as well, but I've had a love for airguns since I was 8 years old.
Last edited: Jan 11, 2022
Reactions: Seymour Fish, Rimfireshooter99 and Doctorwho1138
S 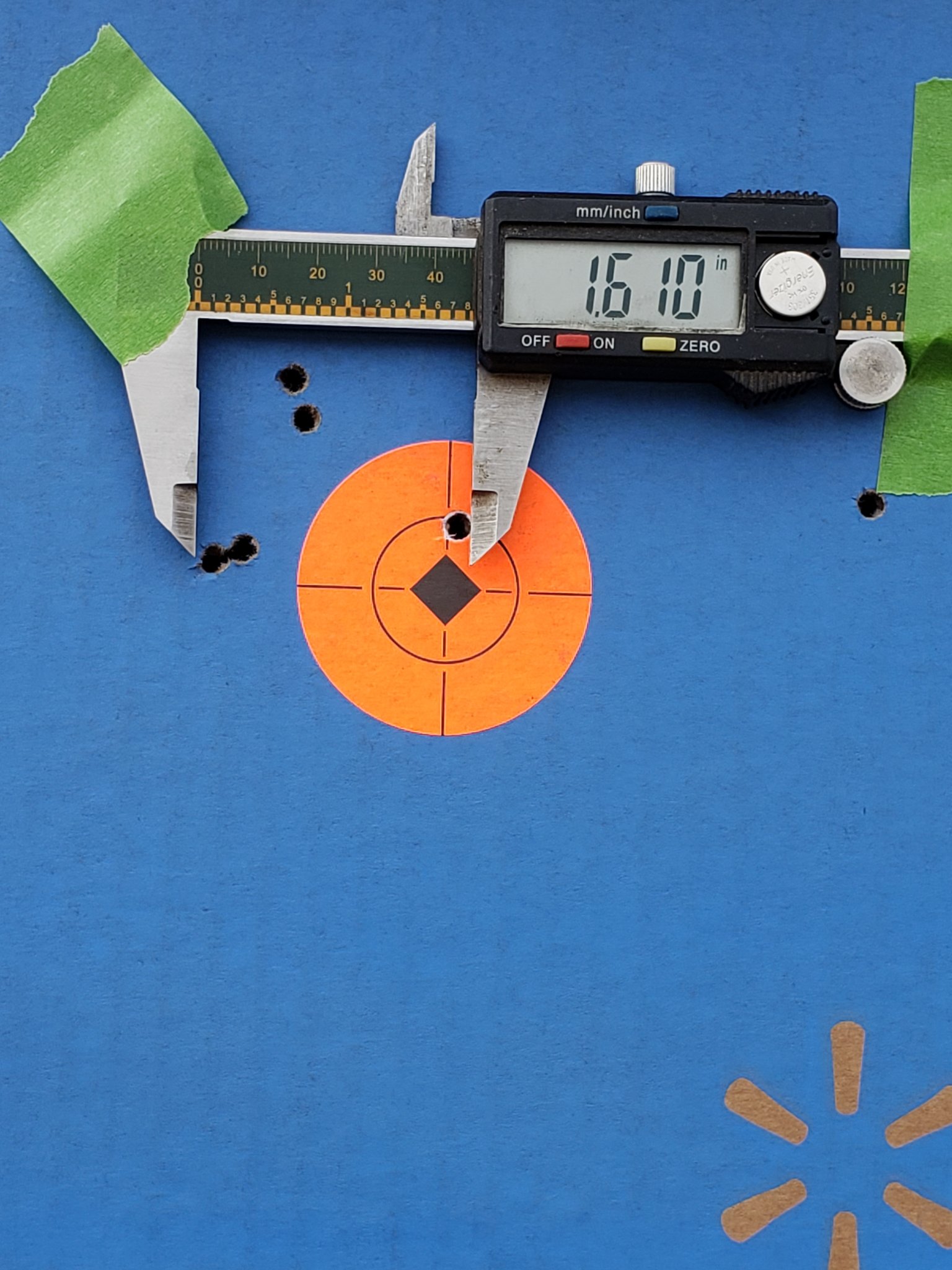 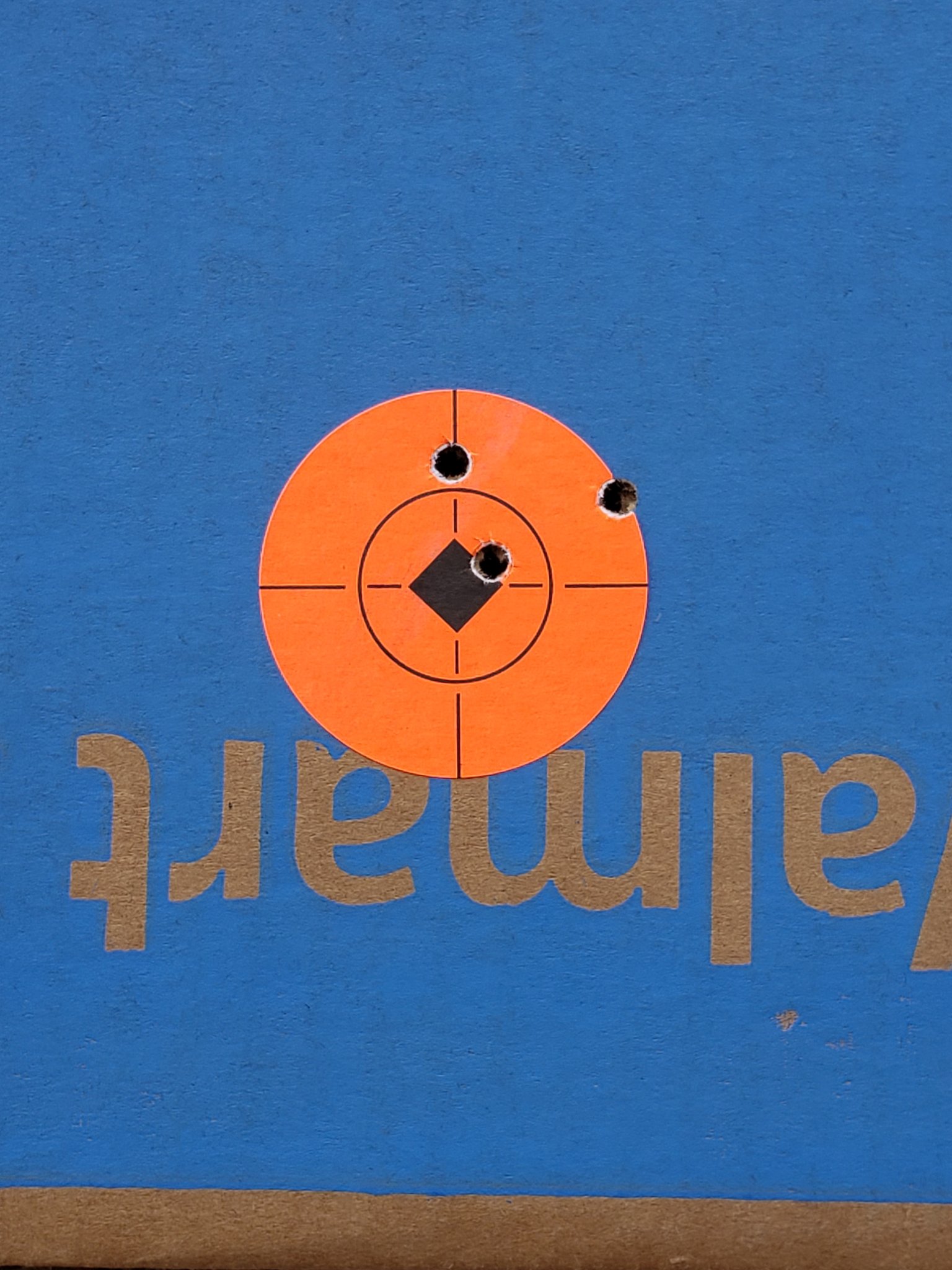 I shot this yesterday at 200Y using my slugs. Of course the last shot went to the right! Wind was kicking up rapidly so I quit because the other groups were not good.

A pcp rifle has made me a better shooter in every way.
Reactions: ZG47A
G

Reviving this thread. I’m a RFBR shooter but I have a Thomas on order, hopefully within the next month. I only shoot BR. Mine is .177. Just stumbled onto this thread. I’m moving to a new area and will be looking for a club.
S

gkgeiger said:
Reviving this thread. I’m a RFBR shooter but I have a Thomas on order, hopefully within the next month. I only shoot BR. Mine is .177. Just stumbled onto this thread. I’m moving to a new area and will be looking for a club.
Click to expand...

Good for you! Great guns for sure.

I ended up buying a 19 fpe Thomas Field Target rifle earlier this year. I tied for 1st place in its first match and got the high score in the last 2nd match I shot it in. Man am I impressed with it!

I named it Purple Reign. 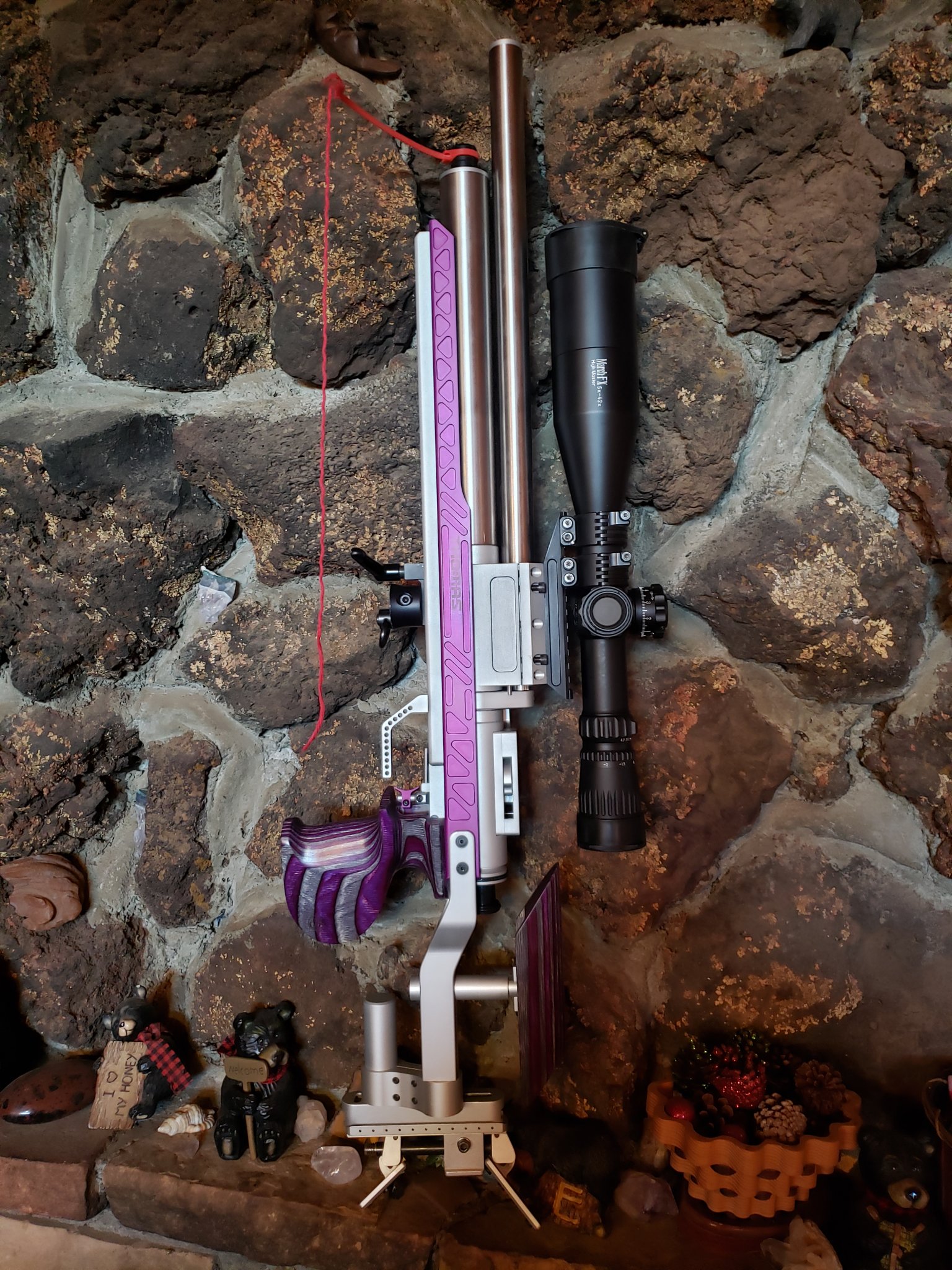 Reactions: Frankr, Tinker054559, ZG47A and 1 other person
Show hidden low quality content
You must log in or register to reply here.