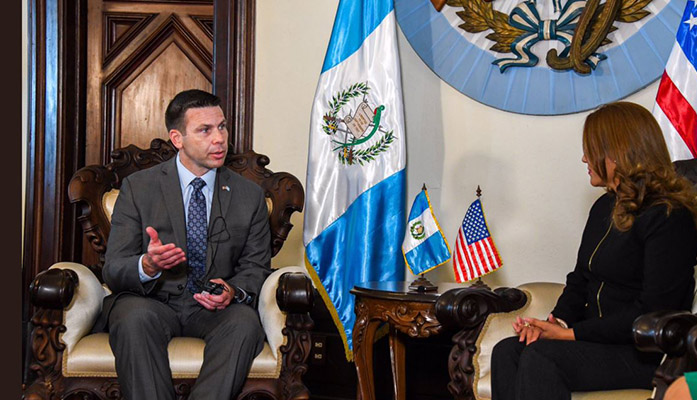 Border Patrol agents across the country are quietly sharing their growing concern that President Donald Trump might move forward with the permanent appointment of Department of Homeland Security Acting Secretary Kevin McAleenan. McAleenan, the creator of the government’s “catch and release... 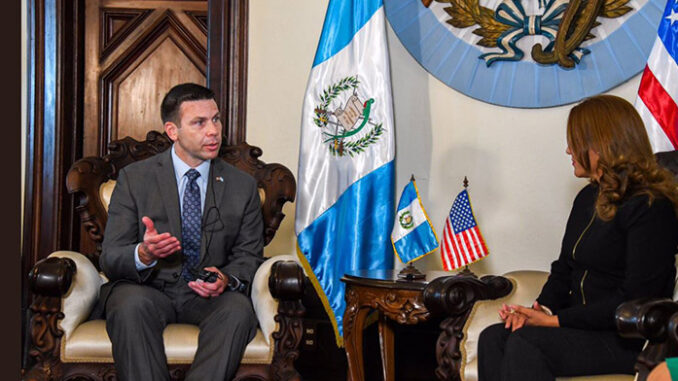 Acting Secretary Kevin K. McAleenan takes a tour of the Repatriation and Reception Center in Guatemala City with the First Lady of Guatemala, Patricia Marroquín. [Photo courtesy DHS]
Border Patrol agents across the country are quietly sharing their growing concern that President Donald Trump might move forward with the permanent appointment of Department of Homeland Security Acting Secretary Kevin McAleenan.

McAleenan, the creator of the government’s “catch and release policy,” was made Acting Secretary upon the departure of Kirstjen M. Nielsen in April.
Agents had hoped only briefly at that time, that Nielsen’s departure meant Trump was keeping his promise to clean out the Obama resistors within the Department. The hope was momentary when they learned of McAleenan’s appointment. Still, McAleenan was only named Acting Secretary so all hope was not lost.
Over time, what little hope remains is being replaced by a sinking morale. Agents, who are now part of the “largest humanitarian organization in Law Enforcement” as a result of the unabated crisis on the southern border, are not receiving positive signals from the Trump Administration.


In fact, one agent who asked not to be identified said it is difficult to keep personnel on the “Trump train.” According to the agent, while his team recognizes that the Democrats are not offering any assistance or solid leadership choices, “Trump is making it tough to believe his rhetoric these days.”

Watch Large Group From Ebola Ravaged Africa Wade Across Rio Grande Into US! | News Talk 550 KFYI
A group of illegals from Angola, Cameroon and Congo waded across the Rio Grande River and into the United States, video from Customs and Border...
kfyi.iheart.com
Click to expand...


In April, “faced with falling morale, increasing retirements and a shortage of new agents,” according to FOX News, “U.S. Customs and Border Protection announced a 5 percent bonus for agents willing to stay with the agency another year.” Agents were heartened that the $5,000 retention bonus would be paid out in four quarterly increments, but it isn’t enough.
More than money, agents need to know that the country’s leadership understands just who McAleenan is and why he is the wrong choice.
Who is McAleenan?
Trump promised a hardline approach to stopping the flow of migrants into the country. For the most part, agents with boots on the ground believe that only a hardline approach will stem the overwhelming tide. Their problem with McAleenan? He has never had his own boots on the ground.
According to AllGov.com:

Their all pussies, and criminals!
Show hidden low quality content
You must log in or register to reply here.