Ruag is touting this design as some new BC gain in bullet design over a traditional hollow tip!? Looks like a traditional FMJ and ball used to stop the lead plug from filling the tip.

Anyone not following the scene .375 Swiss P is meant as a service cartridge to be shoot from actions with .338LM bolt face and mags , with .350g bullet it offers higher BC bullets and more energy on target at extended ranges.

That BC is actually on the low side being it is a 350gr projectile though.

I didn't take it as if they were attempting to push this as a BC upgrade but more of an energy upgrade without having to upgrade weapon systems.

I will have to pull the CIP specs but it appears to be essentially a LM necked up to 375.

Edited To Add:
It appears the patent pending "Ball" is their way of reducing BC variations due to the lead core being uneven, I not sure.
But in theory the ball could keep the lead core from creeping up further on 1 side compared to the other since the ball can only go so high towards the tip it essentially "seals" the lead core into being more evenly situated.

I will check and see if can find the patent application to find exactly what they are claiming on their side.

It has a larger diameter rebated case , my take on it is that it .375 will offer more in terms of AP bullet design , in other aspects OAL is limiting to use of longer bullets

*they claim defeating SK4 (german level IV) at 600m , in comparison the Chinese Level IV plate is stopping .338 250gr AP at cca 200m if my recollection is correct


Notice that CIP approved date is 16.05.2018 so this was slowly cooking for quite some time.

Now, the thousand dollar question....Do you have a reamer already ordered by chance??

Not yet , waiting for some more first-hand info on the round as they are making some highflying claims but you can see the numbers are out of a 30in barrel and they are comparing mostly to 250grain .338LM , but yes have an action in works for higher pressures and bolt trust than current chamberings, so it would be a shame not to make it with this chambering . Effective against body armor at 600+m is what got me interested.
Last edited: Mar 25, 2021

One way to go about .
But Ruag offering line of ammo is just right for professional customers ,some of mine already use RUAG for number of calibers .

I'm assuming that depending on how the chamber is reamed, you could use the factory ammo which is a bit short and magazine feed it, or if you didn't mind single loading, you could run a longer VLD monolithic projectile?

I wonder what the capacity difference between it & the 37XC is. Able to mag feed is nice but projectile seems seated really deep.
Reactions: LastShot300

I honestly have not even compared the cartridge drawings of XC and the 375 Swiss P because in reality the benefits of RUAGs 375 Swiss P go well beyond any case capacity benefits.

1. I would be willing to bet that the number of rounds fired during just the T&E phase of the 375 Swiss P is more (aka more data) than all XC rounds ever loaded.

2. The issue that pretty much no gov/mil/lea agency (Talking about adopting and utilization, not single unit/entity "testing") will be dealing with an XC of any size (without lots more "things" needing to be done with it) lends the 375 Swiss P to excel in that market space.

3. The testing house of RUAG in Thun Switzerland is equipped with indoor and outdoor electronic target systems that keep track of accuracy, MV, deviations, etc etc that can not only be shown for the actual string of fire(s) for abc group number but can also overlay ALL of them onto a single screen for real data is another key benefit of the 375 Swiss P.....Its' data can be back up scientifically via real testing equipment.

Hoplite Arms will be getting sample 375 Swiss P ammo the day after RUAG USA gets their hands on it.
We are also in discussions of submitting an import license for "experimental purposes" to get the armor piercing version when it becomes available.
We have reamers and gauges on order from PTG via RUAG and will be sending Manson the information tomorrow to get them going on a set of reamers and gauges too.

What’s the case capacity on that cartridge @THEIS ?

I have conference with RUAG later today.
Here is pretty much all the documents I have so far. 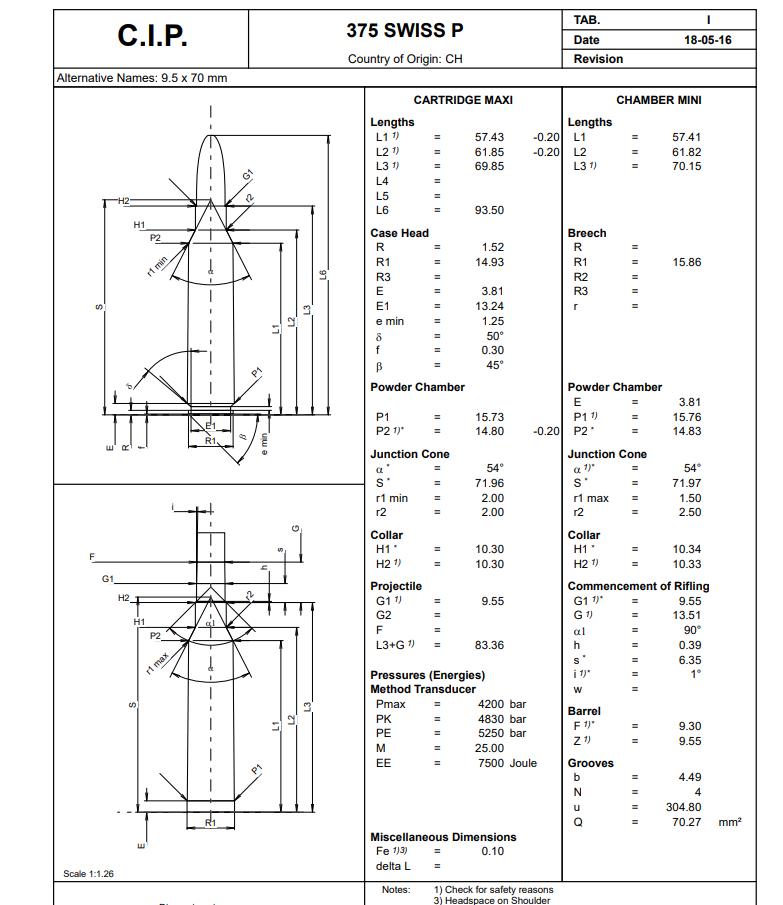 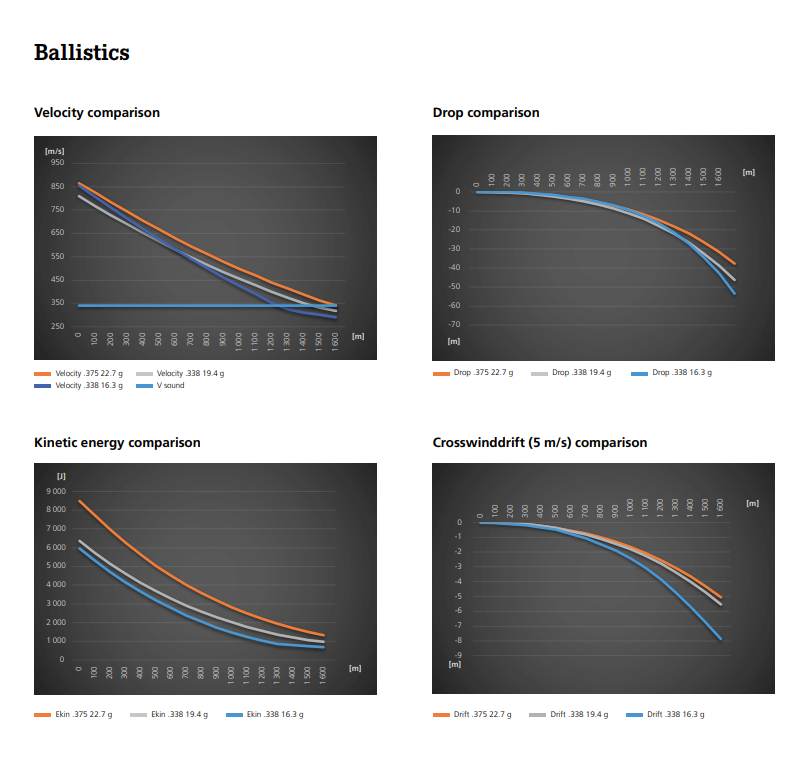 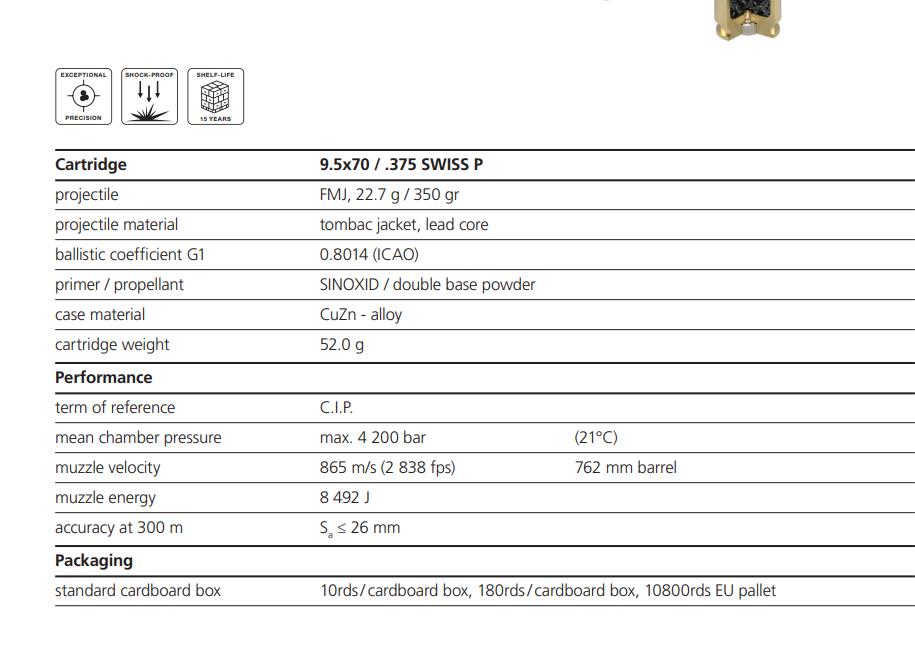 Just in case nobody has paid attention to it, lolol...

NOTICE the date in top right of the CIP file....Predates most of the "Big" cases with LM boltface

Just in case nobody has paid attention to it, lolol...

NOTICE the date in top right of the CIP file....Predates most of the "Big" cases with LM boltface

ETA: On a serious note, looks like a European military thing more than a US commercial market thing. Going to look over the chamber/ammo fit, but stuffing the bullet way back in the case is... not always the best idea.

I have conference with RUAG later today.
Here is pretty much all the documents I have so far.

And us USA guys...we are always the last to get the good European stuff!!

Not really, but in this case was just a question of when not if.

*Add Voere to the list they offer the caliber in their X3, X4 and X5

Kinda surprised PGM/F.N. is ahead of its Swiss clone B&T aka Euro Chinaman on this one.
Last edited: Mar 30, 2021

Yea especially since the 375 Swiss P is manufactured at the Thun facility which is only a few miles from B&T HQ.

I guess B&T .... is kinda like if Forgotten Weapons was a firearms manufacturing business, spending much of their time and effort looking for long-abandoned European guns to resurrect, and the sniper rifles department is just a side hustle running on a project they dredged up when Unique went bust.

So is there higher pressures or increased bolt thrust over a 338LM? As already covered, I’m assuming a design goal was the use of preexisting 338LM/300NM rifles.
Reactions: LastShot300

Ammo will be available supposedly sometime April, the AP version is expected to be available from the end of 2021.
Currently, PGM and Voere offer the new caliber in their rilfes. For the time being, the .375 Swiss P is intended only for military/LE users.
Last edited: Mar 30, 2021

I thinking the 285gr 338s on the Swiss P with staked primers, lol

I thinking the 285gr 338s on the Swiss P with staked primers, lol 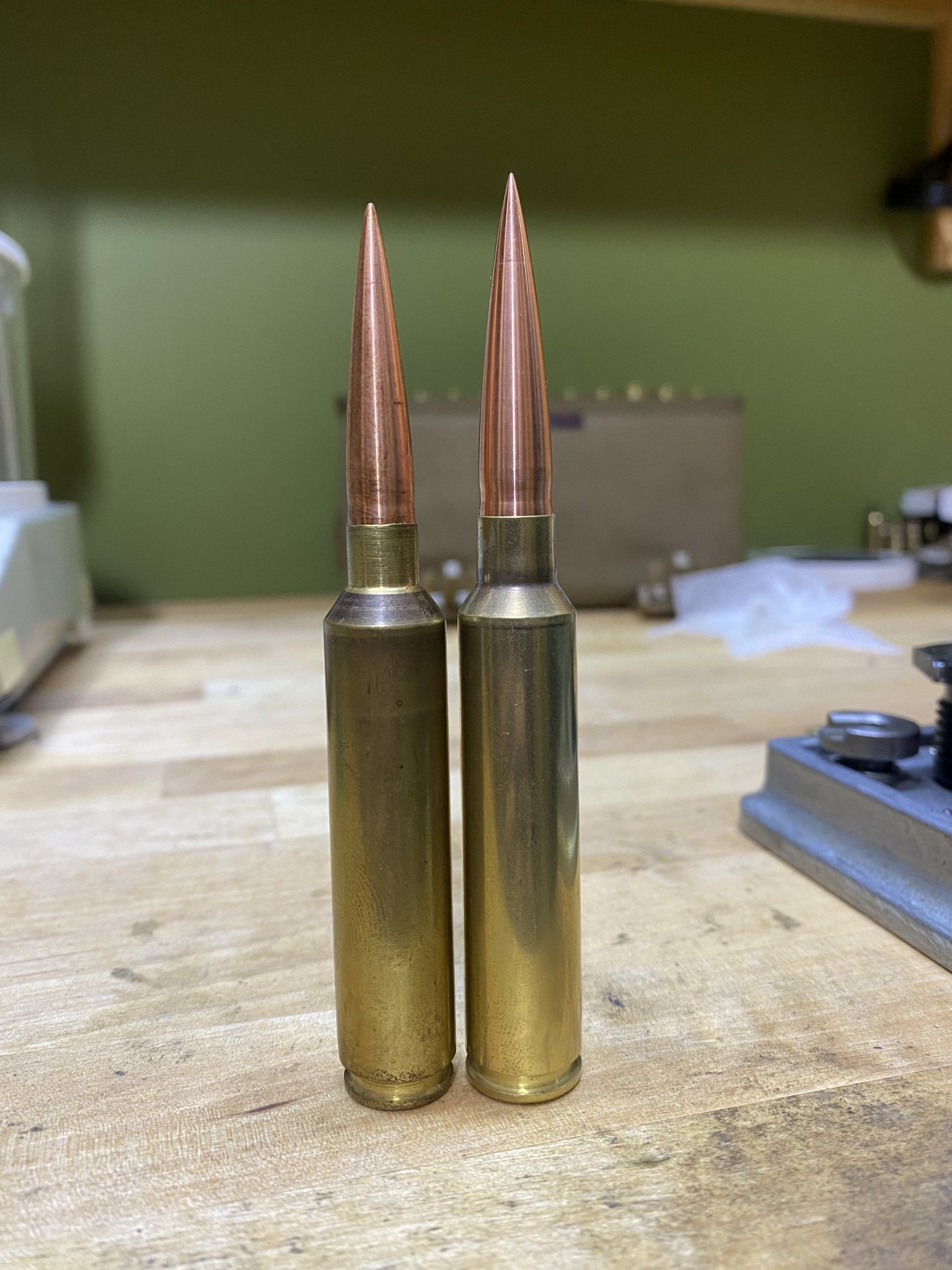 Yea especially since the 375 Swiss P is manufactured at the Thun facility which is only a few miles from B&T HQ.

@THEIS
Check with Ruag Tampa. It might be a source for some of the 375 Swiss P.
Reactions: lash

Mike Casselton said:
@THEIS
Check with Ruag Tampa. It might be a source for some of the 375 Swiss P.
Click to expand...

I get my samples the day they clear it from the FTZ. Delivery is set for 5 weeks.

Been in contact with their Industry Director for the past few days,

Nobody at the USA side has ever put their hands on it yet, lol

That Swiss P case is a tenth shorter than my edge so necked down to 338 the 285 would be 3.96 with very minor freebore.
Definitely too long for CIP mags.
Reactions: wildcats, Geno C. and THEIS

Steel head said:
That Swiss P case is a tenth shorter than my edge so necked down to 338 the 285 would be 3.96 with very minor freebore.
Definitely too long for CIP mags.
Click to expand...

They’re long and sleek for sure!

How would the Badlands 350gr .375 projectile compare to those, would it be short enough for the .375 Swiss P in a magazine?

It’s about .060 longer than the 285 so stuffed in to the max oal would be about 4” long minimum.
Maybe Theis can design a 4.25 magazine for lapua boltface cartridges.
Reactions: BCX

That sounds better suited for the Phalanx with BMG magazine length

Steel head said:
It’s about .060 longer than the 285 so stuffed in to the max oal would be about 4” long minimum.
Maybe Theis can design a 4.25 magazine for lapua boltface cartridges.
Click to expand...

That sounds better suited for the Phalanx with BMG magazine length

So the 350gr ICBM-2 may be out for mag feed, but maybe still work for single feed?
Badlands shows that as 2.160″ long

I wonder if the 300gr Bulldozer-2 would be short enough to fit in a magazine fed loading?
Badlands shows them as 1.695″ long

Maybe they could make something custom if there was enough interest in a big lot of them?

I wonder if the 300gr Bulldozer-2 would be short enough to fit in a magazine fed loading?
Badlands shows them as 1.695″ long
Click to expand...

Thanks, I had misread the caption on the picture.
The Bulldozer ones look to be shorter and fatter, which might work but I guess they don't quite have the BC of the ICBM ones.

The shorter ones were designed for the 375h&h. Not sure if they’re short enough to work or not

So it sounds like somebody(s) needs to buy a bunch of different solids and play crazy reloading day seeing what fits and doesn't...
Reactions: THEIS

It’s easier to just measure. The problem is the about of room from the case mouth to the mag wall isn’t a lot. In order to get a high ish BC the ogive needs to be long. As a single feed it would be ok, but mag fed limits it when it comes to solids.

Round is designed around jacketed bullets, given the limited length available, only game for solids seems to be raising the MV not so much the BC, and finding some sort of a balance. But remember the LE/MIL crowd especially here in Europe will not be looking at small-scale manufactured ammo they will always look for ammo supplied by a major manufacturer like Ruag, Only solids Ruag will likely have in the lineup early on are the flat nose glass breakers aka Tactical line.

At present, there is just one load with an FMJ / 22.7 g / 350 gr bullet
Reactions: camocorvette and lash

A guy might also figure if you can eject a loaded round.

We have to read it European standards

CIP does everything in European standards, hence all that metric stuff, lol

I am sure there were a number of wildcats necked up to .375 since the original .338LM appeared but ,CIP standard factory ammo for LE/MIL market is in whole other league. There are possibly less than three such new sniper calibers that appeared in the past decade on the other hand i am pretty sure at least 3 wildcats were made in the past couple of weeks.
Reactions: Geno C. and THEIS
Show hidden low quality content
You must log in or register to reply here.