I only have one turret die plate so I had to put my Lee Crimp Die on my MEC Marksman for the crimp stage. No big deal but I do need to purchase several more Redding Turret Die Plates. The other side of the turret head has my 45 Colt dies.

My first several crimps seemed too tight so I backed it off a little and then set the bullet another .005 into the case. That put the crimp grove on the bullet 3/4 down into the 45-70 case. I still think the crimp is a little to tight but I will see how they shoot at the range. I put tiny dots on my brass to separate the loads incase I loose my documentation. 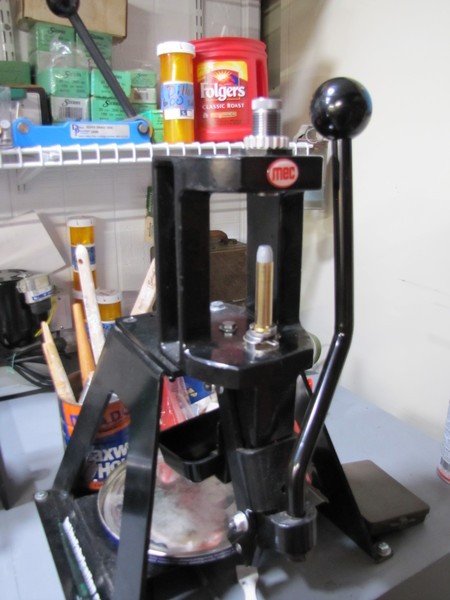 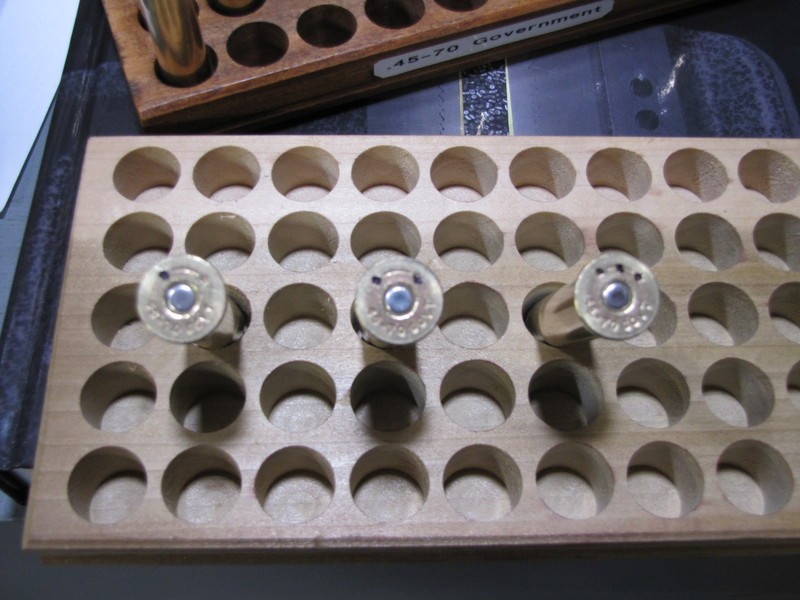 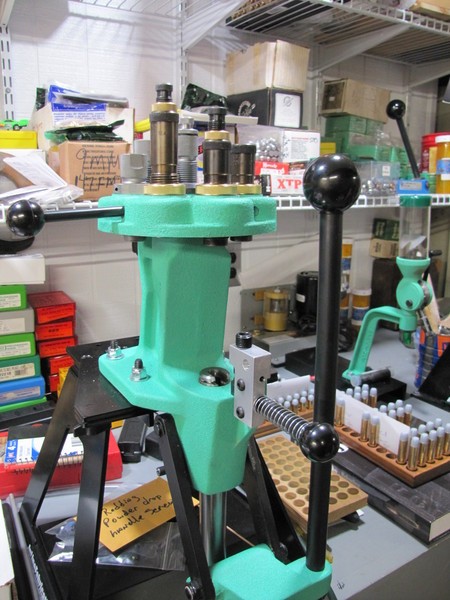 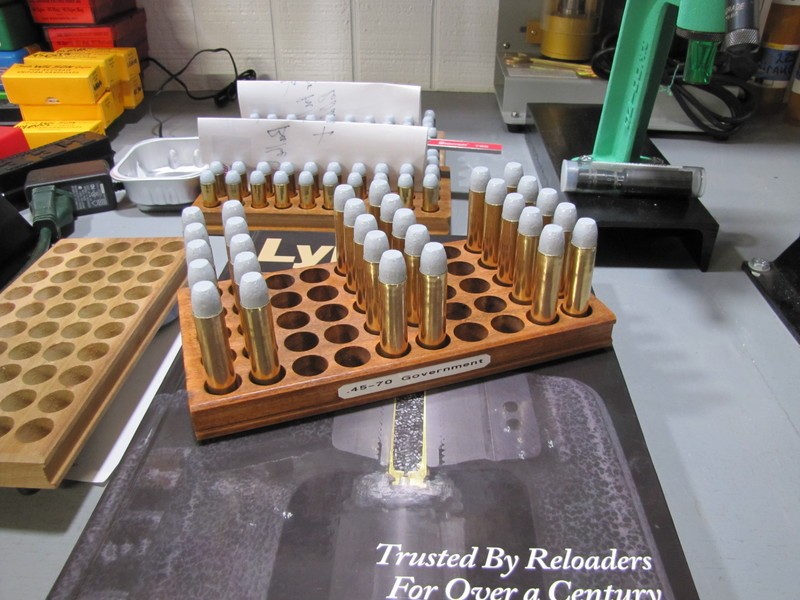 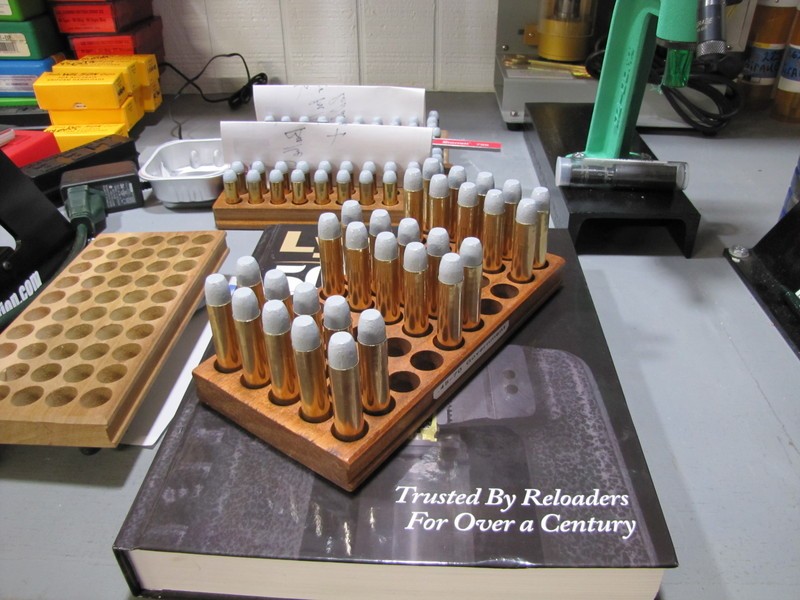 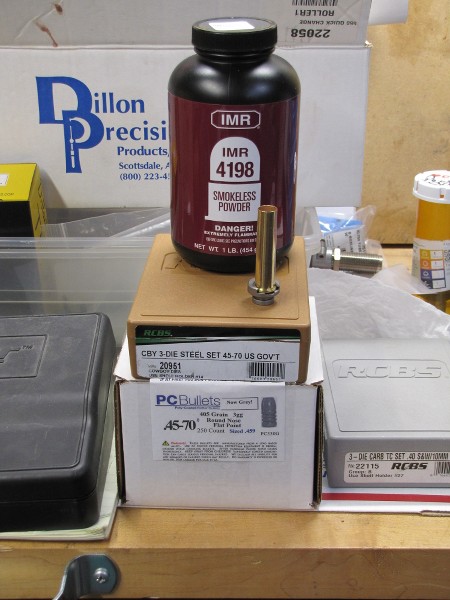 is there anything uglier than powder coated bullets? those trapdoors are cool rifles.

Powder coated 45-70 should be lipstick red.

BTW, for single shot, you probably don't need to crimp them.
D

Heck, my recipe for 45-70 recipe just involved pouring something in until near full and hammering the bullet down till it looked close enough… still have the lead bricks for melting and casting!

All joking aside, nice job!

.45-70 is one of those really fun easy and satisfying cartridges to load. Nice job. Good powder choice too.

Now if you want to learn to start casting….

Re your .300 BO loading… just buy brass. It is so cheap and readily available made from recycled 556 cases by the ton… there is little point in forming it yourself these days. Too much work for too little return when you can buy 1000 cases for $150…

Used to cast most everything I shot in larger bore revolver calibers, and rifle for several including a single cavity 330gr Gould hollow point for an older Marlin 45-70. Netted around 345-350gr in my alloy and water dropped to about 20 BHN. 31ish of IMR4198 and some poly buffer and a tissue wad to fill powder gap was money at 100yds with a Merit disc rear peep sight. Fun to shoot, light recoil, accurate and deadly. Hard hollow point would shed and leave a .458 270gr wadcutter behind to find its final destination. Still have the Marlin and the molds, and still use 4198 for all of my loading. Great project you’ve got going there.
Reactions: camocorvette
A

I'm waiting, waiting and still waiting on a new Ruger Marlin 45-70. Based on my results with Steel Valley Castings .358 and .431 Hi-Tek coated bullets, I'll be trying their 405gr bullet in the new rifle. $68.00 shipped for 250 of them. Their 44 Mag 240 gr bullet (pictured left and middle) is my go-to round. Accurate and VERY good velocity. I can send you a few of the 405's to try since sadly I can't do anything with them at the moment. 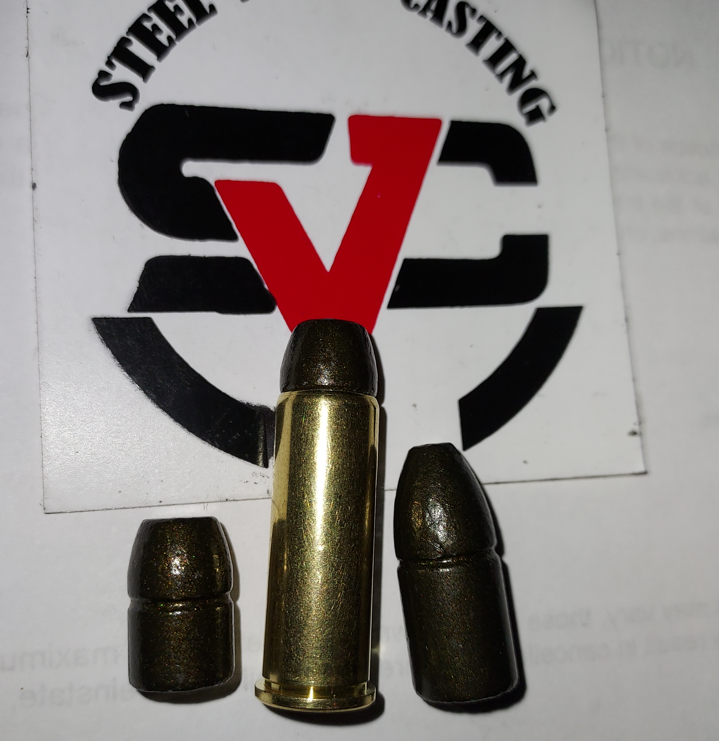 Have used Montana Bullet Works for years. Excellent quality and lots of options to dial in correct diameter and hardness for your rifle, pistol or revolver.

General Rules on How to Select a Big Bore Rifle Bullet. No one can tell you which bullet your particular gun will like, not even us.

sirhrmechanic said:
.45-70 is one of those really fun easy and satisfying cartridges to load. Nice job. Good powder choice too.

Now if you want to learn to start casting….

One of my shooting buddies just retired and purchase casting equipment. I plan to join him and learn how to cast bullets. It will be a learning experience for the both of us.

Get a copy of the Lyman bullet casting handbook. $25 at most. Worth every cent!!

sirhrmechanic said:
Get a copy of the Lyman bullet casting handbook. $25 at most. Worth every cent!!

I already have a copy.
Reactions: sirhrmechanic
Show hidden low quality content
You must log in or register to reply here.