You are using an out of date browser. It may not display this or other websites correctly.
You should upgrade or use an alternative browser.
L

With the onset of spring and soon summer temps in most of the country it will become necessary to start accounting again for intermediate and heavy mirage in elevation and windage in our Calcs.

My goal this year is to become proficient in reading heavy mirage ( I got decent last fall at reading light and intermediate mirage) and am curious what vertical and windage corrections (in minutes) you guys would recommend for elevation and windage? I was thinking close to .60 elevation and 1.20 windage but is this too conservative of an adjustment for heavy?
Last edited: Mar 16, 2021

How much to adjust for mirage depends on how hard its boiling or rolling. There's no formula or fixed corrections for this.

This is why you keep notes.
Reactions: Nik H

308pirate said:
This is why you keep notes.
Click to expand...

Where do people come up with some of this stuff?

308pirate said:
Where do people come up with some of this stuff?

Mirage can be obscuring and deceitful, but it's almost like having wind flags out on the range. Mirage isn't fixed. The heat gradients move with the wind, and alter where the target appears to be. It is a phenomena that CAN help your accuracy if you read it correctly, but it is not a fixed value to insert. You may as well ask the question, how much should I hold for wind. That depends on what the wind is doing. What the mirage is doing is almost always dependent on what the wind is doing. I've only seen it behave contra to the wind a few times, but that was in the Bermuda Triangle, so I don't count it.

How To Read Mirage — Expert Advice with Diagrams « Daily Bulletin

This was one of our 25 Most Popular Articles in 2017. We're repeating it for those of you who may have missed it the first time around. Diagrams from SouthTexasShooting.org. <img width=200 class=alignright hspace=6 border=0 src=http://accurateshooter.net/Blog/sotexaxlogo01.

Fig said:
Mirage can be obscuring and deceitful, but it's almost like having wind flags out on the range.
Click to expand...

What's interesting to me coming from a Highpower background, is how little mirage is discussed as a tool. The South Texas MTC article @Fig attached is a very informative read, although a bit technical. In reality to the OP's question, it is too difficult to develop a formula to quantify the amount of vertical dispersion of the target to nail a first-shot X.

However, the value of the mirage is in its ability to help dope what the wind is doing closer to the target. A common question here on wind calls, or as a response to this question in the forum, is "how do you know what the wind is doing at the target?" With a spotting scope, backing out the focus a hundred yards or so from the target gives you that information.
Last edited: Apr 1, 2021
Reactions: Slides and 308pirate

I learned a lot about a month ago. The mirage was boiling up and right. I shot high and right. This was in the afternoon in South Texas.
The next night (in the dark with a light on my target) I set up and shot the same place with the same dope and hit dead on.
To me..... the mirage is coming from the target. How far from the target depends on the heat, sun position and wind.

Next time I see mirage like that I will shoot where it looks like its coming from.
O

Fig Thank you for sharing this. I have not seen anything like it before. After a quick glance, do I understand rightly that the mirage correction is added to the wind value?​

In my experience, in heavy mirage that moves the perception of target location it seems to be around 2 moa Total displacement. If wind is very light and mirage is boiling and intense then then it will appear 2 moa Higher than actual location , if mirage is at a 45 degree angle then approximately 1.25 moa up and .75 with the direction of the mirage .it seems to move less on the horizontal plane, probably because the more wind the less heat can build on the surface of the ground and target.
This obviously is not a hard fast rule but I do take notes and this has been my experience several times and is usually really close
Reactions: oldiephrt

Seandradamus, this is a picture of the group I shot in the mirage.
What I experienced lines up with the numbers you said.

Thank you guys, I learn quite a bit here.
There is a big difference between reading about wind and mirage and actually shooting in it. I have had an aha moment.
I have not been keeping records yet as I didn't think I was at that point yet. I've basically just adjusted muzzle velocity in my Ballistic app to make my dope line up with where my bullet hits. I will start writing now. 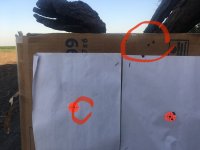 SanPatHogger said:
this is a picture of the group I shot in the mirage.
What I experienced lines up with the numbers you said.
Click to expand...

What distance was there ? air temp and humidity ?

alex2x2 said:
What distance was there ? air temp and humidity ?
Click to expand...

But that's a guess.
Reactions: 308pirate

SanPatHogger said:
To me..... the mirage is coming from the target.
Click to expand...

It is not. It is coming from all of the terrain between you and the target. Get a quality spotting scope and start adjusting its focus during a heavy mirage days. You will see.........

A lot of the fundamentals that NRA highpower rifle shooters take for granted seem to be lost on much of the "precision" rifle crowd. Understanding mirage and what it tells you seems to be one.
Reactions: Nik H

308pirate said:
It is not. It is coming from all of the terrain between you and the target. Get a quality spotting scope and start adjusting its focus during a heavy mirage days. You will see.........

A lot of the fundamentals that NRA highpower rifle shooters take for granted seem to be lost on much of the "precision" rifle crowd. Understanding mirage and what it tells you seems to be one.
Click to expand...

You are 100% right.
I guess I just said it messed up.
The image of the target in the scope comes from the target, with the mirage moving it.
I have played with my parallax and said whoa! as I focused closer and further.

And I am not a high power shooter or a "precision" rifle shooter, just a guy trying to reach out as far as I can and learn a lot along the way.
6

It depends upon your vision and the conditions where you are shooting as to a measured amount.

The generally agreed upon rules of thumb are in the southtexas article.

EDIT:
Interesting video of the effects including light that's been posted several times but well worth watching:

Question on mirage. Yesterday I went out and shot at 600 yards. I had a 66% IPSC set up and early in the morning I was able to keep 5 shot strings all on the head box of the target, which I believe is 4"x4". Needless to say, I was dialed in very nicely. No mirage early in the morning. At about 10:30am temperature picked up and I noticed a slight boil. Wind was either none or 2-3mph. I shot a 5-shot group on steel and when I went down range it was about .2 mil low. This same thing happened to me at a match a few weeks ago where slightly heavier mirage caused my impacts to be low 0.2-0.3 mils low. Is this typically the expected result in a boil? I'm a bit lost on reading mirage after my last few experiences where it wasn't an obvious left or right direction
C

What most people refer to as mirage is really looming or sinking. Strictly speaking, a mirage is a false image created by refraction, such as seeing a lake on a highway, or an object that is actually over the horizon. Looming causes as object to appear to be higher that it is, sinking makes the image appear lower.

As you look at the video above, note that is this case the crosshair appears to move above the target, that is, the image appears to be lower than the starting point. This is sinking. Looming is probably more common, the image appears higher that the actual object. However, due to uneven heating of the Earth's surface and variations in temperature gradients, either case can occur.

Note the conditions in the video. Lots of green grass between the observer and the target. Move the sight line to the right and look along the road and things will not appear the same.
Reactions: Billiam1211
Show hidden low quality content
You must log in or register to reply here.
Share:
Facebook Twitter WhatsApp Email Share Link
Top Bottom