I wanted to get some first hand info on how some of the cartridges you guys use perform on game at long range. Hornady says the Eld bullet is effective to around 400 yards, which is probably around 2000 FPS for a lot of cartridges. Would love to hear your cartridge, bullet, distance and how it performed. I hunt deer primarily.
D

I've always been a big fan of the Amax for deer sized critters and it was the first bullet I ever used when I started reloading in 2015 (140gr 6.5-284). They are similar to the ELDM and I've killed animals with both. Most did not exit but the performance inside the chest cavity was absolutely devastating and they work well at modest velocities. Here's a few experiences--

Post hunt gps tracking against gps tagged photos, suggests it went 20 yards before dropping. In my excitement I assumed she dropped where she stood and did not check in the snow. The heart was undamaged. I love game heart..... 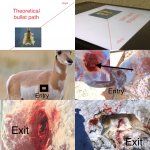 That 8,000’ altitude sure helps the VLD carry the mail!
Reactions: aljones_315 and Max
A

Here is what it looks like at sea level. I am still playing with powders and hoping to get another 100 fps out of her in the future.

Here is a buck from last season. Same rifle and ammo aprox 250 yards in the chest. He was actually coming toward us after he heard me put down a doe at 142 yards suppressed. Freakin opening day.... You can see some damage lower right under the left shoulder. Did not really lose anything there because the shoulder was ok and I mostly grind that anyway. Again the heart was missed. He fell where he stood. 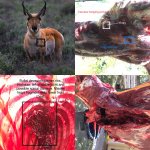 In my 20" 308, I ran SST or BT at moderate velocities as they are rather violent little pills on impact.

Now that it's lead-free in PRK I shoot the Nosler lead-free, groups about 1MOA which is fine since the shot opportunities are under 200yds.

All pretty much bang flops with high shoulder shots or quartering at sub 1000yds.

I haven't shot an elk yet with the PRC with either the 225 or 230 yet so I cannot pass comment. However, I am relatively sure of their efficacy based on past reports from others that have.
W

For me it’s Hands down my 338 Win Mag with Hornady 225 grain thumping out at 3000 fps. For the average shooter and my Second choice is the 30-06 with 180’s over a 7mm Rem Mag any day! If you’re going to shoot a Magnum Cartridge, shoot a Magnum Caliber and leave the 30 cal Mags at home. If you’re going to get kicked like a mule, then shoot a bullet that gives better performance down range!
A

Wading said:
For me it’s Hands down my 338 Win Mag with Hornady 225 grain thumping out at 3000 fps. For the average shooter and my Second choice is the 30-06 with 180’s over a 7mm Rem Mag any day! If you’re going to shoot a Magnum Cartridge, shoot a Magnum Caliber and leave the 30 cal Mags at home. If you’re going to get kicked like a mule, then shoot a bullet that gives better performance down range!
Click to expand...

I’ve got a buddy who has a .338 Lapua and shoots deer over a feeder at 1000 yards. Knows the distance to the feeder, so anything that walks out there is already dialed in. Those cartridges are just a totally different animal
Reactions: deersniper and Tikkablk

I scribbled my thoughts on the subject some time ago, to avoid having to regurgitate it every time a post such as your came up:

Before I dive too deep into this, I would like to make one thing perfectly clear; I hold no grudge against those who disagree with me, these are only my opinions. I believe that the ancient traditi…

East, a 308 with regular soft points. You're done.
West, a 308 with long range cartridges. All 95% of people need, especially if they're being ethical.

Shot placement is more important than the cartridge. Of course it is. You can drop an elk with a 243 if you use a good bullet... and place it proper.

If you're shooting a white tail you need nothing but a basic factory soft point that shoots out of your gun and practice. Don't over-complicate shit.

If you can't use a soft point, use a 20 grains or or so lighter Barnes TTSX than what you use with a standard bullet and make sure it goes real fast so it actually expands. For copper bullets I use 130 gr Barnes TTSX. For regular softpoints I'm at 150 gr. Both do the job. I actually like the copper -- no lead is a good thing and the TTSX bullets don't come apart and therefore you either never see it because it went through or you pop it out and move on with life.

Yes. Who would want less drop less wind and more energy once past 400 yards?

Not saying you don't want it. Just saying most people don't need to run to their local gun store to spend $400-1500 on a rifle when they already have one that'll work fine. If you have a 308, use the 308.
Show hidden low quality content
You must log in or register to reply here.
Share:
Facebook Twitter WhatsApp Email Link
Top Bottom