The skins need cut but i didn't think the buttpad changed on monopod vs non monopod. It changed from gen 1 to gen 2 though.
N

The DTA video on there website introducing the A2 talks about continued support of the A1 due to military contracts. Any body have any idea what military unit is using the SRS A1?

The Georgians were the first military to formally use the SRS in combat, dumping Russians at distance fairly regularly in their northern breakaway regions under Russian influence. Other allied militaries (eastern European and Middle Eastern) have used the SRS and HTI to some degree, and the headaches associated with dealing with arms exports was a main motivation in changing the name from Desert Tactical Arms to Desert Tech.
K

IronSightJoe said:
I recently picked up a Gen 1 SRS and I would like to figure out how to modify it to take a monopod. I saw in the very beginning of this thread back in 2010 you could send your rifle to DT for them to do the retrofit but I emailed DT and was told "the gen 1 chassis are not able to accept a monopod" and they wont touch it.

Anyone know of someone who could do this?
Click to expand...

I added a monopod to mine. It required having access to another rifle so I could measure exactly where to drill, then using a boring head to size the hole and make it ready to tap. I had to grind the tap flat to finish cutting to the bottom of the hole. It is a blind hole. As for the skins they can be modified, but there is no second chance if you make a mistake. They are not available anymore. I did mine with nothing more than a moto tool. They turned out great. Believe it or not, I found a used monopod on eBay for $180. The real deal! Watch out for "airsoft" parts! It had a few specs of surface rust and the bottom showed use (scratches) but who cares? I tould not have attempted the job without a milling machine.
A

Can anyone recommend a rear bag for an a1? The monopod is ok, but mine feels less stable than I'd like.

I've used a TAB Gear bag for a number of years, and recently got a Weibad bag based on a recommendation here and it's now my go to SRS bag. Easy to use as a rear bag rest or strap it to the forend to use on barriers.
Reactions: avalanche
C

avalanche said:
Can anyone recommend a rear bag for an a1? The monopod is ok, but mine feels less stable than I'd like.
Click to expand...

Thoughts on milling skins , maybe some chassis to lighten a1 some ? I think I seen a pic somewhere of one done. Not sure if messed with accuracy, or weights reduced.

They're already lightweight polymer - there's not a whole lot of weight saving you'll get by milling them out a bit. Removing the monopod (if you have one) is the first step to save weight, next is to go with a Covert handguard, and finally a thinner profiled barrel. Some weight can also be saved by going with a lighter scope and mount, but not by a whole lot without a major sacrifice in capability (the NX8 1-8x is pretty damned light, but there's no way I'm running that thing on an SRS unless maybe I was LEO). If you're daring, you could probably trim a bit off of the receiver (have a look at what they did on the A2), but in general I'm afraid it's a losing game if you're trying to turn an SRS into a lightweight rifle.

Roger that. Thinking of doing all that , but not till after hunting season , if I do. Right before hunting season I get the wild idea of lightening her up , lol.

Honestly, for hunting you should get a short, thin profile barrel. I did some hunting with my SRS, both with thin 18" barrels. It was still kind of a beast to hump all day, but nothing like when using my full ELR setup. With a good sling and a short barrel, it's a pretty compact and maneuverable platform.
Reactions: Snipe260 and 1badbarrel

1badbarrel said:
Thoughts on milling skins , maybe some chassis to lighten a1 some ? I think I seen a pic somewhere of one done. Not sure if messed with accuracy, or weights reduced.
Click to expand... 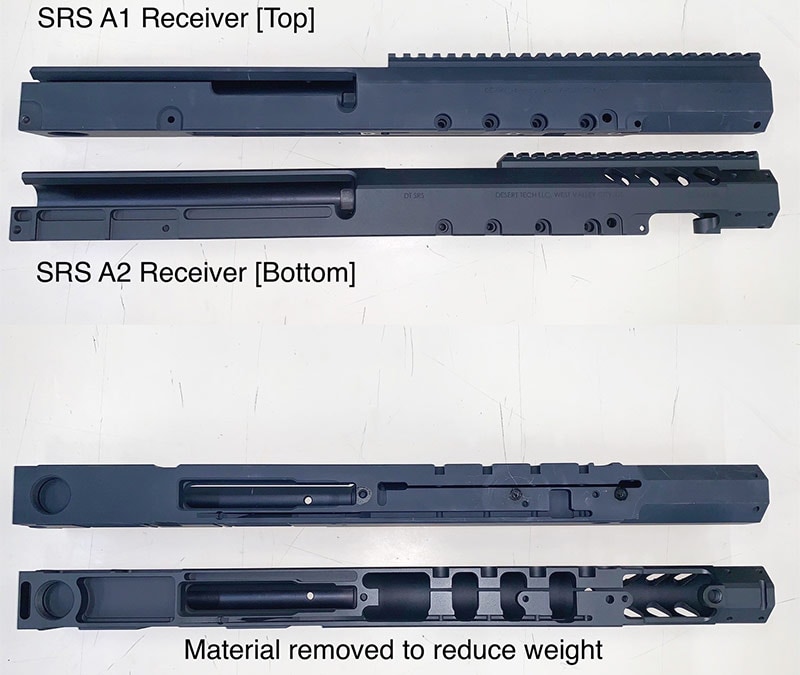 Not something I would undertake, but here's the A1 vs A2 photo for reference.
Reactions: Dogtown and 1badbarrel
D

You can always have your factory barrel rethreaded to 5/8×24, but i haven't bought a factory barrel in years. I have a SiCo Omega and a SilencerTech, both of which are threaded 5/8. Get whatever thread pitch you want

I use the Ultra 7 and Hybrid 46 suppressors and Area 419’s mounting system for my setups. It’s a little expensive to start but has been a solid option for me. I don’t shoot unless I’m suppressed anymore.

Listens to the voices

DoctorBen said:
What are the crowds thoughts on Supressors? Get DTA's or a 3rd party?
Looking at the options, their 3/4 x 24 TPI brake pitch to 1 1/6 x 18 collar is... unique.
Anyone got a favorite?
Click to expand...

TBAC ultra 9 CB has been great. It’s a pill to buy a bunch of their muzzle devices, but it does allow you to unify different thread pitches to the same suppressor. I’ve got 2 factory barrels 3/4 x 24 and one aftermarket 5/8 x 24 for my A2. I also had a random 3/4 x 28 threaded barrel at one point that was on a used rifle I purchased. Same system solved the problem for me.
M

DoctorBen said:
What are the crowds thoughts on Supressors? Get DTA's or a 3rd party?
Looking at the options, their 3/4 x 24 TPI brake pitch to 1 1/6 x 18 collar is... unique.
Anyone got a favorite?
Click to expand...

I’ve got a Thunder Chicken on my ES Tactical barrel and I love it. Aftermarket barrel means I can go with any thread pitch I want.
Show hidden low quality content
You must log in or register to reply here.
Share:
Facebook Twitter WhatsApp Email Link
Top Bottom