So I figured I'd just post this information for anyone who was curious or who might want to try their hand at making their own side-charging handle for their REPR (I'm currently considering working with a friend of mine to make one for my own personal rifle). I will mention that I'm still in the process of gathering information, so I'll try to update this when I get better data and/or my hands on some of these things; I am mostly working off pictures, videos, and such.

-The MKI REPR charging handle appears to be either a direct copy or nearly identical to an Israeli "Izzy" FN FALO charging handle, specifically the "Heavy Barrel Variant". (Honestly, they look like they match up almost exactly except for the Israeli one having a plug and pin retention for the ball detent vs. the REPR's pressed in ball detent) 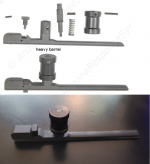 -I believe the FN FALO was a metric pattern with the Israelis opting to go for their own thread for the barrel (correct me if I am wrong here, I cannot seem to find a definitive answer other than it seems to be one of the earlier variants made under license from FN.) Though I don't know if the actual charging handle dimensions were that significantly different between the two patterns in terms of the fit for the rail and the such.

-The main differences between the MKI and MKII REPR Charging handles appears to be the removal of the ball detent retention at the front of the handle (this appears to have been modified to a latch that interlocks with a screwed in latch block on the receiver) and the removal of the the forward assist. (Not entirely sure about the last part, someone with a MKII REPR please feel free to correct me, I cannot find any mention in LWRC's own literature or reviewers showing that it does allow for forward assist and I don't see how it would based on what I have seen of the design.) 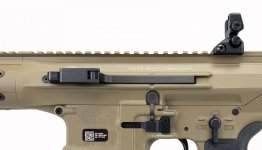 I got an email from T. Mark Graham who runs https://www.arizonaresponsesystems.com/ and he gave me some information I found interesting. I reached out to him because he seemed very knowledgeable about FALs and I am still considering sourcing an Israeli style charging handle (I kind of don't want to cut up an authentic one for a project though...)

The Israeli style forward assist charge handle is the only variation of​
it's type.​
​
There were two (at least) versions of the T48.​
​
Then the current standard FAL​
​
L1A1 as far as I know only had the one folding version (subtle​
differences in Aussie/UK but interchangeable.​
​
I've looked at the LWRC and the "sniper" one appears to be a FAL​
derivative but not an actual FAL.​
​
The guy who designed the AR receiver to accept the folding charge handle​
originally sold it to the old owner of American Spirit and the new owner​
didn't do anything with it, so I guess LWRC copied the idea.​
​
Their folding version is unique - incorporating the slide profile of the​
Israeli with the L1A1 knob. The other looks primarily Israeli but is​
subtly different.​
​
-T. Mark Graham​
Click to expand...

That's all I have at the moment, I know it isn't much; but I figured I'd share it for anyone who wanted the information. I was also hoping to get some input from MKII owners and such. I'm currently waiting on word back from LWRC on how much a MKII charging handle would cost me if they would sell me one individually. I'm also trying to source an Israeli charging handle to see if it is interchangeable and to possibly modify into a folding charging handle. I didn't have time to full dimension my own charging handle, so I'll have to give that another go later. I am trying to make a folding one that retains the forward assist (because why not drive myself insane?) I'll try to update this if I ever get around to getting full dimensions and/or actually make a custom folding handle.
Last edited: Feb 26, 2022
Reactions: James998fe

I spoke with someone recently at factory on whether or not the new folding CHs
were compatible with mk1s.

Received a hard no on both fitment and individual sale.

I certainly look forward to any progress you make.

Sorry to be the bearer...

geistacwm said:
I spoke with someone recently at factory on whether or not the new folding CHs
were compatible with mk1s.

Received a hard no on both fitment and individual sale.

I certainly look forward to any progress you make.

I asked them the same thing when the MKII came out originally (specifically about the handle and the handguard) and was told the same thing. Looking over pictures and videos of the MKII, I'm not entirely convinced that you couldn't install the side-charging handle and drill & tap the divot for the ball detent for the retaining latch block (which is what it looks like they did); I'd have to get my hands on a MKII to check with my Mitutoyo calipers but it doesn't look like they changed the dimensions of the track and slot for the handle (as T. Mark had said, it looks like they took their MKII Israeli style handle, got rid of the forward assist and modified it with an L1A1 folding handle) . I just don't know anyone personally that I could look at their MKII and I haven't had time to see if the gun shop I go to has any MKII's on their wall to hold and look at (I was considering upgrading my MKI to a MKII, but I had heard mixed things about the QC on the MKII's when they first came out and I haven't heard/seen anything indicating it was resolved or improved recently so I have been hesitant). So I am trying to reverse-engineer/make determinations based on 2nd hand reference information (pictures, videos, forum posts, etc.), which is a pain...

As for obtaining one for individual sale, I'm expecting them to come back and say that they won't sell me one privately (I sent them an email last week and am waiting to hear back). LWRC is a bit weird about spare parts that aren't on their website, which I have run into with other smaller "boutique" companies (not just in the firearms industry). Which is why I was thinking of just finding an Israeli style charging handle to see if it's easy to modify to fit. Was talking with my friend and I think modifying an existing design would be easier for him than making one from scratch (he'd be doing it on his free-time so less work for him is better since this would be a one off).

In any case, even if I don't end up making on or I decide to just upgrade to a MKII, I'll update this thread with as much information as I can (ideally when I get some more time to really sit down) I might upload dimensions on the handle and it's parts, if not a CAD file for anyone who wants to pursue it further; pursuit of knowledge and all that.

Id be interested in this as well because it bumps into my plates but honestly its the least of my worries…
Show hidden low quality content
You must log in or register to reply here.