I've been shooting 16-20" .308's forever. I recently picked up an AXMC that came with a 26" 6.5Creed barrel. Needless to say, it's a long rifle and I'm hanging a suppressor on the end as well. So, I'm wondering about cutting this thing back to somewhere around 16-20" but am completely unfamiliar with this cartridge. Will I be chopping the legs out from under this by going that short? 308's do well short, does the 6.5Creed?

Wondering the same thing. Thinking about doing a short 6.5 creed


Sent from my iPhone using Tapatalk

I know there are guys out there shooting short 6.5's. I've seen mention of guns that are 16.5" here on the Hide. Hopefully they'll see this and respond. I just want to know how short can the barrel be and still push a good bullet to a speed that matters. Will I still be better off than shooting a 308?
4

heres a pretty good read for you guys....

Take it with a grain of salt. You don't lose velocity over 24" with the heavier bullet like that article says.

Oh yeah, it looks great too!
Reactions: TheChief and Jknox1030
4

Where did this Lowlight character learn to shoot? Can someone give Rex a call, I need an expert to verify those are hits.
Reactions: ototallydude

this is a question I have asked myself too....

at what velocity does the 6.5 lose (or have marginalized) its huge ballistic advantage over the 308.....
W

supercorndogs said:
Where did this Lowlight character learn to shoot? Can someone give Rex a call, I need an expert to verify those are hits.
Click to expand...

He knows what he's doing...look at the rag around his neck. Looks legit...
Reactions: TheChief

Ya know, I recently 'discovered' how well the 142 does out of a short barrel. I e always used other 6.5s in my .260s, but then picked up this 20" Tikka. Shot some FGMM with the 142s at a relatively slow 2575 fps and doped them out to 1000. Then shot a local match with the rest of them and was very pleased with the performance of this bullet out of a short barrel. I am now working up a load for this rifle using the 142s (or will be once recovery from freakin' Irma is done with).
Last edited: Sep 16, 2017
Reactions: kai24
K

Ill report back how it does to 1k.

42 grains of h4350. They are pretty mild. I figure no point in running shit hot, if I want faster I will get a bigger caliber. Im thinking it shot good in the upper 43 grains and I didn't feel like losing primer pockets that quick.

42 grains of h4350. They are pretty mild. I figure no point in running shit hot, if I want faster I will get a bigger caliber. Im thinking it shot good in the upper 43 grains and I didn't feel like losing primer pockets that quick.
T

I've been kicking around the idea of a 18-20" barrel for my AX in 6.5CM to go with the 26" I already have. Frank isn't your average shooter, but that video is encouraging.

Just a quick mention: I did not see any pressure signs at 42.1 (.6 past what manual says is max)

Base of the Rockies

With factory Prime Ammo I am getting 2800fps

i run a 20" 6.5 x47, have done for going on 10 yrs
Creed will work fine in a 20, better than any 308 period
Short barrels dont require any special voodoo, however they can perform exceptionally with right bullet/powder combo
Now lapua does creed brass with small primer, i may swap over after this barrel
Small primer imho opinion does make a difference
You really want to that 20" to perform like a 24"
lose the 140, sure lots of folk shoot them but your limited by barrel lenght. Which hinders fps, not as much as you would think but it does
Swap to 130gr bullet, several out there, sierra gets the nod from me at this time
lose the h4350, run RE17, you will pickup 100fps or so over h4350 with same load
load so boat tail junction is at case neck junction, barrel of course should be chambered with this in mind
Ideally you build rig from get go to run a short barrel, thou having chambered redone not a big deal
My lil 20" x47 shoots flatter than the 26" 308 running 155 @2950fps it replaced
20" creed running 130 over Re17 will put a big grin on you for sure

Im running a 2012 AX with a used barrel i bought here , 16.5 Benchmade chambered by TS Customs . I wasn't expecting miracle ballistics but im more than happy. 123 eldm 2000mr powder and Br2 primers in the 2900s Suppressed. Hornday brass isnt lasting but three firings due to the load but there are no ejector marks no swipes no primer seapage no sticky bolt... load at your own risk. 1100 yards im dialing 9 mils of elevation at sea level and its plenty consistent. I will likely stay at 16.5" when i burn up this barrel. Dont be scared to go with a short barrel 6.5 creed its better than a 20" 308 in my opinion.

You two have totally peaked my interest. I recently picked up a 20" .260 and haven't settled on "the" load yet. I'm much more of a load 'em and shoot 'em kinda guy and not so much of a perfect load kinda guy, but I've been mostly loading for longer barrels and powder choices can be different for shorter barrels. I've never tried 2000mr, but now want to do so for this rifle.

Here is a pretty good video

Were talking about pretty similar velocities here, and BC will always trump speed. Regarding the 142(old bullet)...its got a better BC than pretty much any iacketed .30 bullet until around the newer 200 gr 30’s. With 308 sized cases, the 6.5 bore size just wins. Plug a few combos into the ballistic solver, and see for yourself.

For those of you using 2000-MR How is the velocity variance in relation to temperature?

For those of you using 2000-MR How is the velocity variance in relation to temperature?

No solid data on temp sensitivity, but results seem to be somewhere between 1/2 to 3/4 fps per degree F. That's not terrible unless you are somewhere like the desert where you can have 50 degree temp swings in half a day.

Now I just have to do a bit of load development to see for myself.

What load were you using?

Alliant, in all of their wisdom, advertises this as a great powder for use with heavy bullets in the medium cartridge, but only lists load data for 90g and 120g varmint bullets in .260. Really?
Last edited: Nov 19, 2017

lash said:
What load were you using?

Alliant, in all of their wisdom, advertises this as a great powder for use with heavy bullets in the medium cartridge, but only lists load data for 90g and 120g varmint bullets in .260. Really?
Click to expand...

Thanks. That will work with what I'd planned. I figured to start my pressure loads at 39.0 and go to 42.5, based on just what I could find reading what little is out there. I'll add two more charges to bring it to 43.0 and see what my rifle likes.

Oh yeah, it looks great too!
Click to expand... 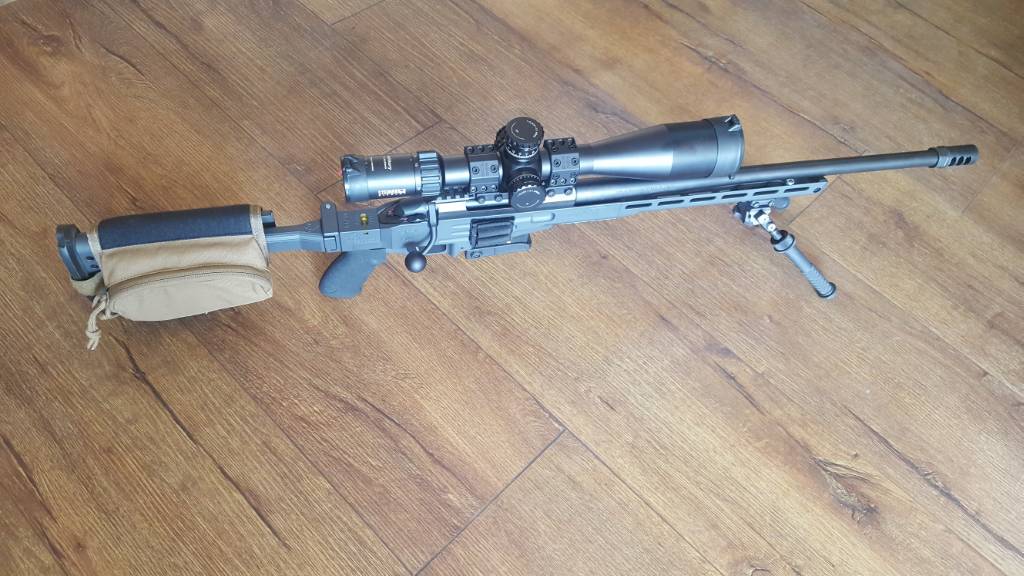 Sent from my SAMSUNG-SM-G890A using Tapatalk

Sorta, kinda, but with just a couple differences I made.

I'm running a 16" Faxon barrel on an AR10 build. My old school Chrony is saying 2650 with Factory 143 ELDX and then ran it over a Gen 1 magnetto speed which said 2450fps. 2450 does not jive with my confirmed dope out to 600 on steel (based on published BC from Hornady). I'm dialing 15 MOA to get there consistently, which is more like 2575 fps based on JBM. Either way I'm happy, beats my elevation for my old 20" 308 bolt gun and significantly better wind (almost 50% better). Absolutely loving the round. I'm not a precision/bench rest guy, use primarily for hunting, but am getting 5" groups at 600 driving a gas gun that I'm not used to (yet). I run a 30P-1 on it.

Guys are shooting 20" 308s no problem, 6.5 is ballistically superior to 308 so I dont think you should have a problem.

Anyone trying RL-16 with your shorty Creedmoors? If so could you please post your results?

I'm running a 18" 6.5CM with Hornady 147gr ELD-M and it's a hammer. Drops a little more due to slower muzzle velocity, but that has zero effect on making hits.
Reactions: Farmerbrown32, BlueHOG41 and Hondo1

These were higher velocities than expected, but after cleaning rifle several times am guessing new Savage barrel is a little tight. Got better accuracy after removing the factory brake/compensator.

Killed a guy with a Trident...

Hondo1 said:
Anyone trying RL-16 with your shorty Creedmoors? If so could you please post your results?
Click to expand...

I know this thread is a bit old, but I found it useful so I'll add my 2 bits. I was concerned that my velocities were too low, but after seeing these posts I think I'm right where I need to be given the short barrel.

My charge weights and velocities on a recent trip to the range were as follows:

Found good nodes around 2554fps and 2600fps. Feeding from mag so can't seat to lands, however tweaking the seating depth led to a nice group at 2554fps. Going to try 2600fps and see if it yields equally good results.

Hope that's helpful to someone!

The riddle of steel...

I was interested in a shorty for hunting so I picked up a Remington 783 16.5” I’ve been enjoying shooting off hand so I’m running an eotech XPS2 and was able to stack rounds on top of each other on a steel plate at 100 and hit 500 off a tripod pretty easily, so far velocity started at an average of 2515fps with 140s from Hornady American Gunner factory ammo for break in (30 rounds 10 cleanings) next shoot I got an average of 2211 from a starting load of 32gr of varget SD 5 ES 13, max load per Lyman manual of 34gr (VERY conservative IMO) gave me an average of 2316 with 140 BTHP “match” hornady bullets. 120ELD Match Hornady factory average was 2673 with the last round hitting 2780! I want to try Nosler E-tips for hunting...

Any thoughts on 34gr max load per the manual? Online hodgdon website max with 140gr AMAX using varget was 35.8...?