The One State You Can Draw Freehand, USA

Hi all, posting a Lesson Learned here in hopes of helping somebody else out down the line.

For those who are unfamiliar, the Frankford Arsenal M-Press is a Chinese-made reloading press of a similar design to the long-running and well respected Forster Co-Ax press. For the MSRP of $300, you'd be off your medicine to purchase the M-Press over the Co-Ax, but this post is coming to you in the middle of "Interesting Times" and reloading supplies of all kinds are in sporadic supply, and when available, are sometimes only so on the secondary market at inflated prices. When I purchased the M-Press featured below, I was looking for a Forster Co-Ax but could not find one -anywhere- -at any price-. This situation may have already resolved by the time you read this, and if so, just buy quality from the start. Regardless, these presses are out there, this failure happens on some of them, and you can self-recover back to some amount of functionality with homeowner-grade tools and skills, see below. The M-Press was $110, shipped, off Amazon. And so, knowing better but wanting to start making PRS-Quality ammo, I leaped and I have learned.

First, if you also own one of these and haven't yet figured out the Die Block situation - they're trash, and there's nothing you can do to fix them. Use them for utility dies that do not require precision, like your universal decapper and your bullet puller. The fix is to use two of Forster's excellent locking die rings - adjust the upper most lock ring to set your die depth, and the lower most lock ring to make the whole assembly fit in the press to your desired level of slop. There are a few quality threads on this factor already, so I won't cover it in depth. 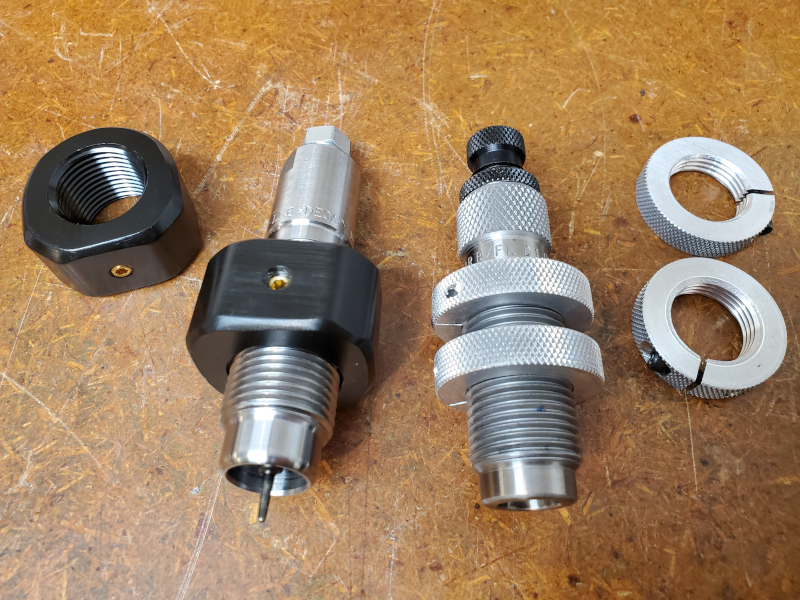 Second, some very tall bullet seating dies will not clear the Co-Ax style handle. The shellholder system is opened by a forcing cone that screws into the base. These screws are a common M10 thread, and you can get M10 automotive studs as well as a section of female threaded hardware at your local hardware store. If you're not loading full-length Magnum ammo and don't need all the travel, but DO need to use your very tall bullet seating dies, these can be threaded together with your OEM forcing cone to raise the resting level of the shellholder, which brings the resting postion of the handle in front of the die, negating the clearance issue. You'll need to cut up each bit of hardware to set the height and stop correctly, but the real joy is being able to just buy M10 threaded commodity parts. As you'll see soon, this isn't always the case with this press. 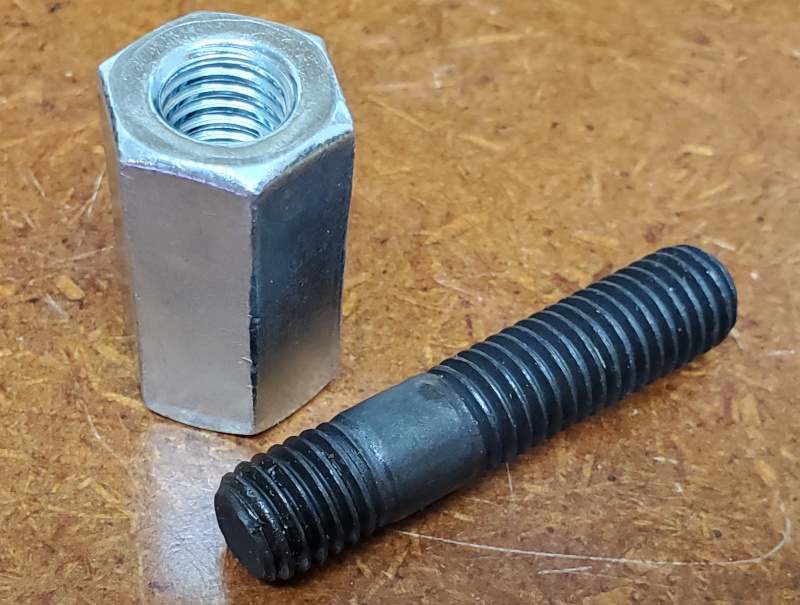 Down to the real issue: The universal shellholder system is similar to Forster Co-Ax's system in that two jaws close in on your case to hold it in place while you cycle the press. This is completely sufficient when you're raising the case into a die, but hits trouble when you reverse the motion and need to pull a case OUT of a die. All the force goes into the black metal retaining plate, which is held on to the press with five of the tiniest, shortest screws you'll have the pleasure of dealing with today (they're an oddball size, too - between an M3 and a #6, but very much neither of those). And if you've made it this far, you're probably dealing with them, because if you're sizing brass with this press and you experience a stuck case, you very well could have the jaws put enough force into that plate as to bend it, tearing the screws right through the threaded holes in the base of the press. Congratulations, you now have the double gift of a case stuck in your die, and your press is out of commission. Here's what it looks like. 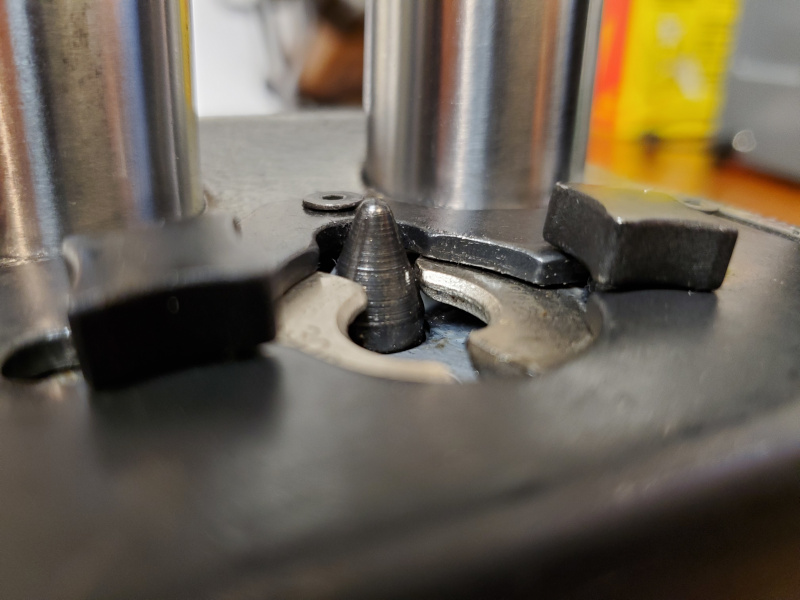 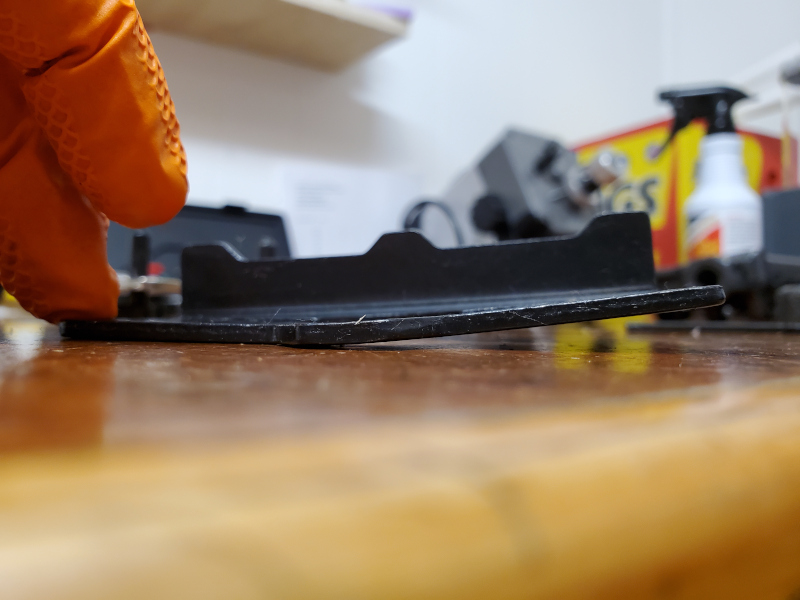 So, a 100% legitimate course of action here is to contact Frankford Arsenal, tell them what happened, and ask if they can do anything for you. They were agreeable enough to me, and did send me a brand new M-Press, free of charge. That's great, really is, but you're out a press in the meantime and like me, you may be up against a deadline. They don't want the old one back, and hey, you can't make broken any worse, so why not grab a #29 drill bit, a 8-32NC plug tap, and six 8-32x1/2" screws and attempt a repair? Full credit for all that follows to Harold Demes: of note, I followed his advice, not what he actually did, and went thicker and longer. He was right, there's plenty of room for a 1/2" long 8-32 screw and I see no reason not to go big. 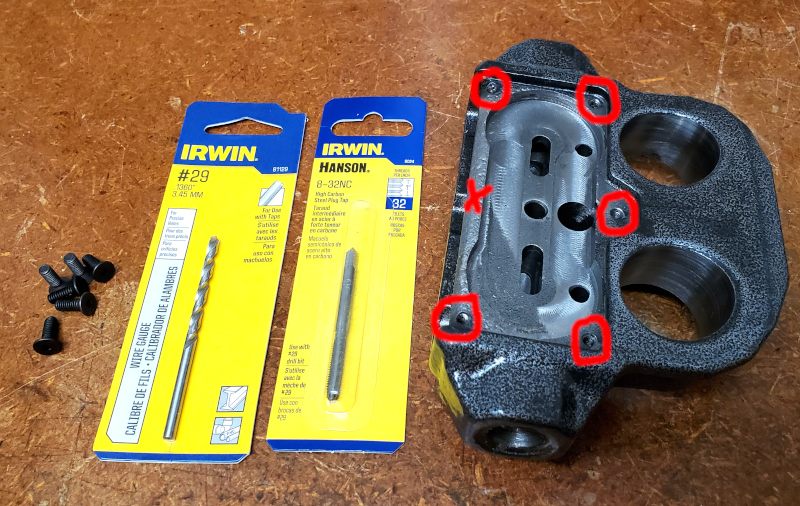 You'll want to disassemble the press to do this, plenty of good resources on YouTube show that operation. The plate will be badly bent up, I used a bench vice to smash mine back into a semblance of flat. You'll use the #29 drill bit to drill out all five of the circled holes. Same as Harold, I also attemped to drill a brand new 6th hole opposite the one existing middle screw, where I have the red "X". If you choose to do this, do note that you'll be drilling into a non-flat surface, so I would recommend VERY carefully measuring where that hole needs to go off the top plate, install it with screws, THEN drill the hole through both top plate and press base. You'll then tap all six holes with the 8-32NC plug tap, open up the holes in the shellholder retaining plate, add a bigger countersink if you would like, and you're good to reassemble. I immediately put mine back to use resizing brass with zero issues. If you can't wait on the replacement to arrive, this is a completely viable way to get your gear back up and running with common homeowner-grade tools until a better solution can be found. The screws you'll be using are considerably thicker and longer than the ones from the factory, and you should have non-zero service life following this repair to plan out a replacement.

Thanks, all - hope this helps someone.
Show hidden low quality content
You must log in or register to reply here.