Ok I have a poll question M1A or AR10 SASS

biker chicks are gross, I would never compare betty to a biker chick.
B

I went to the Interservice matches this year. I stand by what I said earlier; the AR10 is a better LR gun than the M14.

The only teams using the M14s still are the Navy and Army Reserve. USAR has some very good shooting M14s.

The Army won the team match again this year with their AR10s. All-Guard was 20 points behind. USAR was 37 points behind Army.


Sent from my SCH-I535 using Tapatalk

I see this thread was busy while I was gone. Well I made my decision on what one I pick them up tomorrow. I got a M1A NM and a POF P308.

220 Swift AI said:
I see this thread was busy while I was gone. Well I made my decision on what one I pick them up tomorrow. I got a M1A NM and a POF P308.
Click to expand...

Either gun is a good gun, but I would buy the AR-10 because it has some better points that should not express here on this forum.

Talk to some snipers about their ears ringing.

The wood stock absorbs moister and may change the tension on the screws.

The pistol grip is a big plus along with the attachment platform.

Repairs are easy and cleaning is too.

The 100 round drum would help when using suppressive fire.

There are no screws to change tension on.

Good choice getting both. I love my m1a, but I wouldn't mind having a pof also.

Just picked up a SASS, and have had it out once, it's a nice shooter. Since then I've mounted a NF and am in the process of refining the trigger. Hope to get to the range at the end of the week.

Phil McGrath said:
Reread my post its on top, I said that NTT is/has been a Army show. Precision Shooting vol.47 No.9 January 2000, pg 12. clearly has a picture of S/Sgt. Watson with her M14 as the Service Rifle Champ for the 1999 National Matches... If need be I can post the picture? I never mentioned that the M14 was harder too shoot due too its recoil, YOU DID I have said from the start that the M14 is not the Current As Issued Service Rifle and nothing more... I just brought up the fact that Watson was a women that shot it and took the Big Show, I won't mention Capt. Murdock or Catherin Bug the youngest girl too leg out at 15 with a M14 shooting issued M118NM ammo.. So my example being based on just 1 isn't the case now is it?

As a side note Christopher Stark, took the 1000yd Porter Match with a M14 and Jamie Mordarshi USN, Farr trophy.
Click to expand...

It may have been an old file photo but Watson shot an M16 at Perry in 1999 during both CMP and NRA weeks (my first year there). Here she is with a Springfield: 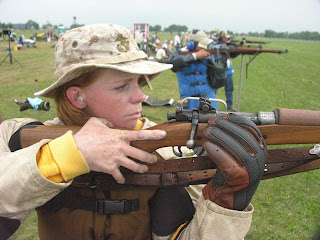 The M14 is still (technically for both CMP and NRA) a Service Rifle (as is the M1).

She's cute! Nothing more attractive than a woman shooting!
B