Passing the torch....... for the second time

After yesterday's session with the .22's, Latgo and Julian switched to 20 gage and shooting clays. Saylor Jean has always been relegated to "pulling the string", as she says......... but was looking at me with a rather sad face. I asked if she'd like to shoot too, but of course a 20 gage was far too much for both her stature and recoil. I told her that "Grampa will find a shotgun for you. Her little face lit right up.

I went into the house and began a search (futile search I thought) for a youth .410 shotgun. I placed a wanted ad on Montana Gunbroker and went back outside. When I cam back in, I couldn't believe my eyes. A webmaster on one of my forums had a Mossberg Youth .410 in mint condition! I promptly paid for it with PayPal and let Saylor know.

Latigo told me this morning that she was announcing to anyone who would listen that "she wasn't pulling any more darned strings! She was shooting those things in the air!" LOL Saylor Jean does not allow her brother to do anything that she won't do. IE: Motocross riding, shooting .22's and shooting bows in competition. Can I prove that? Just Look!

Great job. Its my granddaughter following my passion

Here she is with my Model 1873 Springfield eating up my 45-70 shells. She already got rid of my 50-70 Springfield rounds before I took the picture. 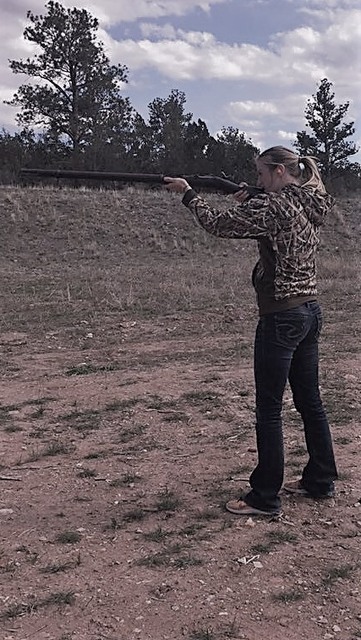 Holy Camoles!!! That's a lot of rifle for a little girl!! Congrats!!
S

You should see my wife shoulder my .62 black powder Fusil-de-Chasse... The gun is literally as long as she is tall!
Reactions: zfk55sr

Too much to hold up, so it's always from a rest.

Be nice to the kids and yourself and get 20 ga. shotguns. .410 costs too much to shoot and too hard to find. No sales for cheap ammo.
Ask me how I know...FM AKA Pa

There are 4 or 5 20ga. shotguns in the armoury. My Grandson uses them and sometimes one of the 12 gauges. They're too much gun for my 8 year old granddaughter. Too long, too heavy and too much recoil for her little frame. We have 5 presses, one of which is a SL900 and has all three setups, 12, 20 and 410 for reloading. Mike, I'm not sure how many rifles and shotguns are in the armoury, but the kids and my grandkids have a wide selection of military and commercial rifles whenever they're ready or big enough for them. My 12 year old grandson is well experienced in the reloading room and his sister will be following suit right behind him. That's all the result of 60 years of dealing and collecting. Now that I re-read that last line......... Damn! I'm getting old! LOL But watching the clan do their thing on the range here, I'm not unhappy for all those years.

...... and speaking of long and heavy. This is my Grandson with one of his favorite rifles. A .41 Swiss Vettterli rifle. LOL

..... and my Son working in the armoury reloading room.

Am I a proud old Grampa? LOL

PS: Forgot to mention..... I found a Mossberg Youth .410 on Monday for her. Should be here today. I got lucky.
Reactions: canman

Responsible firearms safety training at a young age is essential. Bet they pass on your passion / respect for this part of our countries history.
God Bless
Reactions: Greg Langelius * and zfk55sr
Show hidden low quality content
You must log in or register to reply here.
Share:
Facebook Twitter WhatsApp Email Link
Top Bottom