Received my Impulse predator .243 April of 2021.
I'm a sucker for straight pull rifles and I couldn't wait to get my hands on the first American made straight pull rifle that uses AICS magazines.
After sighting it in with my XP38 and XG50 scopes, I decided to make it my primary rig for the late 2021 and early 2022 varmint season.
NY's coyote season runs from Oct 1st to almost the end of March.
Out of the box, the bolt was slow and also barrel heavy.
After break in, lubrication and some range time, the bolt is very smooth.
I got the barrel spiral fluted and although the fluting made it a little lighter, it's still barrel heavy.
I'm anxiously waiting for the carbon fiber X barrel to arrive to alleviate that issue.
Performance wise, the rifle operated flawlessly in weather conditions ranging from -30 to 100 degrees, during flash blizzards and rain storms.
No issues with feeding from the AICS magazines, as would be expected and I'm glad Savage made the decision to add that feature to the Impulse predator.
Accuracy wise, it's a tack driver with almost every weight projo I tried in the 65-95grn weight range, but was a one ragged hole wonder with 70 Grn NBT's, so I procured a lot of them.
Hopefully it'll shoot just as good with the X barrel that has the same twist rate as the factory barrel.
Savage has upped their game with the Impulse rifle line, but they've taken care of all of the issues that Savage rifles are known for with the Predator model using AICS magazines.
They just need to offer it with a carbon fiber barrel option to alleviate the weight concerns of hunters.
With the barrel extension and swappable bolt head features, Savage has added the ability to make it even easier to change barrels and calibers.
That's as soon as they have barrel extensions and bolt heads available for purchase.
In conclusion and after a years time of lugging it over hill + dale in upstate NY, I'm keeping my Predator.
Once the X barrel arrives, It'll be my go to varmint rifle for the foreseeable future. 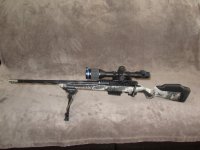 Well, I finally received the 20" X-caliber CF pre fit .243 barrel for my Predator.
Haven't shot it yet, as I'm waiting for the Lehigh 82 grn controlled chaos projos to arrive.
Since I live in NY and the politicians here are in a race with the west coast politicians to see how badly they can screw hunters, I decided to skip the drama and take the initiative to switch to an all copper projo for when they finally decide to stop dicking around and ban lead ammunition for hunting in NY.
I used my digital bathroom scale for weighing, but I can tell you that it's a lot less barrel heavy, which was my #1 goal.
Rifle with CF barrel and titanium linear compensator weighs in at just over 6.5 lbs . 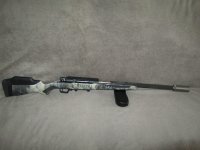 Weighs around just under 10lbs with the Halo X50 , LC and a loaded 5 round metal AICS mag, as I would be carrying it in the field. 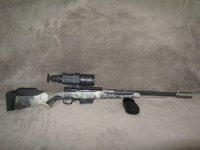 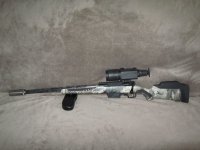 Can't wait to hear how it shoots.

Hopefully shoots just as well, if not better with the new barrel. I'm sure we'll know after next coyote season.

I bought a 110 Timberline last year myself and set it up for the F-I-L for deer hunting out here. Feeding is a bit rough, but the action and ejection are the smoothest I've felt on a Savage. The fact that it has shot sub-MOA with all three bullets and powder charges I've tried in it just blows me away. Sometimes you get lucky.
Reactions: Digetydog and shoots100
S

The only reasons I bought the predator model, was because it uses AICS magazines and is the first American straight pull centerfire rifle.
My only complaint, was it being very barrel heavy.
$700 dollars and a 5 month wait for the CF barrel solved that issue.
The only issue I've had with savage rifles, is dealing with the shitty factory magazines.
Savage factory magazines suck and are a little less sucky after doing some work to them, but every rifle has always shot lights out.
I know Darkeagle makes a reliable aftermarket magazine for them, but they never have them in stock.
Reactions: diggler1833
B

When you fluted the barrel did you get any boar deformation?
S

BearFootBowHunter said:
When you fluted the barrel did you get any boar deformation?
Click to expand...

Nope, was only a few inches off POI after removing the barrel, having it fluted and reinstalling it.
Never had an issue after adjustment.
Reactions: BearFootBowHunter
S

Since Savage isn't selling any parts to be able to change barrels on the Impulse rifles they sell, I visited a machinist friend and after almost a years time, we finally made all of the parts for the quick change barrel kit.
Barrel extension, Recoil lug and flat sided barrel nut.
I've put almost 100 Semi hot rounds through the factory .243 barrel and 50 through the .260 barrel without a hitch.
Even did some POI test's and although it was only done at 25 and 50 yards, there was no significant POI change.
Since the barrel assy has the recoil lug attached to it, you need to remove the barreled action from the stock to switch barrels.
I can change barrels in under two minutes.
Pics; 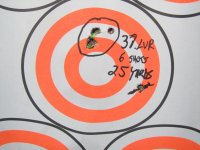 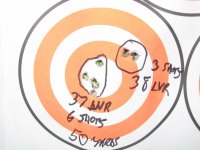 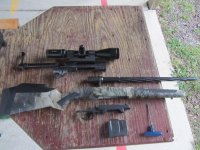 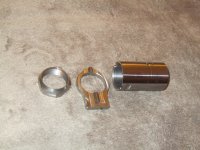 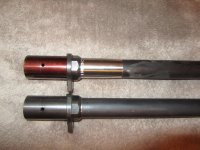 Savage Impulse seems to be rarer than unicorn teeth. Has anyone bought one?

Has anybody heard of aftermarket support of Savage's Impulse?