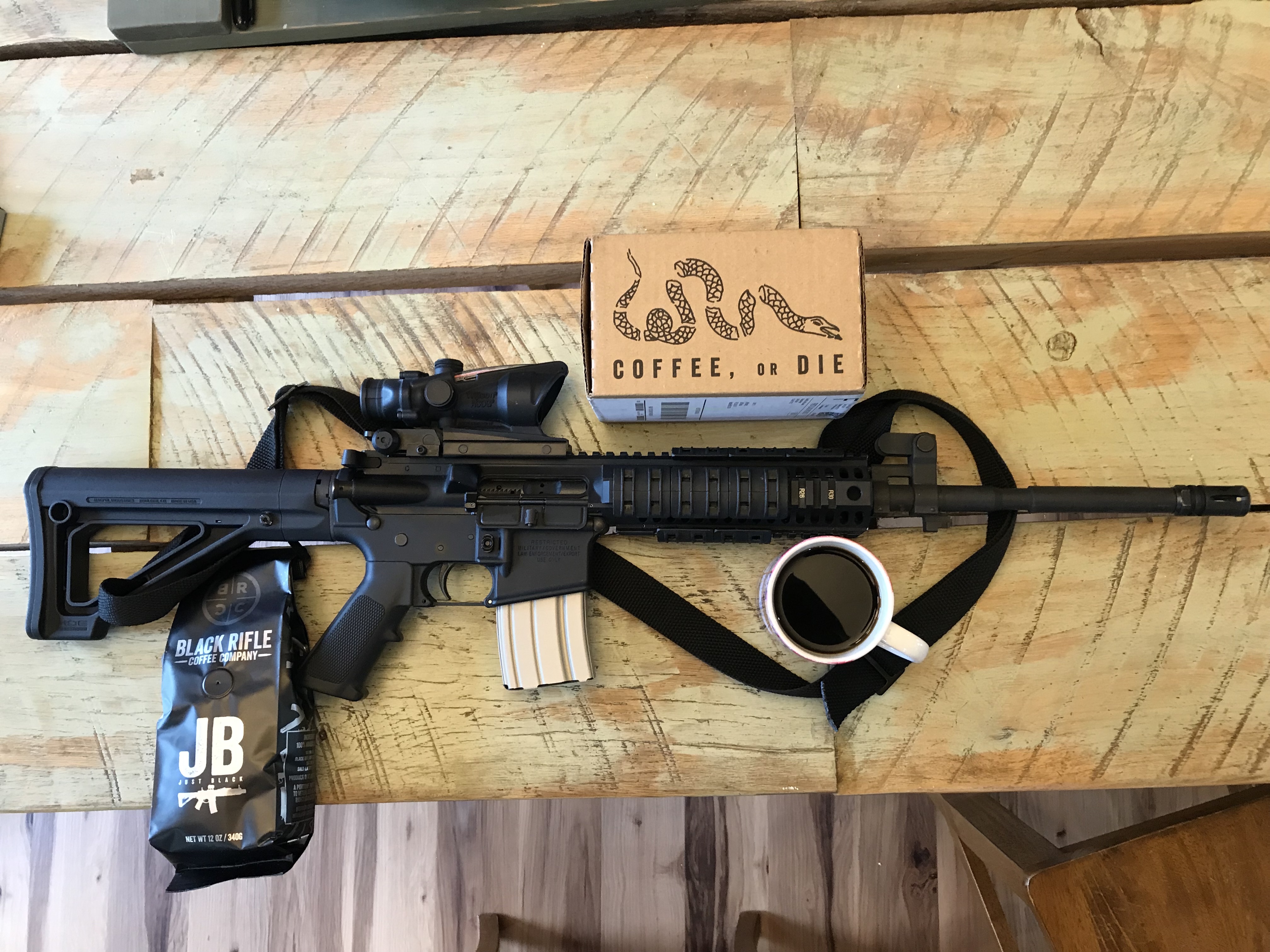 cool, I have one on my 224 valkyrie . by the way if your looking for a sun shade I figured out shade on my Bushnell dmr2 threads right on the weaver .
Reactions: army_eod
S 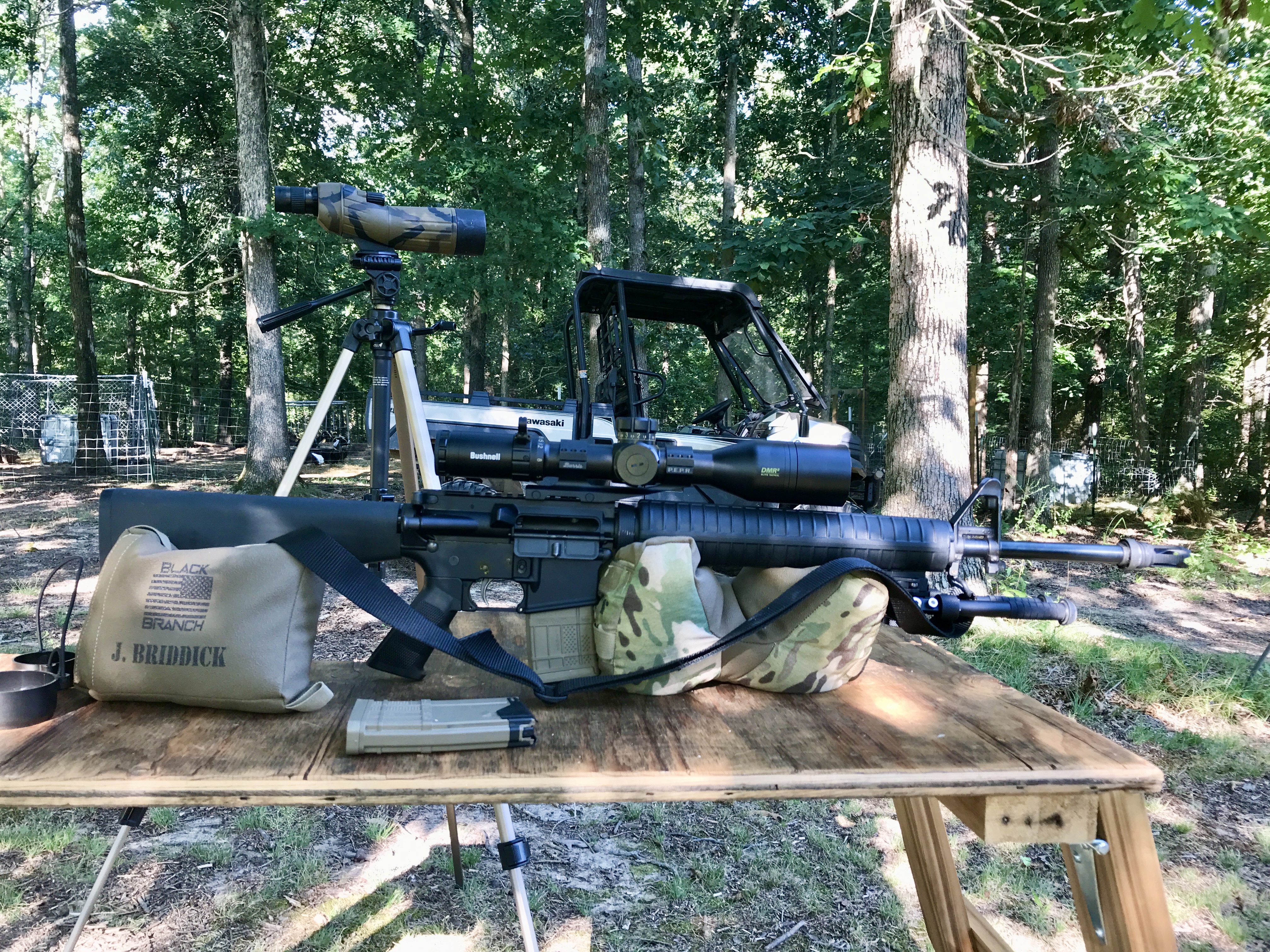 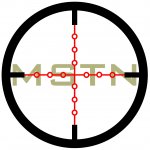 Why do you prefer the Tailhook over the SBA-3? Planning a pistol in the future at some point and am currently set on the SBA-3.
S

LOL...sudden'y I feel so inadequate.

I do also like the SBA3 and use it often in custom pistol builds. It is light in weight and reasonably priced. My only issue with it is the toe of the SBA3 stock seems to become more pliable with regular use. This for me presents a problem.

There's a heavier replacement strap that may help solve that issue:

The Gear Head Works brace is as rigid as any normal buttstock. It also has a slightly longer drop at the toe, too, than other braces, which I personally like for my own man/machine interface.
Reactions: powdahound76, PBWalsh and AMGtuned
S

My newest, and my new go to rifle for anything.
8lb 5oz with no mag. The ADM TA31 mount is very nice as it allows me proper eye relief without sacrificing ergonomics. Looks kinda silly, but it works out great for my body. Just waiting on my Cloud Defense LCS to ship now.

Really happy with this rifle so far. Only thing to do now is burn this barrel out. 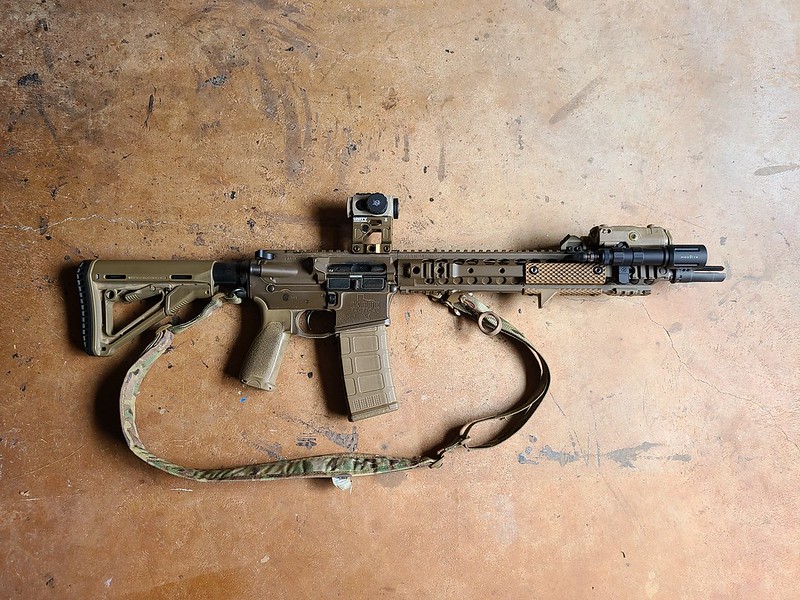 " I essentially wanted a shorter SPR style rifle. "
Do you think you got it?
Beautiful rig, I must say!

gemihur said:
" I essentially wanted a shorter SPR style rifle. "
Do you think you got it?
Beautiful rig, I must say!
Click to expand...

Thanks man! Yes, I feel it’s a good balance. The ATACR 4-16 is overkill, but I wasn’t comfortable with the NXS 2.5-10. The 4-16 has the Mil-C that matches the 5-25 on my AI...OCD is satisfied. Below is a 5 shot group with factory Hornady match the first trip out. Shot 4 wasn’t included in that measurement. I always manage to throw shot 4.

I can't beat that. Excellent group!
My AR is an Anderson build in 6.5 Grendel

I suppose I miss the warmth of wood ...

Doesn’t fish well with others

Shit brown aluminum and FDE furniture is where it’s at. I’m waiting to have my 6.5G build complete before I post pictures. Same colors

Latest upgrades to my do all rifle. Burris 1-8. Lother Walther barrel. One of the last made by Woody. Shoots everything I throw through it 1/2 Moa or better. 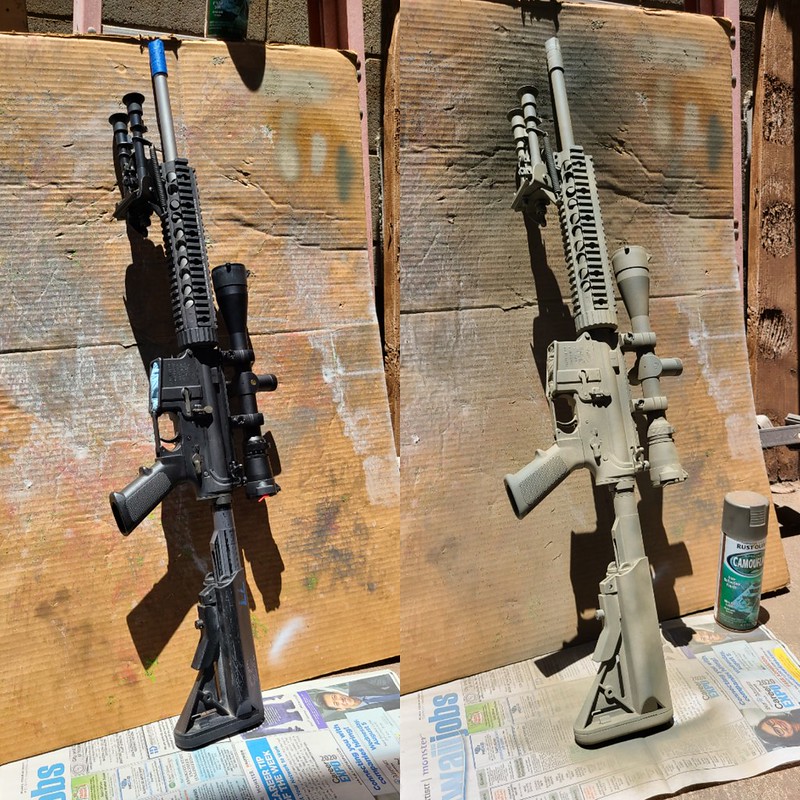 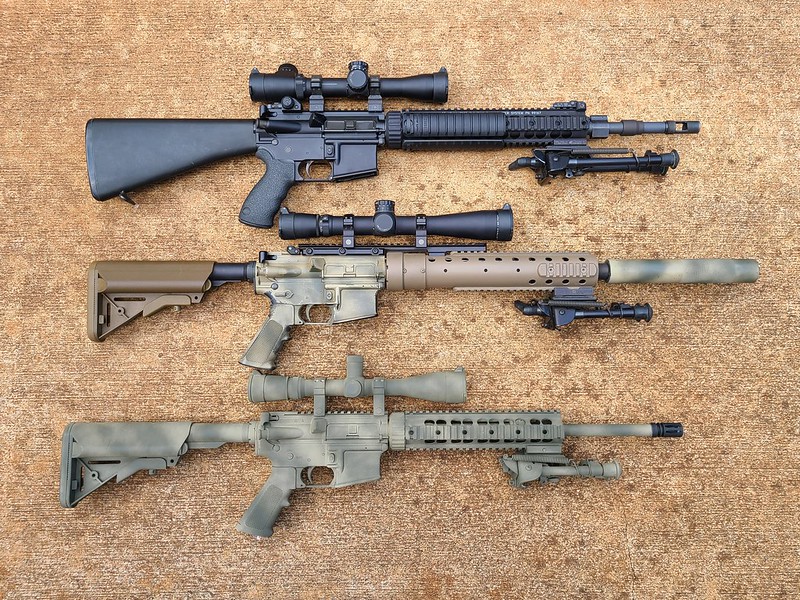 I've got a 2007 vintage MK 18 clone with a very special Noveske SS barrel of which I'm very proud. John Noveske was kind enough to make a special run of 10.5" and 16" SS barrels with super-small gas ports for suppressed use only. This was well before the successful introduction of compact, easily adjustable gas blocks, bolt carriers, etc. This was our best effort to optimize a MK 18 for suppressed use. John nailed the size from the start, having more experience that anyone in this area, after perfecting his Switchblock about a year prior.
This upper ran suppressed full auto at the perfect 725 RPM and drops the brass in a nice pile at 3:30. With nice optic, match grade ammo, and a bipod, it would turn in very respectable sub-MOA groups, as well. Much less gas blowback than I was accustomed to experiencing.
Time has passed. I upgraded the recoil system to a Vltor A5 when they came out, threw an Elcan Specter DR on top, replacing an old Comp M3, upgraded the Surefire FA556-212 to a SOCOM RC and then a SOCOM RC2. But, it was still the same old standby. But looking rather dated and seeming kinda heavy at 11+ LB ready to rock.
Then, a friendly enthusiast offered to buy both the DD MK 18 rail and the Surefire SOCOM RC2 from me. So, the old MK 18 has lost 1.5 LB by transitioning to a Geissele Mk 14 9.5" rail and a TDS Badger II 5.56 suppressor. I decided to add a little dazzle dazzle with a new Surefire M340 Mini Scout Light Pro, as well. Love their new mounting system!

My Mk18. Have since then replaced stupid pressure switch with a proper surefire double switch.

Obviously not OP, but it looks to be the older version of the Ferro Concepts Slingster.

Teach Me Sensei sniffed my neck

Walked into LGS and saw this the other day. Figured I’d give it a try. ElftmannTactical pushbutton safety for the AR platform.

How much? What does the install entail?

Jefe's Dope said:
How much? What does the install entail?
Click to expand...

It was 39 bucks plus NCs share. Installs like a normal safety on the same detent. I played with a gun he had one on while I was there and it seemed pretty easy and comfortable, so I put one on my bench gun to try.

Teach Me Sensei sniffed my neck

waiting on some RailScales and Cloud Defensive OWL yet
Reactions: powdahound76

Bought some 22LR stuff to shoot for cheap. 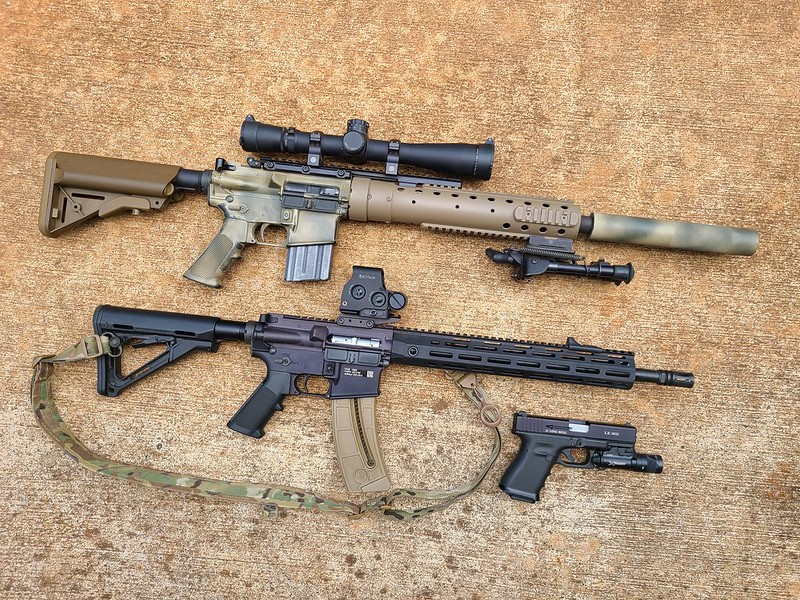 a 22 AR is a hoot
I built a .22 upper.
Can fits beneath the 8” HG, so when combined with 4.5” barrel it doesnt stick out very far at all.
combined with a red dot and the fast trigger, its so insanely fast to put 3 rounds into a nice group out to 50 yds
Reactions: Jefe's Dope
R

Here's the 20" gun. Glass will be a strike eagle 5-25 relatively soon. Taken this to 1,000 a few times and it is becoming one of my favorite rifles. Criterion hybrid, ssa-e, BCM upper, aero lower.

Some where in the US

Animal357 said:
Why? The thumb selector is perfectly functional
Click to expand...

Why is such a terrible question. Mans gotta explore and try things from time to time, or he gets stuck in a rut called life.
Reactions: Sandhog308

Animal357 said:
Why? The thumb selector is perfectly functional
Click to expand...

But for my learning pleasure, explain to me “why not”.
R

roostercogburn98 said:
But for my learning pleasure, explain to me “why not”.
Click to expand...

Not the guy who posted it, but, I can see that being an issue during weapon manipulations when going from safe to fire to safe doing target transitions/moving and stuff like that. Getting it off safe seems fine, getting it back on seems like an ergonomic nightmare.

If it works for you, right on.
Reactions: Shooter McGavin

rybe390 said:
Not the guy who posted it, but, I can see that being an issue during weapon manipulations when going from safe to fire to safe doing target transitions/moving and stuff like that. Getting it off safe seems fine, getting it back on seems like an ergonomic nightmare.

If it works for you, right on.
Click to expand...

So original context for use is not being taken into consideration here. This gun sits on a bipod and bags and gets shot off a bench. It has a 3.5-21 power scope so “transitional” shooting is not what it’s designed for. I have done my fair share of CQB style shooting and honestly don’t think this would have any real negative impact compared to a traditional safety selector. Small handed fellas have always had to come off the grip some to manipulate those setups as well.