As someone who writes mathematical models for a living, statements like "superior" need quantification. Is one faster? Does one give better answers?

Example: Language Model, BERT came out for artificial intelligence and everyone raved about its "superior performance" Actually in measured tests it was maybe 2-3% better accuracy wise on standard tests, but required less hardware, but was also a bastard to get running. It was also complex as hell to understand. So everyone was "I WANNA BERT MODEL!!!" Meanwhile, I can get 97% of iter performance with a 50% smaller model than I can setup in a few hours.

I have limited use of both AB and 4DOF and I don't explicitly know their solvers, but I do know that the solvers are 'old' by mathematic standards as far as I know (these days 10 years is old...). But then again, lots of things are old--they still can be VERY useful.

So until someone can say 4DOF solves this in X Flops vs AB in Y flops, or 4DOF has X% error vs AB Y% error, its all just personal opinion. (and that is why there are standard performance tests for software).

Then there is that whole Betamax vs VHS deal...but consumers are a bitchy fickle bunch.

4DOF is nice.
AB is nice
I really wish I wouldn't have to keep buying AB for every stupid device though...that's rather irritating (but not performance based).
H

TacticalDillhole said:
4DOF (on mobile) also requires an internet connection. So if you are in bum fucked Egypt you are just fucked 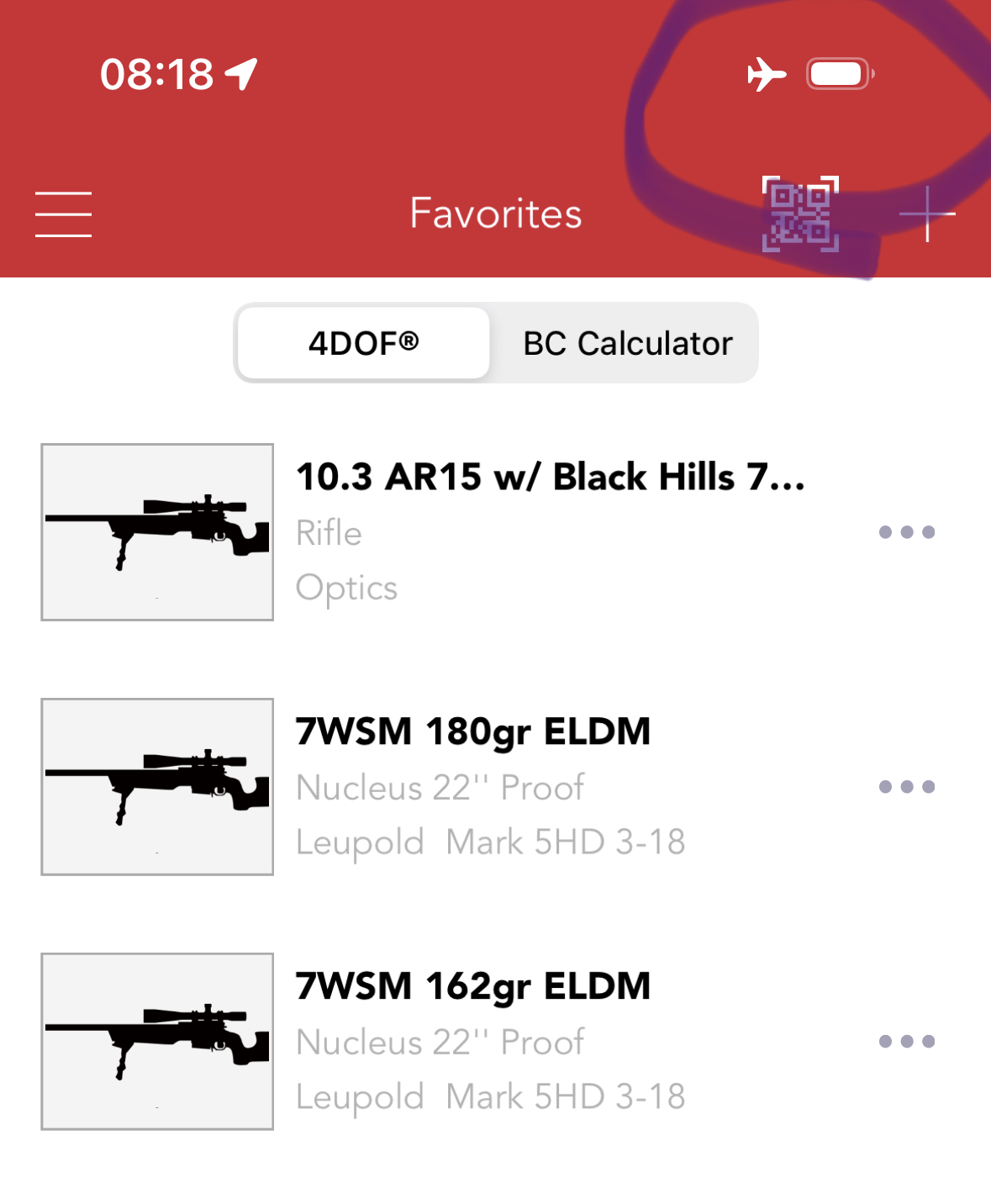 I use both AB CDMs and 4DOF interchangeably… If you’ve used both tools correctly, and you’re comparing apples for apples (ie same settings like AJ, spin etc) , they are *very* rarely more than 0.1mil apart at 1000yards.

I’d therefore say the major takeaways for me are;

1. We don’t know/can’t say whether CDM vs 4DOF is “better” from a model perspective. They both appear to do the same fundamental thing, which is: have some form of model based on the specific projectile, not a comparison to the G7 projectile. I’d love to see someone do a stat sig test one of these days… my money would be on “no significant difference”
2. 4DOF is free and AB is crazy expensive.
3. I see a lot less screw ups with 4DOf. It’s simpler.
4. 4DOF has less choice than AB (eg the 4DOF kestrel has restricted functionality, less projectiles in the library).

There is nothing wrong with going with the free 4DOF and if you’re starting out… why on earth would you start anywhere else?

There’s also nothing wrong dropping the extra coin on AB… just know you’re paying a lot for not much difference and most people could go without.
Reactions: stanley_white

This only makes since to a point. I understand how you can make a solver match your real world data but that is in an effort to then ultimately make hits on targets at various distances under various environmental conditions for the first time after that. Hence the question which solver is better at that.

This would be an exercise in futility if you just shot at long range to then make your solver match your real world data. What's the point? Took me 5 rounds to get a hit on a target then i made the solver match the real word data? Hell even if you hit the target the first time but then have to adjust your solver to match. The point being once its trued in whatever mechanism that is for either solver which is the best after that?

Think about it this way. If you trained 10 snipers stateside. Then sent to Afghanistan what's the best tool/solver for them to get extended hits in the new environment..... hornady 4 DOF or Applied ballistics? Hell even if you true up while in Afghanistan with solver what is going to give you the best solution tomorrow on a first round engagement?

While i understand a goal initially may be to get your solver to match your real world data but the real goal of that is really so that it can give you accurate predictions on engagements you haven't taken yet.

If your only goal is to make your solver match your real world data after the fact a ballistic solver is useless.
Click to expand...

If you set it up correctly, use zero angle instead of a regular zero, record the zero angle environmental data, and lastly set the correct axial form factor, Hornady's 4DOF should work in Florida at 50 ft elevation just the same as in Afghanistan at 6000 ft elevation in the winter without having to true anything....

TacticalDillhole said:
4DOF (on mobile) also requires an internet connection. So if you are in bum fucked Egypt you are just fucked

Bryan Litz was recently on Erik Cortina's podcast and discussed some of what they are doing with their cdms.

And he just had Hornady guy on as well

longrange772 said:
Bryan Litz was recently on Erik Cortina's podcast and discussed some of what they are doing with their cdms.

Yeah it was an interesting discussion. According to both organizations, AB’s CDM and Hornady’s 4DOF are derived from Doppler radar. AB has a write up here: https://appliedballisticsllc.com/sl...all-arms-improving-on-ballistic-coefficients/

It’s good to confirm as I believe that AB used to use multiple inline chronographs not Doppler to create their original CDMs, but switched to Doppler quite a while ago now.

Sorry one other thought… so basically hornady is giving away for free the equivalent of AB’s CDMs.

I think that’s the major point about 4DOF. If they have your bullet, it’s way better than G1/G7 and CDMs cost money.
Reactions: kindabitey

CaylenW said:
I was using it before I was "sponsored" because I saw the benefits of it.

You're right, to each their own, but I'm in the business of education, so that's what I do. I've got no dog in the fight either way.

Hornady doesn't pay me, or MDS. I shoot their bullets and I promote a solver that's beneficial to the community.
Click to expand...

Off topic and just curious if Hornady does not "pay" you then what are the benefits of being a sponsored shooter? While I was not paid in money when I was a sponsored shooter I was nicely compensated in ammunition and components which, I in turn, did have to declare for tax purposes, and is in fact considered payment. Has that changed within the industry now? Maybe I need to look into some senior class sponserships!
M

Halcyonhal said:
Sorry one other thought… so basically hornady is giving away for free the equivalent of AB’s CDMs.

I think that’s the major point about 4DOF. If they have your bullet, it’s way better than G1/G7 and CDMs cost money.
Click to expand...

If you shoot hornady, then yes. If you need the option for one of the plethora of other bullets that AB has listed that’s NOT hornady though….

I think 4dof has Sierra, Berger, lapua and like two others and are limited on projectiles for those.

DocRDS said:
I really wish I wouldn't have to keep buying AB for every stupid device though...that's rather irritating (but not performance based).
Click to expand...

Why do you need to buy AB with all of your devices? I only have AB app, and only use Kestrel without AB to gather environmentals as input into the AB app.
D

amymorgan20 said:
Why do you need to buy AB with all of your devices? I only have AB app, and only use Kestrel without AB to gather environmentals as input into the AB app.
Click to expand...

You don't but now its included on most top end devices--and since I already have it on my kestrel....
Show hidden low quality content
You must log in or register to reply here.

Is Hornady ELD-M BC wrong in Kestrel Applied Ballistics?