Anyone else 'true' their 22lr to their centerfire? I was thinking about getting some 1/4 scale IPSCs to play with. I found some nice ones online, with center cut outs, but I lost the website.
Reactions: Tx_Aggie


Sent from my Nexus 6 using Tapatalk

So here is what I did. I started with my 40X and got my dope out to 250m. Then I used my R700 ACC 18inch with FGMM 7.62-175gr and shot out to 500m. My Labradar gave me velocities and I put them into JBM and got data out to 1000m for the 762. I am pretty bad with JBM, so anyone that could suggest what their real come ups for I would apprecriate. Also dope for other bullet and velocity set ups out to 1000 would be interesting.

So what I did then is put that data into Excel and started playing with it and made the table below.

So the blue data is the 40X and the Red is for 762. I lined up the data so that the come ups matched, or at least were close. I tried to do it mathematically, but that made my head hurt. I then calculated how big and IPSC target would be in the scope of the 762 for all those distances and then used that to calculate how big a target would have to be to appear to be the same size at the corresponding 22LR distance. I then calculated how big that target would be. For under 90 yards there isn't good correlation, but past 100 the ratio of target sizes falls to about 0.24. So an IPSC target will see the same MIL (not actual distance drop in in/cm) drop when viewed through a 22 or 762 if the distance is 1/4 and the target size is a quarter.

I started looking around and found that MOA Targets makes 1/4 scale IPSC targets. So I contacted them. They were great to work with because I wanted to do something besides just 1/4 scale targets, I wanted reactive targets.

I emailed back and forth with Mitch at MOA and they put a 1.75in (IIRC) inch hole in the targets. The targets have two bolt holes so I figured I could hang a flipper in the back. Since a lot of 22lr targets and targets in general get hung by straps, I wanted to avoid this since hits on the supports often can make calling hits difficult. MOA has a cool set up where they have a bracket and tab system to use a simple 2x4 post as a stand.

Got that targets in, cleaned and painted them. I had some issues getting the rear flipper to place. Mitch had send me some round gongs with holes to try to work out. I could get them to hang, but because of the size, I was having issues with getting them to flip and reset as I played with them on the bench. I had an old 2 inch gong with a single hang point. I used a three link segment of chain hang this from the two mounting holes. Viola.

The second pic shows better how the bracket would hang on the 2x4 and the flipper covers the hole.

Went to the range and set it up at 125m and started to take some shots with my 40X and 455 and Dave had stuck around after the match to work up a new 10/22 so he smacked it up good to.

The loud chuckle he let out the first time he hit the flipper put a smile on my face.

I like the target because it is:
-Pretty easy to hit
-The flipper gives a more refined/defined target and instant feedback. It really flips out of the way and went back in place after about 30 hits
-Gives a big rifle type feel to PRS type trainers

What I'd like to work out more is the exact size and range relationship. Taking the 40X and 762 out and getting more refined range data and also see how wind interplays. By the JBM calc, the wind holds are about the same.

The tweaks to the targets:
-1/4 steel targets: I had these done in 3/8 thick since I planned on donating them to the 22 portion of the silhouette range and they might stand up better to damage
-Optimized hole placement or gong/flipper design. Shorter neck on flipper bolt hole nubbin would work.
-Smaller bolt holes for smaller screws for smaller link chain for more degrees of freedom on movement.
-Why are 2x4s long face to the targets? It seems that having the short side to the front would work better for 22 by reducing surface area. That would reduce the chances of wood hits being mistaken for edge hits.
-Shorter tabs with small hole for bolt to keep target on mount. Just reducing the metal target surface that might be mistaken for a hit.
-Want to see if the lighter target would make face hits easier to see or if some kind of hit-tattle is needed.

After the work out:

Thanks to Mitch and MOA Targets! They were super easy to work with and I really appreciate their support for and willingness to work with my insanity.

Will not be controlled by a Kidd trigger!

Big Dog Steel makes a 25% IPSC with a hinged flapper:

This is crazy.
F

I reworked it a bit since the chain set-up only worked if the bolts weren't tightened. Plus, I was worried about the flipper catching on the bolts. Set it up now with some belt I have. Haven't shot them yet, but they seem to do pretty well. Just need to make sure the 2x4 post is short enough not to impede the flipper.

Hoser made some good comments and I have a second version bouncing around in my head. Should make it easier to see hits on the front face and post on a metal fence post. Might donate these to my home range to see if they want some 22 dedicated steel. The faces are 1/4inch, so I think given 100 yards or so they might even stand up to 223 if someone is a dumbass- and by how the steel at the CRC gets ripped up, there are a lot of idiots out there. One flipper is 1/4 inch thick, the others are 3/16. The next design will put the belt behind the target flipper so there is less spall damage to the belts.

I've been toying with a gen 2 of the targets. I like the simplicity MOA Targets 2x4 mount and tang, but a 2x4 is overkill to mount to, plus I want to minimize the problem of misses hitting supports and bouncing the target.

What I look for in a 22lr target is:
-Every shot gives feedback. I don't think there should be any 'misses', you should be able to read every shot. Hits should give clear, positive and direct feedback.
-It should never wear out.
-It should be cheap.
-It should be simple. No tools or bits to set up in the field.

This design fits on a standard fence post and is plate & holes, no welded parts. 1/4 inch steel. 5/16 carriage bolts.
1/4 scale design.
The front face is hung on one bolt with a spring (brownish cylinder) so to have some give and allow it to pivot show left/right hits.
Center 1.75 hole which is the 'real' target.
A 1x2 lumber should clamp between the back post plate and the fence post, so you could staple a piece of cardboard behind the target for even more miss indication.
Still looking at the center swinger. Round with a hole in the center or a round with a tab with a hole in it to hang it either with three links of chain or some belt. (The chain gave nicer action than the thicker conveyer belt, but I had the belt was in a 'tight' twist config. I think I can rig it to give more play.)

So the potential for feedback on big misses, near-hits and a satisfactory action on hits. 1-3/4 inch main is a little big for close in stuff, at most gun/ammo/shooter combo limits at 100m and a nice challenge from 150-200m.

*** No laughing at my CAD skills. Tinkercad and I have an understanding. 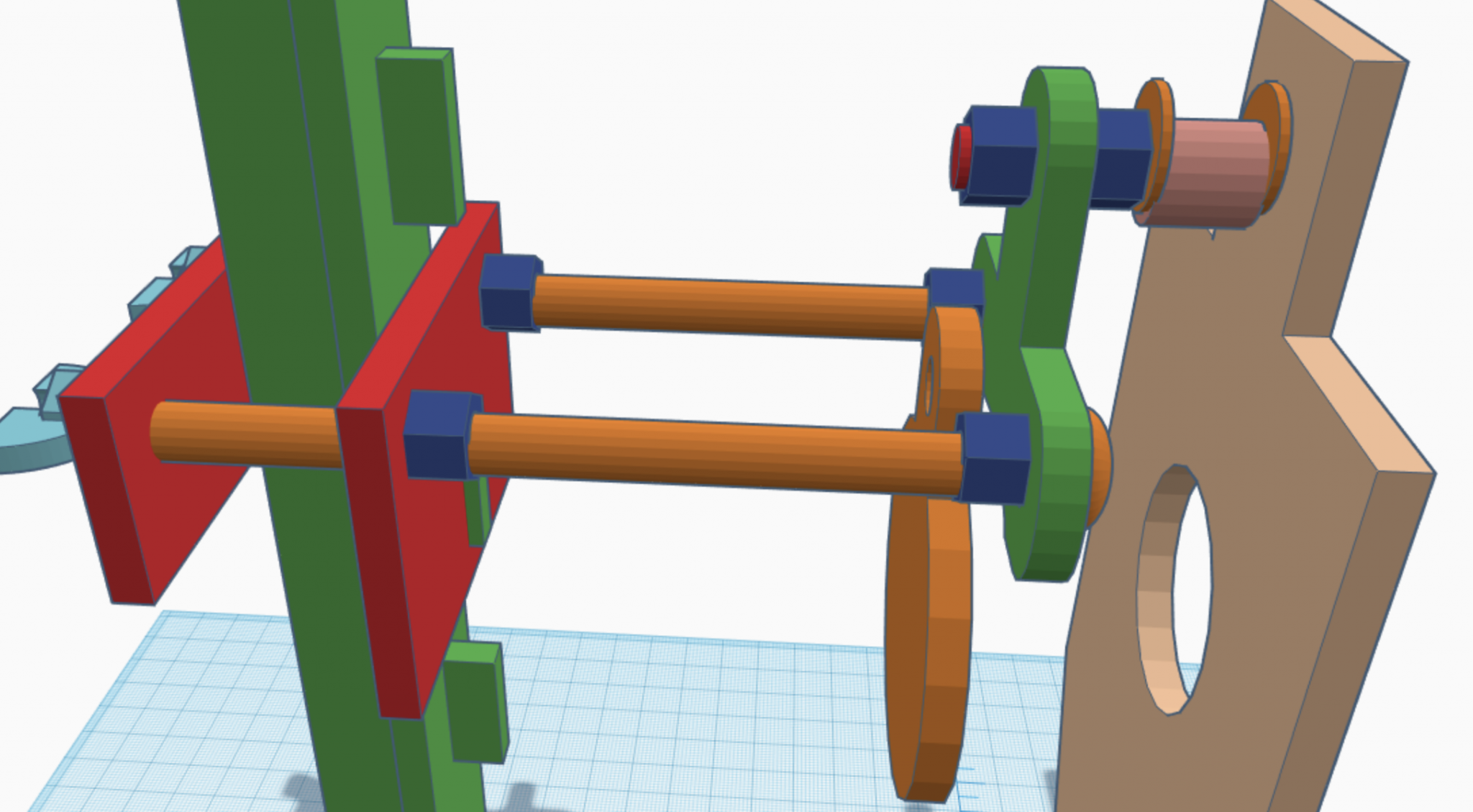 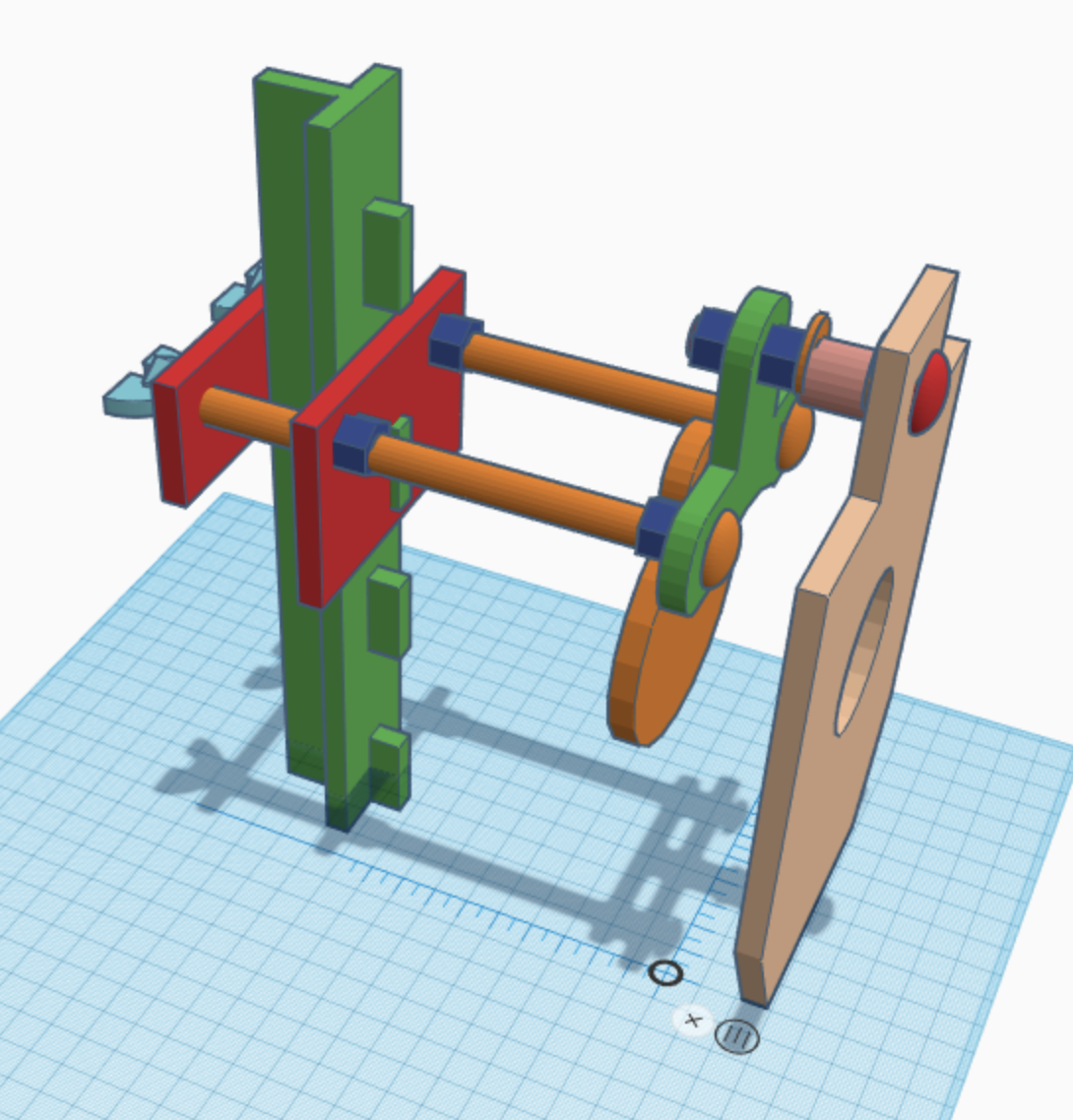 That is what I need to talk to Mitch at MOA about. Remember, these a small, like hand size. The bolts and nuts are probably the expensive part. All the parts are standard flat 1/4 steel. Only takes about 2/3 of a square foot of steel, but I don't know how the number of cuts drives costs.
Show hidden low quality content
You must log in or register to reply here.
Share:
Facebook Twitter WhatsApp Email Share Link
Top Bottom